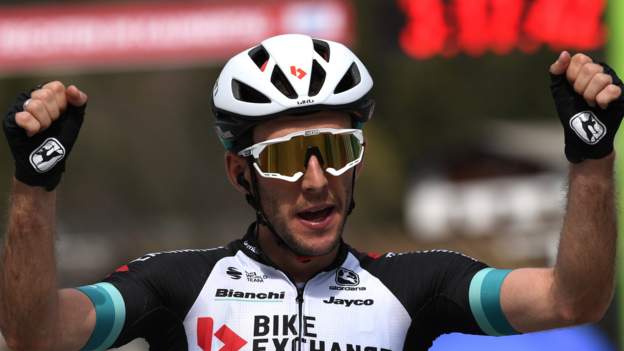 Britain’s Simon Yates has taken the overall lead of the Tour of the Alps following an impressive victory on stage two.

Yates, 28, of Team Bike Exchange, left behind his rivals after launching a devastating attack with 24km remaining.

He now leads Ineos Grenadiers’ Pavel Sivakov in the general classification by 41 seconds.

“They weren’t easy to get rid of – it was a very tough climb,” said Yates.

“It really took it out of me on the valley road to the finish. I enjoy these stages – we race from the start rather than messing around for 150km.”

Britain’s Hugh Carthy of EF Education-Nippo finished one minute 17 seconds behind Yates, and now has the same deficit overall.

Following Gianni Moscon’s win for Ineos on Monday’s opening stage into the Innsbruck, the race moved onto higher ground during Tuesday’s 122km run to a snow-covered Feichten im Kaunertal.

Yates even gained 15 seconds on his lead on the descent from the category one climb where he made his break for the win, before finding more time in the final few kilometres.

The Mancunian rider has struggled for form in recent races, but appears to be coming good before his bid to win the Giro d’Italia, which starts on 8 May.

Here he showed the kind of strength his twin brother Adam has displayed for Ineos this season – so far being the strongest British rider, winning the Tour of Catalunya.

Four-time Tour de France winner Chris Froome is also competing in the Tour of the Alps but rolled in nearly 15 minutes down on Tuesday, in support of team-mate Martin, as he looks to try to build form for this year’s Tour on 26 June.