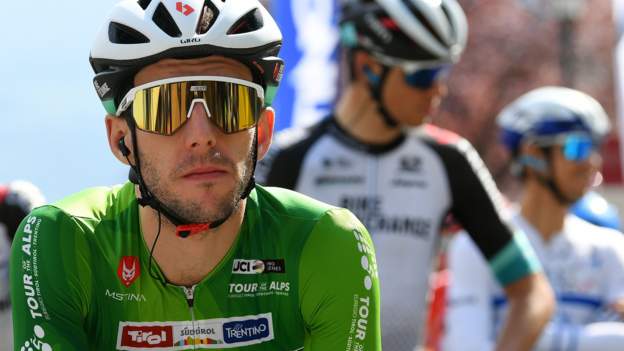 Britain’s Simon Yates has extended his lead in the Tour of the Alps after finishing third on stage four.

The Team Bike Exchange rider outlasted his rivals on the final mountain climb toward the end of the 169km stage to Pieve di Bono in Italy.

But he was joined on the final descent by Pelle Bilbao of Bahrain-Victorious, who won the stage, and Aleksandr Vlasov of Astana Premier-Tech who came second.

Yates, 28, remains in the green jersey, with a 58-second lead over Bilbao.

“It was a hard start – the team controlled all day,” said Yates. “I tried to win for those guys today but I found a faster guy.”

Bilbao, 31, chased down and caught Yates and Vlasov on the descent at around 3km remaining with a searing pace, taking several risks on the steep corners of the Alpine course in near Trento in northern Italy.

Britain’s Hugh Carthy, 26, of EF Education-Nippo, finished sixth on Thursday’s stage, one minute and six seconds down, and is two minutes and 37 seconds behind Yates overall.

Four-time Tour de France winner Chris Froome spent much of the day in the early breakaway, showing signs of improved form before the Tour begins on 26 June.

Froome, 35, is more than 40 minutes down in the general classification, but is racing in support of team-mate Dan Martin, who crashed on Thursday’s descent and is now four minutes adrift overall.

Stage winner Bilbao dedicated the stage win to former Astana team-mate Michele Scarponi, who was killed in a training accident four years ago on 22 April 2017.