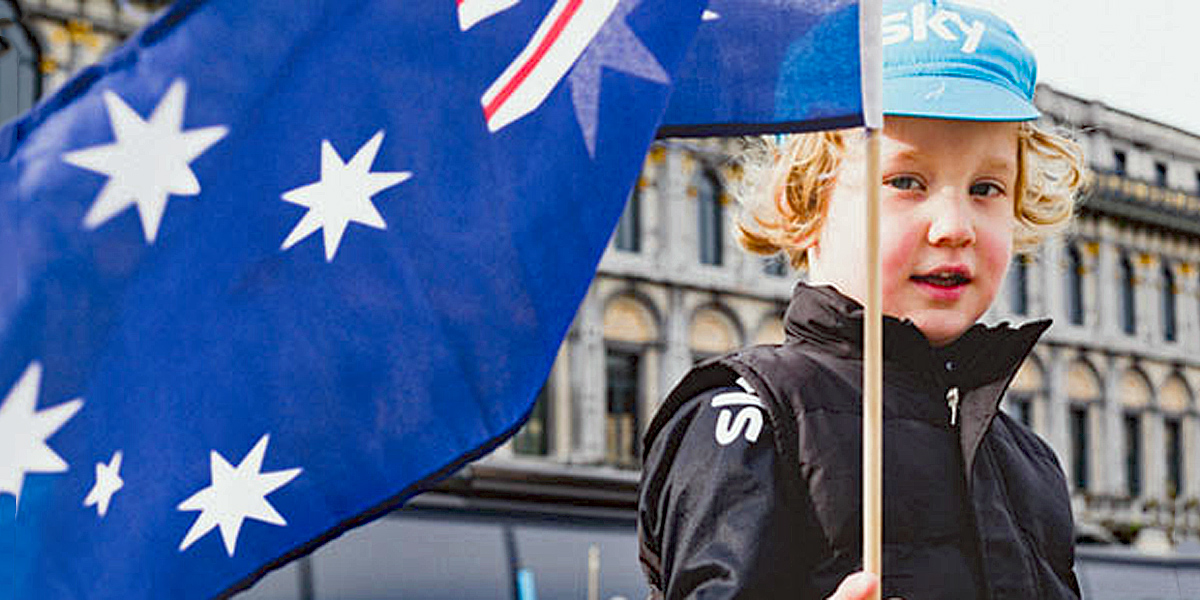 PEZ Photog Wei Yuet Wong rounded out his month-long Classics’s adventure of 2014 by shooting Liège-Bastogne-Liège, the oldest of them all, as the finale of his trip. Here are some of his favorite photos of the day… 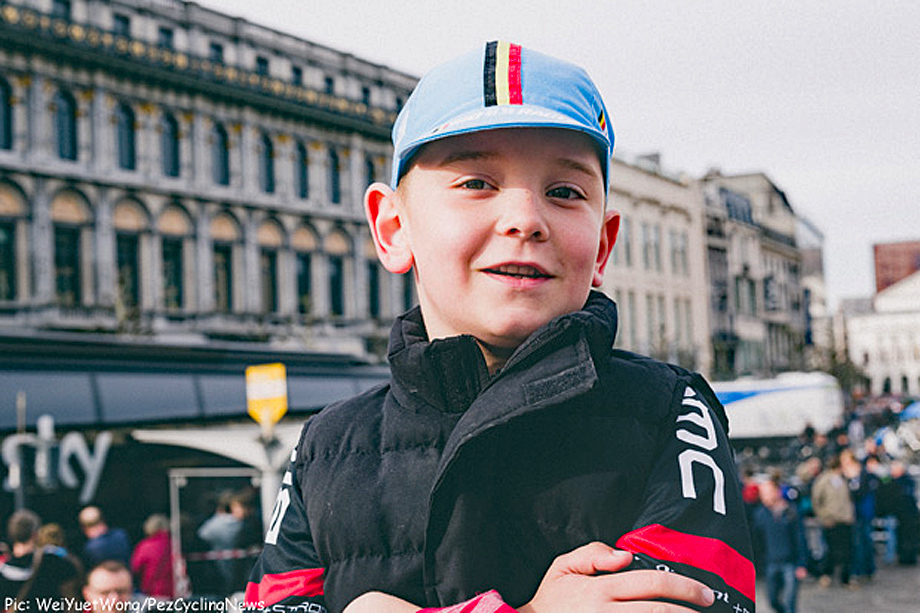 If possible, I try to go early to the start of the races. It’s interesting to see empty streets, the sleeping town slowly get to life, and the organisers, marshalls and police already preparing. 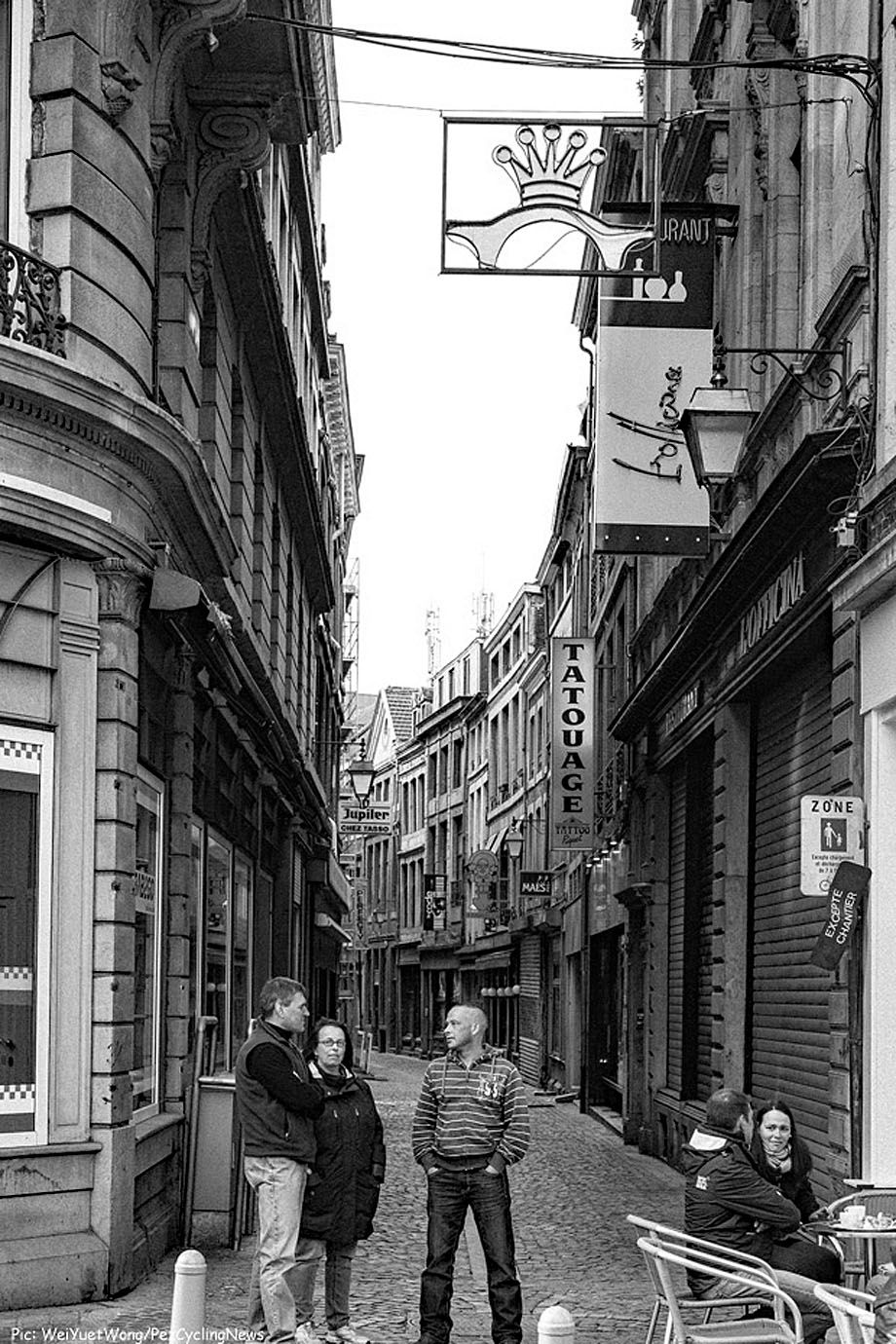 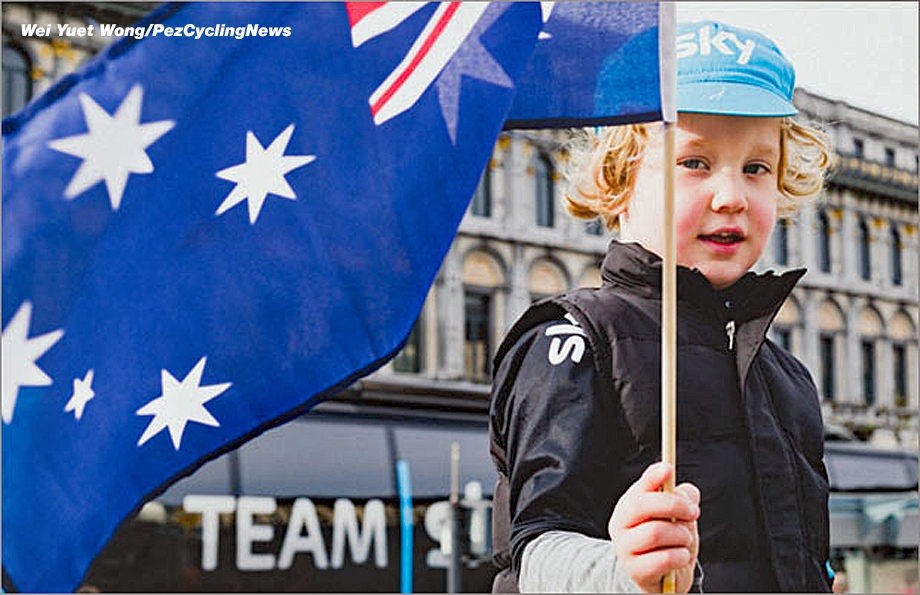 At Liège, I saw two boys waving an Australian flag so I decided that I would start with them. Darcy is the Team Sky fan, and Oliver is the Team BMC (and Cadel Evans) supporter. Their mother admitted that there is some friendly rivalry going on in the family. They are from Adelaide, and it’s a long way to travel to catch the races. From here, I went with the Australian theme… 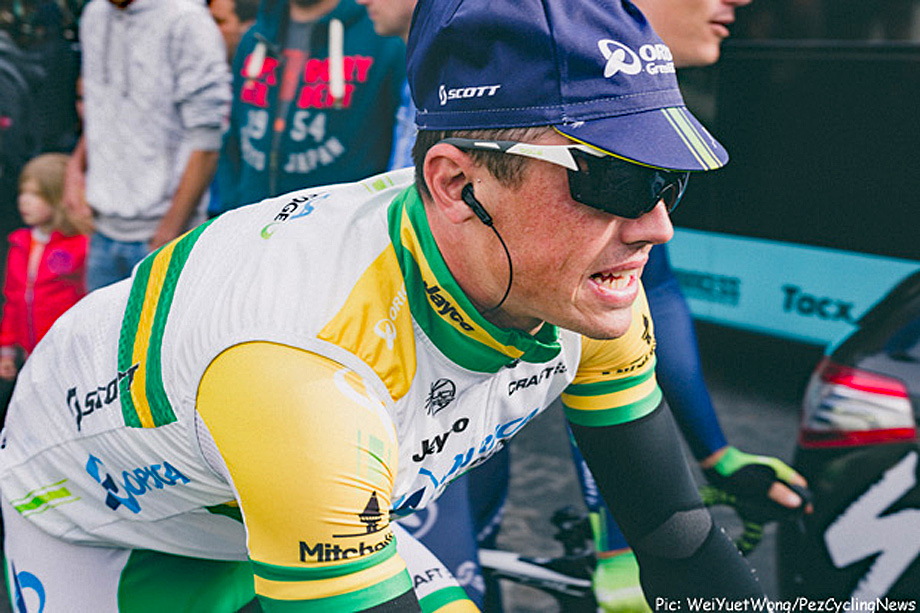 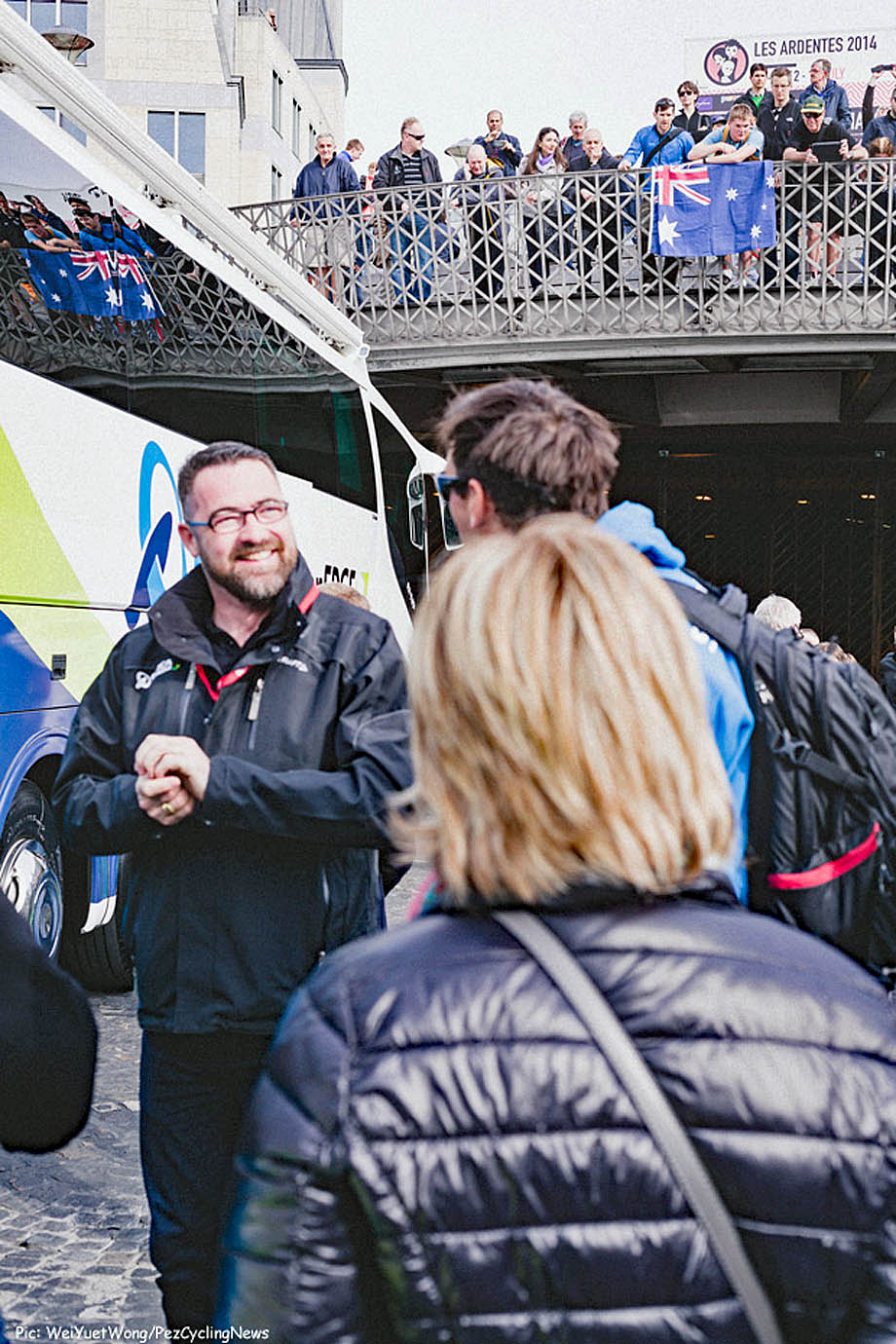 That led me to looking for the Australian riders. A quick glance at the starting list showed an impressive line-up of Australians – Jack Bobridge (Belkin), Nathan Haas (Garmin-Sharp), Ritchie Porte (Sky), Michael Rogers (Tinkoff-Saxo), and of course the Australian Orica-Greenedge team. Even before his win at Liège, I felt that Simon Gerrans had been doing very well since joining Orica-Greenedge. It looked like he found the right place, and was achieving a lot of what he said he would be capable of. It goes to show that there is such a thing as “being in the right team”. There’s magic in that. 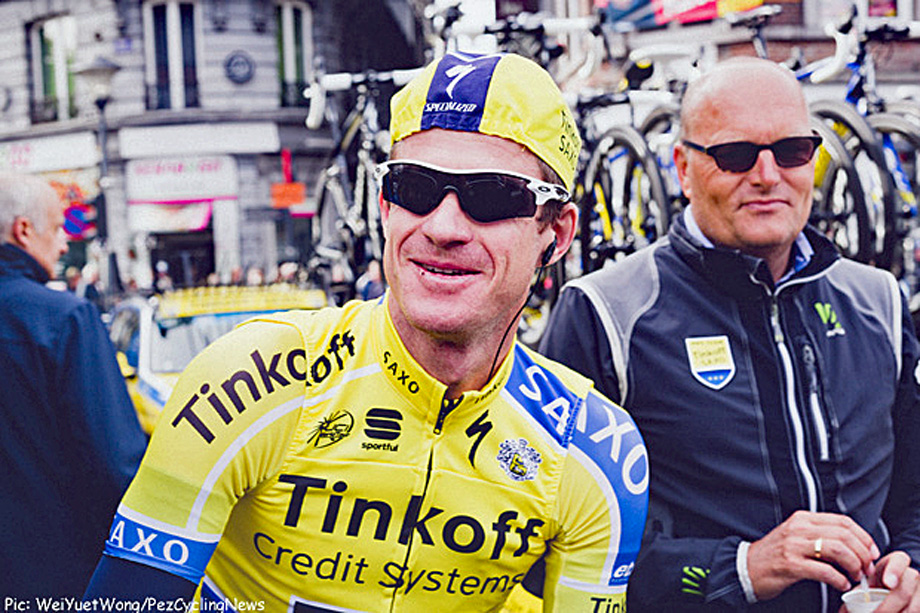 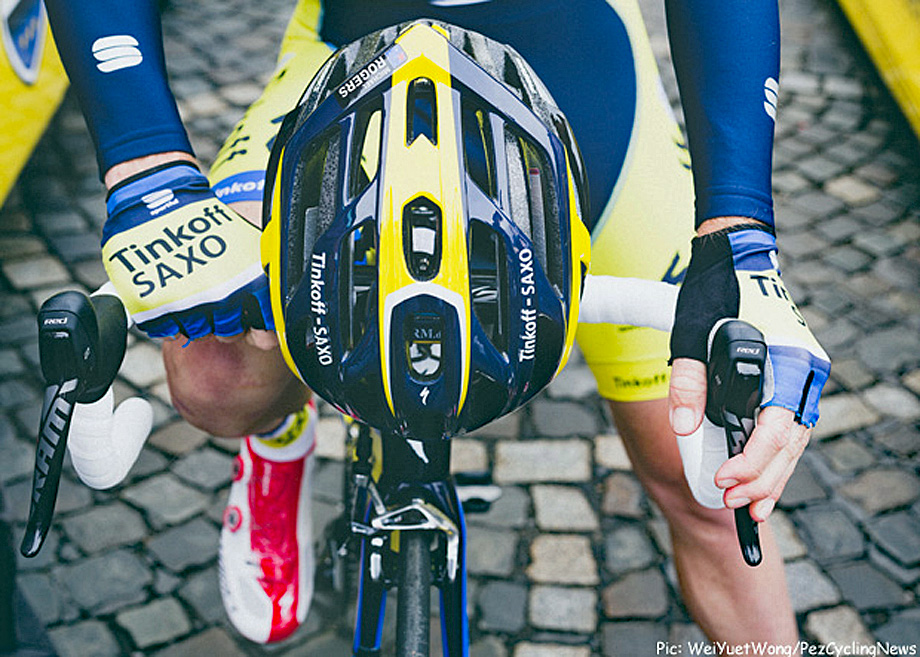 I was talking to a Japanese journalist (Ms. Sasaki) while waiting for the teams to arrive, and we talked a bit about Michael Rogers being cleared to race again. The Japanese fans are interested in Rogers because he tested positive at the Japan Cup in 2013, and he was stripped of his win. I was again in luck when I casually walked towards the Tinkoff-Saxo bus, and, there he was. No crowd, just Michael Rogers and Bjarne Riis. A Russian journalist said to Rogers, “We are happy that you are back.” When I look back at the pictures I made, I was surprised to see Rogers and Riis smiling, because I heard before that they are not the easiest people to make pictures of (tell me if I am wrong…). 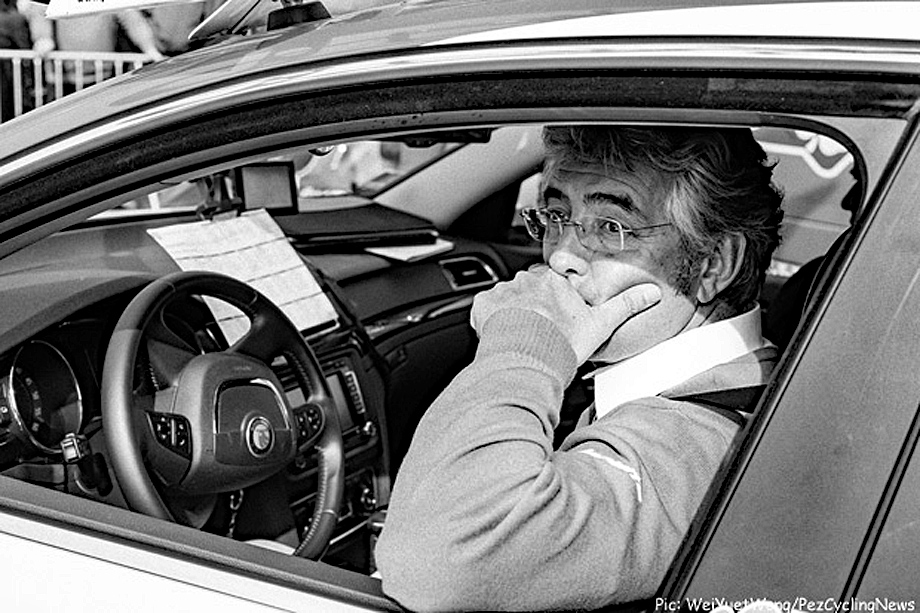 Another person that has quite a fearsome reputation is FDJ DS Marc Madiot. He’s one person that you do not mess with. So, it was more surprising for me that I managed to get this picture of him looking kind of amused. He was waiting for the start, and the team cars were all being lined up behind the peloton. When I was done with my pictures, I waved a little “thanks” to him, and he even acknowledged it. Wow… 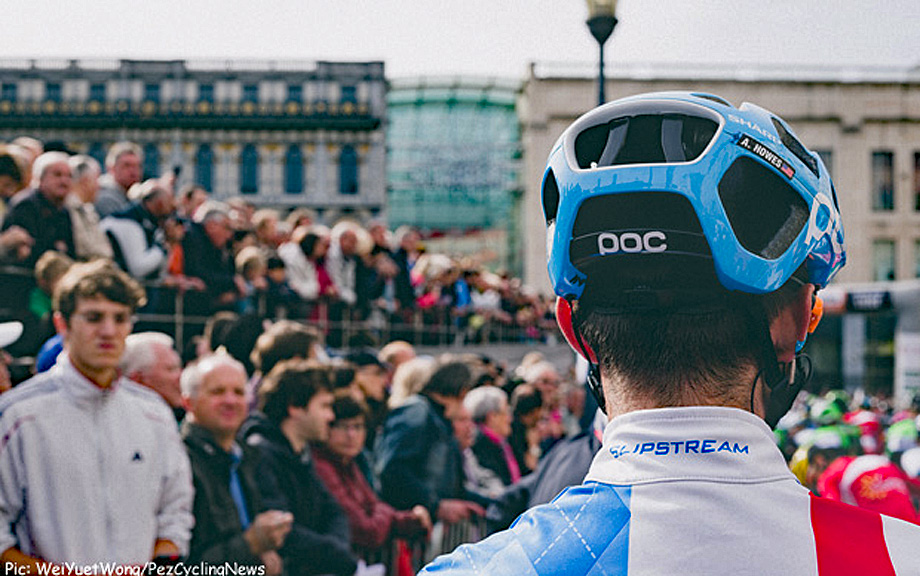 I can’t really explain why I like this picture. I think it’s the spectators on one side, Alex Howes, the peloton on the right side, with Liège in the background. It is fun walking among the riders and the peloton at the start. I like to observe the emotions, and expressions of the riders. 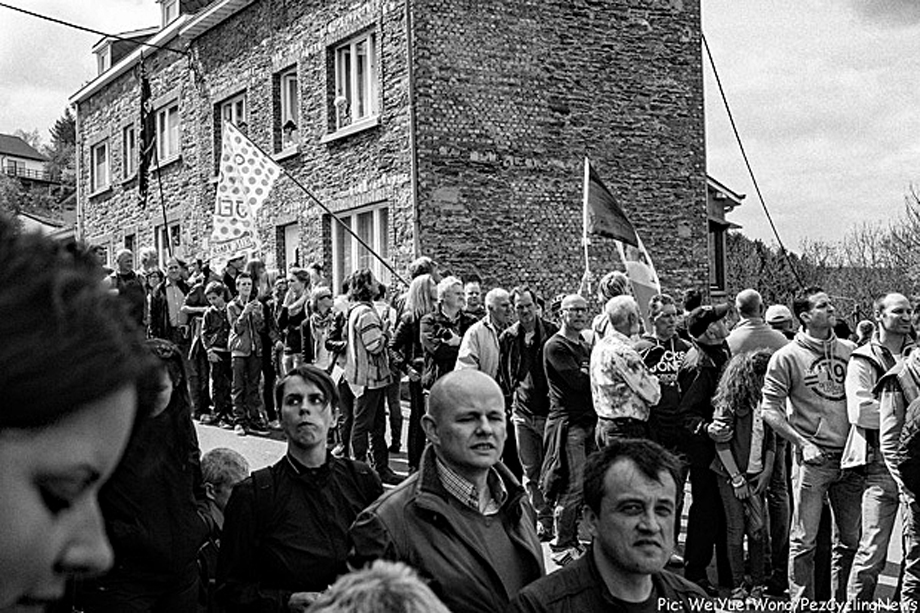 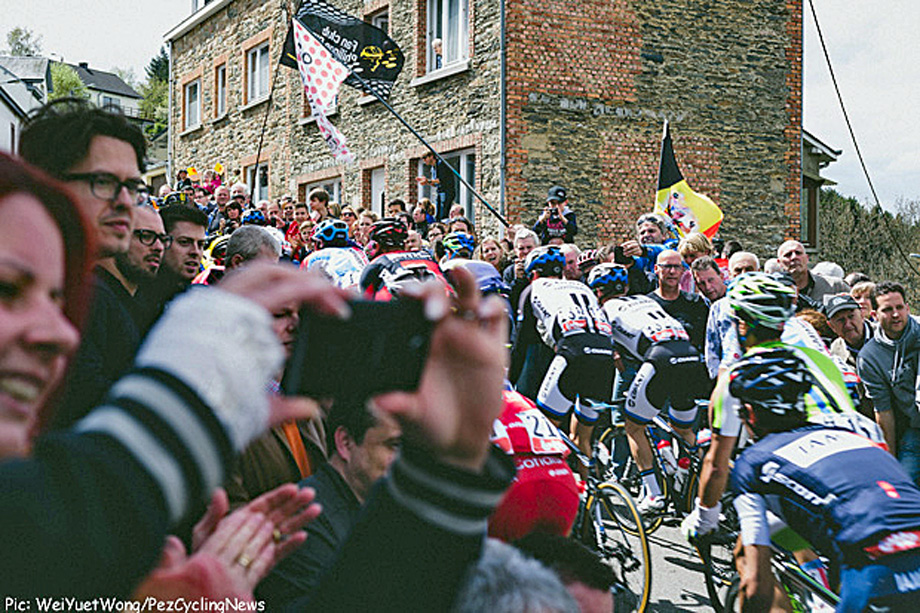 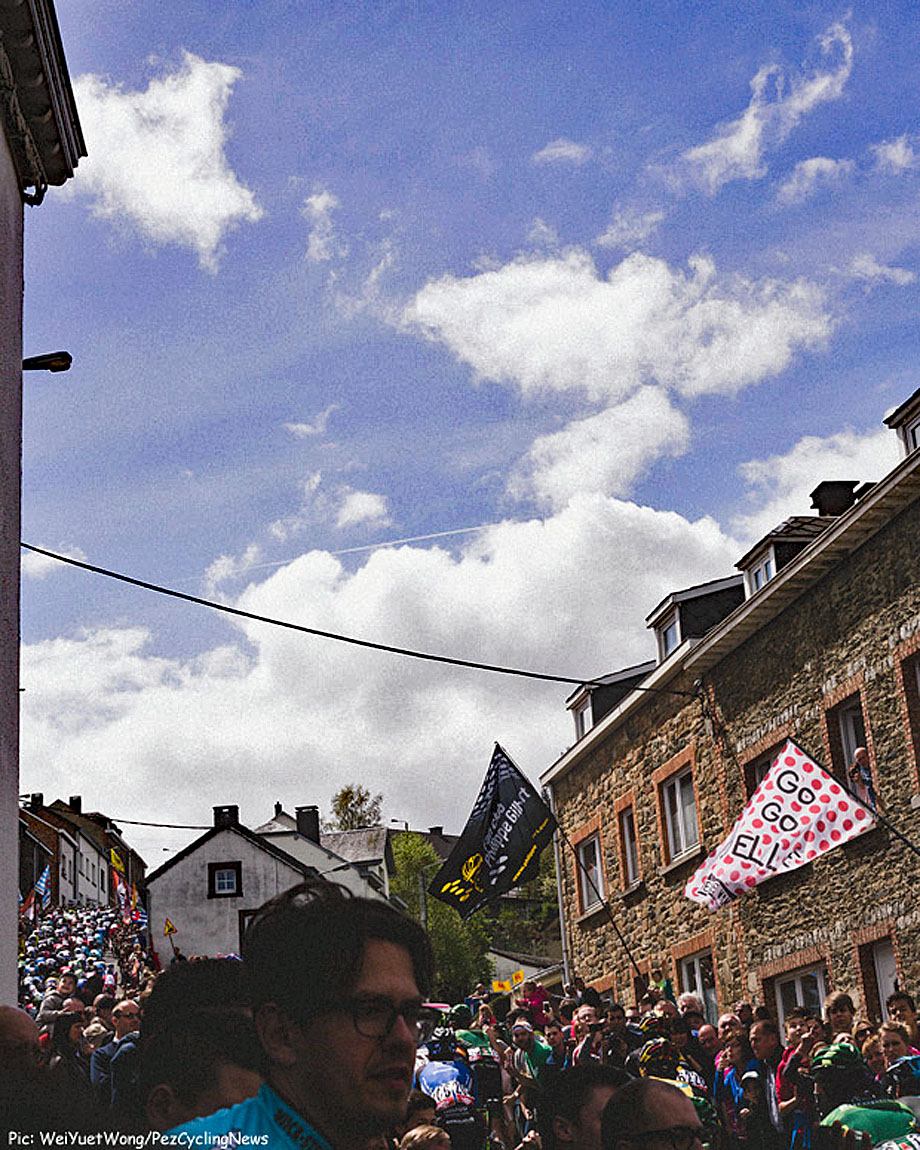 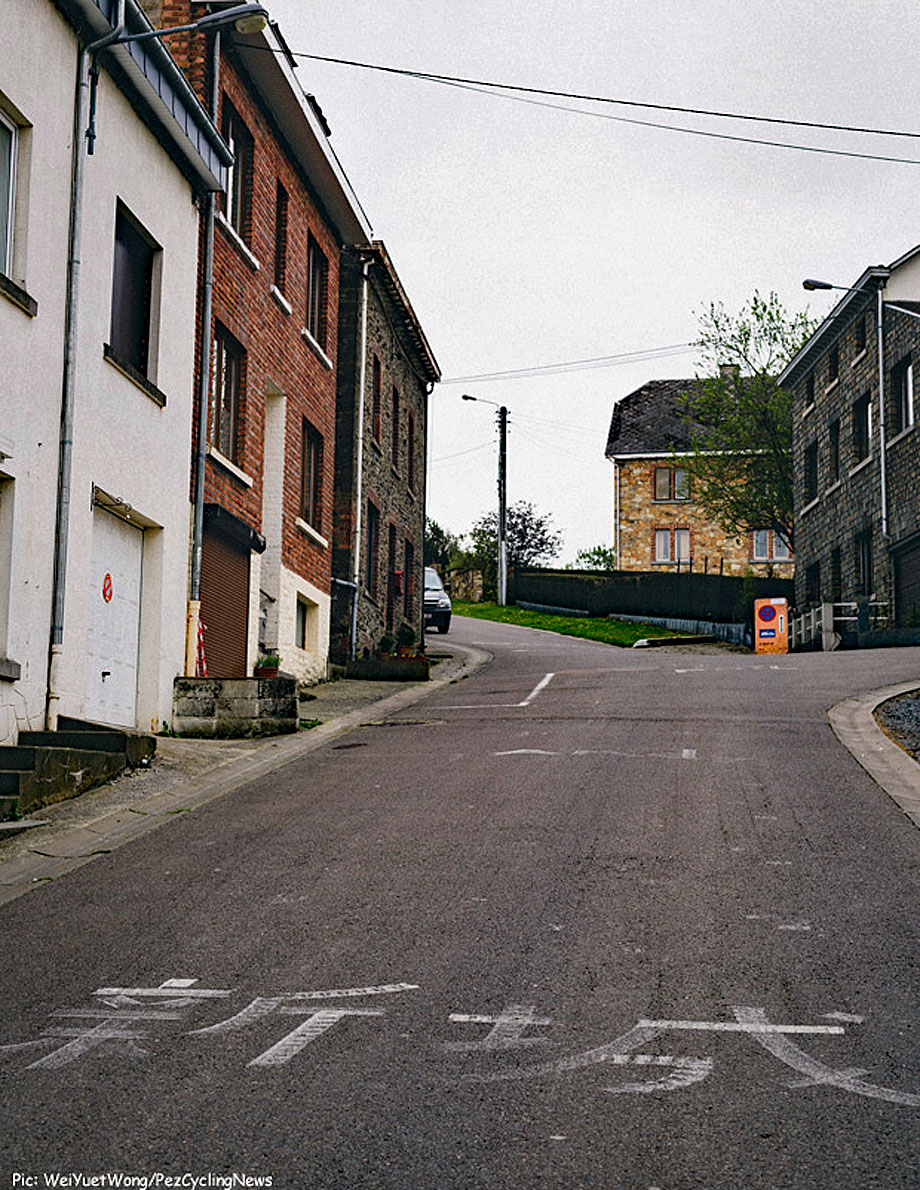 After the peloton started, I raced to the iconic Côte de Saint Roch climb. It’s steep and difficult (14% max, 11% ave, for 1km), and it comes at just about halfway in the race. I decided to take my chances there. While standing and waiting, I spoke with a Frenchman, Jack. He called Liège-Bastogne-Liège the finest race, because the winner is one who is in top condition. He also told me that the second half of the peloton would come to a standstill halfway up the climb. “You will see.” He grins. I saw Yukiya Arashiro’s name painted on the Côte de Saint Roch, and Jack says he’s a nice boy, 10th in Amstel is excellent.

I notice the huge number of people around me, and I thought that Belgians are really mad about cycling. And I love that. There were people waving Romain Zingle flags. The Jelle Vanendert Fan Club was out in full force opposite me. Jack also laughs, “Belgians love cycling, and drinking.” 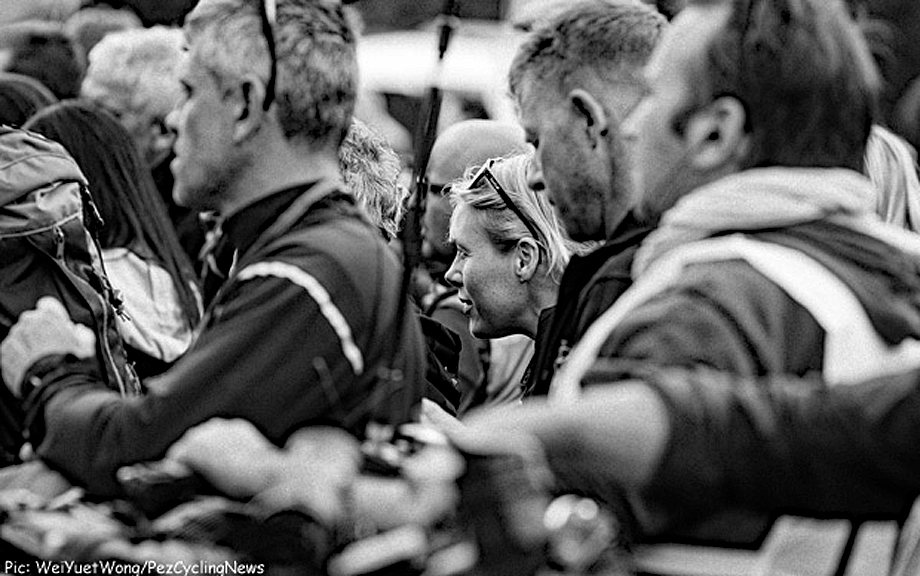 Before the riders arrive, there is a lot of anticipation. I was looking at the mass of team soigneurs waiting for their riders to come in, and I happen to catch the Orica-Greenedge soigneur looking intently at the screen, continuing the Australian theme. 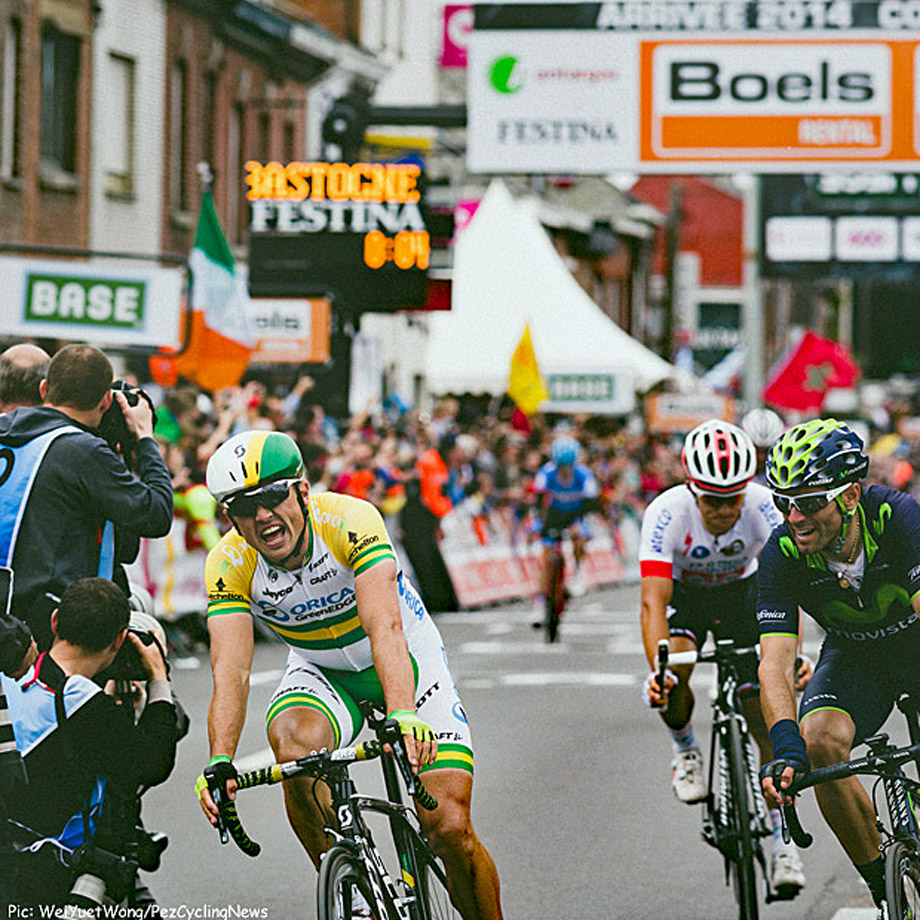 Picking a spot at the finish line is also some lottery. For sure I miss more than I make. I missed a lot of the post-race rider portraits at Liège-Bastogne-Liège. But, I guess I must be happy with this one. I cannot tell if Simon Gerrans is estatic or just plain exhausted, Alejandro Valverde steals an envious (?) look at Gerrans, and Michał Kwiatkowski looks a little disappointed. 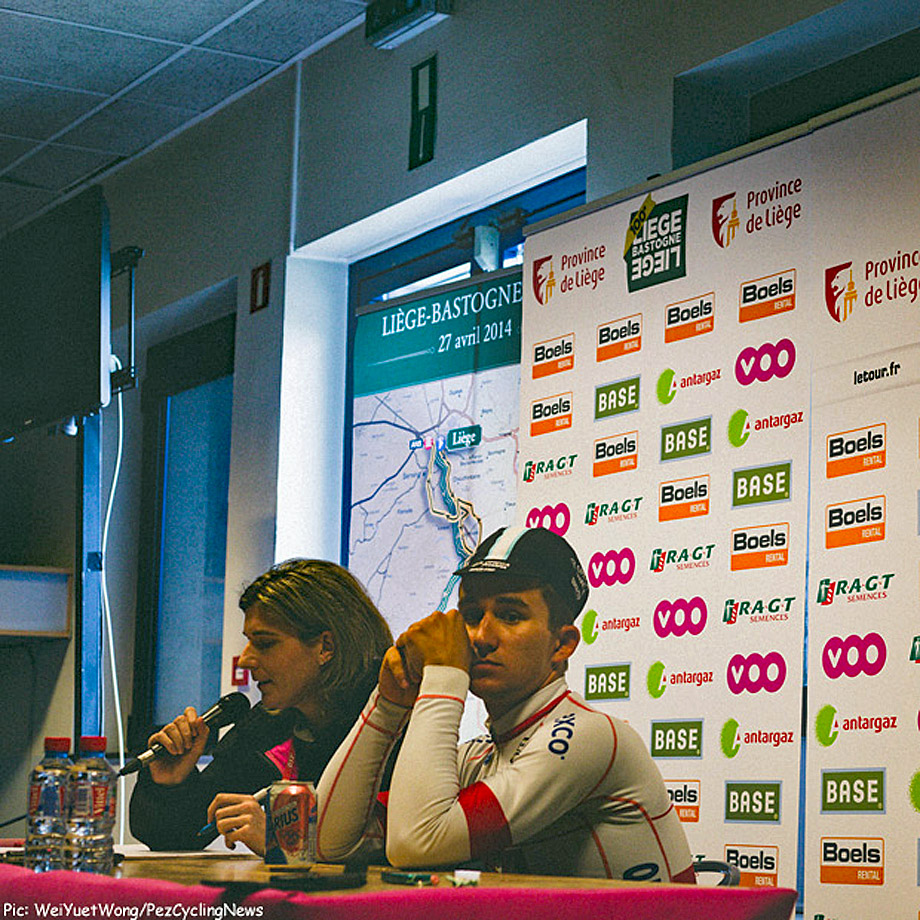 I don’t envy the riders who need to explain themselves, what they think, and their performances immediately after the race. It’s a time when emotions and adrenaline is still running high. However for me, it’s interesting to hear the voices, and put a voice to the face, and also to observe the body language. Does Michał Kwiatkowski look a little bored?

The Australian theme comes full circle with an Aussie victory. I was incredibly lucky, beginning with spotting those two boys waving the Australian flag in the morning at the start.