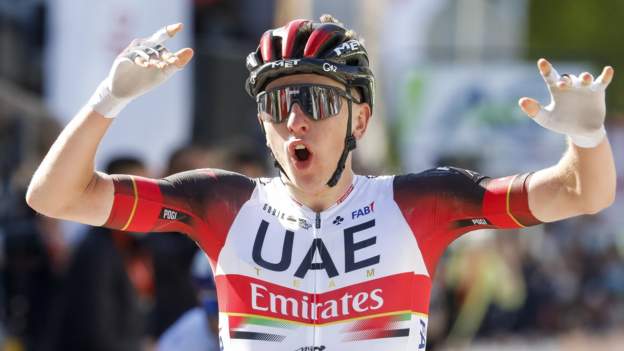 She finished the 140km-race – which took in seven hills along the same narrow and winding Ardennes forest roads of the men’s event – ahead of compatriot Annemiek van Vleuten and Italian Elisa Longo Borghini.

Both men’s and women’s races were decided in sprint finishes after breakaway groups made their move with 13km remaining.

Slovenia’s Pogacar, Frenchman Alaphilippe and his compatriot David Gaudu, Canada’s Michael Woods and the 41-year-old Spaniard Valverde managed to get away from the rest of the peloton atop the Roche-aux-Faucons climb.

Valverde was first to try break for the line and was overhauled by Alaphilippe and Gaudu with 50m to go, before the 22-year-old Pogacar timed his sprint to perfection to grab victory.

“I sat on Alaphilippe’s wheel in the run-in. I knew he could go for it from distance and I just managed to get him,” said Pogacar who won the 2020 Tour de France.

“I love this race,” he said of Liege-Bastogne-Liege, which is the oldest of the annual ‘Monument’ one-day races and was first contested in 1892.