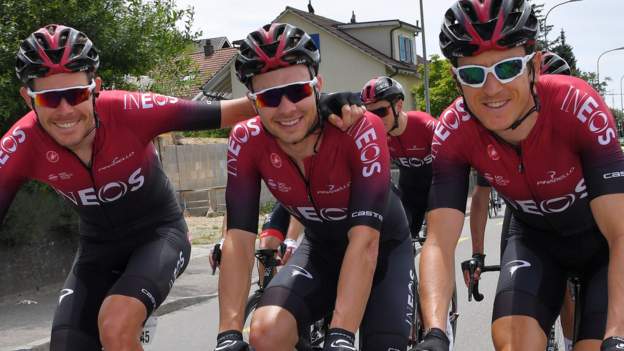 Gareth Bale jokingly refers to himself and his Wales team-mates at Tottenham Hotspur, Ben Davies and Joe Rodon, as the ‘Welsh Mafia’.

Former Tour de France champion Geraint Thomas, who attended the same secondary school in Cardiff as Bale, may not take too kindly to Spurs comparisons as an Arsenal fan – but he can see the similarities with Ineos Grenadiers.

Thomas is sat next to team-mate Owain Doull in bright Swiss sunshine as they prepare for the Tour de Romandie stage race, which starts on Tuesday.

Together with Luke Rowe, a veteran of several Tour de France campaigns but not racing in Switzerland this week, Thomas and Doull form a triumvirate of Cardiff-born riders in the Ineos ranks. So do they have a name for their group, like Tottenham’s footballers?

“The legends? The bosses? The ‘Taffia’, whatever floats your boat,” Thomas offers with a laugh.

The Welsh connection at Ineos is deep-rooted. Team principal Sir Dave Brailsford was raised in north Wales and speaks Welsh, while Thomas is the only remaining rider from the original line-up when the team launched in 2010 as Team Sky.

Rowe was a member of the same junior cycling club as Thomas in Cardiff, Maindy Flyers, and he followed him to Sky in 2012.

So while Doull is an established team member having joined in 2017, the 27-year-old does not have Rowe’s experience in road racing – or his history with Thomas.

“Obviously it’s not the same bond me and Luke have – don’t take that the wrong way,” Thomas says to Doull, who smiles and accepts it’s ‘nothing personal’.

Thomas adds: “Being with guys from the same neck of the woods and doing a lot more together, it means as soon as you get back on your bike and you’re in the race – even if you haven’t raced together recently – you’re immediately like old mates who see each other again and it’s like you haven’t been away for years.

“That definitely helps with the racing, it makes communication a lot easier and you know how each rider reacts and races, and it’s just nice to race with guys you genuinely get on with.”

Like Rowe has done for Thomas on numerous occasions, Doull will play a supporting role to the 34-year-old at the Tour de Romandie.

“It’s nice to have the Welsh side of it, and any races you do with a heavier British contingent, with guys like Swifty [Ineos team-mate Ben Swift] and [former Ineos team-mate Ian] Stannard before then,” says Doull.

“Everyone’s come through the same system, with British Cycling on the track and with the academy.

“Everyone’s used to racing in a similar way and making the same decisions so, in those heat of the moment situations, everyone’s on the same page naturally.”

The six-stage race lasts until Sunday and the hilly route, which begins with a 4km prologue – like the stage Thomas won in 2012 – and ends with an individual time trial, should suit the double Olympic gold medallist.

“It’s a strong team with two good options and hopefully we can be up there like we were at the Volta a Catalunya [in March], where I was third, Richie was second and our team-mate Adam Yates was first,” says Thomas.

“It would be nice if Richie and I could be up there again. Our form seems to be good at the moment.

“I feel good, better than I normally do this time of year. I’ve spent a lot of time away from my family due to Covid and Brexit and all sorts, so I’ve used that time to knuckle down.

“It seems to have worked well, I’m feeling pretty good, the weight is good – and that’s the biggest battle for me most of the time – so it’s definitely heading in the right direction.

“I’ll get stuck into this race and get the best result possible.”