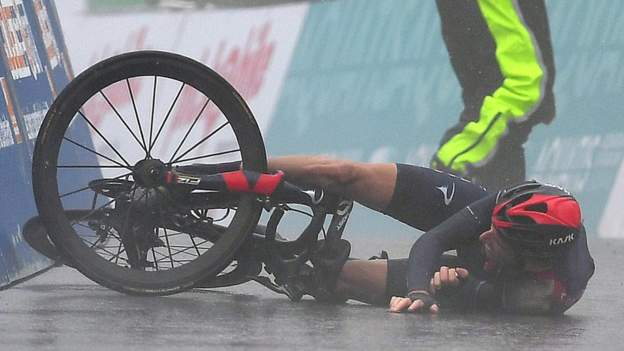 Geraint Thomas remained second overall at the Tour de Romandie despite a dramatic crash within the last 50m of Saturday’s penultimate day.

In an uphill sprint against Michael Woods, Thomas fell before getting back on his bike to finish the stage.

The Welshman was bidding for a first stage victory since winning on Alpe d’Huez at the 2018 Tour de France.

Woods (Israel Start-up Nation) takes over as the overall leader, with Ineos Grenadiers’ Thomas 11 seconds behind.

Ben O’Connor, who followed Woods over the line on Saturday, is now third overall, 21 seconds off yellow.

Thomas’ crash – in which he appeared to have avoided any lasting injury – was a final bit of drama on a 161km stage from Sion packed with incidents, including a controversial decision to neutralise the final descent out of Suen, inadvertently handing a breakaway an extra two-minute advantage.

After an epic 20-kilometre final climb in wet, near-freezing temperatures, Thomas and Canadian Woods were battling for the stage win.

As the Welshman went to launch his final sprint his hand, possibly numbed by the cold conditions, slipped off his bars and sent him crashing to the ground.

Sunday’s fifth stage in Fribourg is a 16km time trial, which features a 700-metre cobbled section, and will bring the race to a conclusion.

Thomas’ best previous result in the Swiss race is third in 2019 in preparation to defend his Tour de France title later that year. He subsequently went on to finish as runner up to Ineos teammate Egan Bernal in the 2019 Tour.