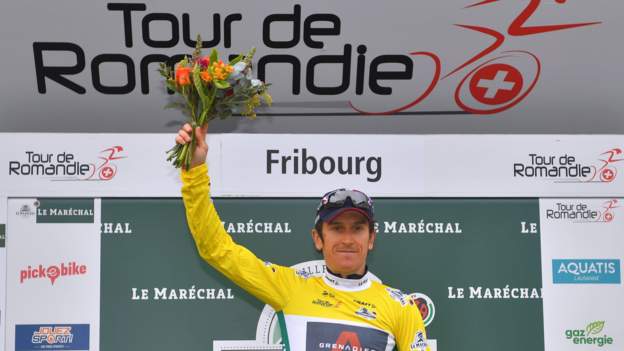 A superb ride over the 16km saw him take nearly a minute out of Woods.

It was not enough for the Welshman to beat stage winner Remi Cavagna but gave him the overall victory by 28 seconds from team-mate Richie Porte.

Steffan Bissegger was second on the day, while Woods finished down in 28th to drop off the general classification podium entirely.

Thomas survived a dramatic crash on Saturday, going down within 50m of the finish line on the penultimate day – robbing him of a possible stage win.

“I’m very happy, especially after that little mishap yesterday which wasn’t ideal and made it more of a challenge today,” Thomas told Eurosport.

“I felt good and it kind of reminded me of when I won the Tour… it was a similar sort of stage, the last TT was like this, and on the last descent on the radio they were telling me, ‘don’t do anything stupid, don’t crash on the corners’, and then over-thinking it a bit.

“I’m really happy to finish it off and it’s been a great week with the team.”

Australian Porte finished 28 seconds behind Thomas in the general classification, while Fausto Masnada produced a fantastic time trial to take third on the podium overall, with Marc Soler fourth.

Thomas’ best previous result in the Swiss race was third in 2019 as he prepared to defend his Tour de France title later that year.

He subsequently went on to finish runner-up to Ineos team-mate Egan Bernal in the 2019 Tour.