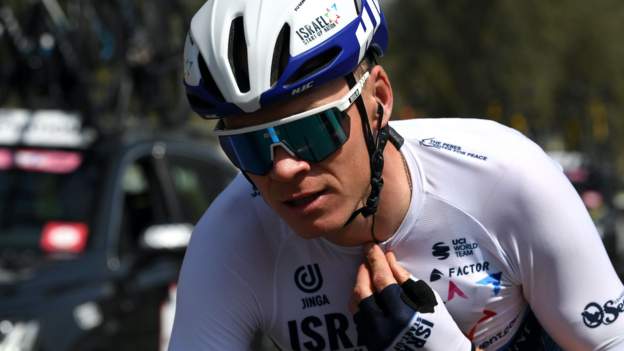 Tensions between the World Anti-Doping Agency (Wada) and cycling’s governing body over the controversial closure of the investigation into four-time Tour de France winner Chris Froome’s use of salbutamol in 2018 have been revealed.

The rider was cleared of any wrongdoing over the legal asthma drug almost three years ago.

“We both know very well who took the initiative of closing this case and the reasons why,” Lappartient continued in the letter.

“It is disappointing to see that your organisation is not taking responsibility on the ground that technically the decision had to be taken by the UCI.”

Lappartient also suggested the UCI had “concerns” about Wada’s rules regarding the use of salbutamol, but did not reveal them to Froome because of “an understanding [Wada] would then support the UCI in justifying what, to the public, is a very difficult decision to understand”.

When approached by the BBC, the UCI said the letter was part of an exchange of correspondence between the two men “aimed at addressing the relationship” between the two organisations.

Wada said the correspondence was in “the context of a frank discussion… intended to address all outstanding issues openly and honestly… after a period of uncertainty.”

It said it had “followed all due legal and scientific process”.

Froome – at the time the reigning Tour de France champion – returned an adverse drugs test at the 2017 Vuelta a Espana when he was found to have above the allowed level of salbutamol in his urine. News of the finding was then leaked to the media in December 2017.

The British rider denied wrongdoing, insisting he increased his dosage on medical advice when his asthma symptoms worsened during the race, and that it remained within the legal limits.

He was free to continue racing pending an investigation, but amid mounting controversy, there were calls for his then-employers Team Sky to suspend him.

They insisted the rider was only 19% over the limit when the adverse test was adjusted to take account of dehydration.

Wada regulations allow athletes to take part in a pharmacokinetic study – a controlled test to help them try to show how they exceeded the permitted level of a drug without taking more than the allowed dose. But the agency said this was not feasible in Froome’s case as it was impossible to recreate the conditions in which he took the original test.

After a nine month investigation, Wada eventually accepted there was no breach, and the UCI dramatically dropped the case in early July 2018, claiming it did so “primarily based on Wada’s advice”.

Ten days after the decision was announced, Reedie wrote to Lappartient saying it was “disappointing” and “wrong” that “the position of the UCI is now apparently that it had no choice but to follow the position of Wada and close the case”.

“The UCI was the results management authority with exclusive jurisdiction over the case and all relevant elements at its disposal,” he wrote. “If the UCI… disagreed with Wada’s position, it was under no obligation to espouse it.”

He added that Wada “had no influence on the way the process was conducted”.

“It is with regret that we have observed apparent attempts on the part of the UCI to divest itself of any responsibility for the decision,” Reedie wrote.

Two days later, Lappartient replied to Reedie, expressing his disappointment at “a lack of public solidarity from Wada” and blaming the agency for “tensions” at the Tour de France.

Lappartient wrote that “the objective difficulty in explaining how the Wada salbutamol regime can allow an athlete with a concentration of 2000ng/ml to be absolved, (especially without a pharmacokinetic study taking place)” was also partly responsible.

“I am sure you will understand the impact this case has had on the UCI’s reputation and my reputation,” he wrote.

The UCI president referred to a survey conducted the previous week in which 71% of respondents said they did not trust the cycling authorities to guarantee a Tour de France without doping. “Needless to say the decision in Mr Froome’s case was obviously central to those responses,” Lappartient wrote.

Lappartient explained how the UCI “sought to protect” Wada’s salbutamol regime during the case, sharing its final decision with the agency before sending it to Froome and “even accepted Wada’s requests to remove elements of the decision which would put Wada in an uncomfortable position”.

“The fact the UCI ‘did not attribute [its] decision to any systemic failing’ was not because it does not have concerns about your salbutamol regime, but rather because it elected not to air these in a written document sent to an athlete,” he told Reedie.

Lappartient explained that he was “happy to do that for Wada on the understanding that your organisation would then support the UCI in justifying what, to the public, is a very difficult decision to understand”.

When made aware of the correspondence, lawyers for Froome told the BBC: “It seems that the UCI had concerns about Wada’s salbutamol regime.

“It would be fairer to athletes if those concerns were tackled, rather than allowing the regime to continue in its current form simply to save Wada from embarrassment and potential legal liability from innocent athletes who have been wrongly prosecuted.

“Mr Froome hopes that the UCI and Wada have been working to improve the salbutamol regime and to reduce the risk of innocent athletes being wrongly accused of falling foul of it.”

In his letter to Reedie, Lappartient also wrote that the UCI “refused to comply with a clear procedural order from its Anti-Doping Tribunal because it was told by Wada that doing so would undermine its salbutamol regime”.

Describing the revelation as “disappointing”, Froome’s legal team told the BBC: “Were an athlete to refuse to comply with such a procedural order, it would not be tolerated.

“Mr Froome therefore cannot comment on the specifics of the case, and makes only general remarks.”

What have the UCI and Wada said?

When approached by the BBC, the UCI said the letter was part of an exchange of correspondence between the two men “aimed at addressing the relationship between the UCI and Wada moving forward”.

“Wada has made developments with respect to the salbutamol regime in anti-doping proceedings,” it added.

Wada said the correspondence was in “the context of a frank discussion… intended to address all outstanding issues openly and honestly, clear the air and pave the way for a positive future relationship between the UCI and Wada after a period of uncertainty.

“This was an extremely complex and difficult case that provoked a huge amount of debate. For a range of reasons that were outlined in considerable detail at the time…- Wada continues to believe that the decision taken not to proceed with an ADRV [anti-doping rule violation] against the athlete was the correct and fair one.

“Since this case and the subsequent discussions that took place, work has continued in relation to salbutamol… as Wada constantly reviews the latest scientific evidence when it becomes available.

“At every stage, Wada followed all due legal and scientific process and, since the time of this correspondence, the two organisations have worked collaboratively and productively for the good of all athletes in the sport of cycling.”