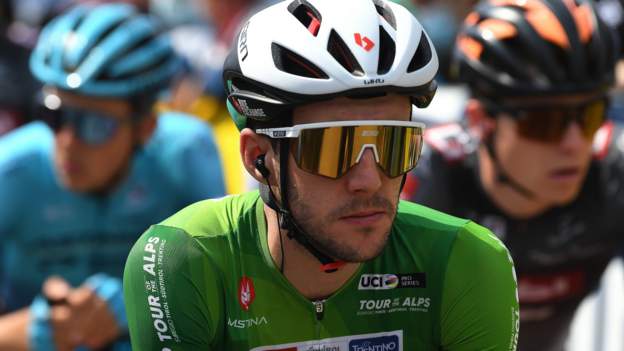 Britain’s Simon Yates begins his bid for Giro d’Italia victory on Saturday looking to end three years of heartbreak and misfortune at the race.

Having won three stages and led for 13 days in 2018, he cracked in the final week, before an underwhelming eighth-place finish in 2019 was followed by an early exit last year after he tested positive for Covid-19.

The 28-year-old Team Bike Exchange rider starts the first Grand Tour of the year as perhaps the outright favourite following his dominant Tour of the Alps victory last month.

After moving to October last year because of the coronavirus pandemic, the Giro returns to its regular May slot, starting in Turin on Saturday and ending in Milan on Sunday, 30 May.

The general classification riders are competing for the maglia rosa – the pink jersey.

As well as victory in the Alps, Yates finished in the top 10 at stage races Volta a Catalunya and Tirreno-Adriatico this year and is looking for his second Grand Tour win, having responded to his 2018 Giro disappointment with an imperious victory at that year’s Vuelta a Espana.

He would be the third British man to win the Giro, all in the last four years, following Chris Froome in 2018 and last year’s winner Tao Geoghegan Hart, who is racing in the Tour de France this year instead of in Italy.

Colombia’s 2019 Tour champion Egan Bernal endured a tough season last year but is supported by a very strong Ineos Grenadiers team and his climbing skills should suit the terrain on his Giro debut.

His form is unknown though, with the 24-year-old not having raced since mid-March, preferring to train at altitude in Colombia, while he has also been dealing with a back injury.

Portugal’s Joao Almeida, 22, led the race for 15 days last year before finishing fourth overall, though the main contenders may be even more wary of his Deceuninck-QuickStep team-mate Remco Evenepoel.

Belgium’s Evenepoel, 21, is making his Grand Tour debut and has not raced since fracturing his pelvis in August, but won every stage race he entered in 2020 and is one of the sport’s most exciting talents.

Last year’s runner-up, Australian Jai Hindley of Team DSM, returns, though the 25-year-old has not had a strong start to 2021.

Britain’s Hugh Carthy, 26, of EF Education-Nippo will attempt to build on his third-place finish at the 2020 Vuelta, while Astana are hoping for a strong showing from Russian Aleksandr Vlasov, 25.

Most of cycling’s major sprint showdowns happen at the Tour, but there is an impressive cast of fast finishers at this year’s Giro.

Australia’s Caleb Ewan, 26, has won three Giro stages before and will be the focus for his Lotto Soudal team.

Dutchman Dylan Groenewegen, 27, of Team Jumbo-Visma is racing for the first time since he was suspended for causing the crash at the Tour of Poland that saw Fabio Jakobsen suffer serious injuries.

UAE Team Emirates’ Fernando Gaviria, 26, has won five Giro stages before and the Colombian, who caught Covid-19 twice last year, is looking to recapture the form he showed early in his career.

Former three-time world champion Peter Sagan, 31, won a stage and finished second four times on his Giro debut last year and the Slovak will also target stage wins on days that do not suit pure sprinters.

The route features 21 stages, starting and ending with individual time trials, in which Yates will have to limit his losses to his rivals who are stronger against the clock.

A particularly mountainous course, which features a total elevation gain of more than 47,000m, sees plenty of climbing in week one amid the sprint stages, with an uphill finish on stage four and key mountain days on stages eight and nine.

The second week starts with stage 11, which includes testing gravel sections, before the riders tackle Monte Zoncolan, one of the toughest climbs in cycling, on stage 14.

A brutal third week includes three decisive mountain stages in four days, before the closing time trial, which could see the race decided on the final day, as it was last year.