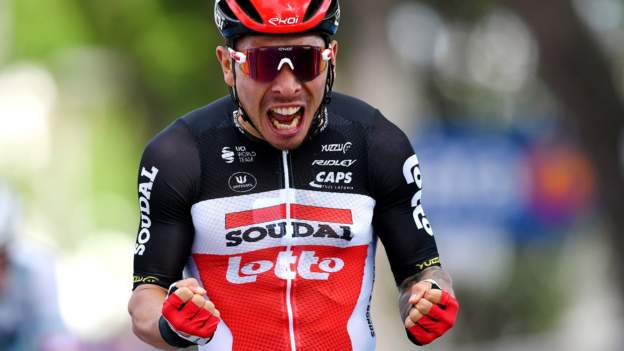 Australia’s Caleb Ewan won stage five of the Giro d’Italia, but one of the general classification favourites, Mikel Landa, crashed out in Cattolica.

Ewan came from behind to outsprint Italy’s Giacomo Nizzolo and Elia Viviani and win his fourth career Giro stage.

Spain’s Landa was unable to finish and left in an ambulance after crashing with stage four winner Joe Dombrowski.

De Marchi called the finish to the 177km relatively flat stage from Modena “a crazy circus”.

“The road was really difficult and technical, even too dangerous in my opinion, so in the last 70km there was really a lot of stress and I hope the guys that crashed are fine,” he said.

Dombrowski, who was second overnight, managed to continue after the crash but lost eight minutes, leaving Alpecin-Fenix’s Louis Vervaeke closest to De Marchi, 42 seconds down.

Pavel Sivakov, who was a potential foil for Ineos Grenadiers’ Egan Bernal, was another to crash and finished over 13 minutes down.

Ewan, who also has five stage wins at the Tour de France, said the victory was a “relief”.

“My goal this year is to win in all three Grand Tours and the first sprint stage didn’t go so good, so there was a lot of pressure on me and all the team to do the job,” the Lotto-Soudal rider said.

“They out-performed themselves, they were so good today and without them I couldn’t have been so fresh at the finish.”

Britain’s Hugh Carthy is up to ninth place for EF Education Nippo, one minute 38 seconds behind, while Simon Yates sits in 14th place, a further 10 seconds back.