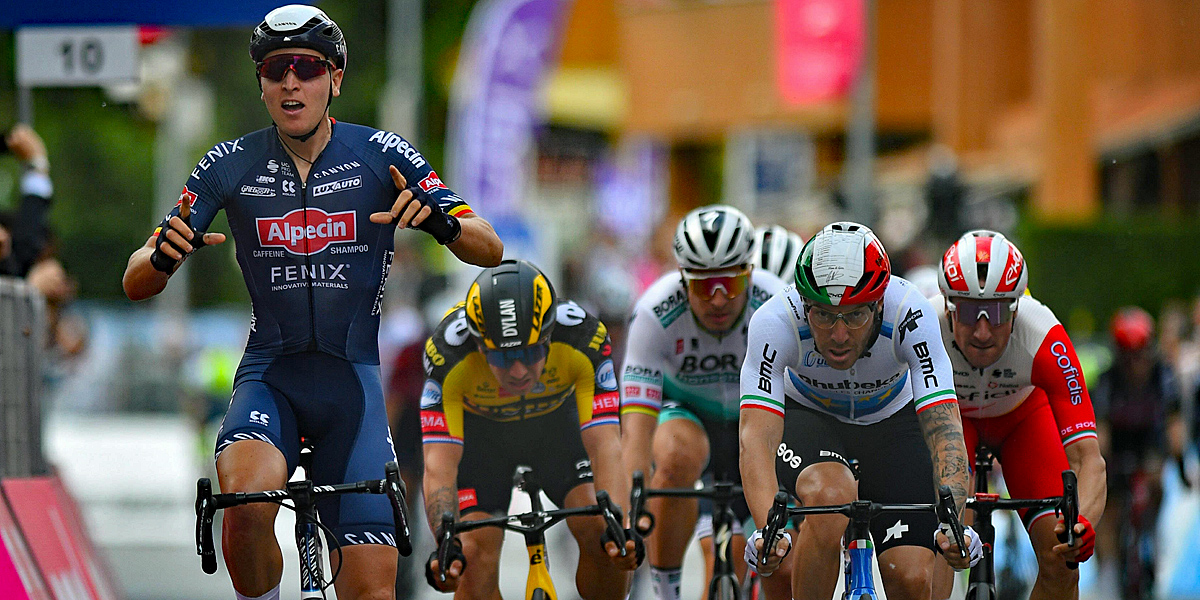 Giro d’Italia stage 2: After the excitement and speed of Saturday’s opening stage 1 time trial, Stage 2 was definitely ‘piano piano’. A break of three became two and they were caught with less than 30 kilometres to go, then it was all down to the sprinters and their teams. In a scrappy finalé, Alpecin-Fenix fastman Tim Merlier showed his speed, beating Giacomo Nizzolo (Qhubeka Assos) and Elia Viviani (Cofidis). Filippo Ganna held his pink jersey. 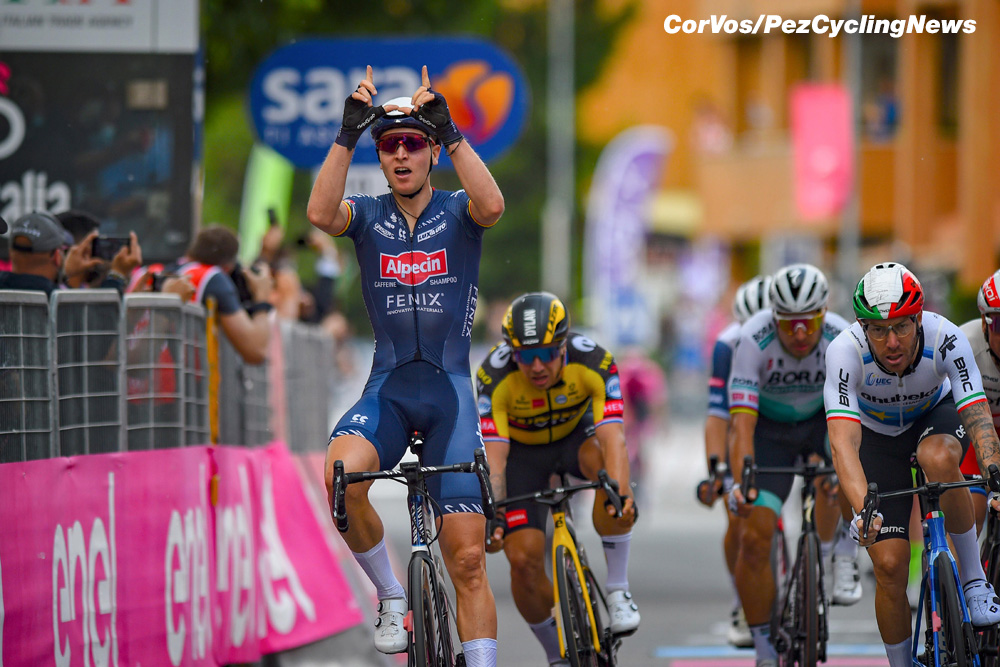 The first sprint stage in the 2021 Giro d’Italia went to Tim Merlier. The Belgian was the fastest of the peloton after a flat stage of 179 kilometres from Stupinigi to Novara. The pink jersey remained in the possession of Filippo Ganna, partly because he picked up intermediate bonus seconds.

Ganna in pink at the start

Stage 2 course: The stage is flat, with just a few undulations in the central section. The route runs along the roads of the hinterland of Turin, reaches the Asti area and takes in a few short ascents (KOM points are awarded at Montechiaro d’Asti). In the second section, the stage follows flat, wide and straight roads until the finish. The final kilometres are completely flat, with a few roundabouts and one last right-hander approx. 1,500 m before the finish. In the closing kilometre, the road is wide, undulating a little as the route crosses an underpass, and narrowing briefly with 700m to go, owing to a roundabout. The finish line is on tarmac. 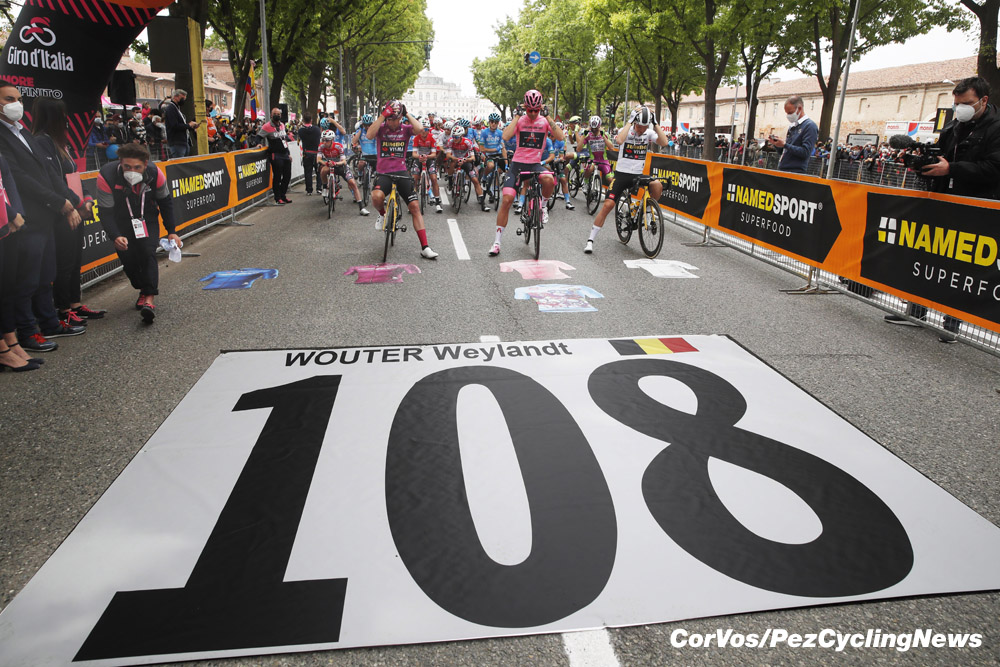 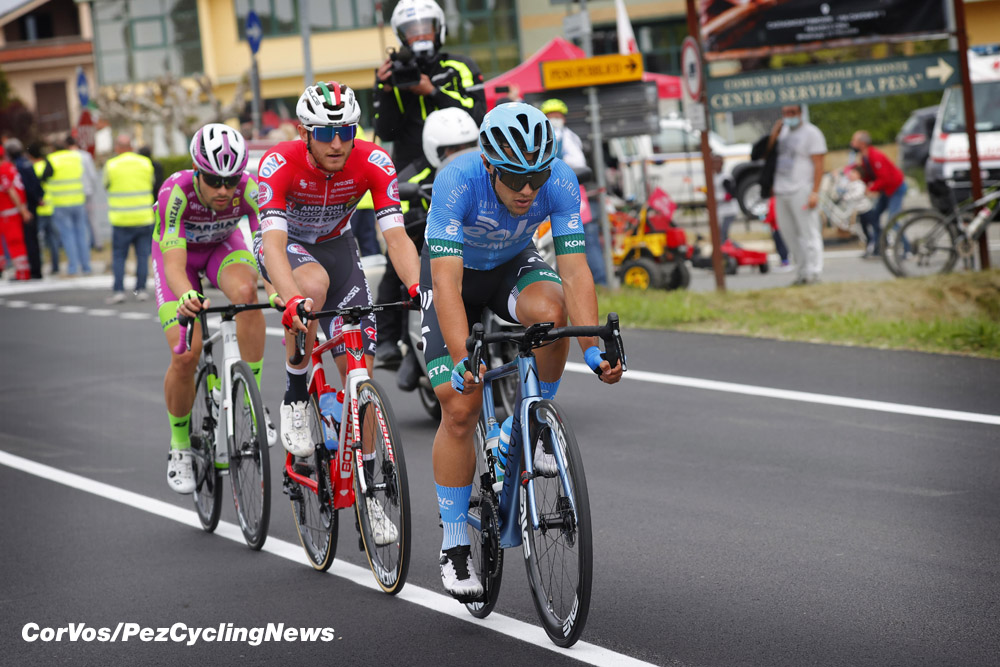 The break went as soon as the flag dropped

After a minutes silence in memory of Wouter Weylandt, who passed away ten years ago, the first road stage of the 2021 Giro d’Italia rolled out of Stupinigi. The first attack was from the expected teams: Bardiani-CSF-Faizanè sent Filippo Tagliani, Androni Giocattoli-Sidermec was represented by Umberto Marengo and EOLO-Kometa had Vincenzo Albanese off the front. The three were soon had 3 minutes. 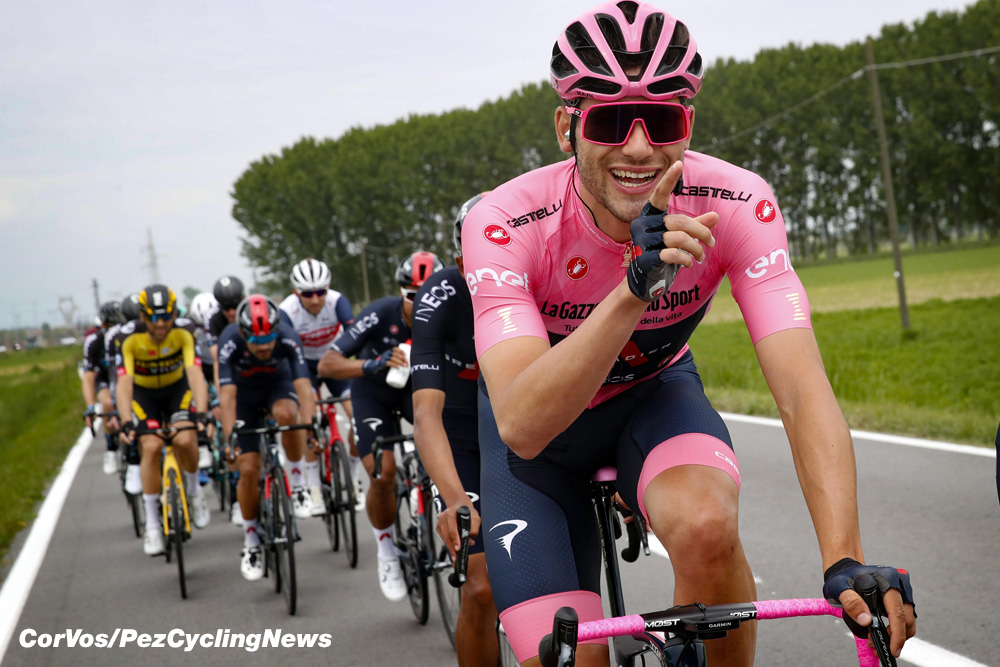 ‘The break has gone already!’ 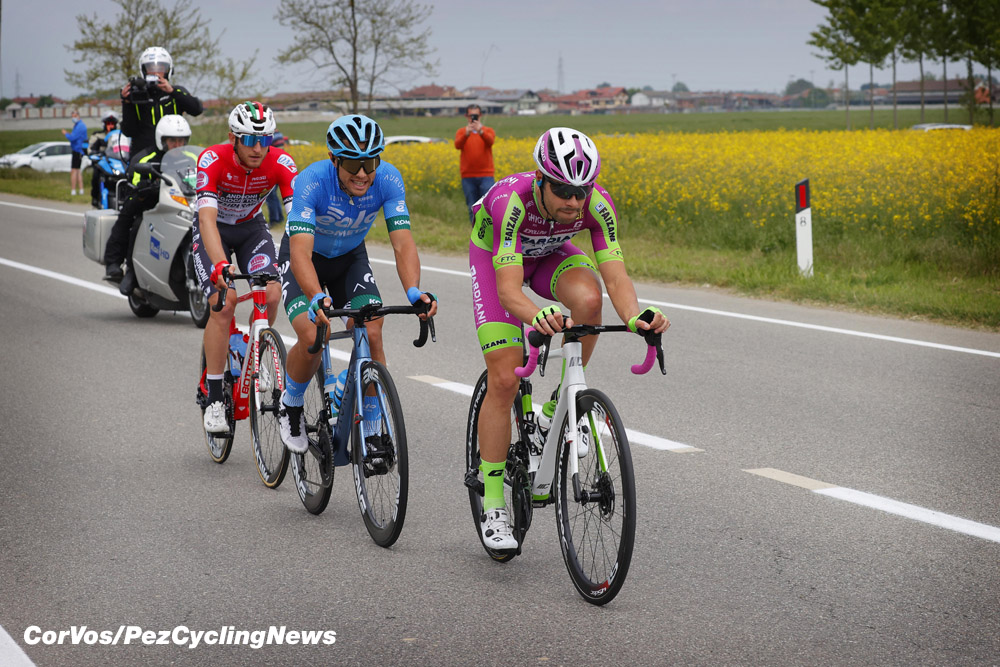 Vincenzo Albanese (Eolo-Kometa), Filippo Tagliani (Androni Giocattoli-Sidermec) and Umberto Marengo (Bardiani-CSF-Faizané) were going to be together a long time today

INEOS Grenadiers with pink jersey Filippo Ganna led the peloton at first, but the sprinter teams of Jumbo-Visma, Lotto Soudal and Alpecin-Fenix eventually helped out. At that time, the lead of the three was more than 5 minutes, but that was reduced to under two. 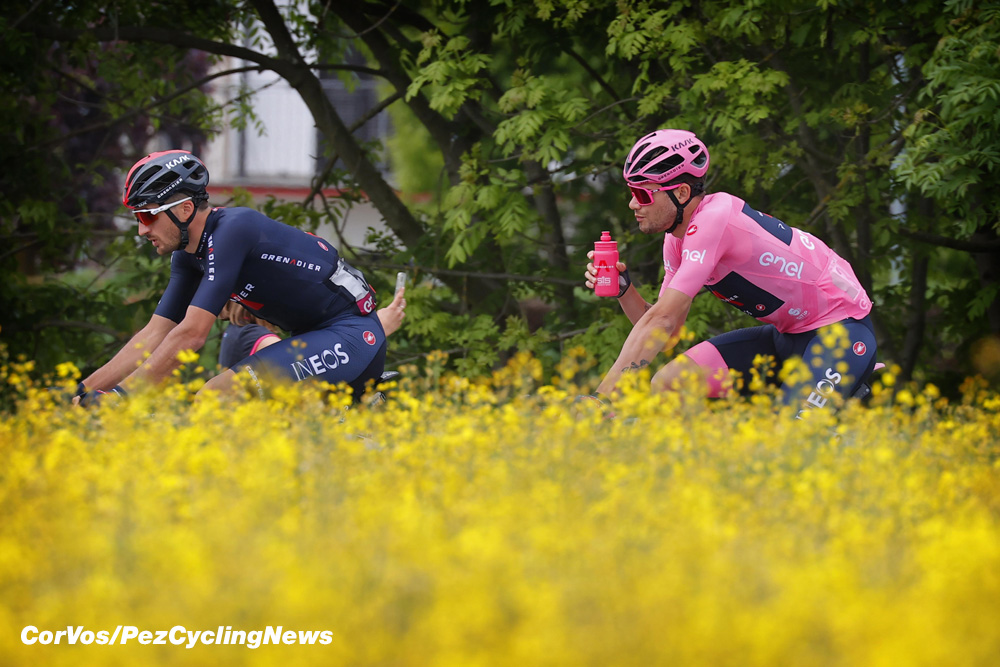 The peloton were in no hurry, but they also didn’t let the break get too far away 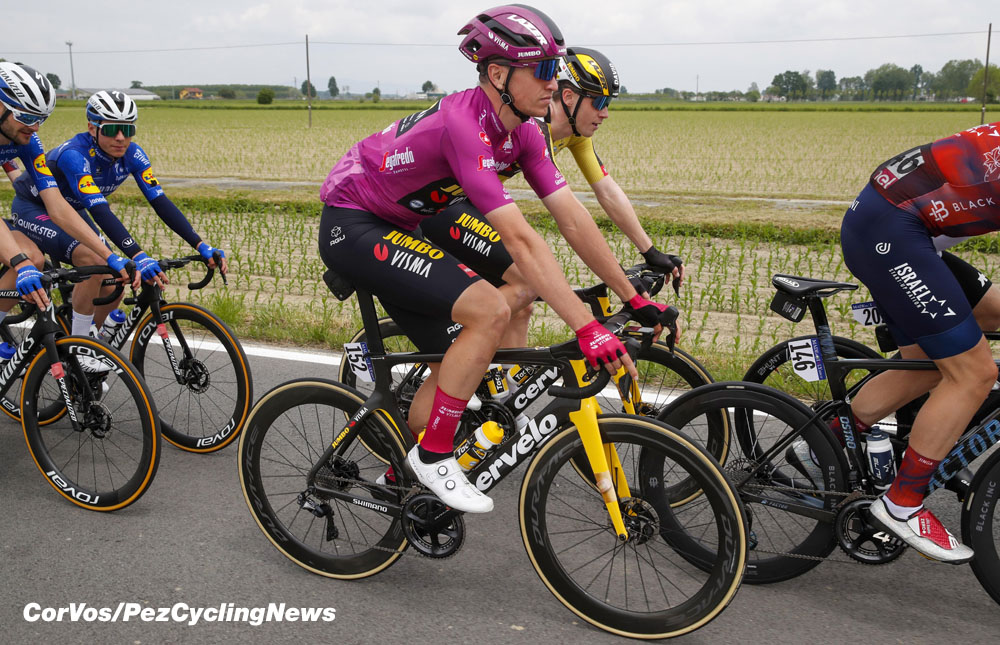 The escape attempt by Tagliani, Marengo and Albanese fas fairly hopeless, but there was a valuable prize up for grabs. On the fourth category Montechiaro d’Asti, Albanese managed to take the first KOM jersey of this Giro for the EOLO-Kometa team by beating Marengo in a sprint. Soon after, Albanian had a flat tire, and was caught by the peloton. 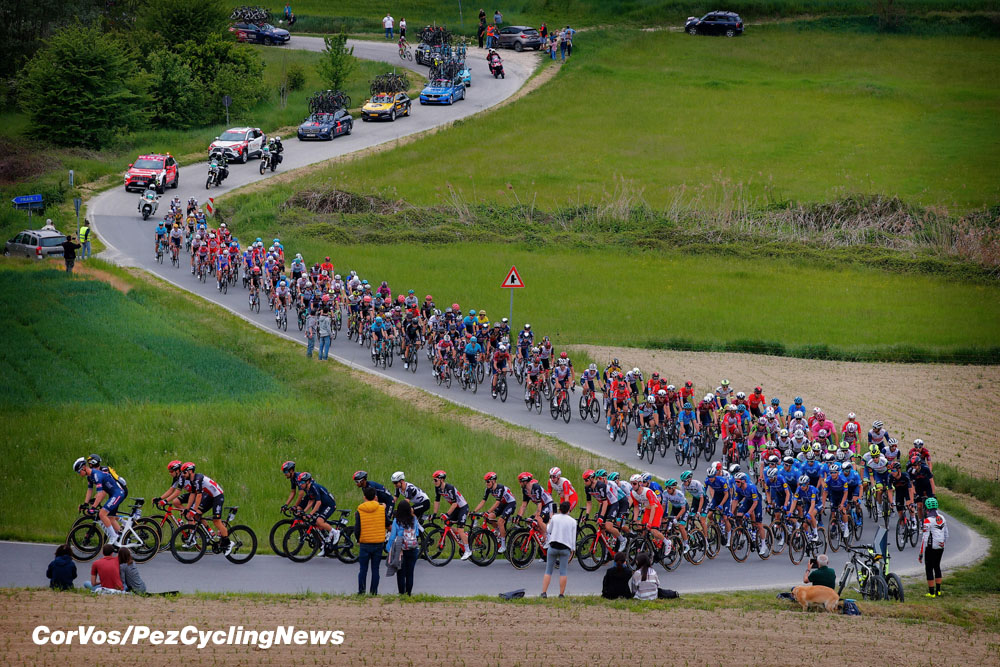 In the first intermediate sprint, points could be earned for the ciclamino jersey. Fernando Gaviria took the points in the peloton behind the breakaway, ahead of Elia Viviani, Andrea Pasqualon and Peter Sagan. The last two escapees were caught at 26 kilometres from the finish. 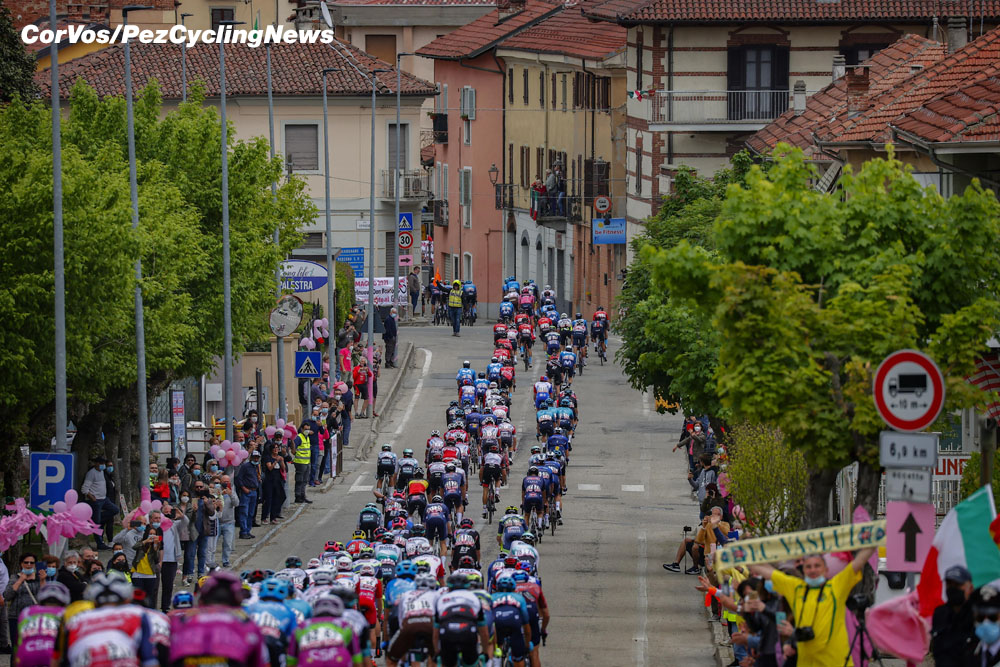 As a result, the peloton fought for the second intermediate sprint, where 3, 2 and 1 seconds could be earned. Pink jersey Filippo Ganna won the sprint and the 3 bonus seconds. Second was Remco Evenepoel, took 2 bonus seconds and Gianni Moscon was third. 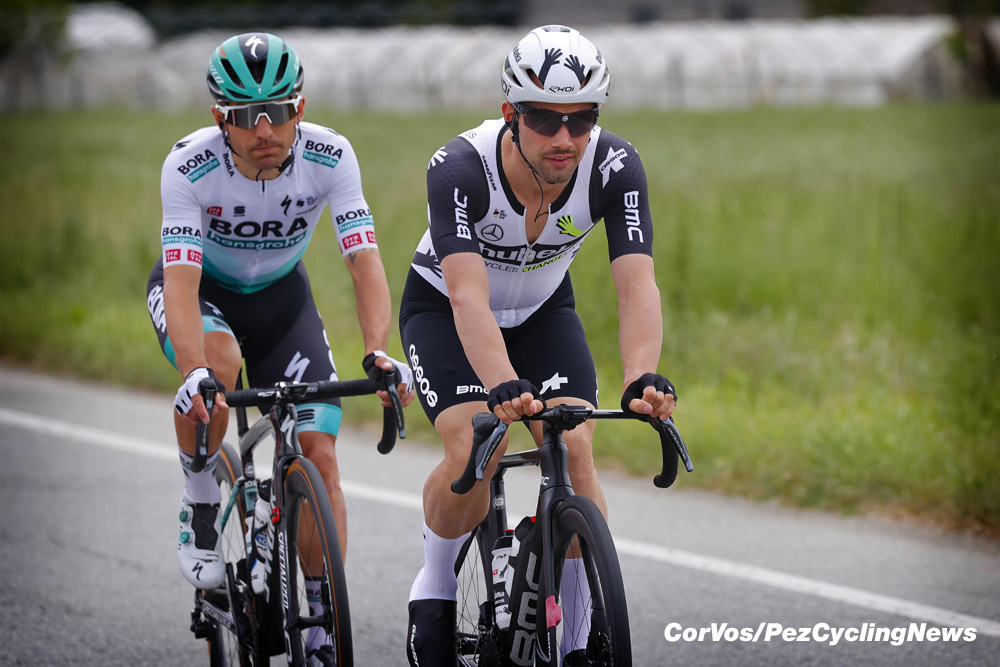 Campenaerts showing off his narrow handlebars

Then it was up to the sprinter teams to guide the peloton to Novara. The classification riders were also kept near the front by their teams to stay out of trouble until the three kilometre mark. With about 5 kilometres to go to the finish, it was quite chaotic due to all of the sprinters trains. 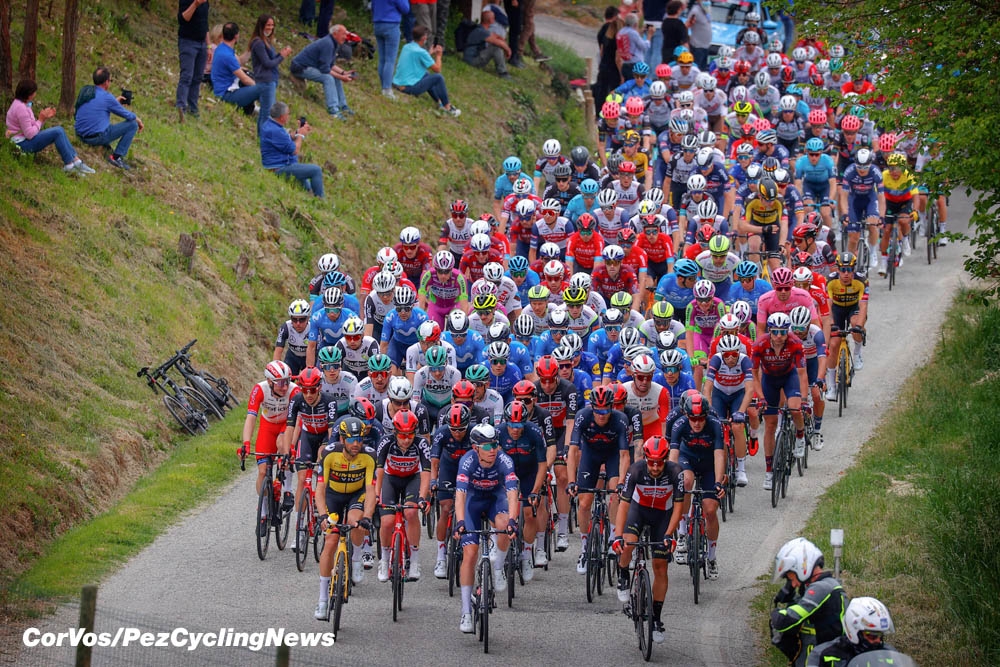 Dylan Groenewegen, probably the most watched sprinter today, was guided forward by Edoardo Affini at the start of the last 2 kilometres. David Dekker also helped his fellow countryman, who returned from his suspension on Saturday. 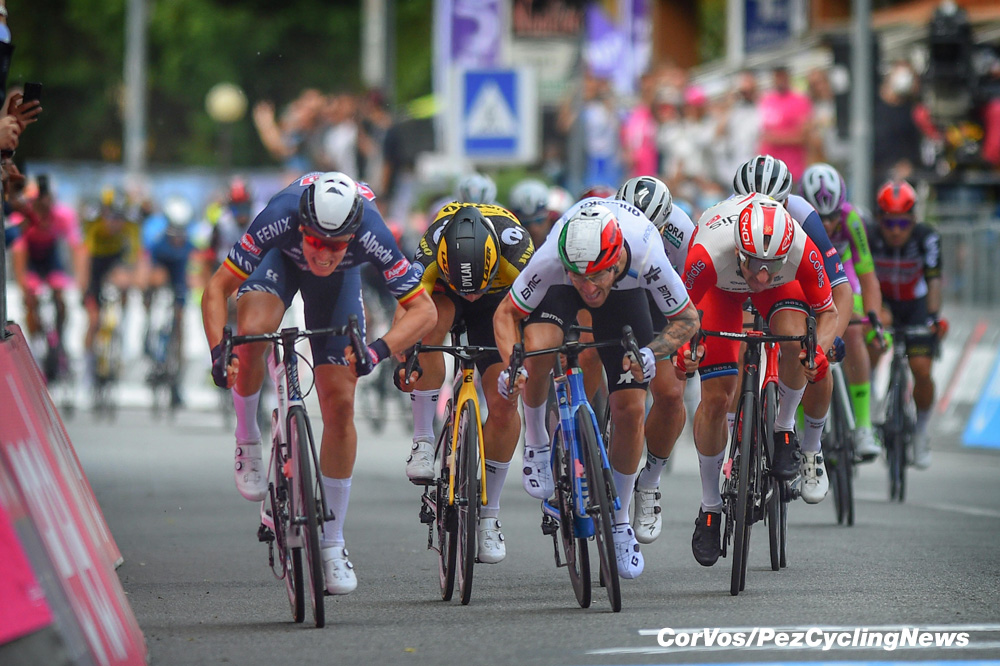 Merlier hit the front and no one could pass

The last kilometres were quite technical. Cofidis moved up and seemed to have Elia Viviani in a good position, but it was Tim Merlier who started his attack at 200 metres and won the sprint ahead of Giacomo Nizzolo, Elia Viviani and Groenewegen. The Dutchman eased off the pressure just before the finish, and Viviani just passed him. Peter Sagan came fifth. 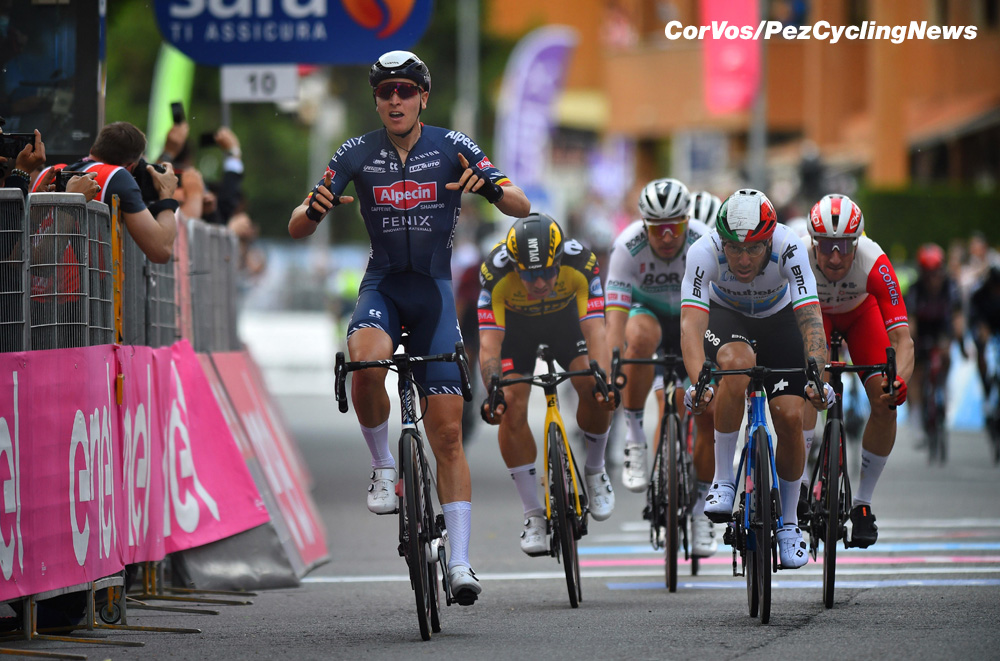 The big win for Merlier and Alpecin-Fenix

Stage winner Tim Merlier (Alpecin-Fenix): “I’m very happy with this victory in my first sprint at a Grand Tour. I knew it was important to be well-positioned at the last roundabout. When I came out of it I only thought of going faster and faster afterwards. I went from far out, at about 250 metres. I still had enough to finish it off. My preparation at altitude has been good. I was confident before tackling the Giro.”

The Maglia Rosa, Filippo Ganna (INEOS Grenadiers): “I did the time bonus sprint just to take the bonification away from the others, thinking of the coming days if Egan (Bernal) or Pavel (Sivakov) are fighting for the Maglia Rosa. I saw Remco (Evenepoel) was trying to go for it too. But Gianni (Moscon) and myself did a good job. I enjoyed hearing the crowd of Piedmont yelling my name today. We know tomorrow is a perfect stage for Peter Sagan.”