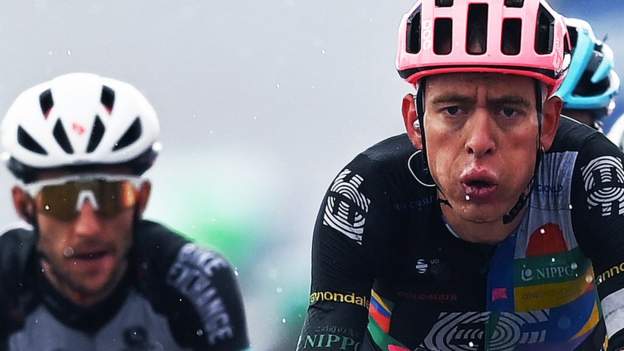 Britain’s Simon Yates and Hugh Carthy both gained time on a soggy stage six at the Giro d’Italia which saw another rider hit by a car.

Carthy of EF Education-Nippo is sixth, 38 seconds down, and Yates 49 seconds back in 10th for Team Bike Exchange.

Belgian Serry, 32, was furious after being struck from behind as the driver of the Bike Exchange car was passing an item through the window of an official race organiser’s car.

The incident comes just one day after Bahrain Victorious’ lead rider Mikel Landa suffered a broken collarbone and ribs after crashing with two other riders and a race marshal.

Hungarian Valter, 22, benefitted from a breakaway by the whole Ineos Grenadiers team at the top of a climb with around 35km to go in torrential rain.

Evenepoel, 21, has put in some superb performances on his Grand Tour debut, just nine months after crashing off a bridge and breaking his pelvis in Italy during the Il Lombardia one-day race.

Meanwhile, 2017 Giro d’Italia winner Tom Dumoulin will make a surprise comeback after announcing he would take a break from cycling in January.

The Jumbo-Visma rider will compete in the Tour de Suisse in June.