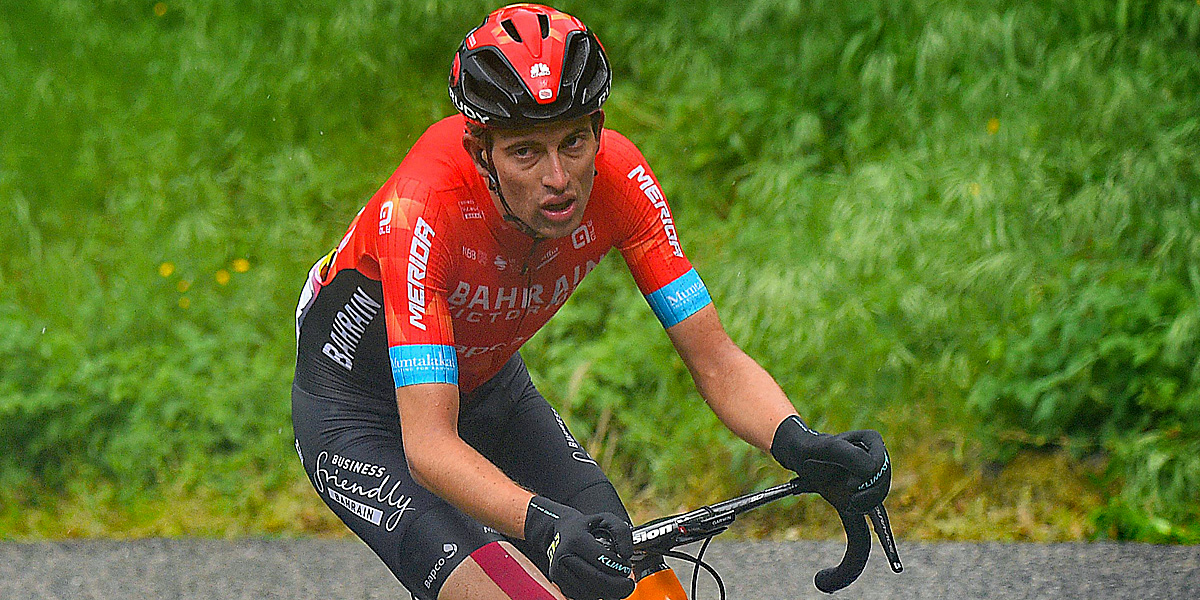 Giro d’Italia stage 6: It wasn’t just the weather that was changeable on stage 6 of the Italian Grand Tour, the overall ranking was turned upside down. Gino Mäder won the stage for the leaderless Bahrain Victorious team, but INEOS Grenadiers put the pressure on in the heavy rain to split the race for Egan Bernal. Alessandro De Marchi was blown out of the pink jersey to be replaced by Attila Valter of Groupama-FDJ as Remco Evenepoel (Deceuninck – Quick-Step) moved into second overall. 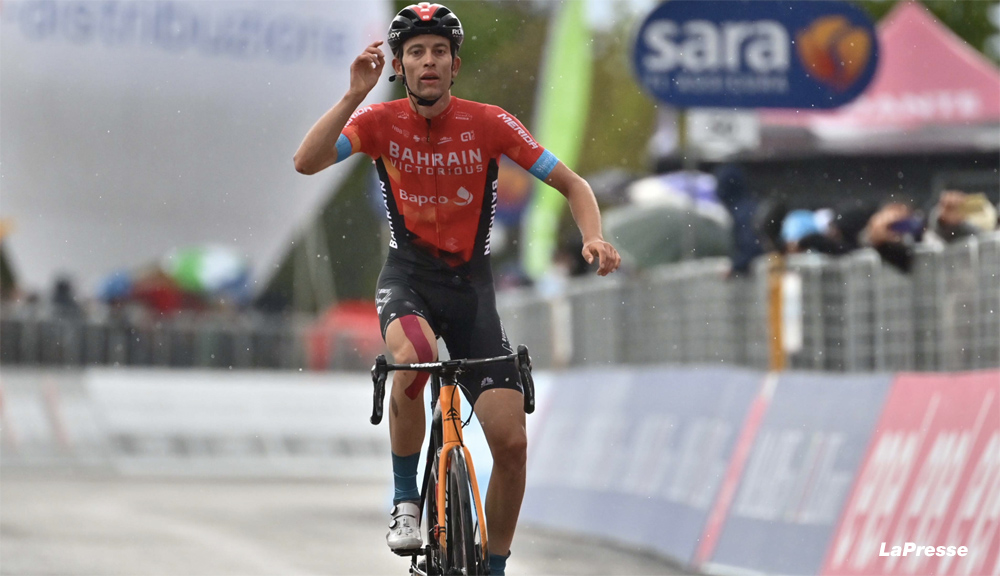 The sixth stage in the Giro d’Italia, finishing on the climb of San Giacomo, was won by Gino Mäder. The promising Swiss rider of Bahrain Victorious was in the early break that just stayed out of the grip of the big favourites. Attila Valter is the new pink jersey wearer. 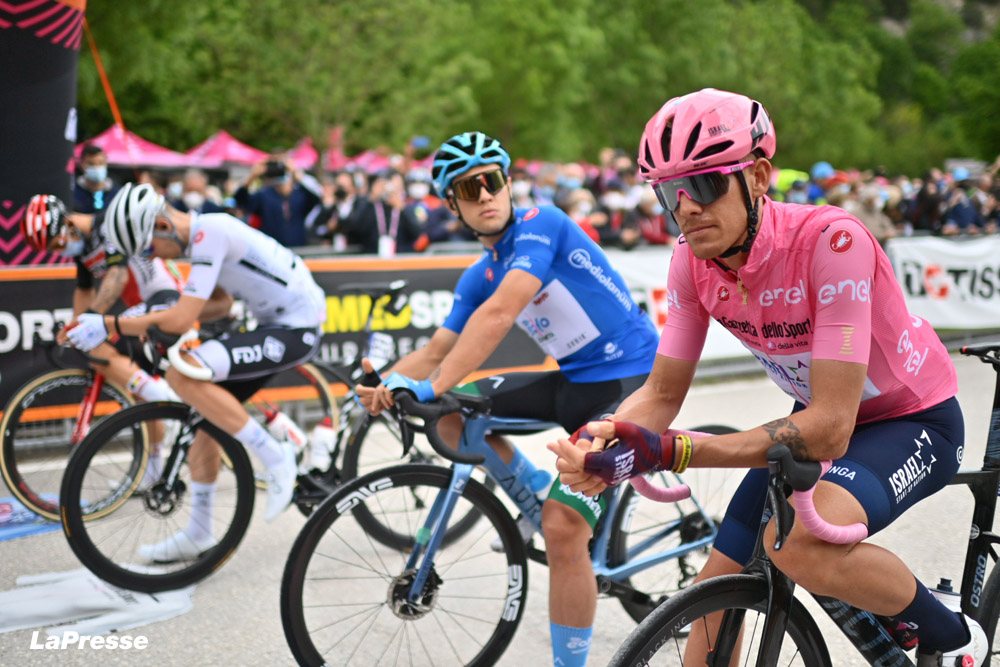 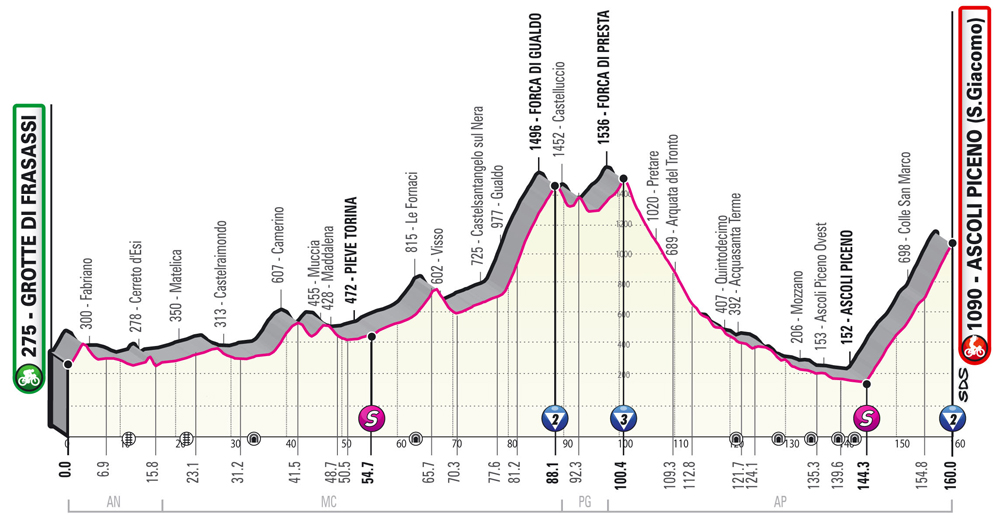 Giro stage 6 route: Running almost entirely through the inland, across the Apennines, the stage is demanding in both course and profile. The route takes in several ascents, including two categorised climbs. The main obstacles along the course are the ones typically found in urban areas. The final climb is approx. 15km long. The final kilometres are entirely uphill. Past Ascoli Piceno, the route rises steadily at around 5% up to Colle San Marco, and continues with slightly higher gradients all the way to the finish. 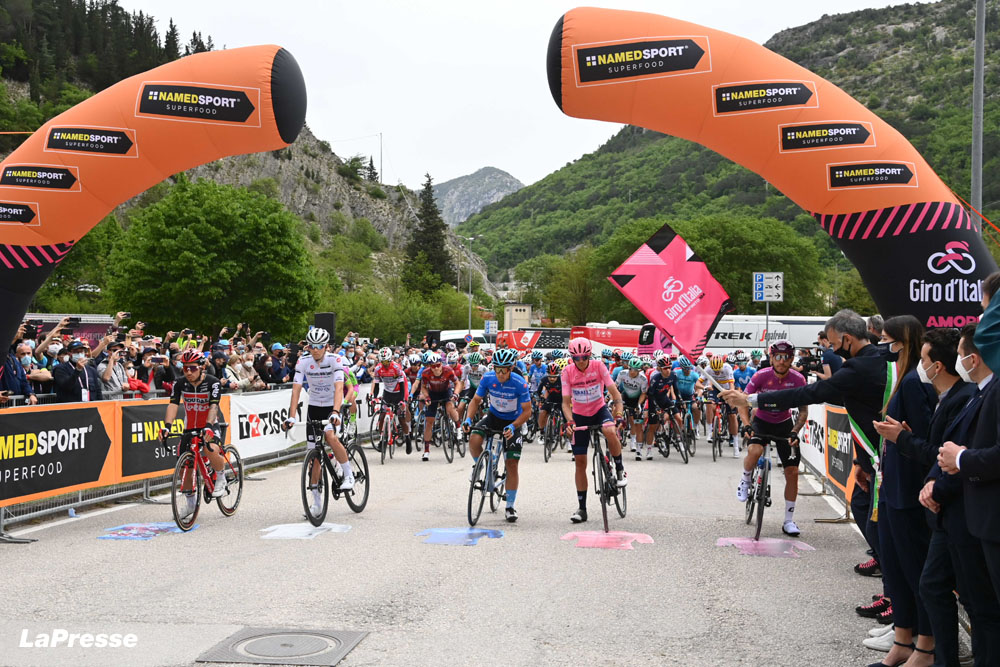 No Landa, Sivikov, Bidard and Dombrowski at the start

Without Mikel Landa, Joe Dombrowski, Pavel Sivakov and François Bidard, all victims of the chaotic and dangerous final of stage 5 to Cattolica, the peloton started stage 6. Many riders were motivated to get into the ‘break of the day’. However, the peloton had other ideas. 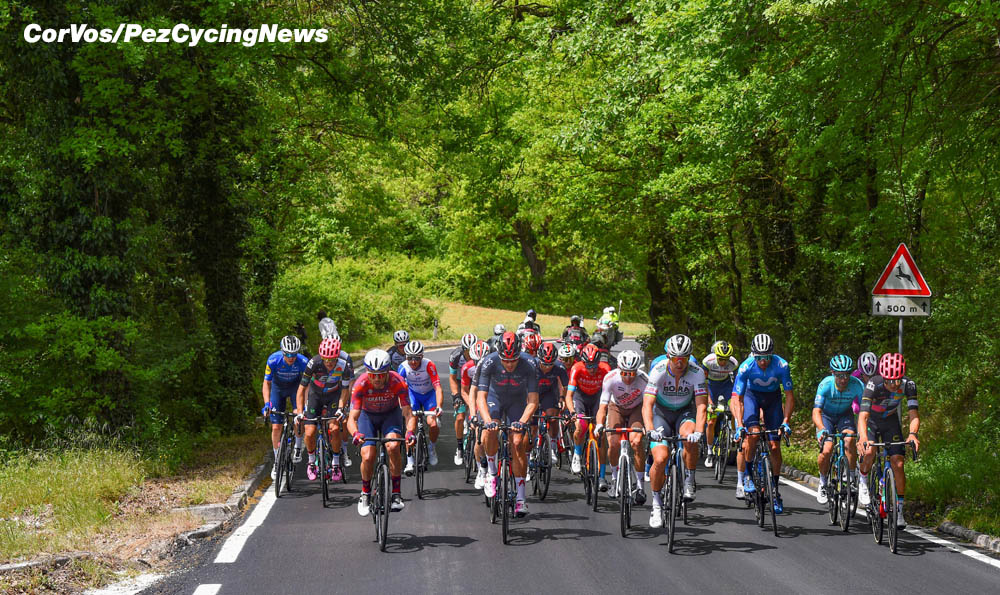 After 10 kilometres there was a first escape attempt by Peter Sagan, Filippo Ganna, Harm Vanhoucke, Bauke Mollema and Alberto Bettiol. These riders were part of a large leading group, but in the peloton the men of Israel Start-Up Nation wanted to pull them back. Bettiol, in 8th place at 1:37 from Alessandro De Marchi, was a dangerous customer for the pink jersey and so the move was finished. 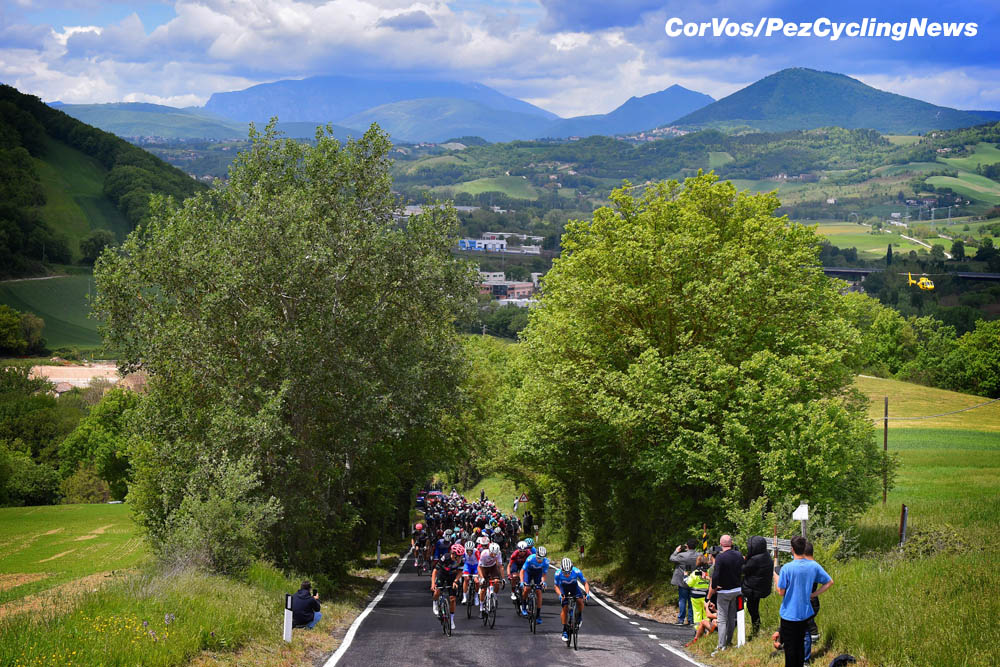 The pace remained high and after 25 kilometres there was a new attempt by Jimmy Janssens (Alpecin-Fenix), Matej Mohoric and Gino Mäder (Bahrain Victorious), Simone Ravanelli (Androni Giocattoli-Sidermec), Simon Guglielmi (Groupama-FDJ) and Dario Cataldo (Movistar). These riders managed to gain half a minute on the peloton and Mollema decided to ride across with Geoffrey Bouchard (AG2R Citroën), but the difference remained around twenty to thirty seconds for a long time. The peloton, led by Israel Start-Up Nation, were now 4 minutes down on the leaders. Mollema and Bouchard were still in pursuit of the six leaders. 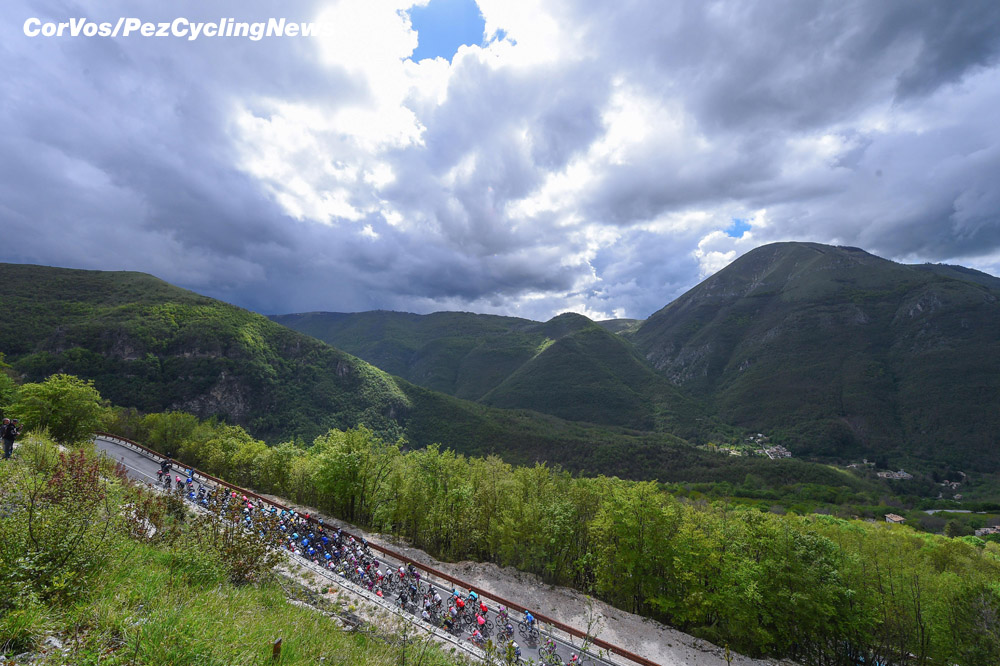 The peloton was on its way towards the bad weather

The two pursuers seemed not to be getting any closer, but Mollema and Bouchard refused to give up and after a good 30 kilometres they mane contact. No move was made from the peloton to close the gap and difference went up to more than 5 minutes. Swiss climber Gino Mäder became the virtual leader at one point, as the Bahrain Victorious rider started the day 3:58 down on De Marchi. On the Forca di Gualdo, the first categorised climb of the day, Bouchard was the first over the top, taking 15 KOM points. 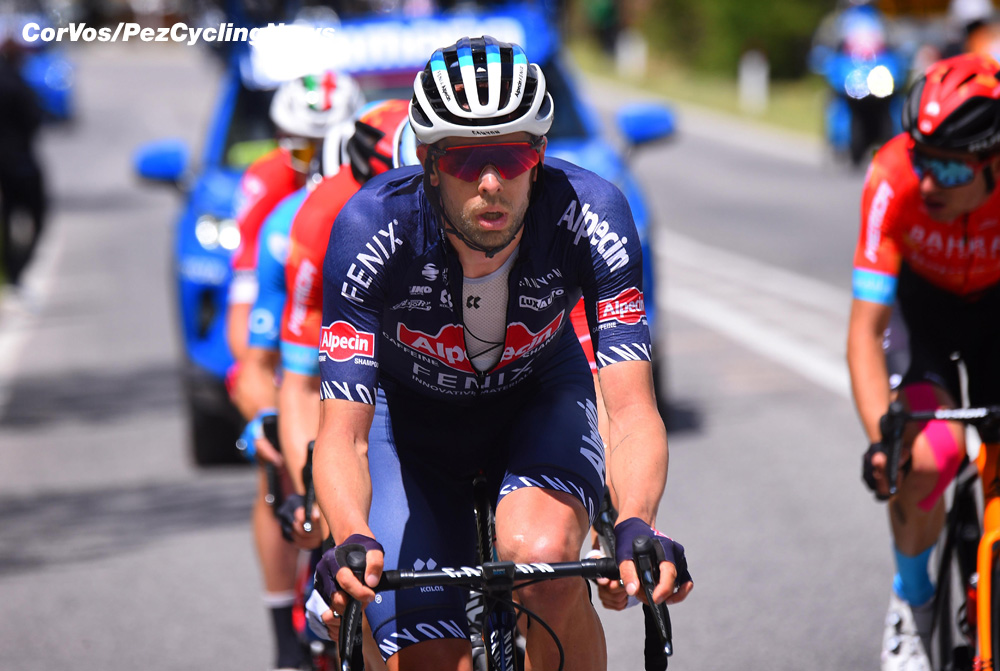 In the wet and treacherous descent of the Forca di Gualdo, it all hands on deck in the peloton. INEOS Grenadiers decided to continue on the descent and managed to completely split the peloton. Several groups tried to return, but the British team didn’t intend on easing off the pressure. One of the victims was the pink jersey De Marchi. 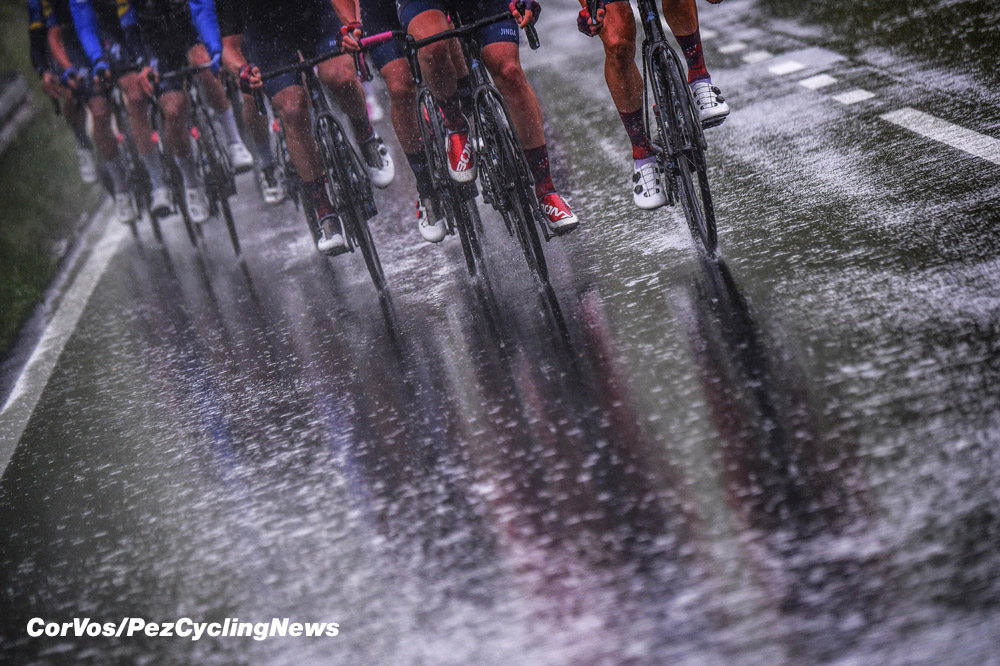 The Italian was too far from the front when INEOS Grenadiers increased the pace and was forced to chase. Evenepoel, Carthy, Vlasov, Yates, Bardet and the other top men, were on their toes and managed to survive the first selection. The lead of the break had now shrunk to about 2 minutes and the stage win could be anyones. 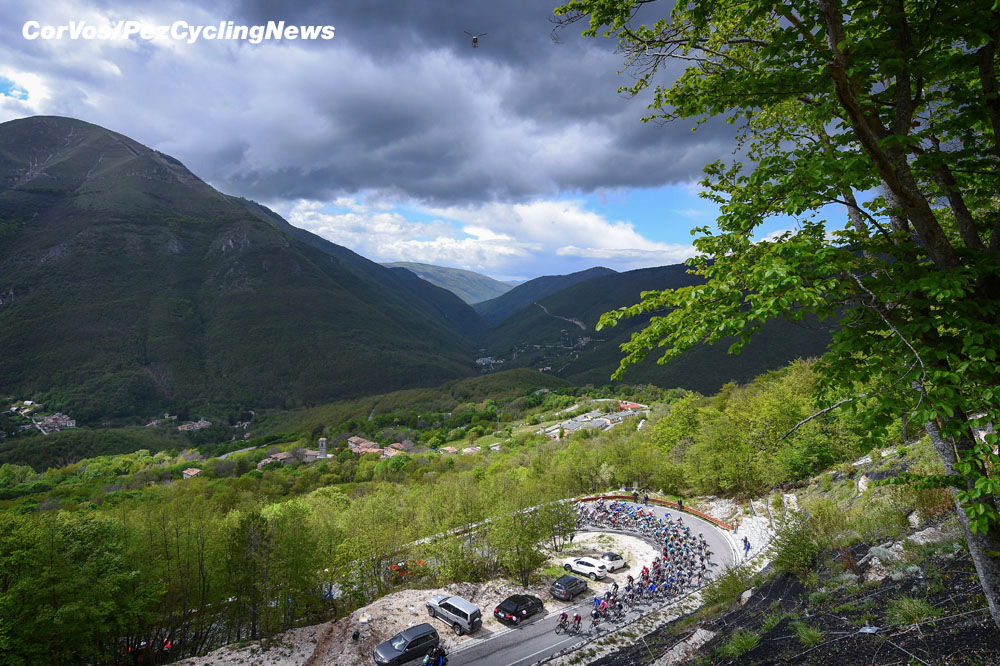 Once at the top of the Forca di Presta, the speed was very fast to the foot of the 15 kilometre long final climb. At the front of the race, Mohoric took things in tow and the Slovenian, together with Mäder, managed to ride away from the other escapees, although Cataldo and Mollema were eventually able to reconnect. Bettiol, Bardet and Giulio Ciccone decided to leave the INEOS led group. 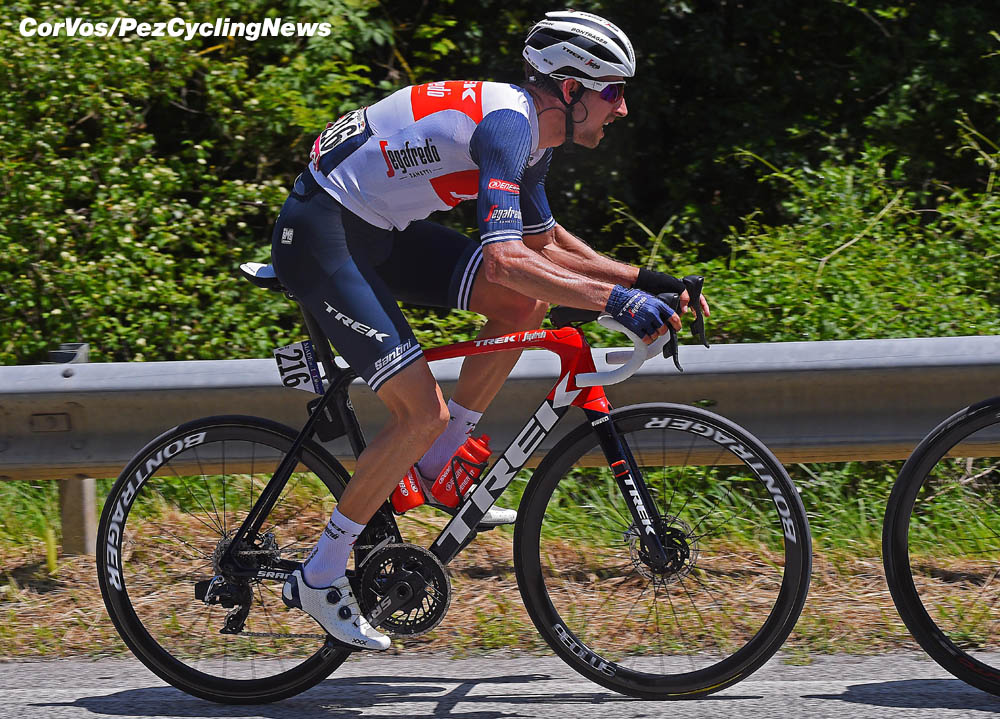 Mollema crossed to the break

Mohoric decided to ride himself into the ground for teammate and better climber Mäder and due to the hard work of the Slovenian, the Bernal group was not getting closer. The chasing group with Bardet, Bettiol and Ciccone were stuck at 2 minutes due to them not working together. The counter-attackers were caught by the second group with all the favourites before the final climb. 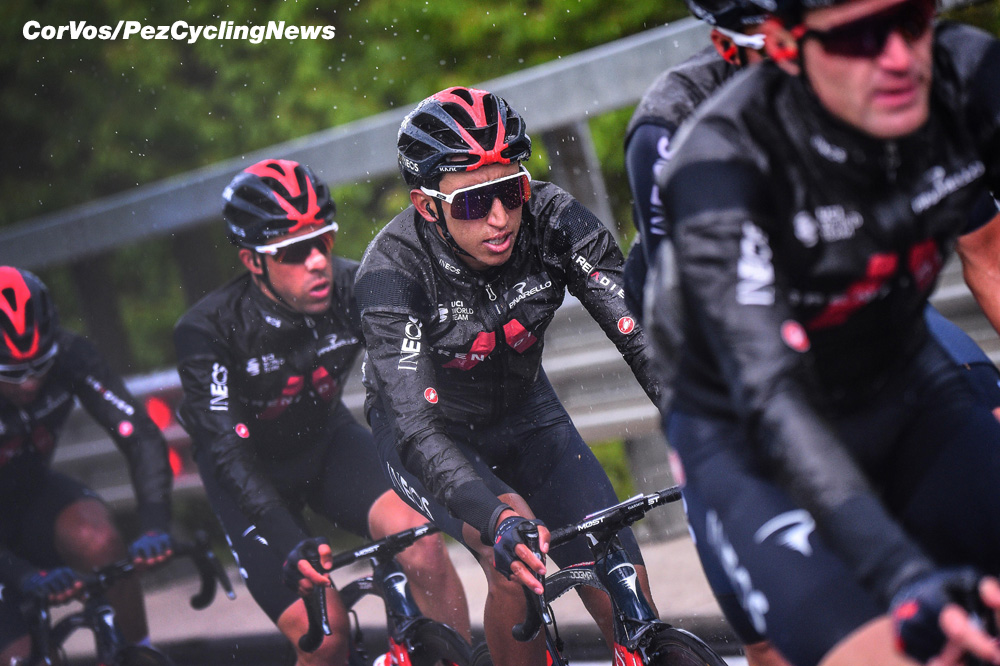 Mohoric, Mäder, Mollema and Cataldo started the climb of San Giacomo with 3 minutes in hand. On the final climb of 15.5km at 6.1%, Mohoric eventually ran out of fuel and left Mäder with his two fellow escapees. 5 kilometres from the top, the three front runners started the steep ramps of the climb and the battle for the stage victory started. Mäder was the first rider to accelerate. 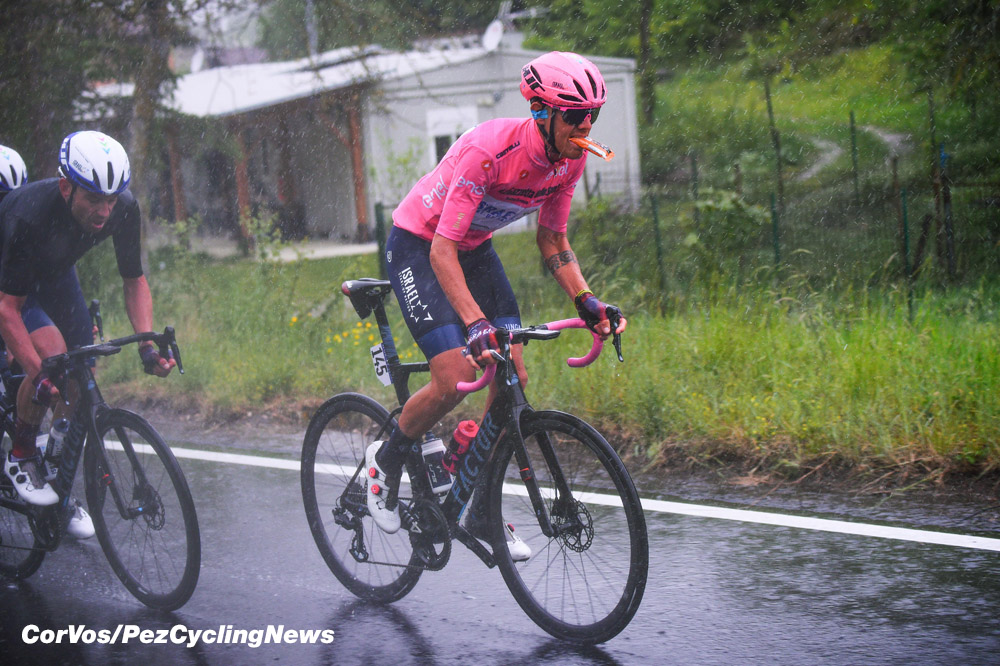 The pink jersey, Alessandro De Marchi was in trouble and in the wrong part of the race

The promising Swiss rider attacked 3.3 kilometres from the top and dropped Mollema and Cataldo. The Dutchman and Italian were unable to hold Mäder and lost more and more ground. Mäder managed to hold out in the last kilometre to take his first major victory. 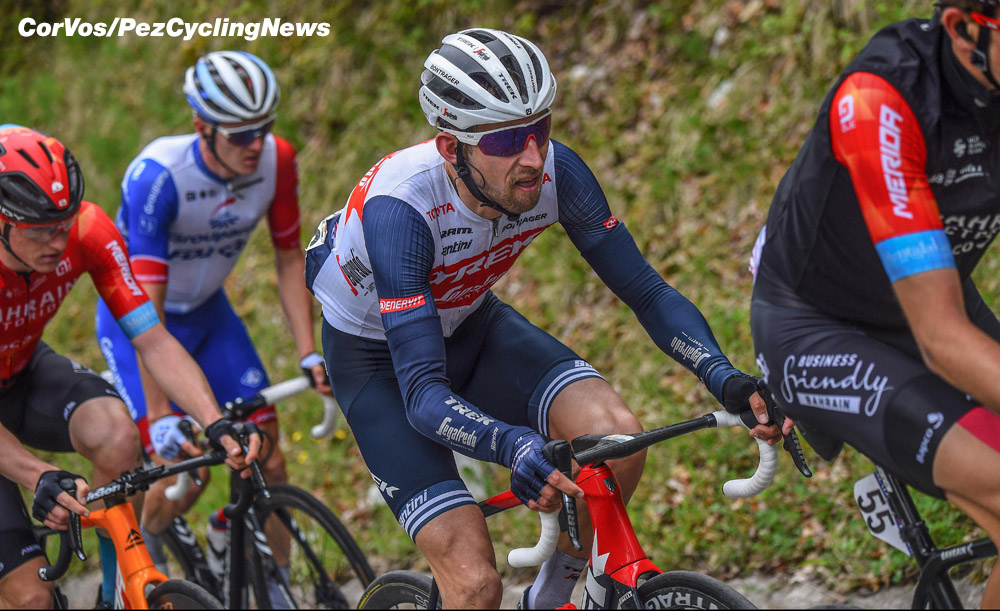 Mollema was the favourite in the break

In the favourites group, the pace accelerated again by the INEOS Grenadiers men. Filippo Ganna took care of the first kilometres and managed to pull the group into a long line. With more than 10 kilometres to climb, George Bennett was the first GC rider in trouble. The New Zealander, Jumbo-Visma team leader, managed to return with the help of Tobias Foss. 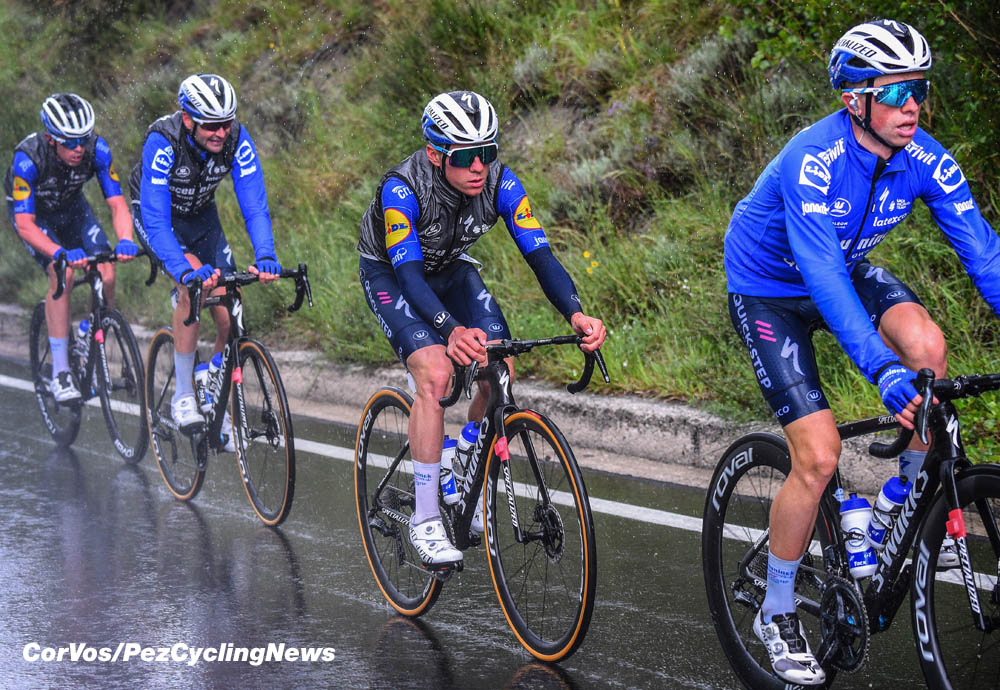 James Knox was looking after Remco Evenepoel in the peloton 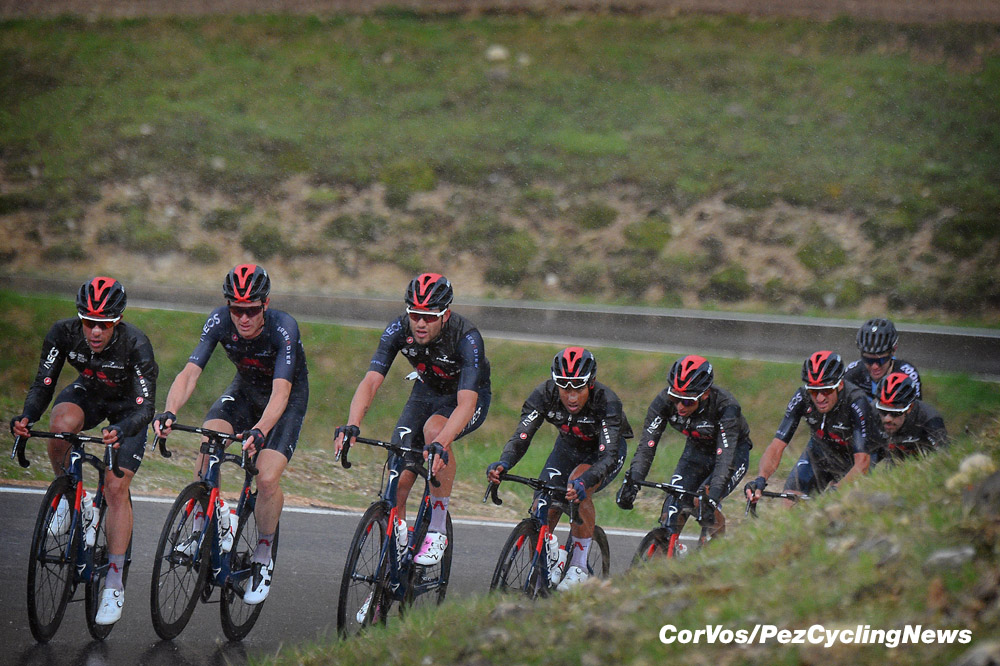 INEOS had a plan – TTT formation

On the steeper sections, the INEOS Grenadiers men were relieved by the Deceuninck – Quick-Step rider. The Belgian team clearly had plans for Remco Evenepoel and so it was up to Masnada to set a high pace. Daniel Felipe Martínez did not think it was fast enough and the Colombian rode away from the favourites group, possibly a springboard for his leader and fellow countryman Bernal. 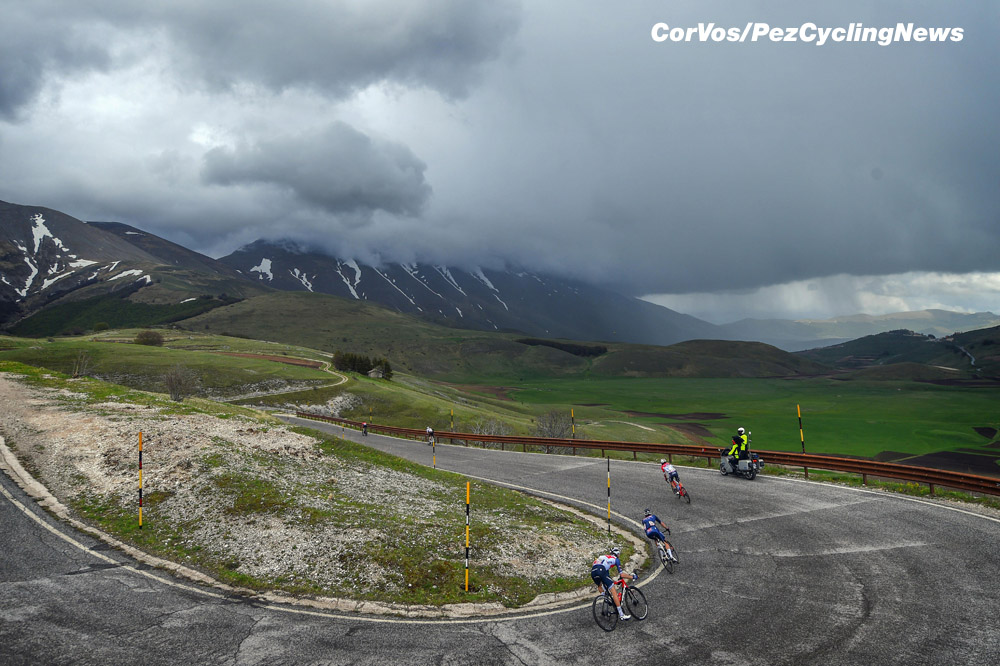 The break on the descent 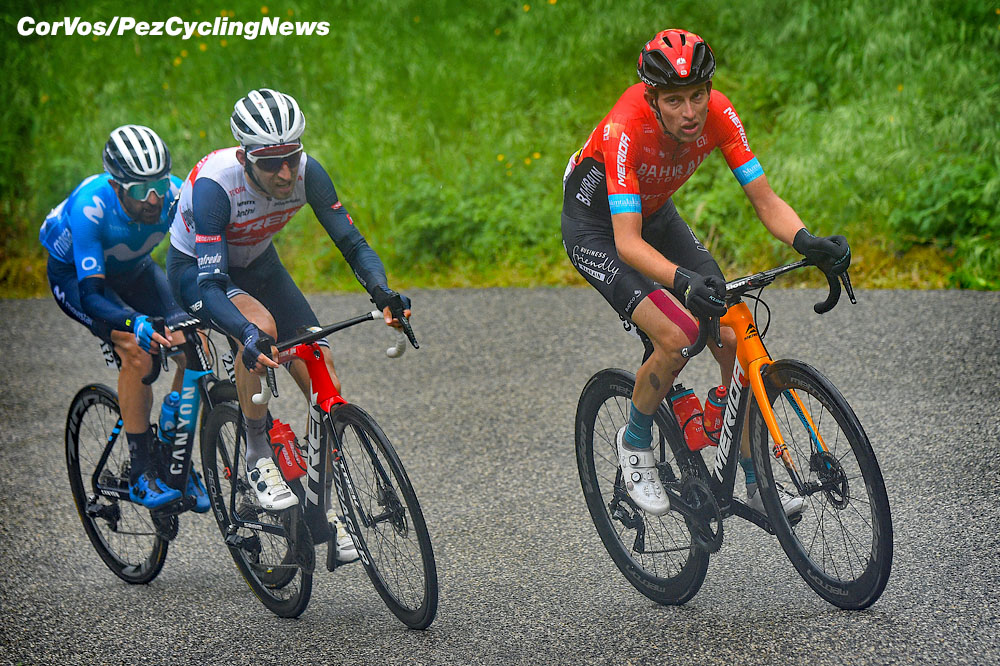 It was up to Almeida to thin the group a bit further and his pace proved disastrous for Jai Hindley. Last year’s second placed could not follow and lost precious seconds on the overall. Where Hindley cracked, Bernal decided to throw down the gauntlet. The Colombian took Ciccone and Evenepoel with him, but the other favourites were able to reconnect after a chase. Bernal continued his impetus and only Evenepoel, Ciccone and Dan Martin were able to follow the 2019 Tour winner. The four climbers came very close to Mäder in the last kilometer, but were not able to pull in the solitary Swiss rider. In the battle for the bonus seconds, Bernal finished second, ahead of Martin and Evenepoel, but it looked like Evenepoel might take the pink jersey. 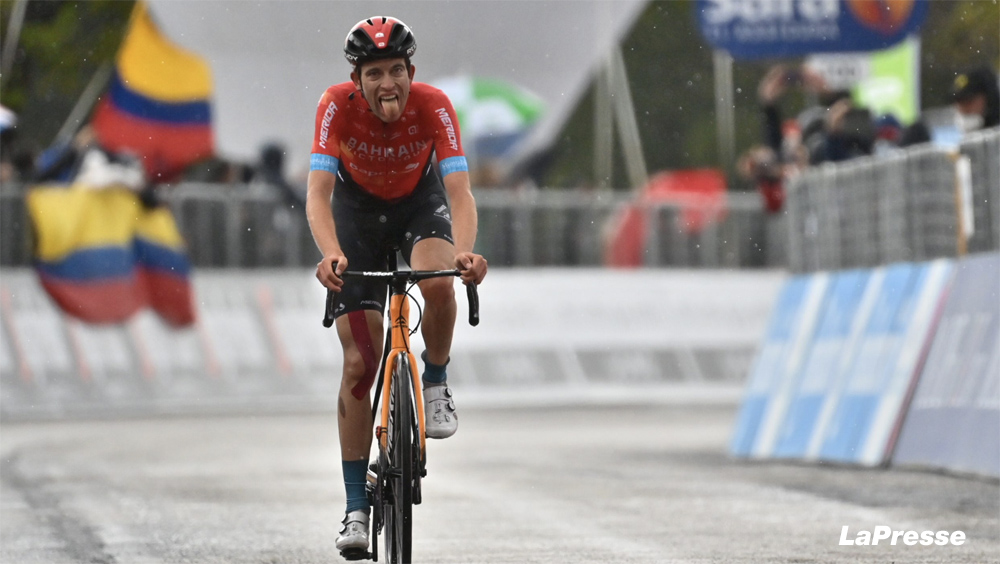 A hard day in the saddle for stage winner Gino Mäder

Behind; Attila Valter, the young Hungarian of Groupama-FDJ, managed to limit the damage and take the pink jersey from De Marchi. Evenepoel is now second overall at 11 seconds from the young Valter. Bernal is third, Vlasov and Louis Vervaeke are fourth and fifth. 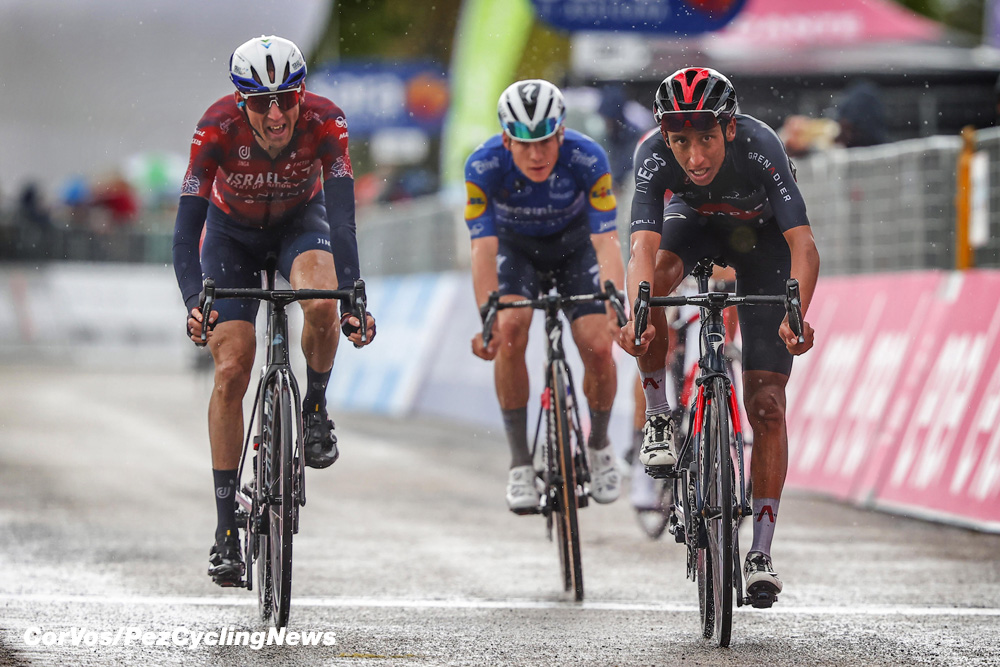 Stage winner, Gino Mäder (Bahrain Victorious): “Yesterday was such a sad day with us losing Mikel Landa. We decided to ride in his honour today. I managed to do this only because Matej Mohoric was so strong. In the finale I was scared to be caught like in Paris-Nice but it’s a beautiful win in the end.” 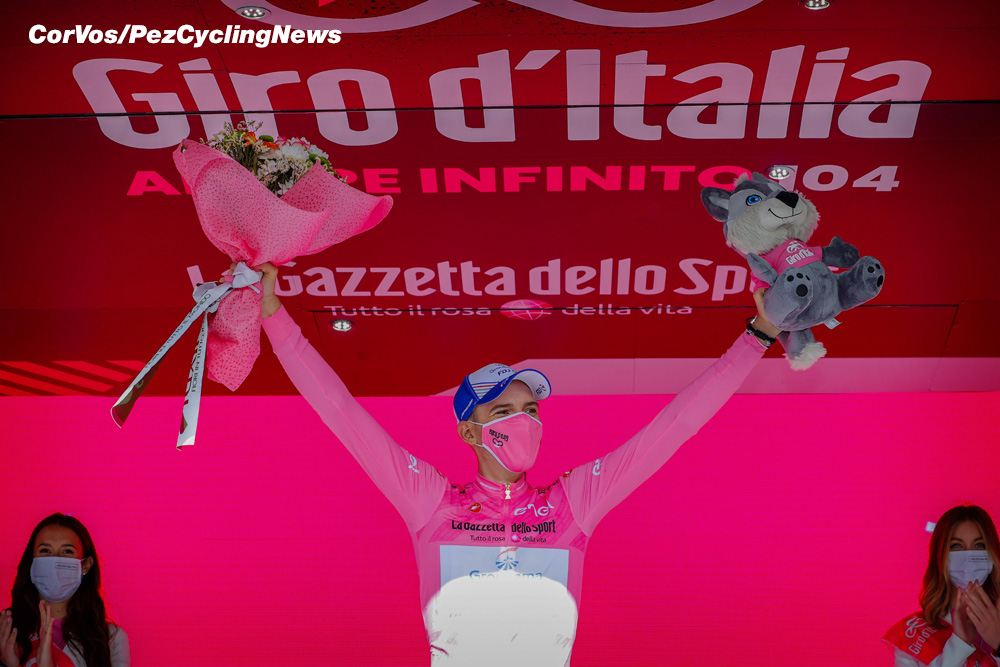 Maglia Rosa Attila Valter (Groupama-FDJ): “I knew that I had good climbing legs at this Giro. But I had to hold on to the biggest riders on the climb. I was very motivated to do it.”