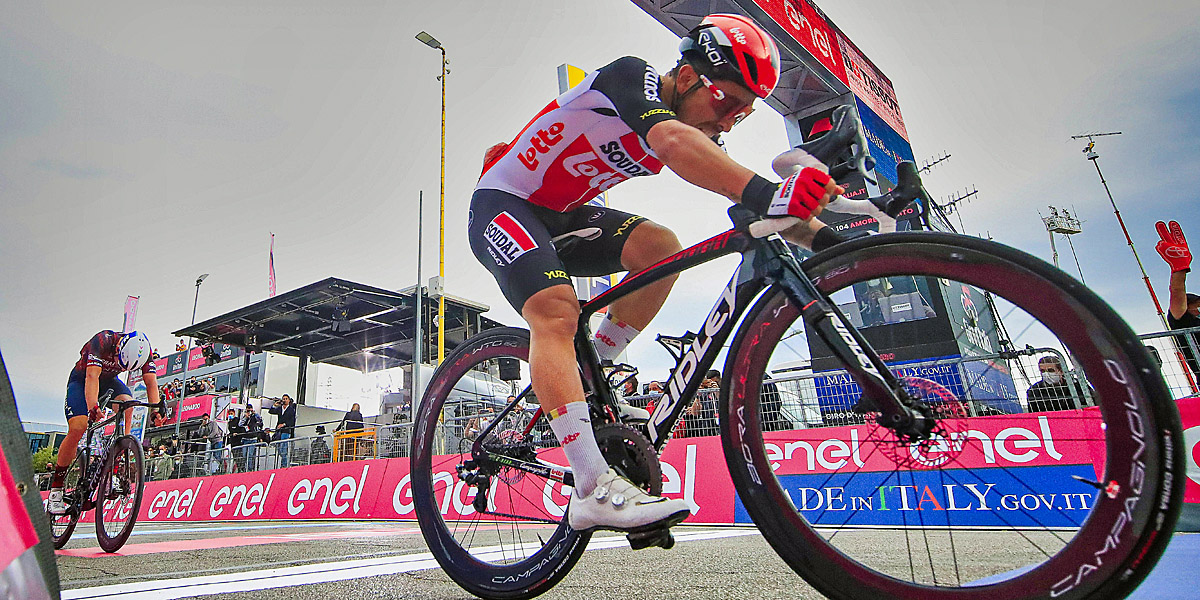 Giro d’Italia stage 7: At the end of a long and technical sprint it was Caleb Ewan who won stage 7 by a bike length from David Cimolai (Israel Start-up Nation). The sprint had been opened up by UAE Team Emirates’ Fernando Gaviria who took an early flyer, but the Australian had speed on his side. Attila Valter (Groupama-FDJ) held the overall lead. 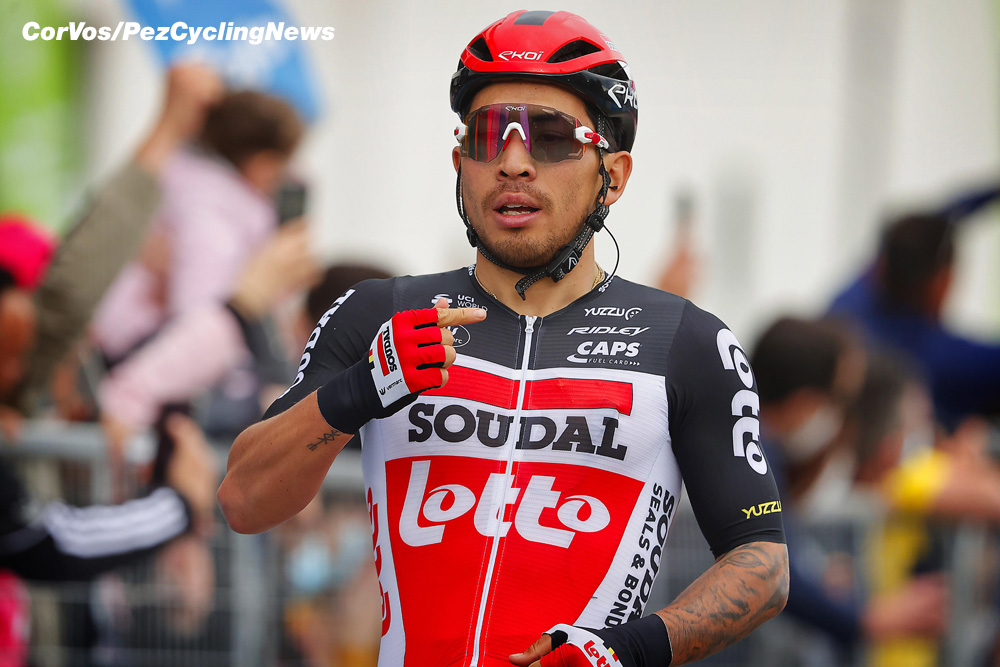 Caleb Ewan took his second stage victory in the 2021 Giro d’Italia. In Termoli no one could hold the Lotto Soudal Australian in the sprint. Davide Cimolai was second, Tim Merlier third. 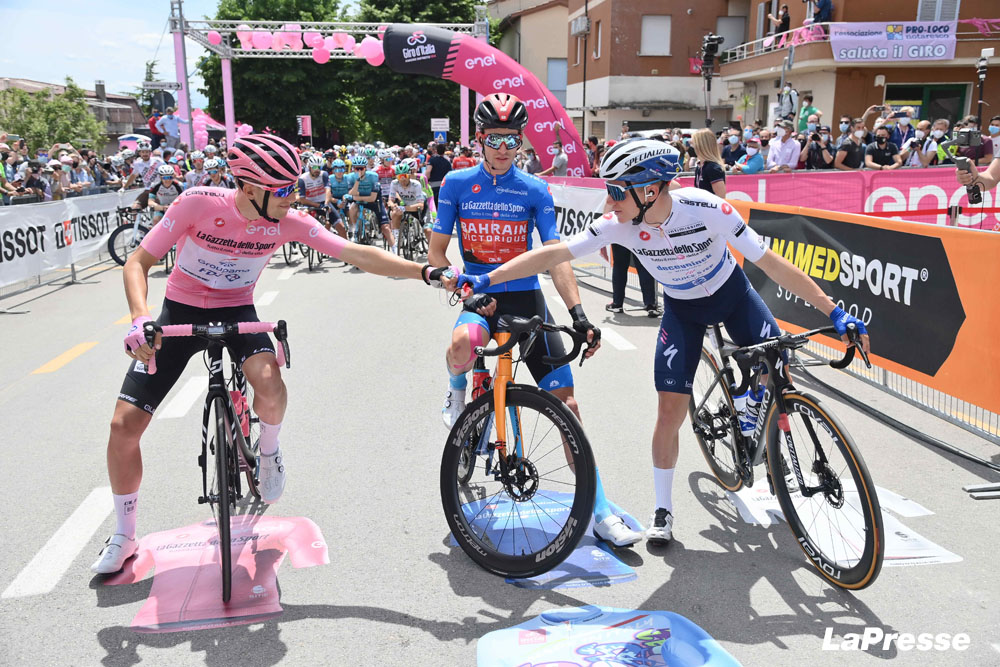 Giro stage 7 route: A hilly stage with a flat finale. After a short stretch in the hinterland, the route follows the Adriatic coast up to Chieti (KOM). A brace of bends and undulations then leads back onto the coast, all the way to Termoli. The last 3 km are raced on urban roads. After leaving the coastal road, the route takes in a 200m kick with 10-12% gradients, and then continues on a slight incline all the way to the finish. The route takes in a few sharp bends, and narrows briefly at the 800m mark, eventually merging onto the home straight. 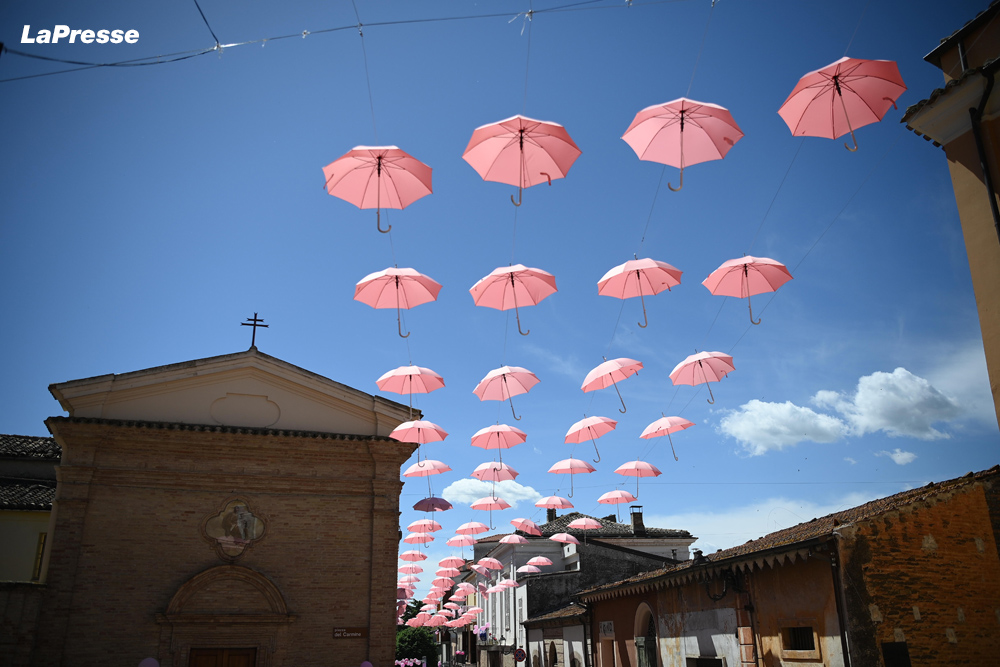 No rain today on the Giro – We hope 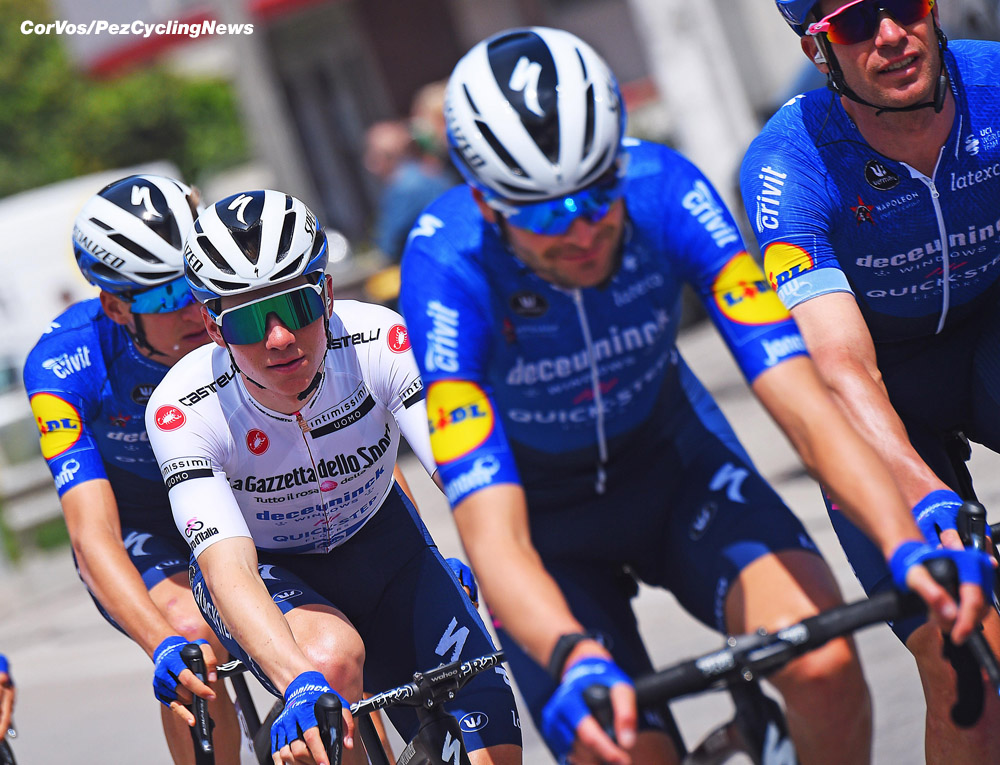 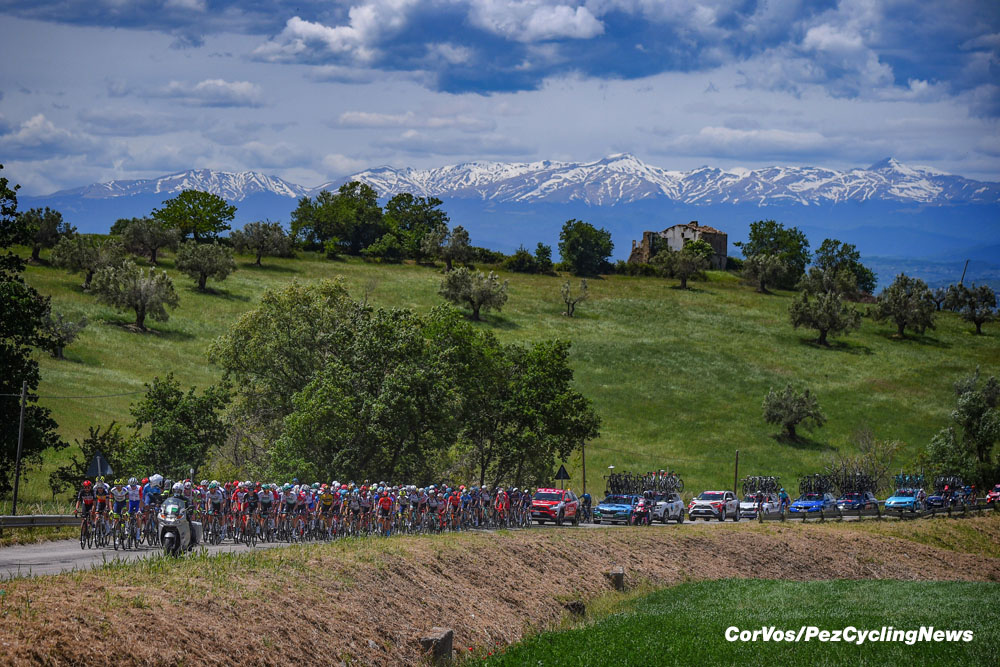 Not much climbing today

Domenico Pozzovivo was not at the start, the Qhubeka ASSOS rider had a hard crash yesterday and had too much trouble with his left arm to continue. Shortly after an hour the race proper got started and the first attack was not long in coming. Mark Christian from eolo-Kometa jumped away from the peloton to be joined by Simon Pellaud (Androni Giocattoli-Sidermec) and Umberto Marengo (Bardiani-CSF-Faizanè). Behind them the peloton was quite happy to let then go, this was the break of the day. 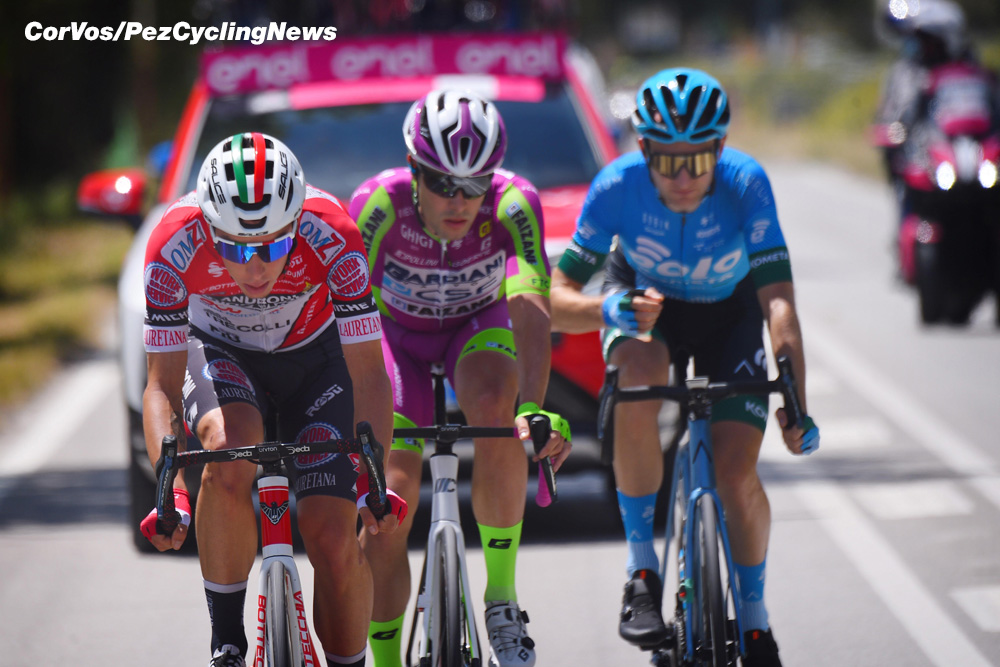 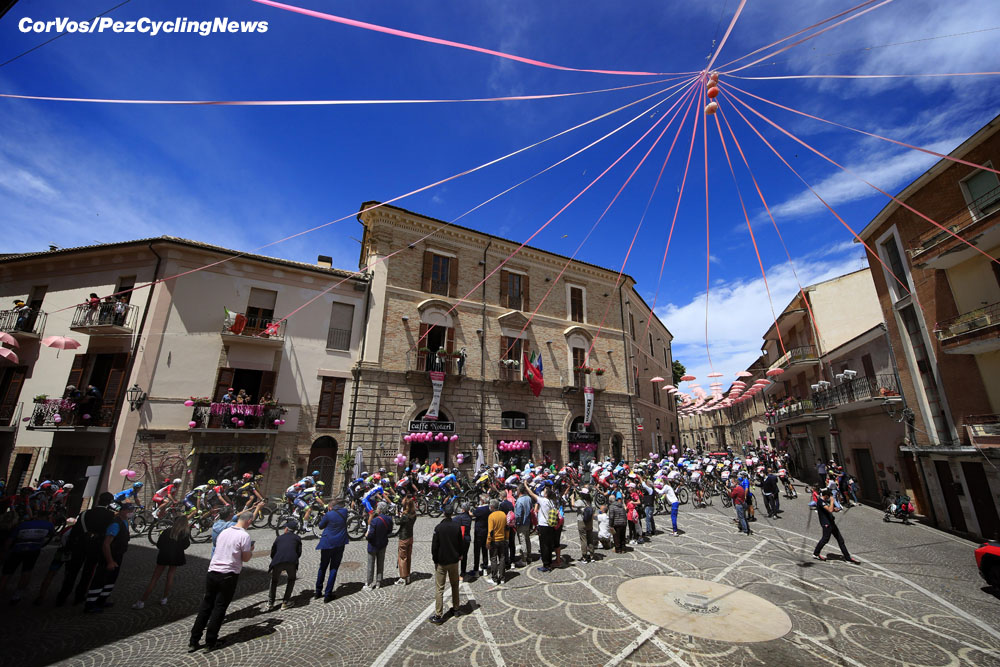 The fans are out, but not like it used to be

For Christian it was his first break in this Giro, but his escape companions already had a lot of attack kilometres in their legs. Pellaud was in the leading group in the third stage, from which Taco van der Hoorn eventually won, and in the fifth stage the Swiss rider was also on the attack. Marengo rode a long time off the front on the second day and on the fifth, both Pellaud and Marengo were high in the Fuga Bianchi rankings. 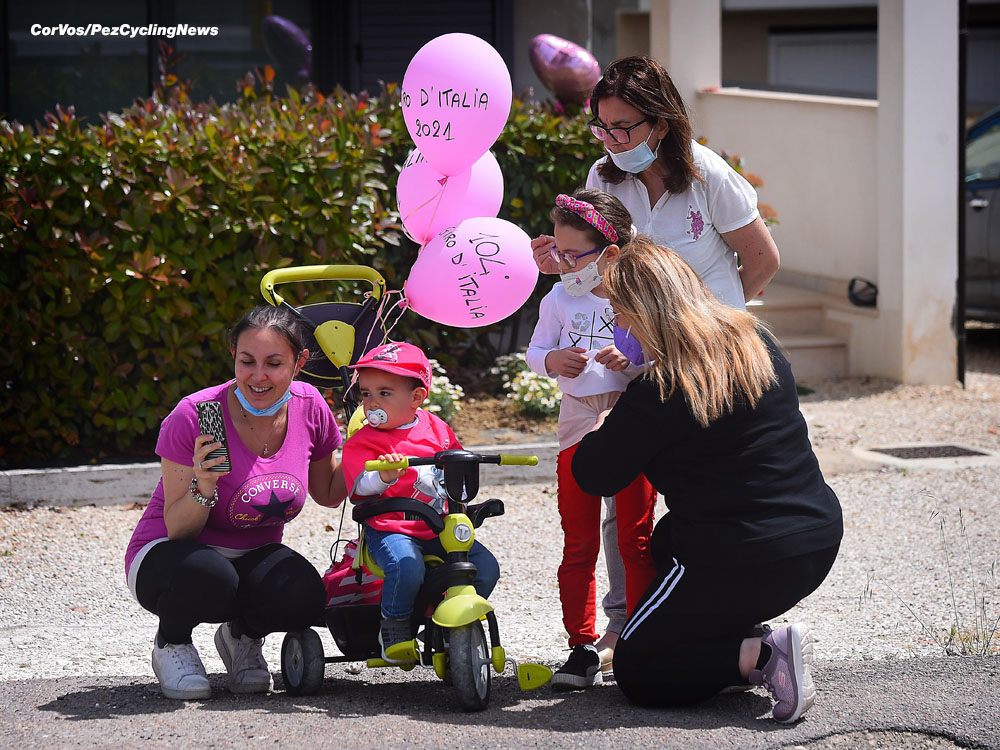 Still a big day for the bambini 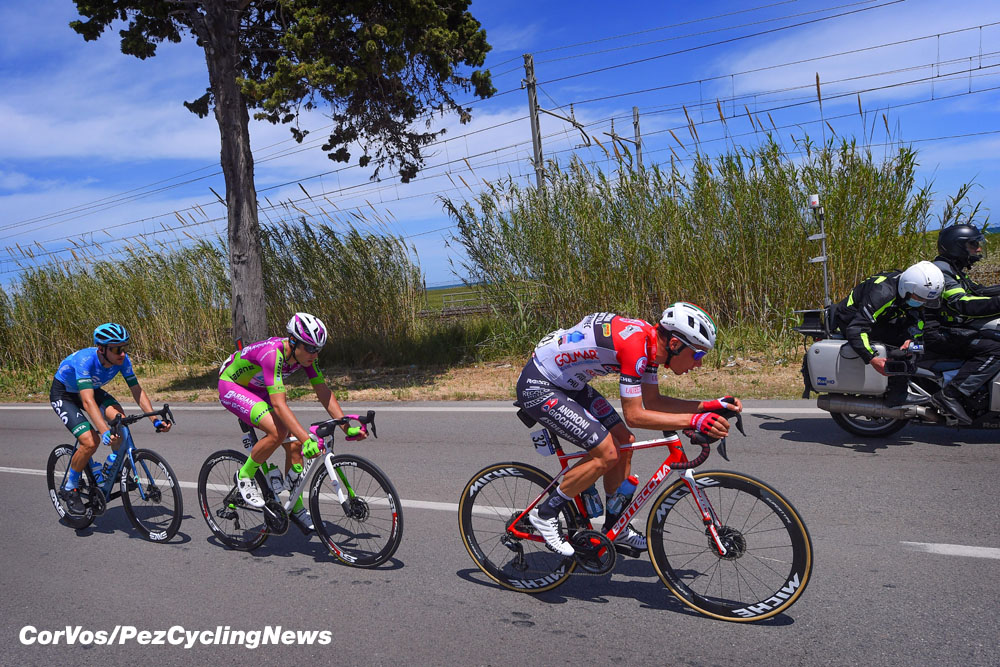 The break wasn’t allowed much time, a maximum of 4 minutes 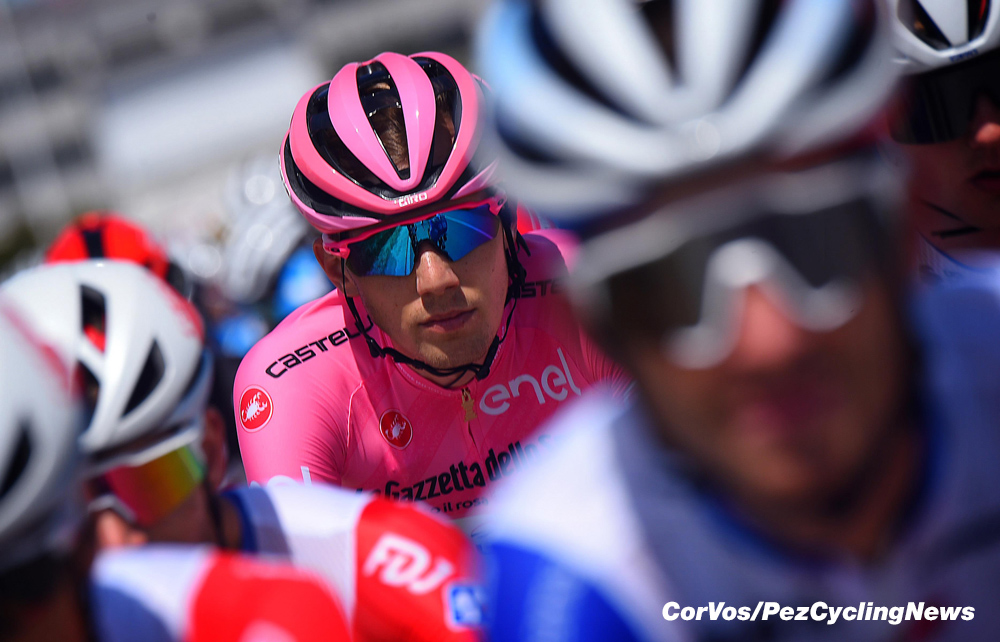 The lead of the three remained stable for a long time between 3 and 4 minutes. The only mountain sprint of the day was in Chieti. Pellaud and Christian wanted to make it a fight, with the Swiss rider taking the three points. Marengo was satisfied with the last point. In the peloton, Giulio Ciccone took advantage of coming through Chieti to greet his fellow townspeople, the Trek-Segafredo climber, eighth overall, was born and raised there. 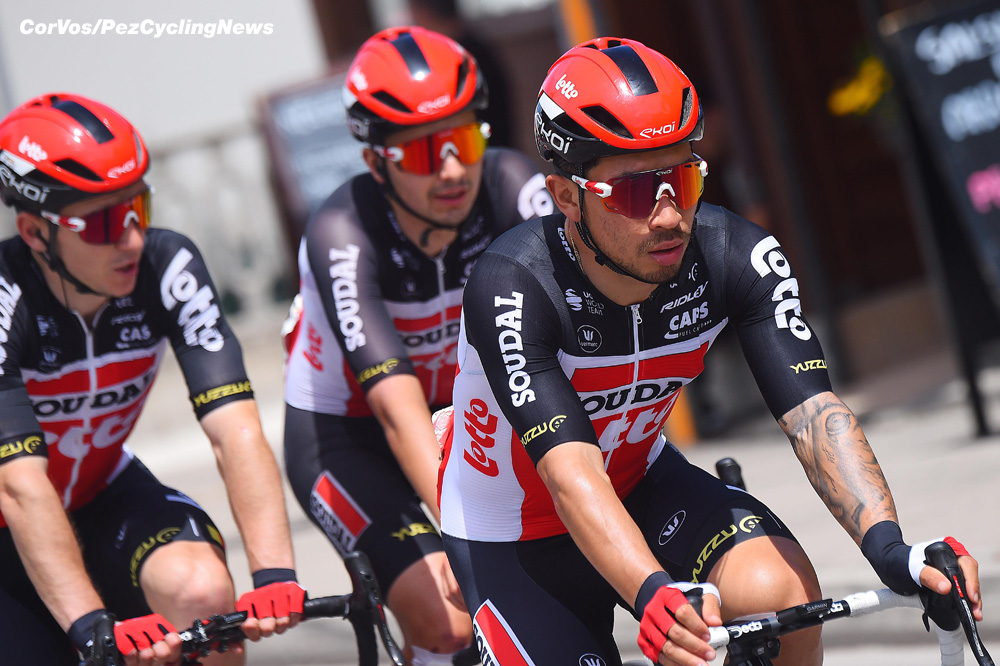 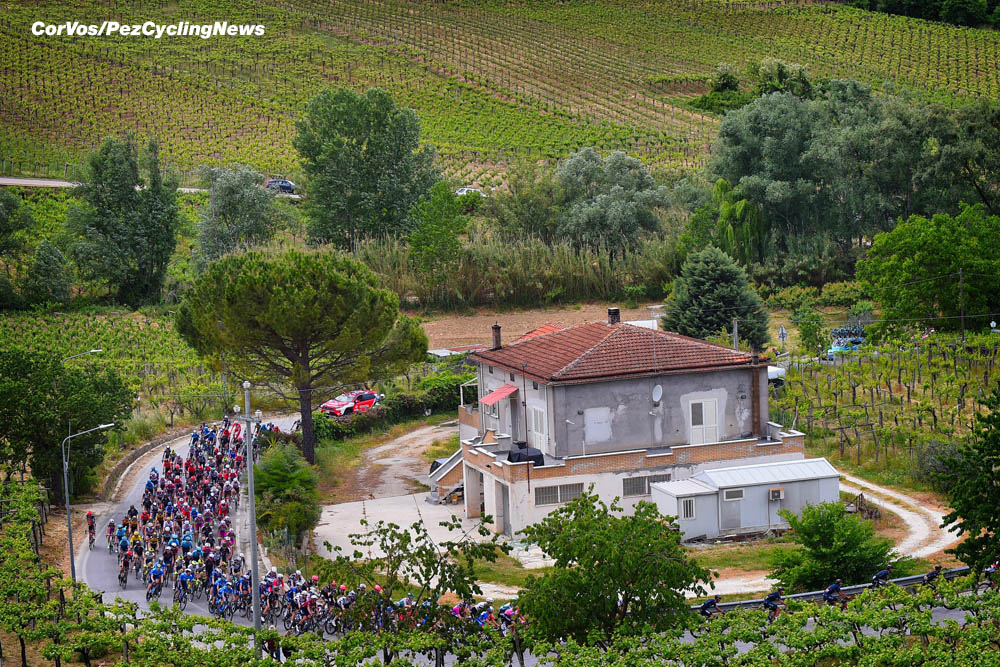 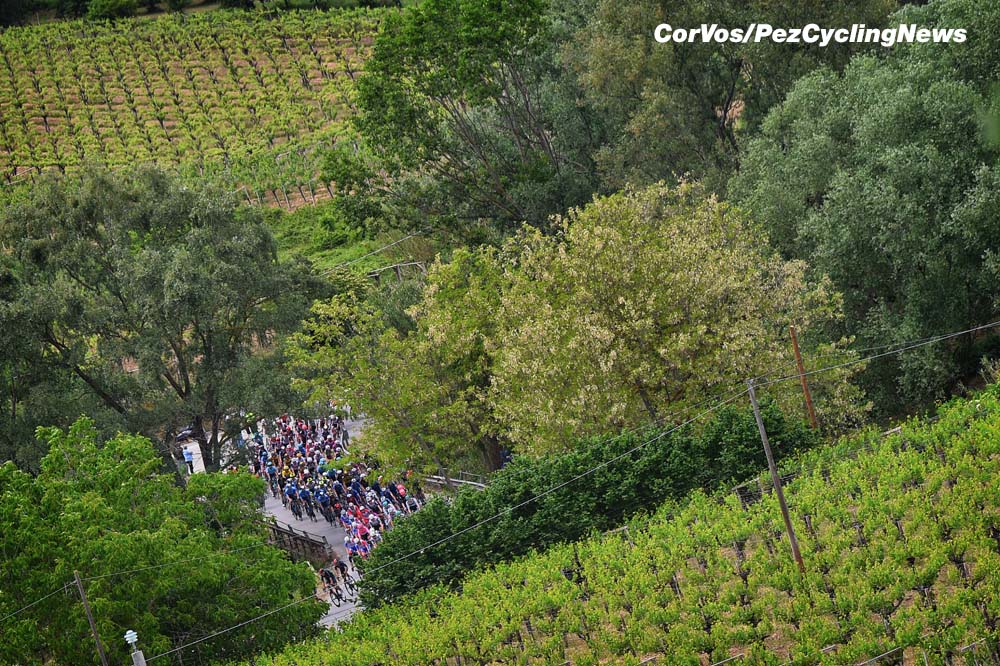 After 93 kilometres the breakaway hit the intermediate sprint in Crecchio. Marengo went for a long sprint and took full points, ahead of Pellaud. Christian made no effort for third. Their lead was only 1 minute, as the peloton had started to chase. Peter Sagan wanted to go for the Maglia Ciclamino points and jumped away with his teammate Daniel Oss, Filippo Fiorelli and Mauro Schmid. The Slovakian multi-World champion took fourth and five points. 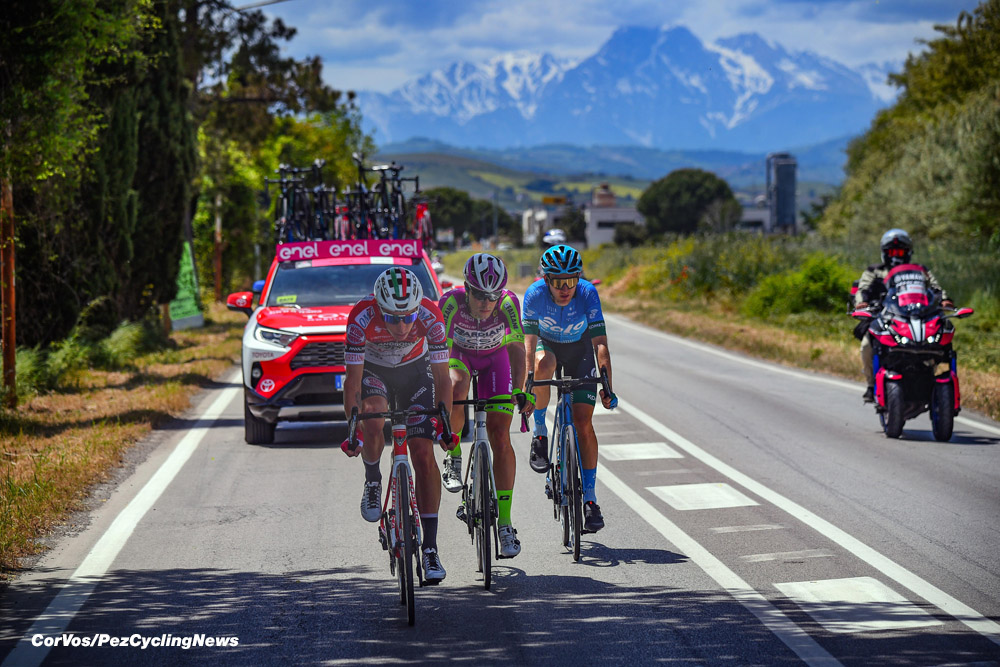 The break was never going to go all the way to the finish, but they were away a long time 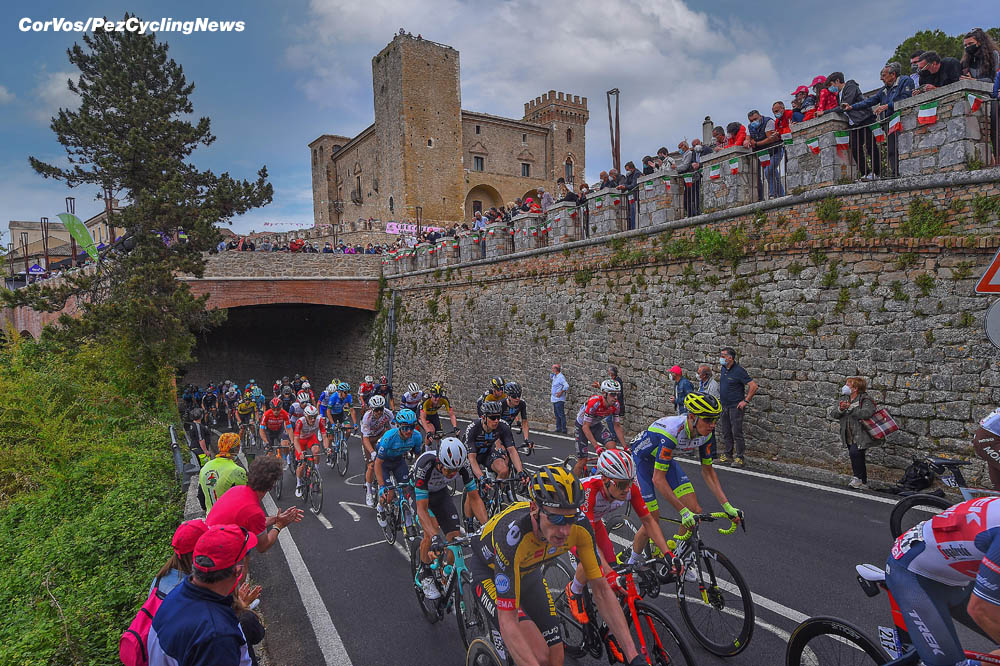 The peloton wasn’t on a day off, but it was much easier than yesterday

After the sprint, peace returned, allowing the three escapees to grab a little more time. Behind them, Lotto Soudal, Alpecin-Fenix, UAE Team Emirates and Qhubeka Assos set the pace. After 125 kilometres, Marengo beat Pellaud in the bonus sprint, the last intermediate sprint of the day. There was still 55 kilometres to the finish and the peloton started to accelerate. The leading group was allowed to ride ahead for a while, but with 17 kilometres to go everything was together. 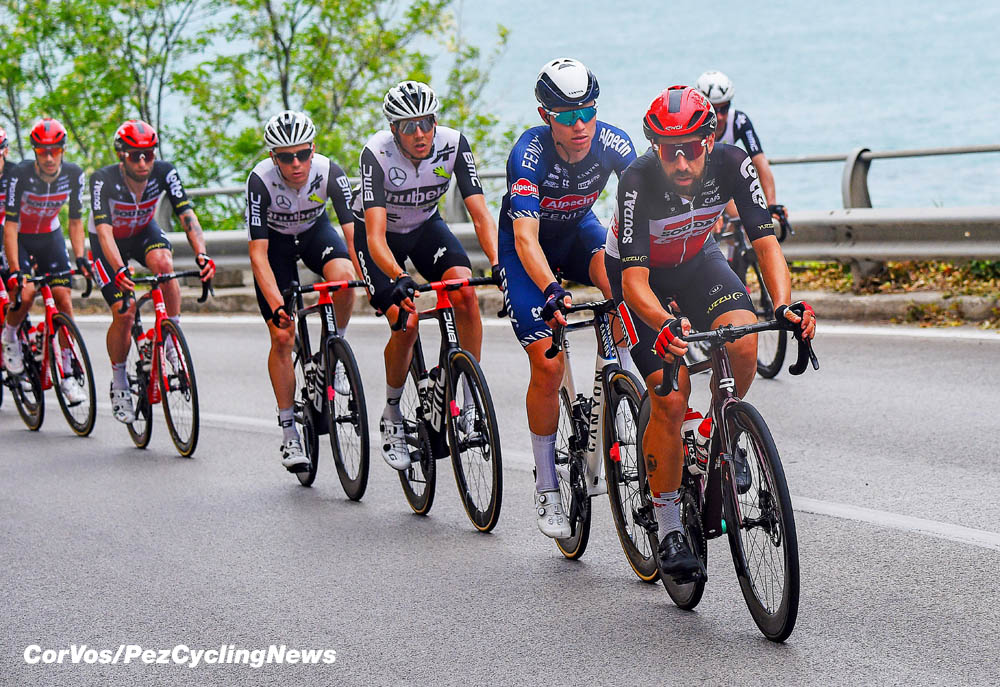 With less than two kilometres to go, the peloton turned off the coast and into the centre of Termoli. There the road ramped up at 12% over 200 metres. Albanese attacked with Vincenzo, but Daniel Oss jumped on the wheel like a watchdog. Oss then started the sprint, after which Fernando Gaviria went for a very early jump. Caleb Ewan was not surprised and rode to the Colombian others on his wheel. The Australian had power left in his legs to leave everyone behind for his second stage victory. 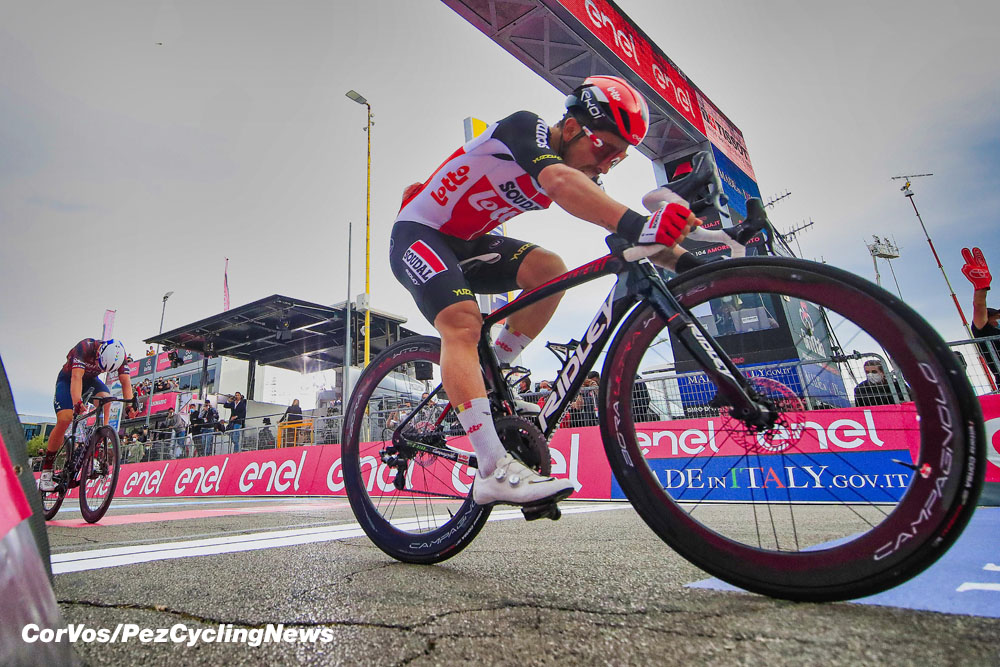 A stunning win from Caleb Ewan 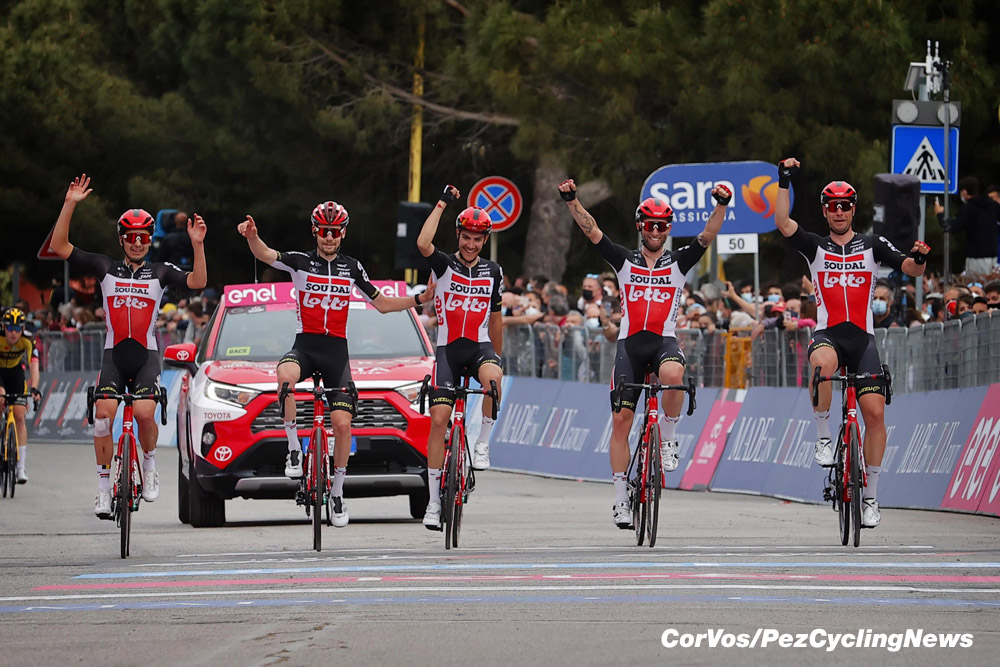 Stage winner, Caleb Ewan (Lotto Soudal): “I knew it would be a good finish for me. Then it was a question of being smart and a lot of team work too. All my guys went from a long way out. We had to stay in the front for the last 10km. The start of the climbing was the most important part. It was a super hard finish and I had to go deep to win today. My legs were absolutely burning.” 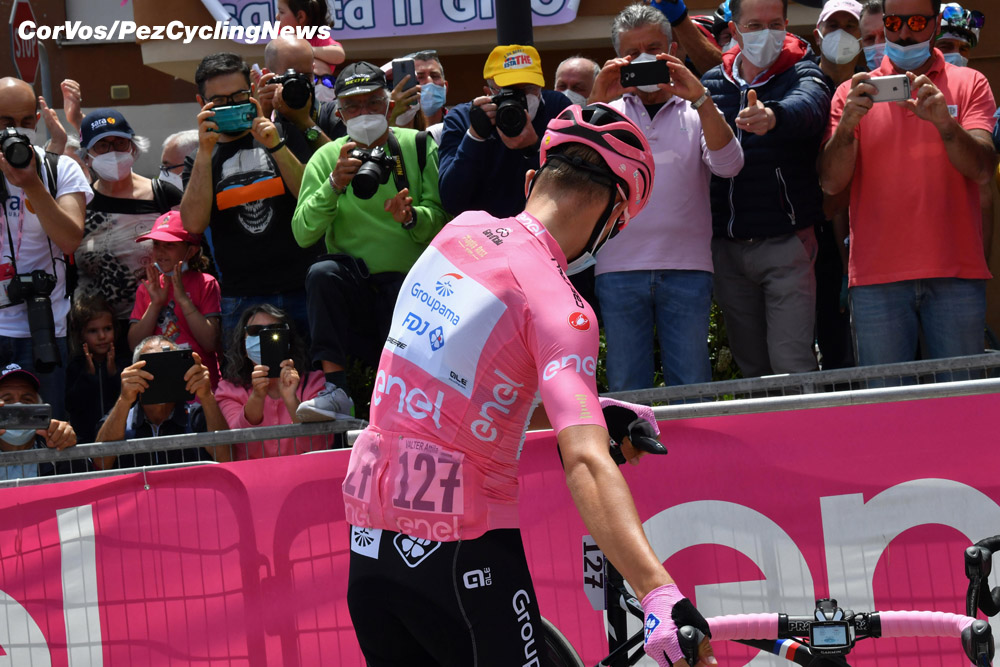 Maglia Rosa, Attila Valter (Groupama-FDJ): “I wasn’t nervous. I felt lucky that I could enjoy my day in the Maglia Rosa. The team always kept me in the front. I felt like a different rider with the jersey. I felt very respected in the peloton and I want to thank all the riders for their congratulations. To pass through the beautiful cities of Italy with people cheering for the Maglia Rosa, I had to pinch myself to realise that it was really me.”