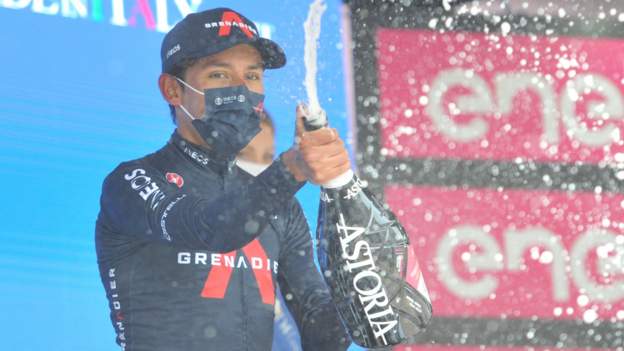 Colombia’s Egan Bernal took the overall lead in the Giro d’Italia after storming to victory on the ninth stage.

The 2019 Tour de France winner got his first win of the season as Hungary’s Attila Valter – the previous overall leader – lost pace on the final ascent.

In the standings, Bernal is 15 seconds clear of Remco Evenepoel in second.

Stage nine saw Bernal gain 12 seconds on British pair Hugh Carthy, in 12th, and Simon Yates, in 14th. Carthy is sixth in the overall standings, and Yates is eighth.

Ireland’s Dan Martin is eighth overall, having finished the stage in fifth, 10 seconds behind the Colombian.

Bernal, who is returning to his best form following a string of back problems, said: “I cannot believe what just happened.

“I made a lot of sacrifices to get where I am now. I was thinking I would do well today but I was not sure whether I could have won the stage.

“My team-mates had a lot of confidence in me, they told me I could do it. This victory is for them, they really believe in me.”

Slovenia’s Matej Mohoric was taken to hospital in a neck brace after a horrific downhill crash that snapped his bike in two.

Mohoric, 26, appeared to hit a crack in the road while at the front of an early breakaway group, then hit a corner and was sent somersaulting, landing on his head.

The Bahrain Victorious rider got to his feet and initially considered continuing on a spare bike, but then abandoned the race and was taken away in an ambulance.His team said in a statement: “He has been taken to the hospital by ambulance for radiological diagnostics.

“He is being kept under observation according to UCI concussion protocol.”