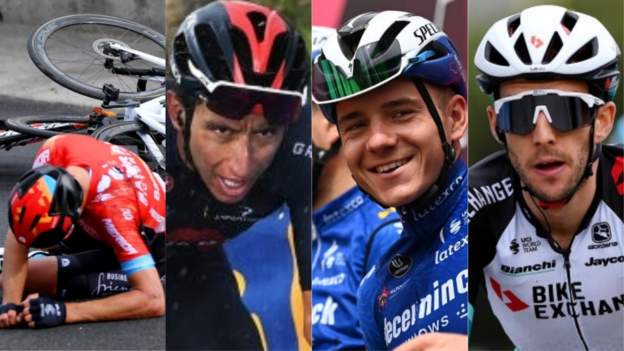 One rider struck by a car, a painful early exit for a key contender, a signal of intent from Egan Bernal – and could we see the comeback of all comebacks from one of cycling’s most exciting talents?

The first Grand Tour of the year is under way and there’s been plenty to unpack in an eventful opening 10 days at the Giro d’Italia.

BBC Sport takes a look at some of the biggest talking points so far as the 21-stage battle for the maglia rosa takes its first rest day.

‘It ain’t about how hard you’re hit’

Concerns over rider safety were never far from the headlines as three big incidents overshadowed the Giro’s opening stages – 10 years on from the death of Belgian rider Wouter Weylandt at the race.

During stage six on Thursday, Deceuninck-Quick Step’s Pieter Serry was hit from behind by the Bike Exchange team car as the driver attempted to pass an item through the window to an official race organiser’s car.

That barely believable incident saw the driver excluded from the race and the team fined 2,000 Swiss Francs – or £1,573. Serry, thankfully, was able to recover and finish the stage.

Only a day earlier, Bahrain Victorious’ lead rider and general classification contender Mikel Landa was involved in a nasty collision which left him with a broken collarbone and ribs.

The crash, which occurred in the closing stages as the road narrowed, involved two other riders – stage four winner Joe Dombrowski of UAE-Team Emirates and AG2R-Citroen’s Francois Bidard, who both later left the race – and a marshal, who had been signalling for a traffic island.

While a host of new safety measures has been introduced for the 2021 season, Israel Start-Up Nation’s Alessandro de Marchi – then in the pink jersey – described the finish to the relatively flat 177km stage five as “a crazy circus” and “too dangerous”.

That was not the end of Bahrain’s concerns, however, as Matej Mohoric was taken to hospital after a crash that left him being the second rider to abandon the race in a neck brace after Landa.

Slovenian Mohoric somersaulted head first over his handlebars as he clipped a corner on a descent, landing on his neck, which caused a minor concussion and his bike to break into two pieces.

“I had tears in my eyes on the start ramp,” said Deceuninck-Quick Step’s 21-year-old Remco Evenepoel. “It’s been a long journey and to finally be able to start my first Grand Tour makes me very happy.”

Simply making the Giro was a huge achievement for the young Belgian after he fractured his pelvis in a horrific crash off a bridge during the Il Lombardia race in August.

Regarded as one of cycling’s most exciting talents, Evenepoel won every stage race he entered in a hugely successful 2020 season before it was cruelly ended and, somehow, just nine months on from that accident he’s in contention to execute a sensational comeback, currently in second in the general classification.

So, things are shaping up rather nicely, with the top nine riders all within one minute of the lead at the first rest day.

Among those riders are British pair Hugh Carthy and Simon Yates, in sixth and ninth respectively, as both seek to emulate compatriot Tao Geoghegan Hart’s memorable triumph last year.

EF Education-Nippo’s Carthy, 26, is 44 seconds down as he looks to build on his third-place finish at the 2020 Vuelta, while 28-year-old Team Bike Exchange rider Yates lies 55 seconds behind – a place and four seconds behind Ireland’s Dan Martin.

Somewhat surprisingly, it was 22-year-old Hungarian Attila Valter who assumed control of the pink jersey on the soggy sixth stage, but by Sunday Ineos Grenadiers’ Egan Bernal took it from him in impressive style with victory on stage nine’s final uphill gravel section at Campo Felice, to sit 15 seconds clear of Evenepoel.

A tearful Bernal paid tribute to his team-mates afterwards, saying: “They told me I could do it: this victory is for them – they really believe in me.”

Weirdly, for someone who won the 2019 Tour de France, it was the 24-year-old Colombian’s first Grand Tour stage victory – coming after a difficult year in which he suffered back problems which caused him to retire early from the last year’s Tour after blowing up on stage 15’s big climb up the Grand Colombier.

Just as well Bernal has rediscovered his climbing legs – the race is now finely poised ahead of a second week that includes an ascent of the mighty Monte Zoncolan on stage 14 – one of the sport’s the toughest ascents.