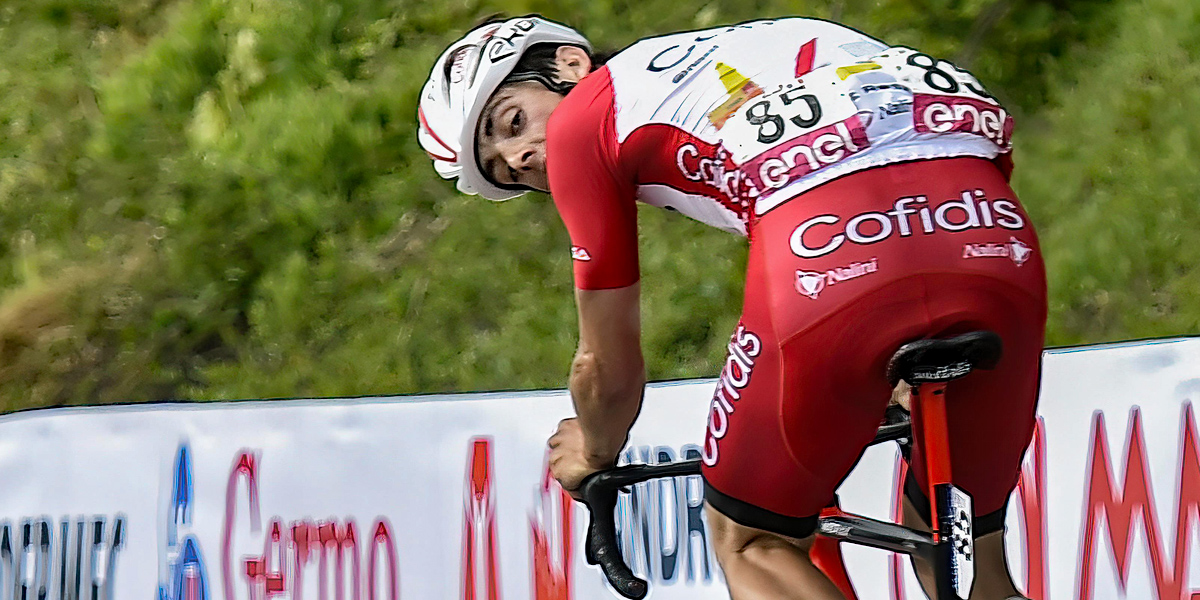 Giro d’Italia stage 8: Saturday is a good day for the break to go all the way to the finish, and to day the escape men had their dream come true. A group of nine held the peloton at 5 minutes to the base of the final climb. The attacks soon came, but it was Victor Lafay who won the stage for the Cofidis team. Francesco Gavazzi (eolo-Kometa) was second. Attila Valter (Groupama-FDJ) kept his pink jersey. 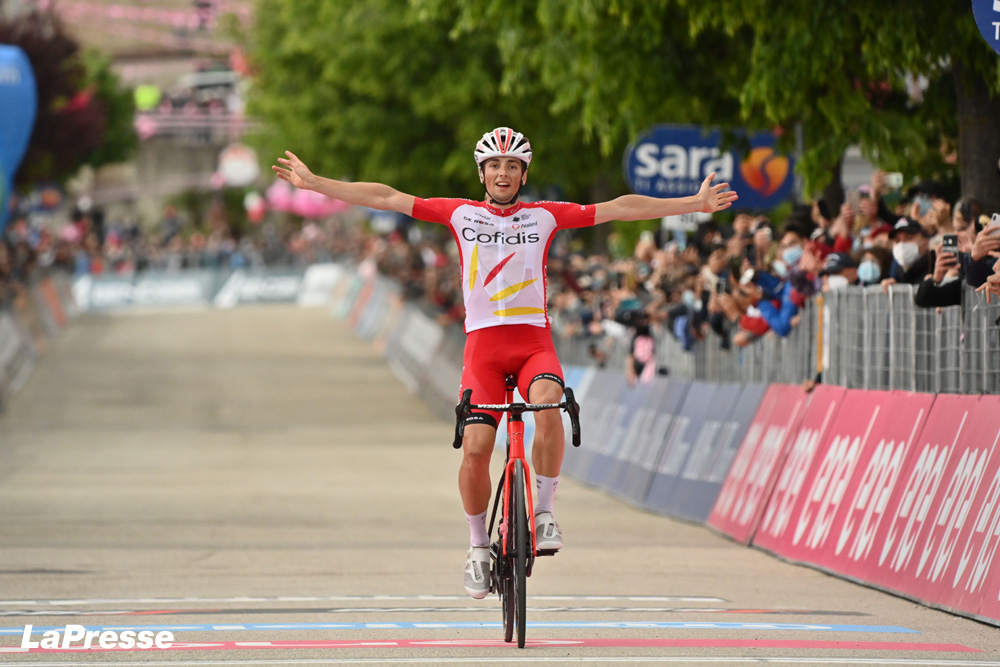 Victor Lafay won the eighth stage of the Giro d’Italia from the early break. On the final climb, the 25-year-old Cofidis rider rode to his first professional victory. Francesco Gavazzi and Nikias Arndt raced to the second and third place. The favourites kept their powder dry. 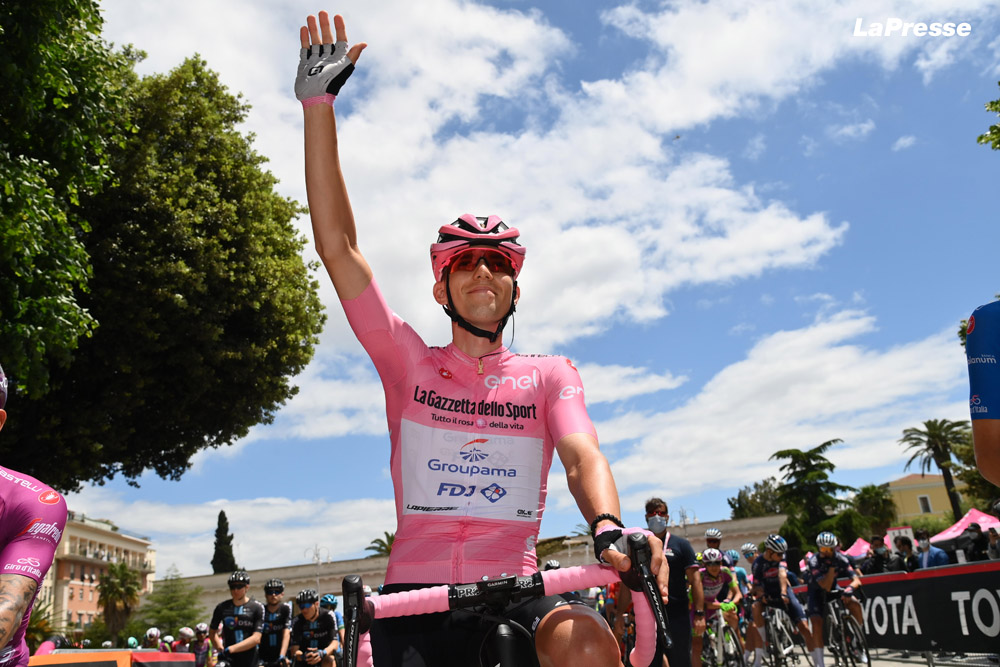 Will Attila Valter still be in pink at the end of the day? 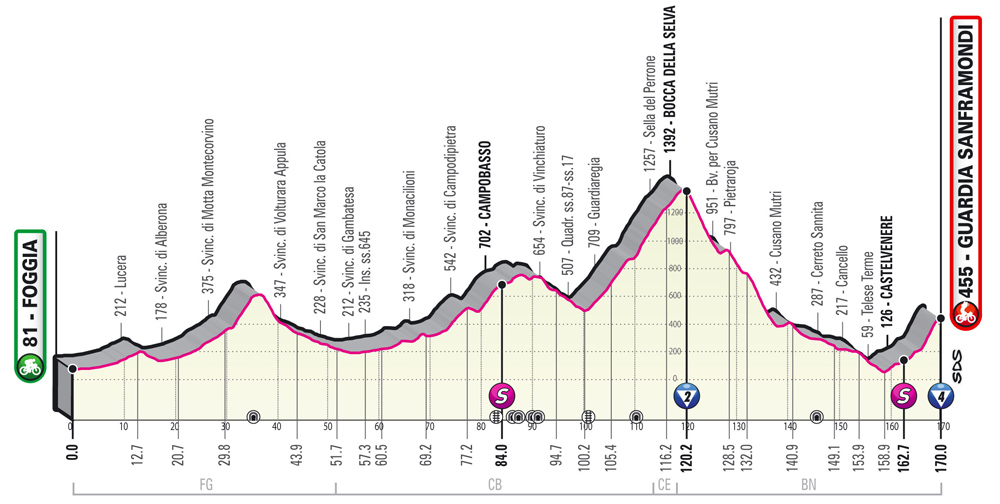 Giro stage 8 route: This stage across the Apennines features one single lengthy climb, and a steep, challenging kick just before the finish. At first, the route runs along fast and mainly straight roads all the way to Campobasso. The riders then reach the Matese Mountains to negotiate the Bocca della Selva climb (over 20 km), followed by a lengthy descent that ends 10 km before the finish. The route then rises all the way to the finish, with a sharp kick before homing in. The closing climb is approx. 3km long. The gradient hovers around 10% for the first 2km, with sharper peaks. The pitch returns to milder gradients in Guardia Sanframondi, and then kicks up again with 400m to go, after a left-hander. The home straight is on tarmac road and on a slight incline. 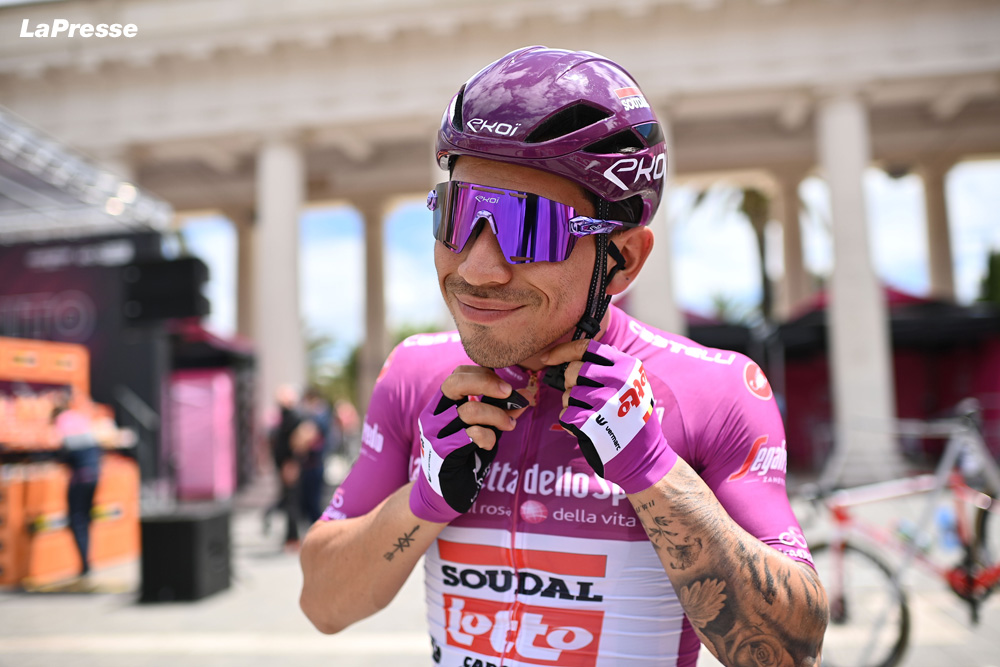 On the eighth stage of the 2021 Giro d’Italia, the ‘break riders’ were given their opportunity. The climbs on the race route were not considered tough enough to cause a time differences between the GC riders. Although it could have turned out differently in the first hour of racing. 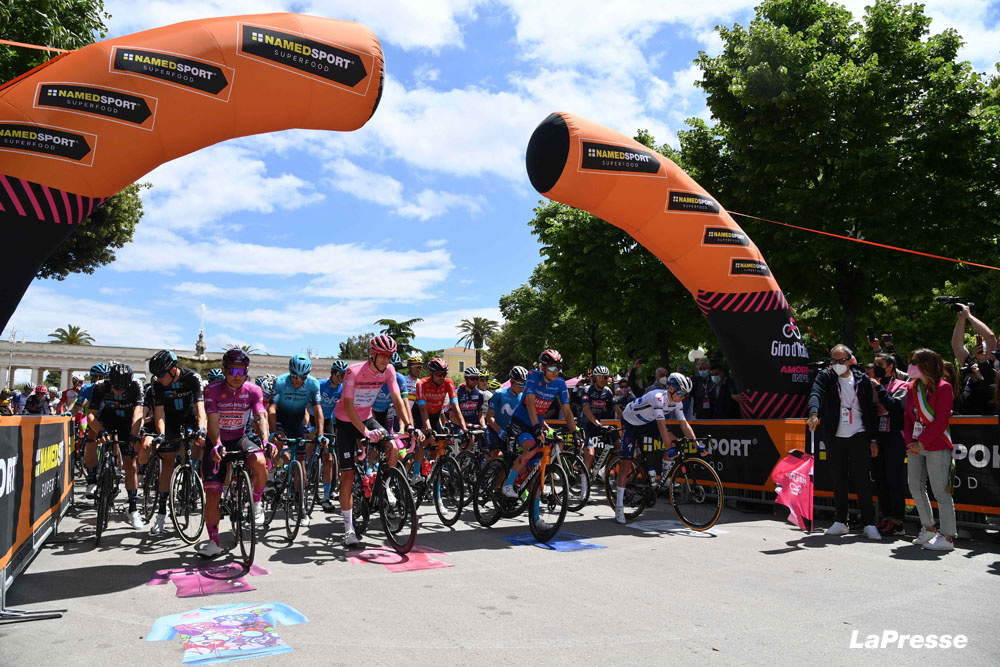 A tough day ahead with one big climb (and three smaller ones), but also cross winds 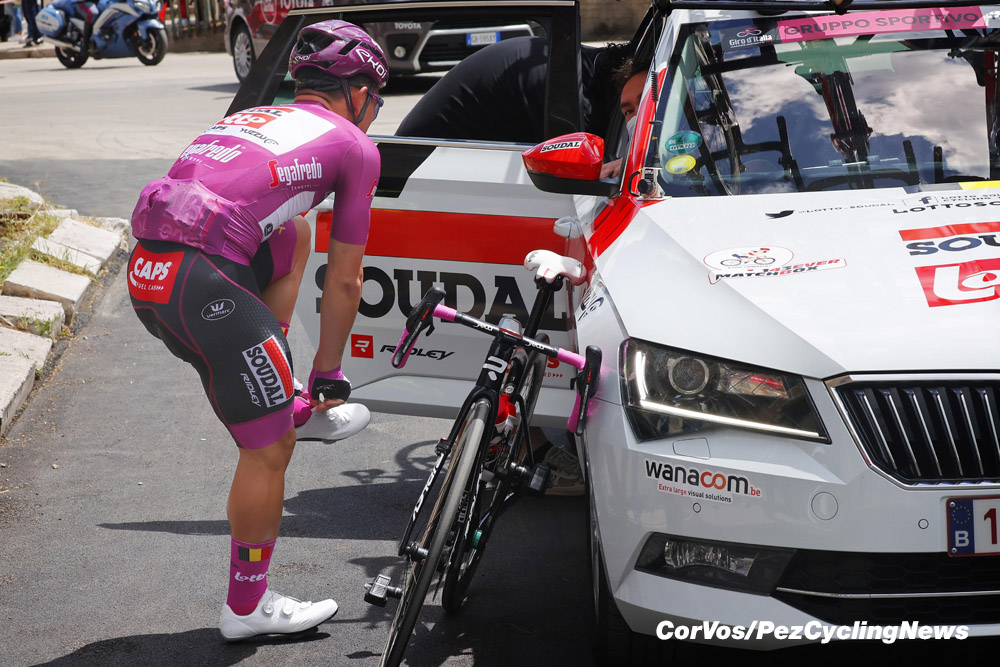 The strong cross-wind created echelons. Attila Valter and Deceuninck – Quick-Step were in the wrong group for a short time, but in the end they were able to quickly get the race back together. Due to the action, the ‘break of the day’ took time to form.

The wind caused echelons early in the stage

There were many attempts. Gianluca Brambilla, Gino Mäder and Samuele Battistella all tried it once, but without success. Only after 60 kilometres did nine riders escape the grip of the peloton: Giovanni Carboni, Victor Lafay, Francesco Gavazzi, Kobe Goossens, Nelson Oliveira, Nikias Arndt, Alexis Gougeard, Fernando Gaviria and Victor Campenaerts. 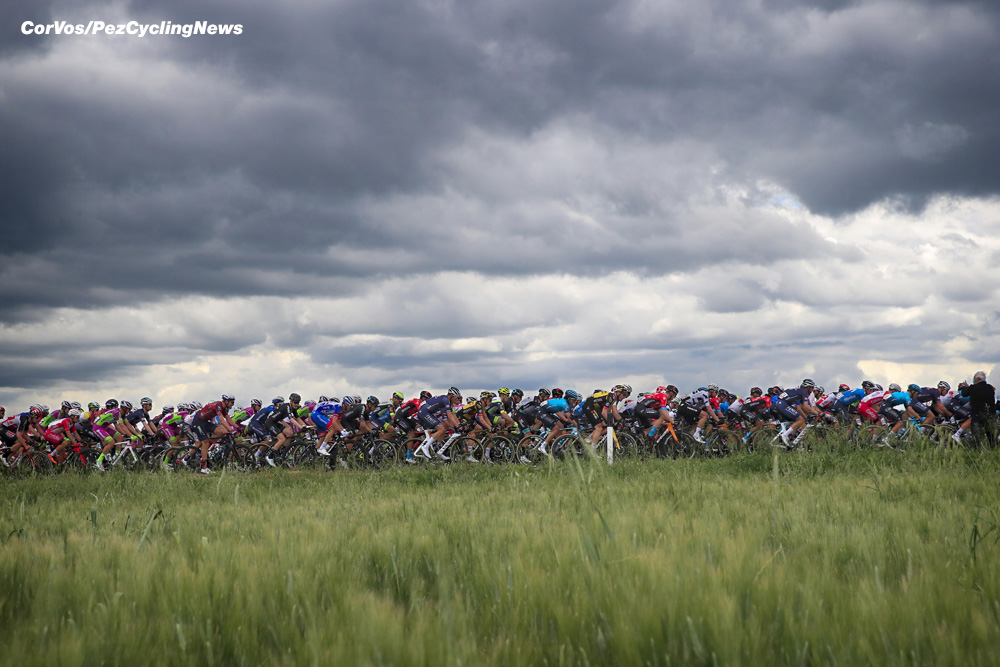 The rain held off, but the day was far from hot

Meanwhile, Caleb Ewan abandoned. The Australian was dropped from the peloton and decided not to continue. It would later turn out that Lotto Soudal’s sprinter was struggling with knee pain. 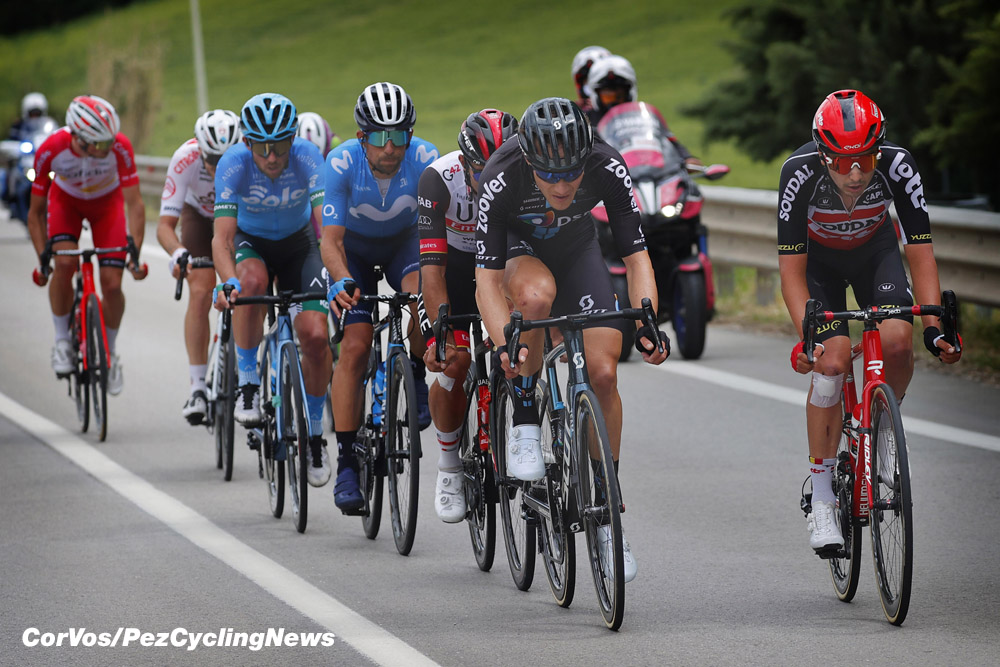 The outlook for the break started to look better further down the road. Even when Groupama-FDJ put itself at the head of the peloton, the lead of the eight at the front continued to grow. With 70 kilometres to go they had 7 minutes. 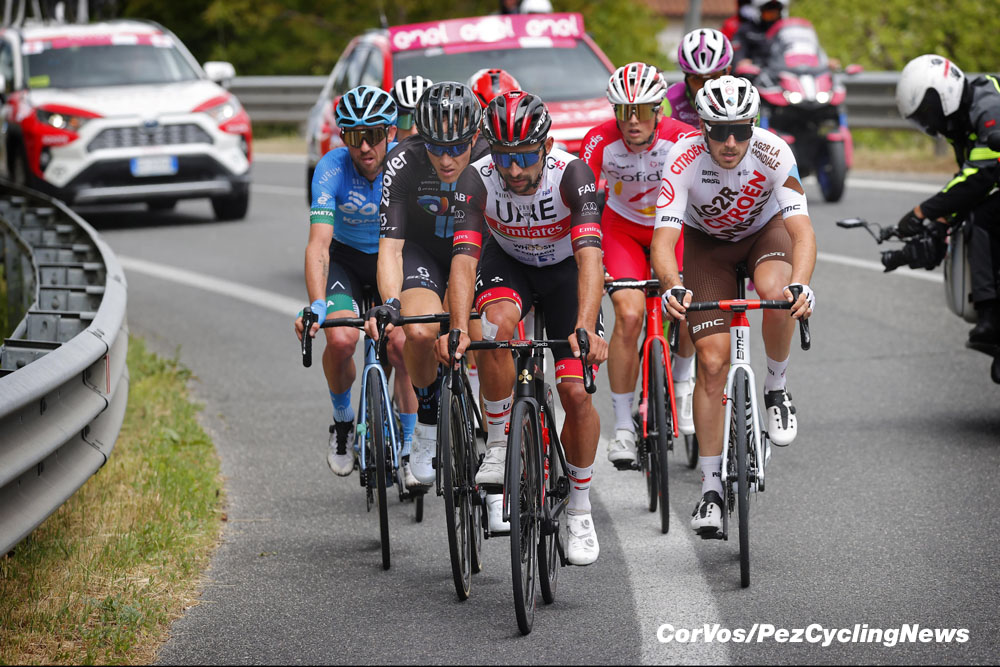 Would they go all the way?

The break started the toughest climb of the day, the Bocca della Selva (19.4 kilometres at 5%). Surprisingly, the sprinters, who were present in the leading group, were not dropped. It became clear that the riders at the front would start the final climb together. 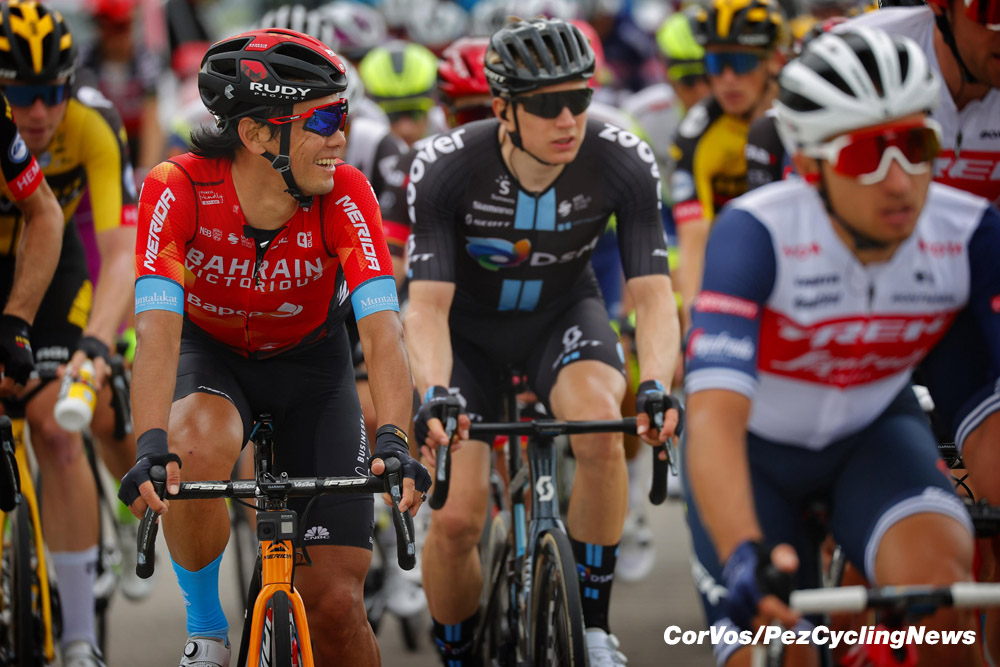 Anticipating the final climb, the lesser climbers had to try to reach the foot of the Guardia Sanframondi with a lead over climbers like Goossens and Lafay. First Oliveira rode away on the descent, but the others didn’t just let the Portuguese rider go. A little later, Arndt and Campenaerts tried the same trick. 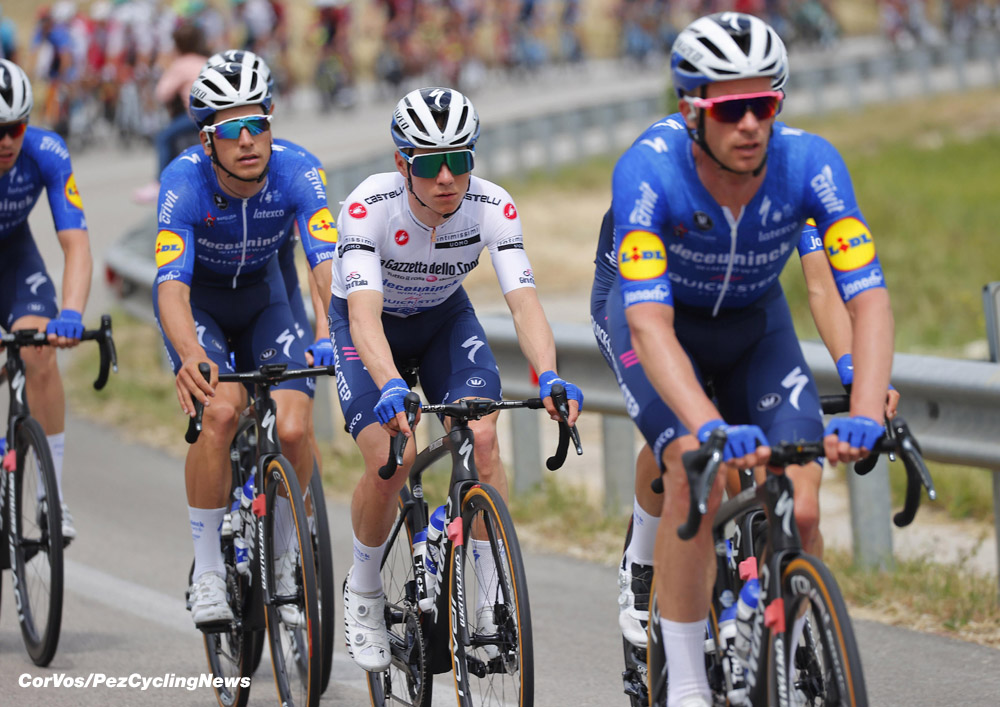 Second overall, Remco Evenepoel might be looking for 11+ seconds

Gaviria wasn’t too happy with the attacks as the Colombian had crashed on the descent of the Bocca della Selva and had a hard chase to catch the leaders. At 10 kilometres from the finish, Goossens, one of the better climbers in the leading group, made a serious attack. The Belgian had fellow countryman, Campenaerts, for company, but as with all previous attacks, the young Belgian’s attempt also failed. 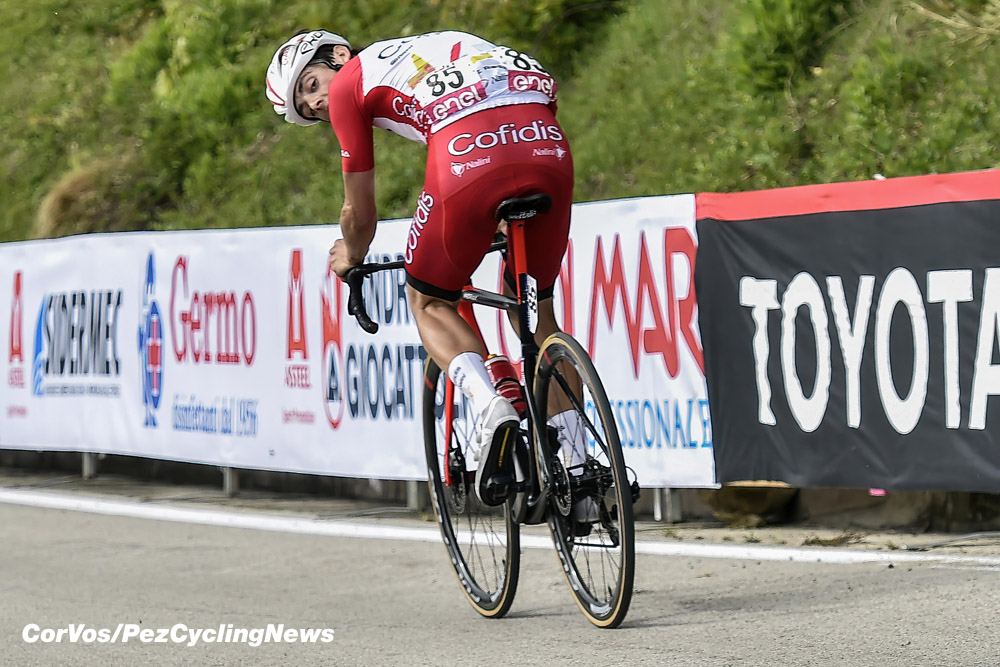 Campenaerts eagerness to get away from the leading group was eventually rewarded. The Qhubeka Assos rider jumped after Goossens’ attack, this time with Carboni. Behind him the only response was from Gougeard, but he was unable to close the gap. They started the final climb with a 12 second lead. Within a short distance, Lafay wiped out that lead. The Frenchman first swept up the Belgian and then the Italian. In the final kilometre, the 25-year-old was comfortably ahead of Gavazzi and Arndt for victory. João Almeida (Deceuninck – Quick-Step) brought in the favourites group 4:48 later. 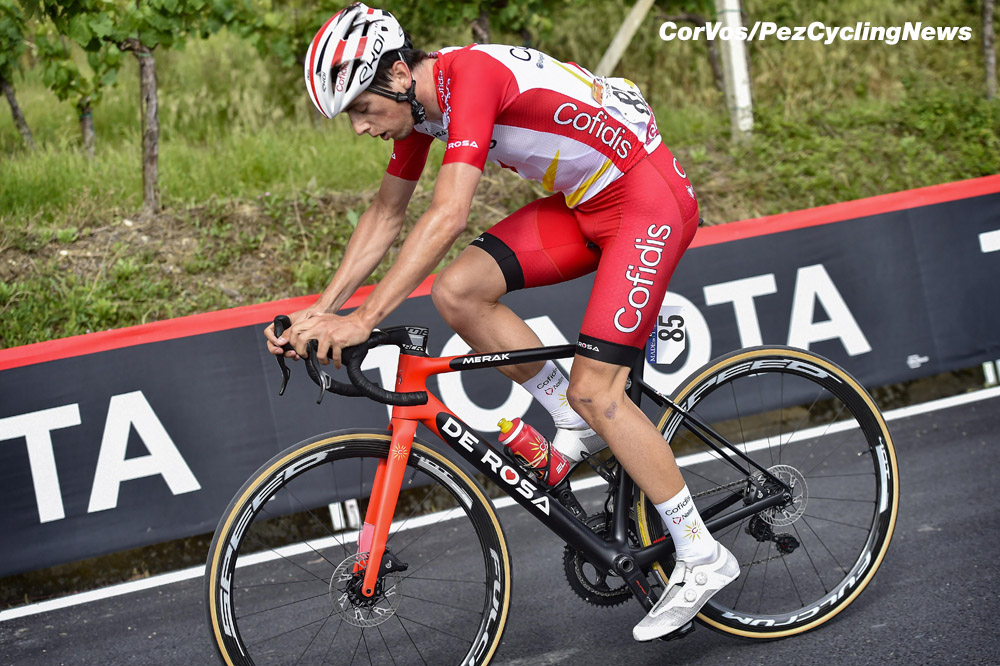 No panic in the finalé for Lafay

Stage winner, Victor Lafay (Cofidis): “I spent a lot of energy already in the first part of the stage to get into the breakaway. There were several attempts but the peloton didn’t leave much space. Then finally the breakaway went clear. Once the gap started to increase I was able to recover some energy. In the finale of the stage, there were several attacks. I attacked in the last few kilometres and saw that no one was following me. I cannot believe it, I have just won a stage at the Giro!” 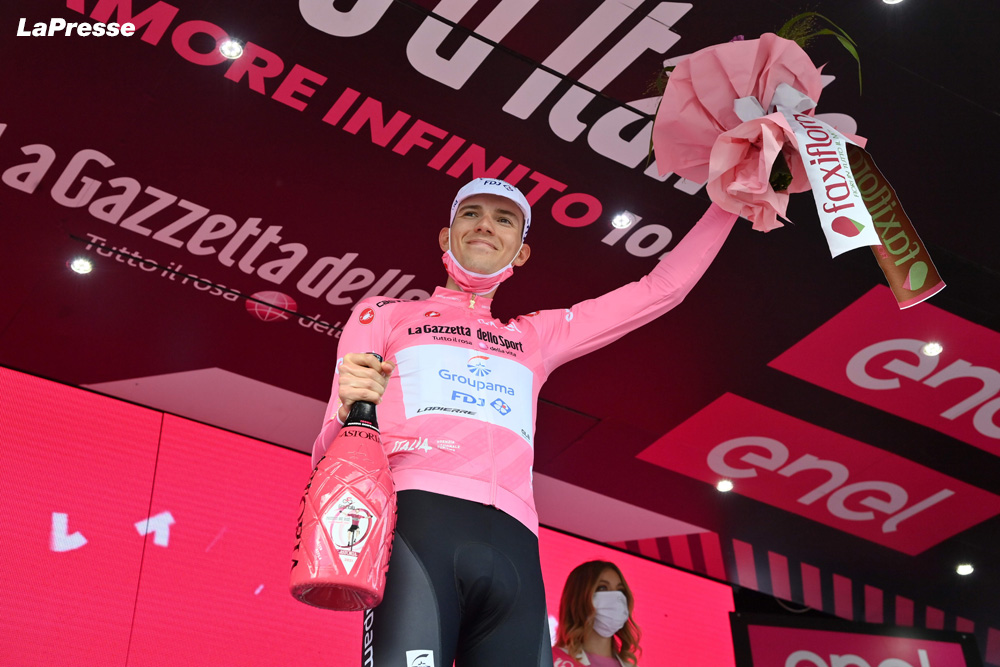 Maglia Rosa, Attila Valter (Groupama-FDJ): “It was a perfect day for me and for the team. Once the break went clear, we tried not to take any risks. It’s amazing to see all my teammates working for me and it’s fantastic to be able to wear the Maglia Rosa for another day.”