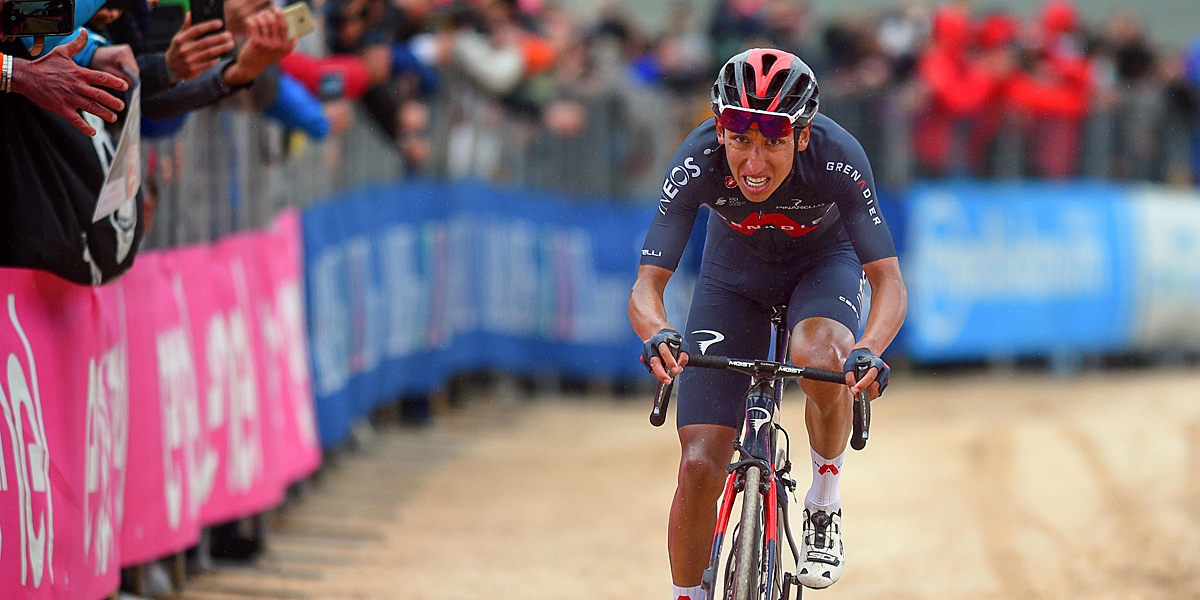 Giro d’Italia stage 9: At the end of a leg shattering stage 9, INEOS Grenadiers’ Egan Bernal shot from the peloton to pass the split break of the day to take the victory on the gravel of Campo Felice. The Colombian also took charge of the pink jersey with 15 seconds on Remco Evenepoel (Deceuninck – Quick-Step). 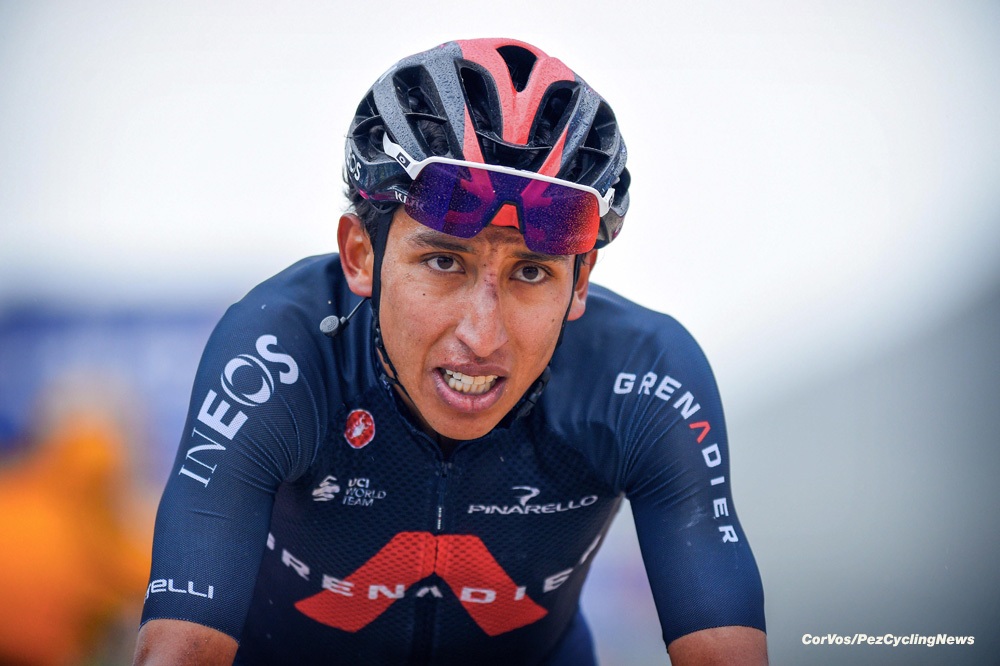 The ninth stage in the Giro d’Italia was won by Egan Bernal. The INEOS Grenadiers leader was the first to finish on the gravel of Campo Felice after an entertaining mountain stage of 158 kilometres. With a sharp attack he managed to take in the last of the early escapees and ride all the others off his wheel for stage and overall. 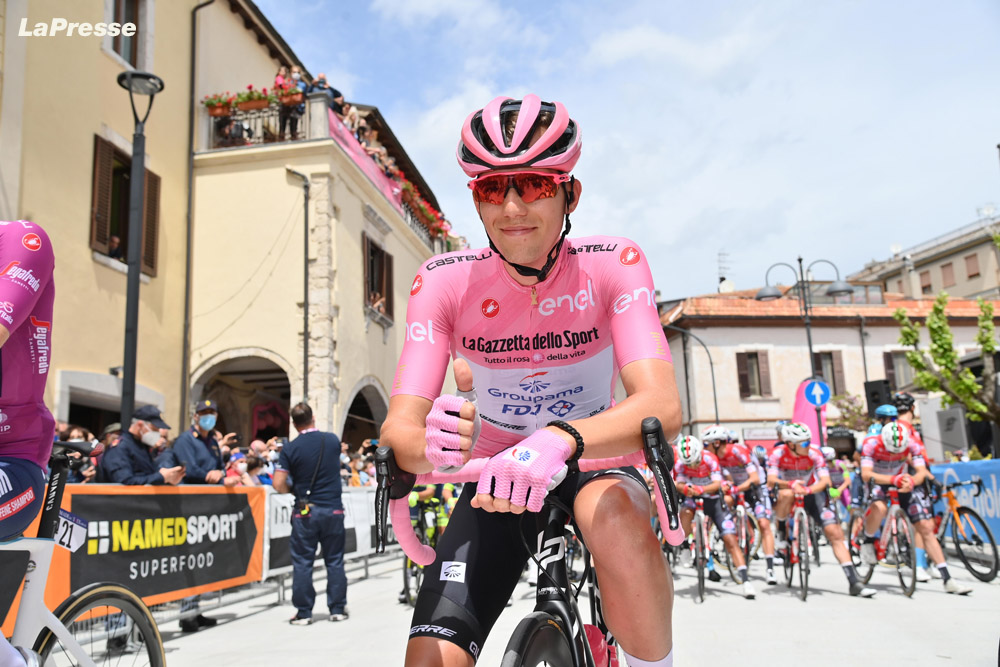 Giro stage 9 route: This queen stage across the Apennines of Abruzzo takes in several ascents, including 4 categorised climbs. From the start until Celano, the route takes in a succession of long climbs on moderately wide roads, followed by sometimes technical descents. Past Ovindoli (categorised climb), the route enters the Piana delle Rocche and becomes somewhat easier, up to Rocca di Cambio. Here, the course makes for Campo Felice, taking in the closing climb. The final climb is nearly 6km long, and the gradients are not very sharp. After a long, well-lit tunnel stretching from 3 to 2km remaining to the finish, the final 1,600 metres, as well as the home straight, are on unpaved roads, with peaks topping out at 14% over the last 500m. 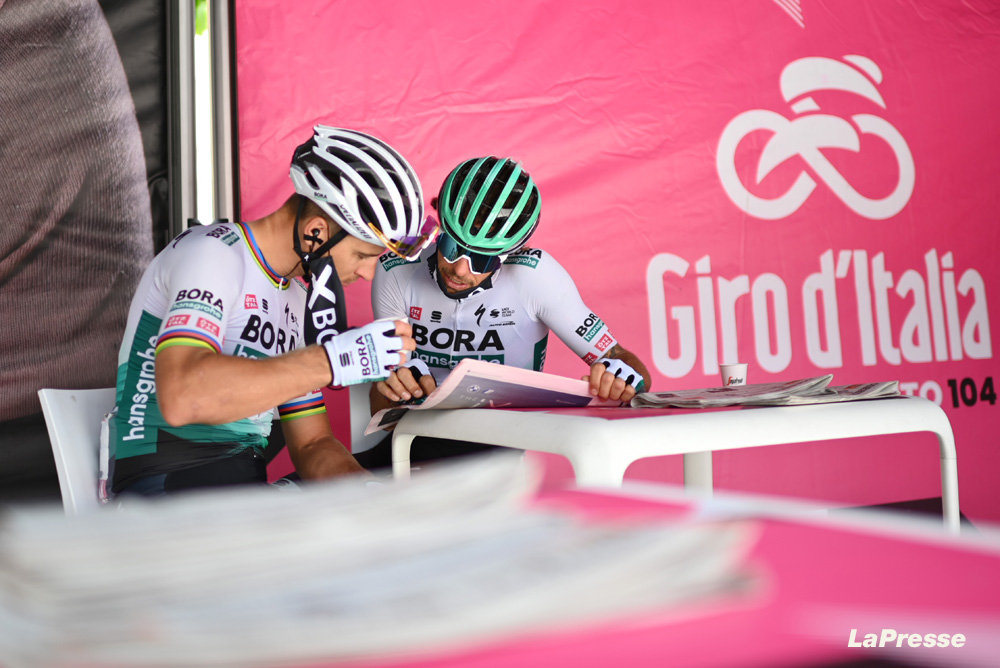 The opening hour flew by as there was a battle on the first two climbs, only the Passo Godi (15km at 3.8%) was worth any KOM points. Mountain jersey Gino Mäder, Bauke Mollema, Ruben Guerreiro, Quinten Hermans and Koen Bouwman, went on the attack. They escaped just before the top of the Godi, but the big teams didn’t want let that happen. A group with Daniel Felipe Mártinez, Damiano Caruso, Diego Ulissi and Luis Léon Sánchez made the jump to the leading group of 22 men. 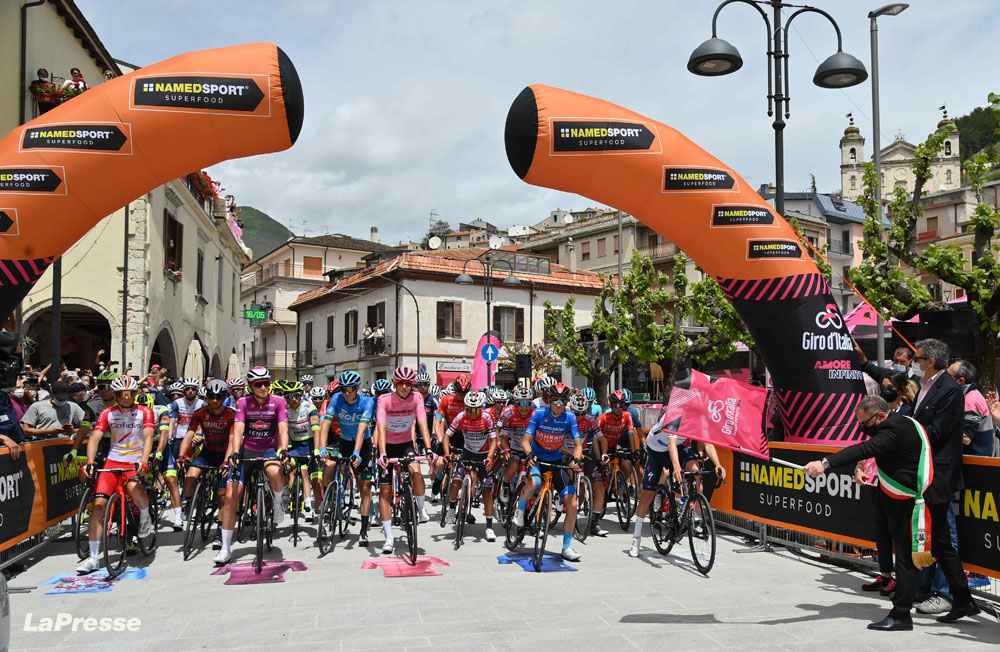 There was a nasty crash in the leading group on the descent of the Passo Godi, Matej Mohoric went over the handlebars, landing on his head and had to be taken away in an an ambulance. The rest of the leaders avoided the crash, but were at 40 seconds. Due to the chase work by UAE Team Emirates, almost everything came back together. Towards the foot of the next climb, there was again plenty of attacks, but those attempts were also reeled back. A subsequent attempt with sixteen men got a gap at 85 kilometres from the finish. 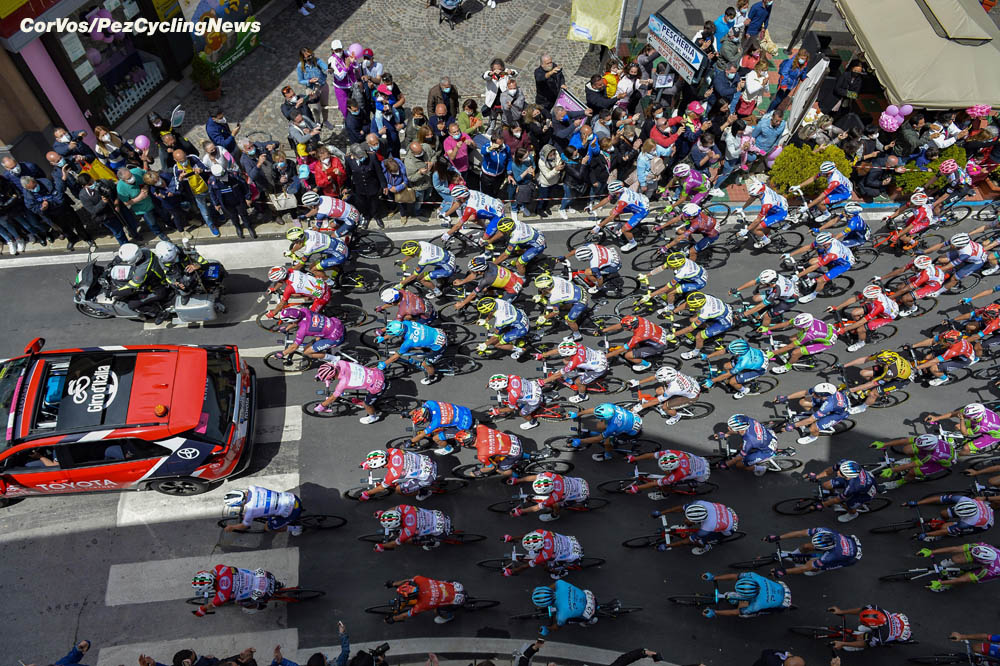 A short but hard stage ahead 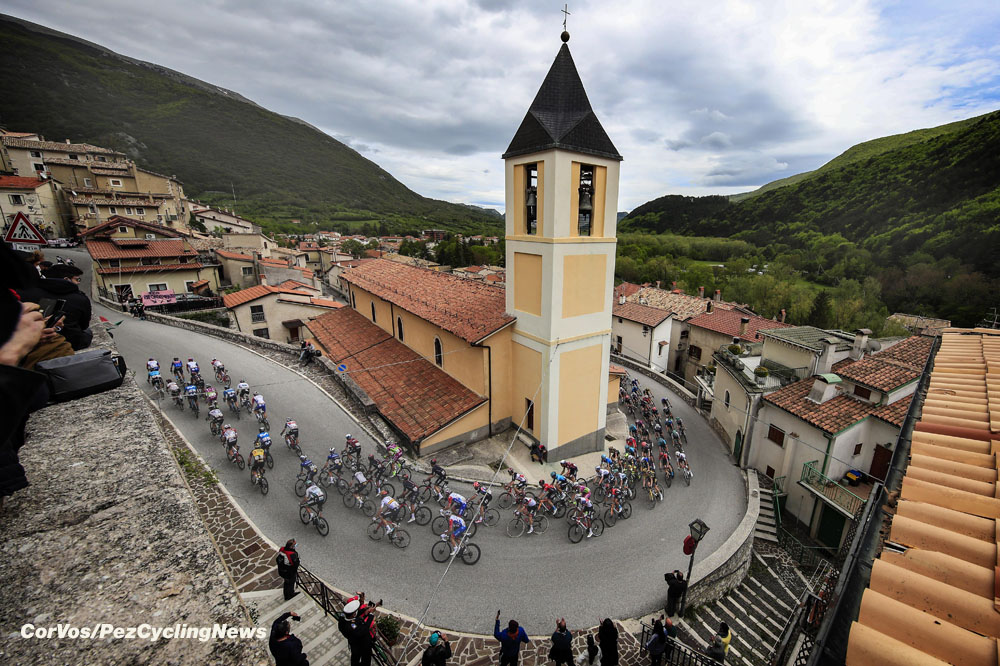 No time to enjoy the village

Groupama-FDJ controlled the peloton behind for the pink jersey Attila Valter. They let the front group take more than 3 minutes. At the top of the Forca Caruso, it was Bouchard who took the mountain points from Mollema. The leading group held onto the lead and knew what was still to come: the Ovindoli (12.4km at 5.1%), Rocca di Cambio and the final climb to Campo Felice (6km at 6%). 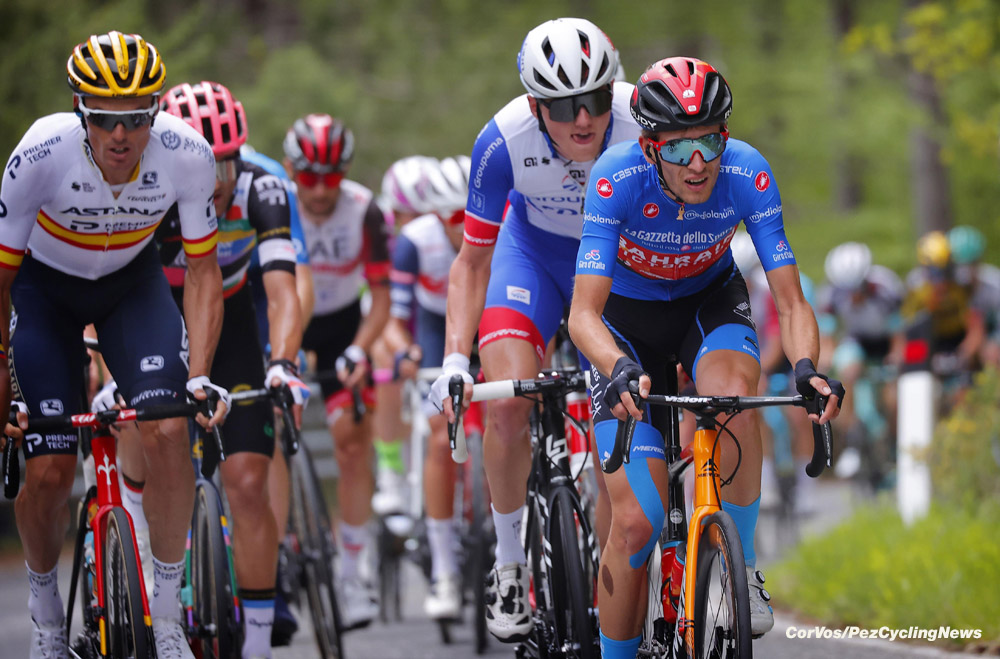 The battle was on from the start

On the Ovindoli climb, George Bennett attacked from the leading group, but the New Zealand champion could not get away. Then it was Carr and Bouchard who hit the front. The Frenchman took the mountain points on the second category climb and took the virtual mountain’s jersey. A group with Mollema, Bouwman and Storer then went on the counterattack. 10 kilometres from the finish they were 10 seconds from the leading duo. Meanwhile, INEOS Grenadiers and Bahrain Victorious had taken the lead from Groupama-FDJ in the peloton, but they were at 2:30. It looked like the stage win would go to a rider in the break. 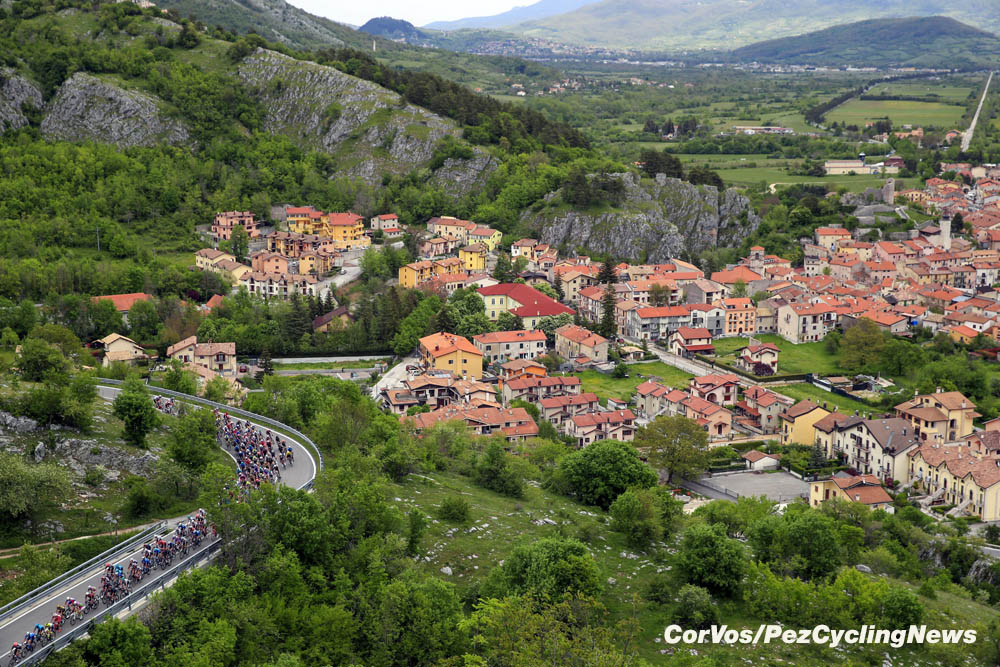 The peloton wasn’t keen on the break taking much time

On the Rocca di Cambio, Bouchard dropped Carr. The aggressive Frenchman went solo and kept Mollema, Bouwman and co. at 20 seconds. In the last 5 kilometres he was on his last legs, but still holding them off. Bouwman had shaken off his fellow escapees and Bouchard’s lead started to decline. 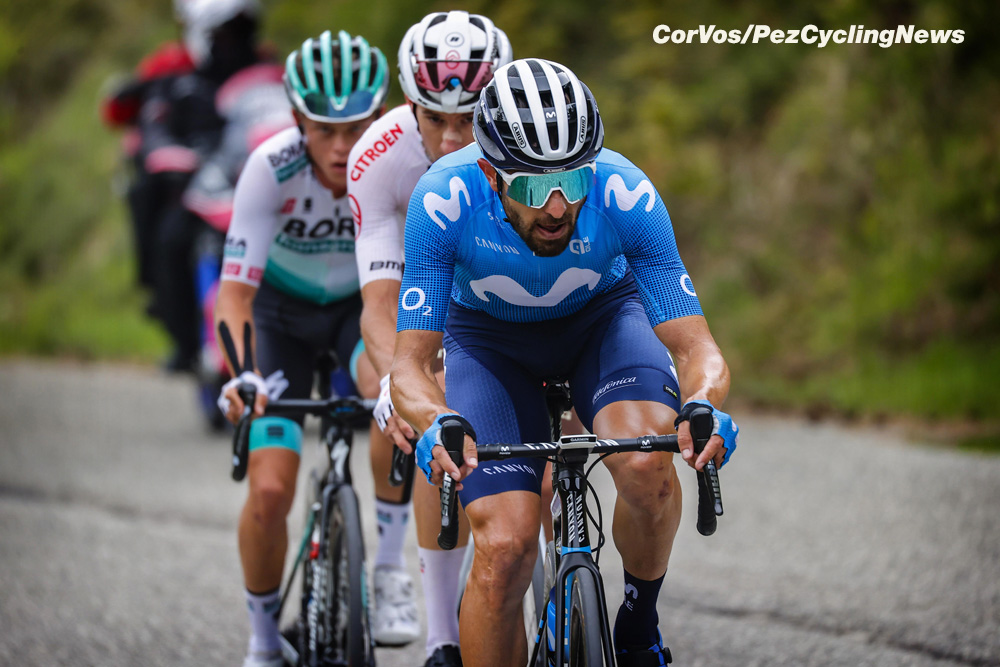 Dario Cataldo said he wanted to get in the break

The chase group of favourites were getting closer. The group was led by INEOS Grenadiers into the last 5 kilometres. Entering the tunnel, the difference was just under 1 minute. Bouwman had managed to close the gap considerably in the tunnel. Coming to the finish the difference was about 5 seconds between Bouchard and Bouwman. 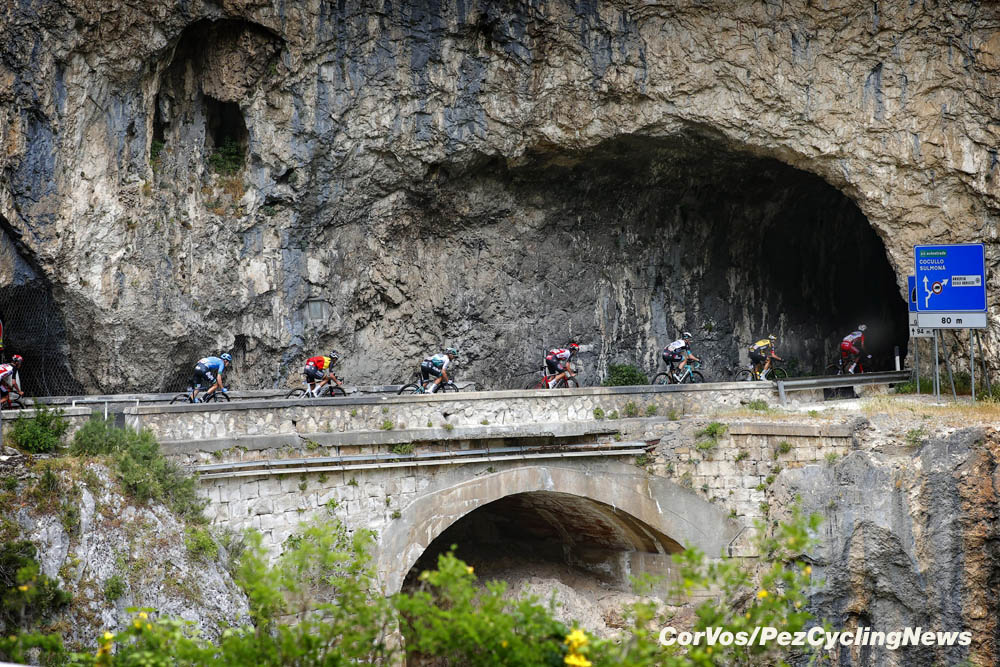 A break of 17 eventually managed to escape

After powering up the 1.6 kilometre gravel stretch at the top of Campo Felice, Bouwman managed to connect with Bouchard, while the GC men, led by Gianni Moscon, were at 15 seconds. What followed was a vicious attack from Egan Bernal. The Colombian shot past the escapees 400 metres from the finish and didn’t stop. 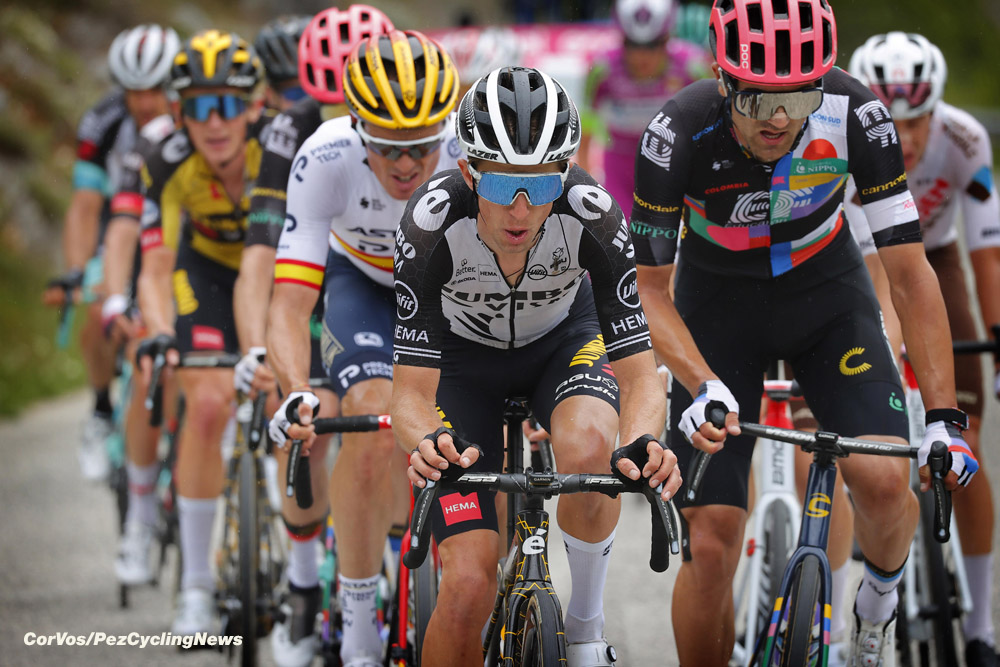 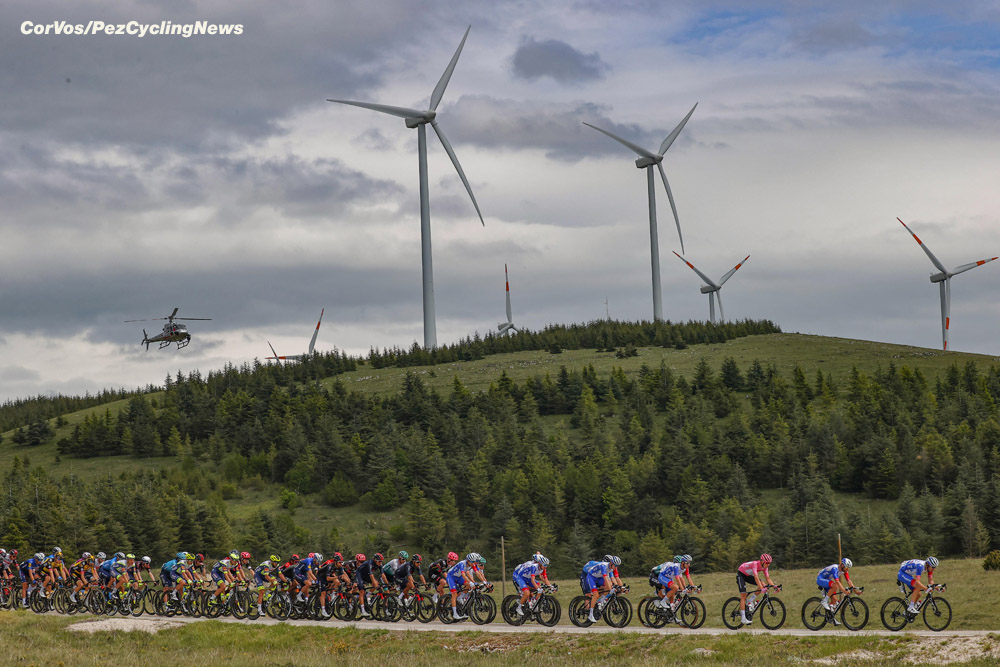 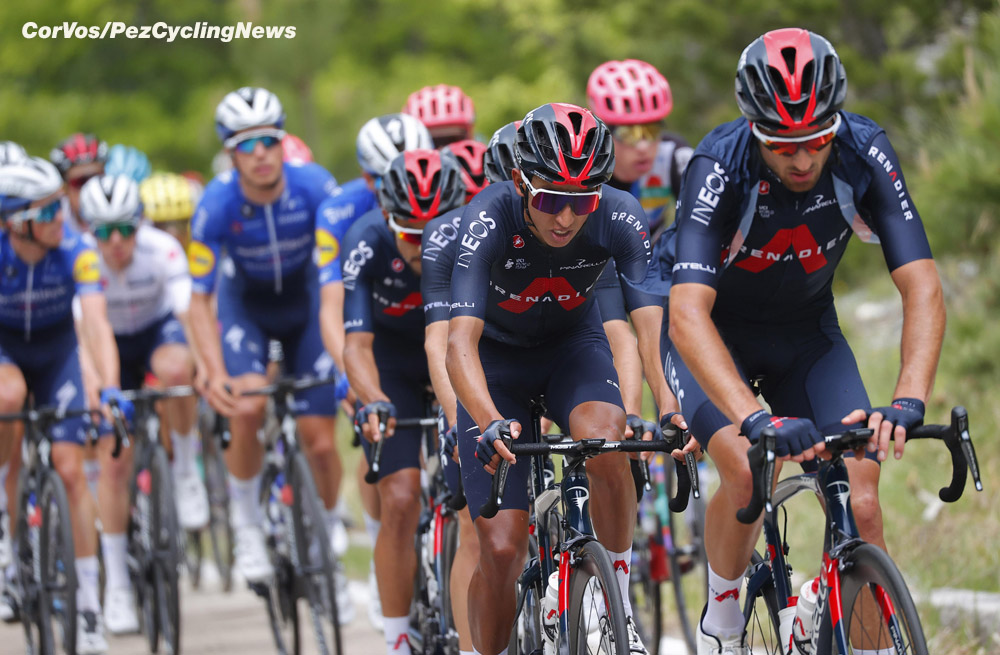 INEOS took over the chase work 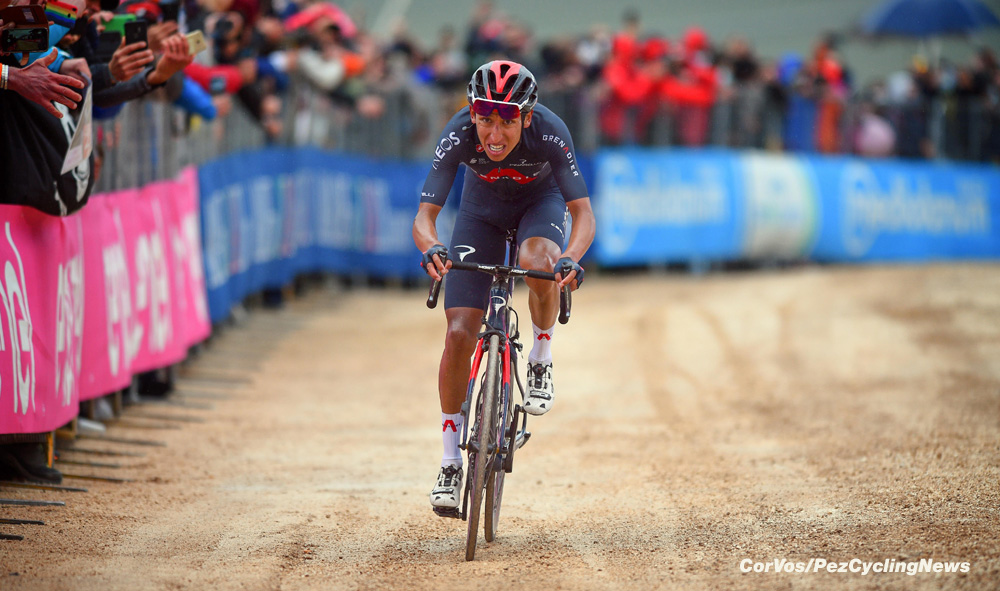 The gravel was no problem for the Colombian

Egan Bernal is the new wearer of the pink leader’s jersey in the Giro d’Italia. His lead over Evenepoel is 15 seconds. Vlasov follows at 21 seconds and Ciccone is fourth at 36 seconds. Monday there is no rest day, but a sprinter stage to Foligno. Tuesday is the first day of rest. 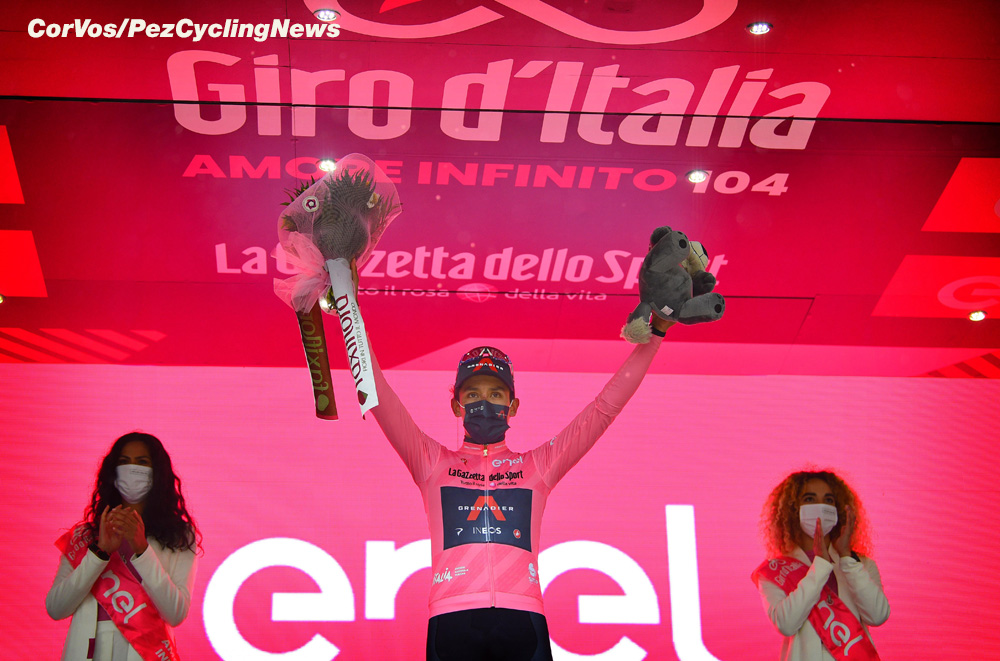 Egan Bernal in pink by 15 seconds

Stage winner and new Maglia Rosa, Egan Bernal (INEOS Grenadiers): “I cannot believe what just happened, I just won my first stage in a grand tour. I made a lot of sacrifices to get where I am now. I was thinking I would do well today but I was not sure whether I could have won the stage. My teammates had a lot of confidence in me, they told me I could do it: this victory is for them, they really believe in me.”