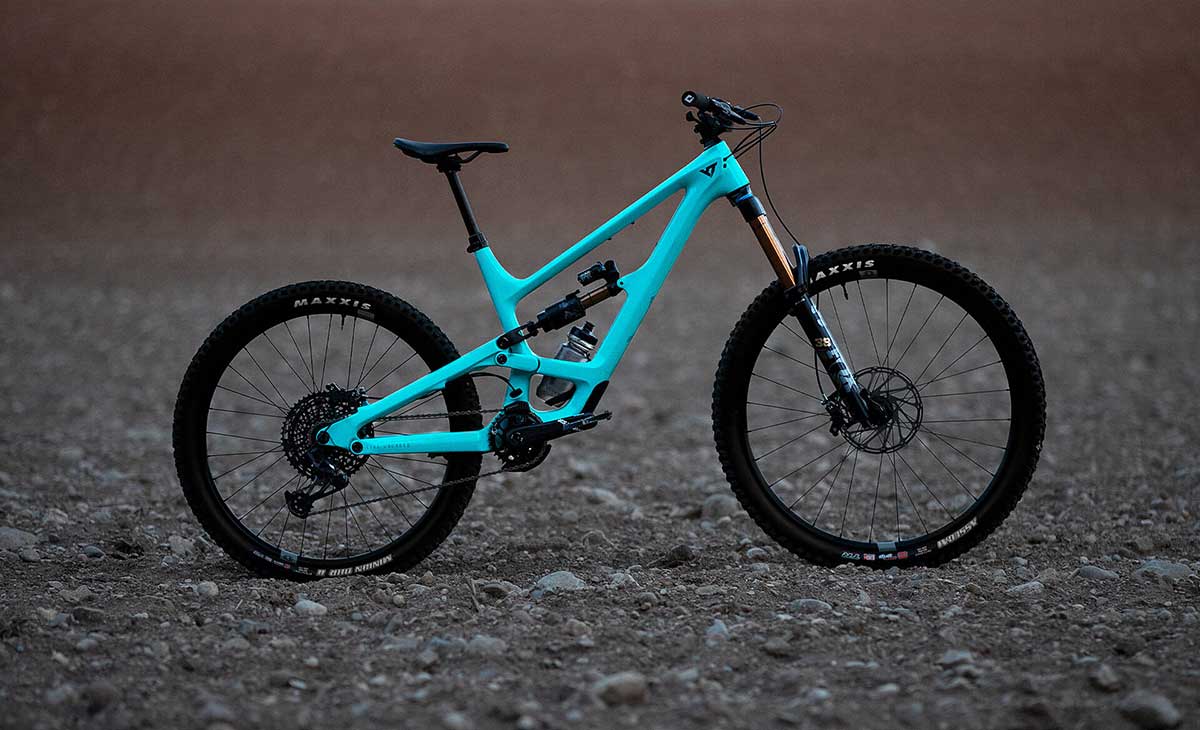 Today sees YT Industries launch not one but two new enduro mountain bikes. The 2021 YT Capra, now the MK3, has arrived in two configurations; a 29er and a mixed-wheel size MX edition. The former is said to be the fastest enduro bike YT have ever made. Gone is the 27.5″ option, replaced by the YT Capra MX which gets its very own carbon frame and suspension kinematic, distinct from that of the 29er.

The launch edition with its distressed pink colorway, top-end spec and decals reminiscent of Return of The Goat II, is limited to just 100 bikes. Here’s everything you need to know.

YT Industries have updated their long-standing long-travel enduro bike, the Capra. Now in its third iteration, the Carbon Capra gets an entirely new frameset with a more aggressive downhill-focused, but still adjustable, set of geometry figures. In fact, there’s not much about the Capra that hasn’t changed this year; let’s dive in with a top-level facts first.

The die hard YT fans can relax; it still looks like a Capra. The new frame is composed of a high modulus carbon fibre lay up, utilizing lighter and more expensive fibres than we’ve seen on previous models. As a result, frame weight is reduced. Perhaps more importantly, the weight distribution has altered. Note the increased girth of the downtube and chainstays relative to the top tube and seat stays; the bulk of the weight now sits lower.

Low and behold, the 2021 Capra is lower, longer and slacker than the MK2 that came before it. Picking out the Large frame as an example, reach has increased by 7mm to a very healthy 467mm while the BB drops to 349mm in its lowest configuration.

As before, the chainstay length does change in accordance with frame size. Like a growing number of mountain bike mfgs, YT recognize the merits of proportional length chainstays, but freely admit it is not cost effective to take this approach for all five frame sizes. As such, the S, M and L frames get a 438mm stays while this increases to 443mm for the XL and XXL sizes.

As alluded to earlier, geometry of the 2021 YT Capra is adjustable through the flipping of a flip-chip located at the rear shock mount. Featuring a more aggressive geometry than the MK2 frame, the new Capra sports a head angle of 64.5° and a (3°!) steeper effective seat tube angle of 77.9°. The geo adjust is subtle; switching the orientation of the flip-chip, and thus the position at which the rear shock mount sits, slackens the HA and SA to 64.2° and 77.6°, respectively. These changes are as a result of the BB dropping by 5mm.

With the addition of a Small frame for 2021, more riders than ever have the opportunity to appreciate the advantages of YT’s take on a long-travel 29er enduro bike.

The 2021 YT Capra actually has slightly less rear wheel travel than its predecessor at 165mm. How that travel is delivered has changed quite considerably, however. With a little encouragement, YT agreed to share with us detail of the suspension kinematic of the new Capra, information they have been hesitant to release in the past.

While the two frames share an almost identical rear axle path, the leverage curve of the 2021 Capra sees reduced end stroke progression as compared to the 2020 model. In line with this change, YT say they have also improved the pedaling kinematics with changes to both the anti-squat and anti-rise characteristics of the frame.

While the 29er and MX versions are both able to accommodate a coil shock, YT say the leverage curve of the MX frame is better suited to the linear spring.

Though the YT Capra started out its life on the trails as a 27.5″ bike, the industry and the demands of its customers have moved onto bigger (and better?) things. The 27.5″ drops out of the line-up for 2021, replaced by a sweet-looking MX version, or mullet… call it what you want.

The Capra MX runs an entirely different frameset to the 29er. It’s not just the geometry that’s different; the carbon fibre layup is deferentially tailored to its more downhill-oriented intentions. As such, its a bit weightier with the Core 3 model in size small weighing a claimed 15.3kg.

The Capra MX has a higher start and end leverage ratio to the 2020 27.5″ bike it replaces. Of more significant note here is the fact that the MX version sees significantly increased end stroke progression over the new 29er, making it a more favorable candidate for the linear spring of a coil shock.

As you might imagine, the Capra MX is a bit slacker than its 29″ counterpart with a head angle of 64.3°. That drops to 64° when you change the orientation of the flip-chip. It also concomitantly drops the BB height by 5mm to 346mm and slacken the effective seat angle to a still very healthy 77.5°.

The Launch Edition of the 2021 YT Capra is available in the MX configuration only. Thus is the top-of-the-range model with a parts list pushing the retail price up to $7,999 USD. YT are only releasing 100 models of the Launch Edition, so you’ll have to move fast to get your hands on one.

So, what’s on it? That cash gets you a RockShox ZEB Ultimate fork a Cane Creel DB Kitsuma Coil Shock with a Vault Progressive spring and the Cane Creek eeWing crankset.

The small (but important) details

From fully guided internal cable routing, to space for a water bottle inside the front triangle on every frame size, it seems no detail has been overlooked on the redesigned Capra. New for 2021 is an additional pair of bosses on the underside of the top tube for accessory mounting. The new Capra also runs a SRAM Universal Derailleur Hanger for simplicity.

The driveside chain and seat stays get protection from chain slap to keep the bike quiet and protect the paintwork. The downtube also gets some protection. All frames get the same ZS44 ZS56 headset and press fit bottom brackets.

The 2021 YT Capra is available in three models, one of which is the limited edition launch bike, pricing and specs for which you’ll find above.

The Core 4 gets a FOX Factory level for and rear shock, Crankbrothers Synthesis Alloy wheelset with upgraded Industry Nine 1/1 hubset, SRAM Code RSC brakes, XO1 Eagle 12 speed drivetrain and Renthal cockpit. This one, in 29 and MX, will set you back $5,999 USD.

YT have introduced a new way to pre-order bikes as part of the 2021 Capra launch. Customers who wish to pre-order a bike with an availability lead time longer than 8 weeks will be asked to pay a 10% fully-refundable deposit to reserve their bike, with the balance being charged four weeks before the bike ships.

That deposit ensures a place in line and orders can be cancelled at any time with a full refund. YT expect to start shipping the first Capra bike in late 2021 with production volumes ramping up significantly in early 2022. Customers will be able to see their projected shipment date when placing their order.

Thule adds 2 new categories to get your best riding buddies to the trailhead & around town
Return of the Mongoose Hooligan – A 90s Classic BMX returns as a 29er
Transgender athletes: What do the scientists say?
Review: Ride Concepts Tallac Clip mountain bike shoe rocks in Nepal
Can Heat Training Slow You Down?