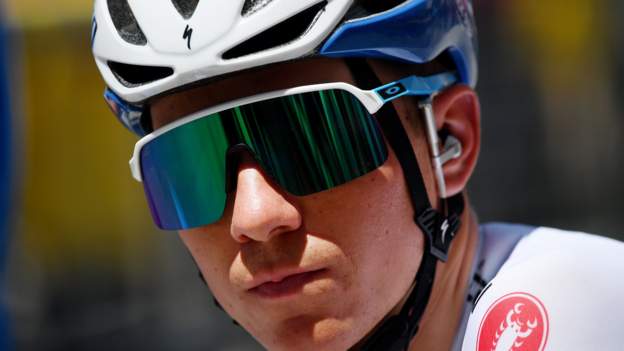 Remco Evenepoel says his mother had to help him stand during his recovery from the broken pelvis he suffered in a crash last year.

Evenpoel is a surprising second in the Giro d’Italia on his return to racing after nine months.

“Two or three doctors had to hold me up because I would fall down again, feeling nothing,” he told BBC Sport.

“The first time they tried to make me stand – I lost 3 litres of blood [in the crash] – I had to stand up and could feel all the pain in my back and all the blood came down, because for five days I was not even moving any millimetre,” Evenepoel added.

The Belgian, who is one of cycling’s most exciting talents, is just 14 seconds down overall in his first Grand Tour, from Egan Bernal of Ineos Grenadiers, who wears the pink jersey.

He added that one of the hardest moments of his recovery from the accident in August last year was being unable to stand in front of his mother: “I also had this at home with my mother.

“We were alone together – I wanted to stand up to have a small walk, but I stood up and said she had to stay with me because I can’t see anything anymore, or feel anything anymore.

“It was like I could feel I was standing up, but I didn’t see anything in front of me and feel anything – those moments were hard.”

Team boss Patrick Lefevere added that he hoped the team could compete with the likes of Ineos to try to win a Grand Tour such as the Tour de France.

The team, known in the sport as the Wolfpack for their ability to use multiple riders to strategically out-race competitors, are one of the most successful one-day teams.