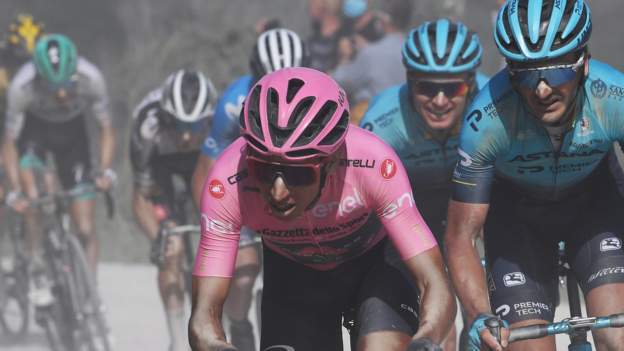 Colombia’s Egan Bernal took control of the overall standings in the Giro d’Italia by extending his lead in the race to 45 seconds.

Switzerland’s Mauro Schmid won a dramatic stage 11 from a breakaway as riders struggled with the intense gravel roads of Tuscany.

“I’m happy to arrive at the front but we need to stay focused,” said Bernal.

Yates, 28, who had questioned whether the 162km run from Perugia to the town of Montalcino had a place on a Grand Tour due to the high risk of mechanical issues and crashes, said he was pleased overall with his performance on Wednesday.

The Team Bike Exchange rider added: “Onwards and upwards. It wasn’t a day I was looking forward to but I think I did a good ride. The legs were good, and that’s the main thing.”

The 21-year-old, riding his maiden career Grand Tour and first race since fracturing his pelvis last year, ran into trouble on the third gravel section and looked nervous on the descents.

He then found himself in an angry discussion with Deceuninck-QuickStep team-mate Joao Almeida and ripped out his earpiece after the Portuguese left it late to drop back to help – leaving his bid for the pink jersey over.

Qhubeka-Assos’ Schmid held off Alessandro Covi of UAE Team Emirates in a two-man sprint to the line to take his first professional victory.

Stage 12 takes place on Thursday with the 212km route setting off from Siena and finishing in Bagno di Romagna.