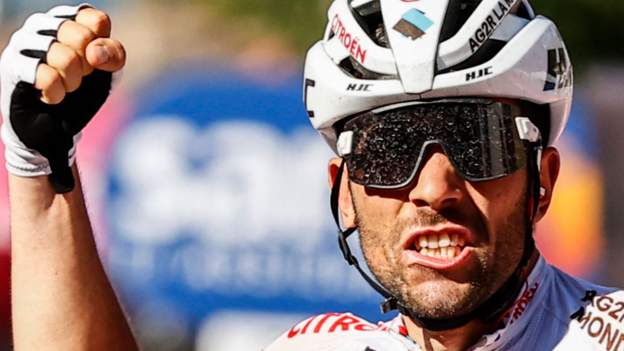 Movistar’s Marc Soler and De Marchi’s British team-mate Alex Dowsett were among those to also withdraw as the riders contended with tough conditions.

Israel Start-Up Nation’s De Marchi, who wore the pink jersey for two days, crashed 20km into the race and was taken away in an ambulance.

His team confirmed the rider had broken his right collarbone and six ribs, along with his first and second thoracic vertebra – and would remain in hospital for “at least one night”.

De Marchi had previously criticised the finish to stage five which saw Mikel Landa suffer a nasty crash as “a crazy circus” and “too dangerous”.

Soler, who had been 11th overall, fell shortly after the start of the stage in Siena and was forced to stop after 50km with a back issue.

Friday’s stage 13 is a flat 198km route from Ravenna to Verona, before the riders tackle one of cycling’s toughest ascents, Monte Zoncolan, on Saturday.