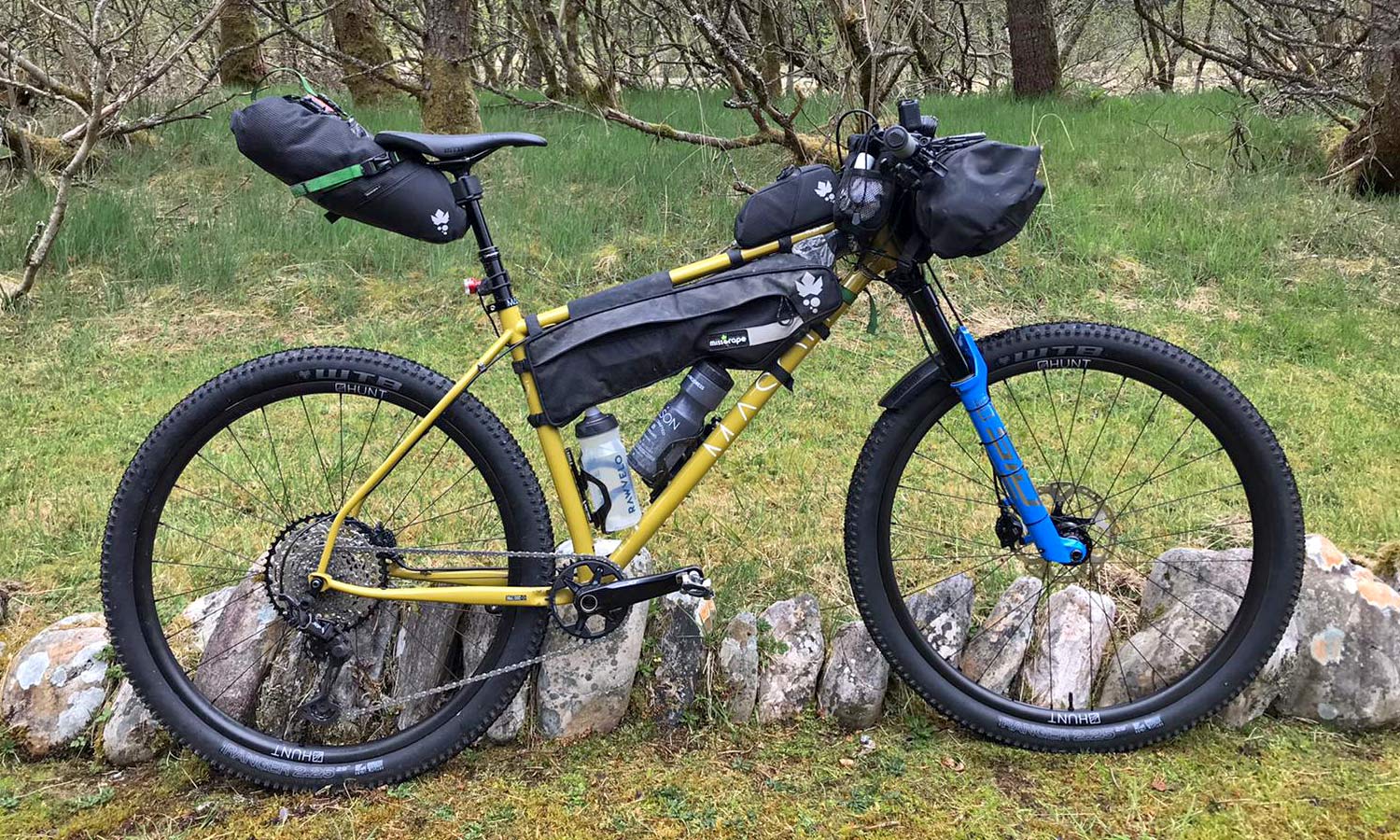 Mason apparently has a new steel hardtail adventure mountain bike in the works, as ultra-endurance racer Josh Ibbett has packed up a bright shiny yellow prototype with Miss Grape bikepacking bags to take on this weekend’s Highland Trail 550 up in Scotland, and given us an exclusive detailed sneak peek. Looking to take the ISO in search of more technical terrain, this upcoming RAW bike is expected to launch later this summer. Oh, and it seems to be sporting an as yet unreleased set of Hunt carbon mountain bike wheels with a Boost-spaced SON dynamo to light Josh’s way…

Josh is testing out the backcountry RAW on the tough, rocky Scottish adventure race, before the new hardtail is set to become Mason’s first true mountain bike later this year.

While much of Josh’s ultra-endurance racing exploits began on more road, then gravel bikes, he’s been venturing further off-road and pestering Dom of Mason Cycles for a couple of years to build this adventure-ready MTB hardtail around an XC suspension fork. Mountain bikes aren’t that big of a step for Mason’s #FastFar concept, building bikepacking & off-road tour capable frames for all terrain.

The steel RAW is most closely tied to the Mason ISO monster gravel bikepacking bike which debuted 2 1/2 years ago with MTB-sized tires, a rigid carbon fork with integrated mini rack, and drop bars. In fact, we also got a look at Josh’s ISO last winter, which he rode across the Tour Divide.

The RAW is set to be Mason’s first entirely UK-manufactured frames, built in small batches in a partnership with Fiveland Bikes.

Josh calls the geometry of his RAW prototype “progressive modern” with a 66° headtube and ‘roomy’ frame reach, meant to be a stable descender but still easy to keep pointed straight on the uphills too. His XL frame has around a 75° seat angle factoring in the curved seattube design, and 435mm chainstays.

Mason adds their signature small, curvy & tapered seatstay to the RAW for a mix of springy steel ride and plenty of tire clearance. Josh looks to be running 29×2.25″ WTB Rangers to go fast, but there’s claimed room in there for up to 2.6″ tires. Chainstays are also similarly tapered & curved to clear the Shimano XT 34T 1x drivetrain without any extra yoke required.

The frame features a classic threaded bottom bracket, Boost spacing, modular internal cable routing in the front triangle (including stealth dropper post compatibility), and adaptable external cable routing in the rear. Accessory mounting-wise, the RAW gets 4 bosses on the inside of the down tube and 3-pack of cage mounts on the underside, plus regular seattube bottle bosses, direct toptube bag mounts, and rear rack mounts.

Josh’s bike is painted up in bright Filter Yellow, which is set to be a production color, along with Sensor Blue and Vela(?). Pricing has not yet been set for the new RAW, but will likely be a bit more than other Masons, and more in line with other UK-made premium steel hardtails. It is expected to launch later this summer with both frameset & complete build options.

As for the prototype Hunt wheels, Josh referred to them as Hunt Carbon Dynamos. We’re used to seeing him run SON dynamo front hubs laced into Hunt alloy or carbon rims as his ideal method of keeping power to his favorite Exposure LED lighting setup for endurance racing.

Much like we saw Hunt launch the Search 29 Dynamo Disc mountain bikepacking wheels to go with Mason’s ISO, these will likely launch with the RAW.

What’s new here is a 22mm deep hookless tubeless carbon mountain bike rim, with a wide 26mm internal & 32mm external width. That’s a bit narrower than the alloy Search setup, but almost 400g lighter for the pair in the end.

The hub tech looks the same as the Search 29, with the 15mm thru-axle Boost-spaced SON dynamo hub up front, and Hunt’s Boost Trail Wide 6-pawl 5° engagement 6-bolt disc hub out back.

Both wheels in the Hunt Carbon Dynamo 29″ Boost setup use 28 spokes, and Josh says the pair with dynamo charging capability, weighs just 1789g.

While we don’t know official pricing or release date yet, we can make an educated guess that they’ll sell for about the same £1059 / 1459€ as their gravel analog, the Hunt 30 Carbon Dynamo Disc wheelset.

Josh also is running a non-load bearing “sneaky little front bag mount” prototype attached from the underside of the SID’s steerer tube to keep his fully-packed handlebar bag from swaying or touching the headtube/cables, which he called a work in progress…