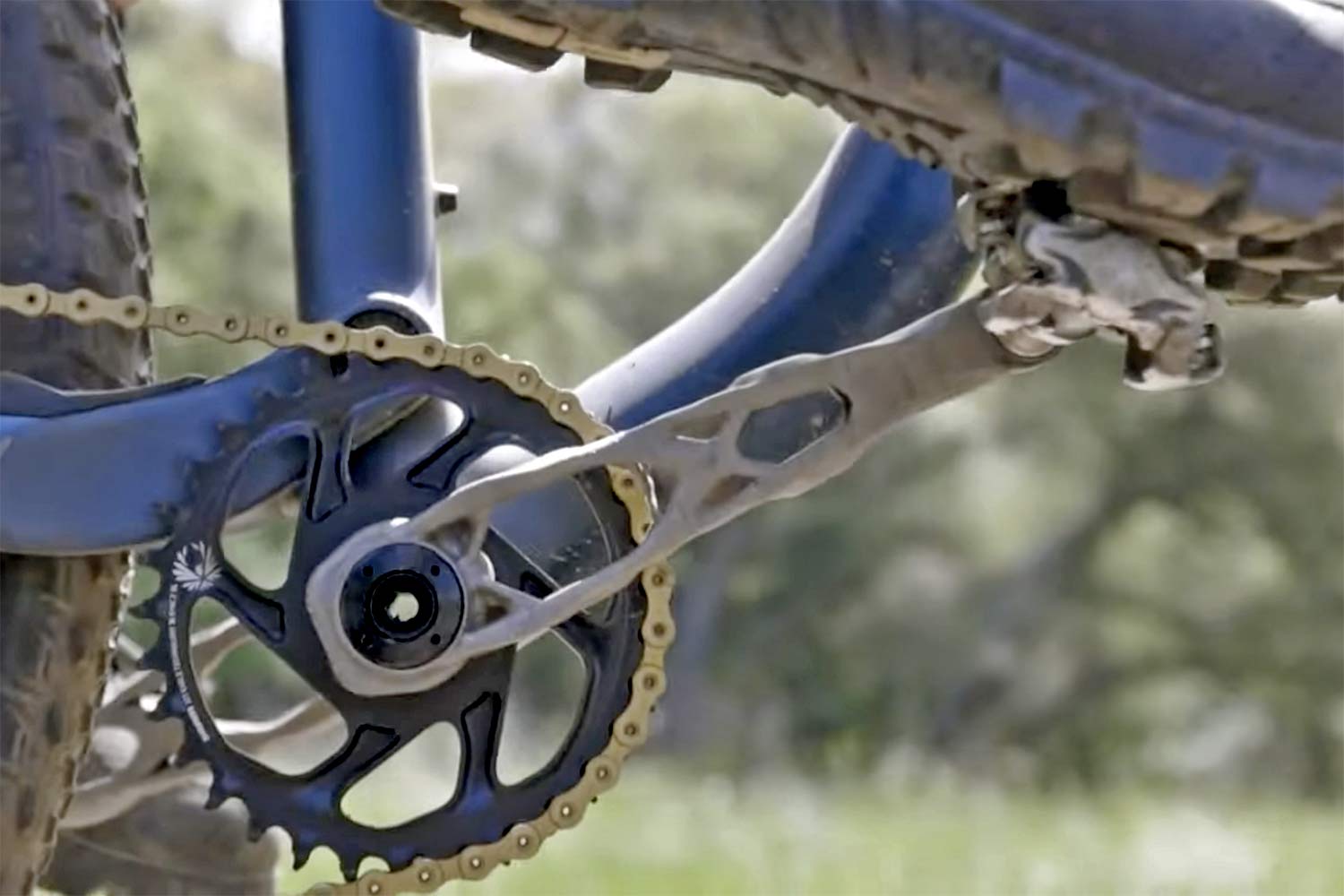 SRAM is starting to reap real, usable crankset prototypes from their development partnership with Autodesk via their Generative Design Field Lab in Chicago.

When and to what extent we’ll see a completely reimagined SRAM crankset come to market based on this Ai design process is still up in the air. But there’s no ignoring that SRAM has put a lot of work into this new design approach, and they’ve been ride testing several iterations of mountain bike cranks designed by machines, out on real trails…

Using Autodesk generative design, SRAM was able to start from a blank slate and let artificial intelligence dictate the optimal form for the prototype crankset based on the active forces in a crankset and various automated manufacturing processes.

So far it seems SRAM has used the automated design process to develop both CNC-machined alloy and additive manufactured, 3D-printed sintered titanium crankset prototypes. Both variants allow the Autodesk generative design software to make decisions based on the specific manufacturing technique, and both result in significantly different design solutions to the same problem.

SRAM’s design engineers have been collaborating with Autodesk Generative Design since at least the start of 2019, as they’ve worked to develop a new approach to product design and optimization, at an accelerated pace.

Now they’ve also caught the attention of the manufacturing nerds at Forbes.

“If I think about the tools that I’ve used in my 18 years as a designer director at SRAM, not much has changed“, said Dhiraj Madura, Global Director of Industrial Design at SRAM. “We do a lot of iteration when designing parts, but sometimes it’s not going very fast in the time cycle that we have… As our products get more complicated, we’re going to have to look at new methods and new tools.”

It hasn’t only been cranks either, Autodesk shared this image of Madura holding a similarly generative design stem prototype a couple of years ago, too.

The crank prototype project seems to have started only at the start of 2020, with the SRAM & Autodesk teams working collaboratively remotely thanks to the cloud-based nature of Autodesk’s Fusion 360 modeling software.

While the footage in that 2 1/2 minute video above is most deliberately short on fine details, it’s clear SRAM has been putting several versions of these AI-designed prototypes through their paces.

And the test riders don’t seem to be taking it easy either, appearing to spend time riding singletrack and a number of bikepark-style technical features.

Interestingly, one of the generative-designed, CNC-machined SRAM crank prototypes looks a bit similar to the conventionally-designed Ignite Catalyst cranks we discovered back in early March (which you can already buy now).

Working in the cloud-based Fusion 360 platform, SRAM engineers start with constraints like their standard direct mount chainring interface & DUB bottom bracket at one end, and pedal spindle at the other end.

The design forces get calculated in and out comes a SRAM+Autodesk prototype crank arm design that can hollow out unnecessary material, leaving a lattice of Alien organic-looking struts that evenly carry loads and maintain stiffness from pedal to drivetrain.

The 3D-printed titanium prototype takes advantage of selective laser sintered additive manufacturing tech. Those focused lasers actually compact & harden titanium powder into a solid structure one little fiery burst at a time, heating it up just below the point where the material would liquefy. One tiny layer at a time, starting with the radial support structure (left, above), the process builds up until you have the completed crank arm structure (right, above).

That allowed SRAM to produce 9 complete pairs of crank arms in one 3D-printed batch, which then get the supporting inner structure removed, and both the pedal interface & BB/chainring interface CNC-machined in next.

SRAM told Forbes that these Autodesk generative design prototypes aren’t necessarily destined to becoming a consumer-ready mountain crankset, as much as they are about helping the engineering team understand how to evolve their next gen designs. But I think I speak for a lot of cyclists who would love to see a wild-looking crankset like become available.

We’ve reached out to SRAM for thoughts as to if or when we could hope alien-looking cranks like these might hit the market, but they haven’t commented officially yet.

Think this all sounds familiar? We caught up with Autodesk partnering with Decathlon to explore 3D-printed aluminum bike frames based on generative design at the end of 2020. We’ve also seen tons of great 3D-printed titanium goodies in recent years, from the lightest-ever clipless pedals to a spaceship GPS-mount to aerobars to lots of ti frame details…