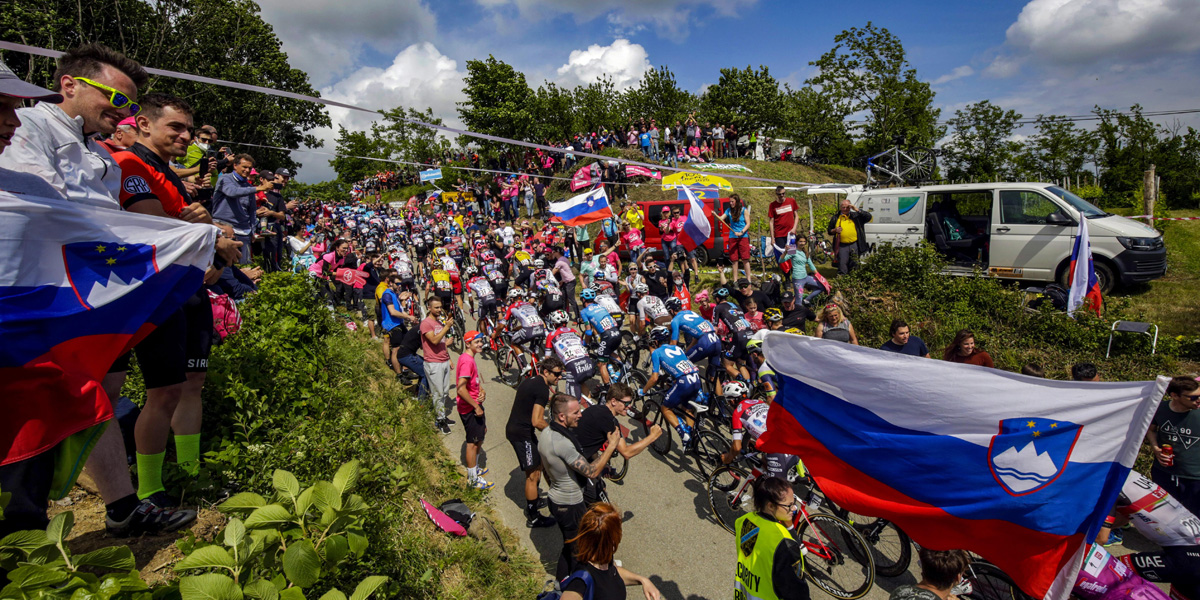 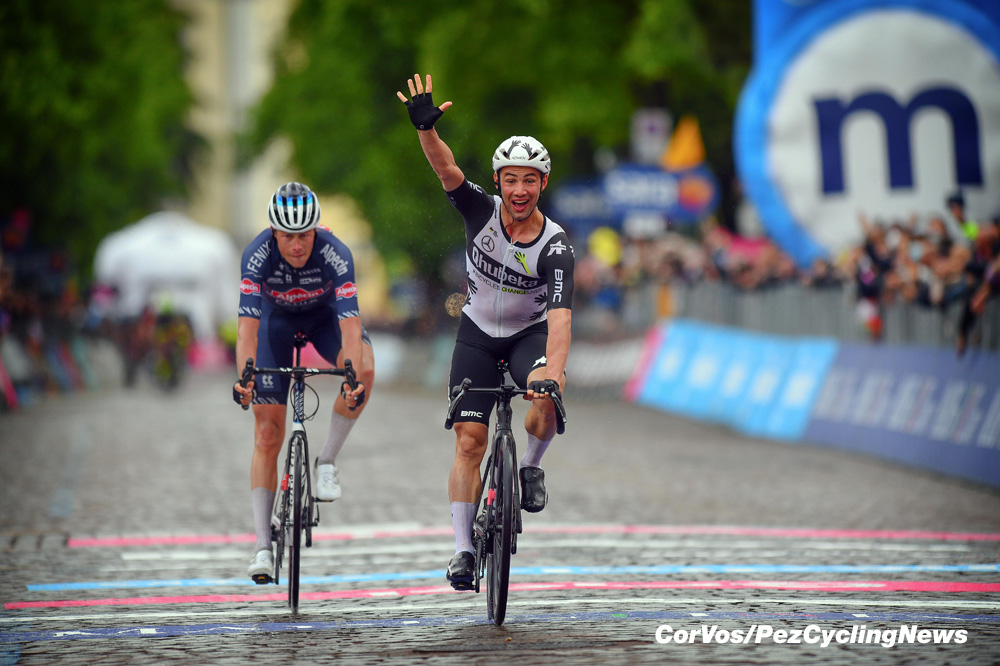 Victor Campenaerts won stage 15 of the Giro after 147 kilometres, which was neutralised for a while due to an early big crash. The Belgian from Qhubeka Assos was the best of the early break at the finish in Gorizia. He beat Oscar Riesebeek (Alpecin-Fenix) in a two man sprint. 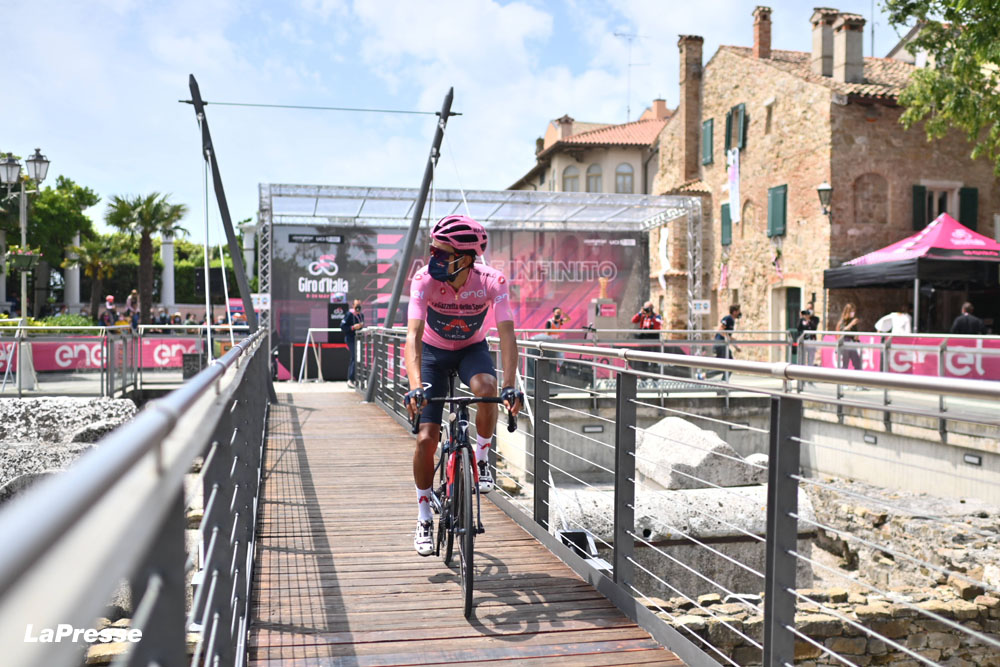 No problems for Egan Bernal

Giro stage 15 route: A short stage with a cross-border circuit between Italy and Slovenia of approx. 40km. The route begins flat, all the way to Sagrado, and then clears the Monte San Michele climb. Starting in Mossa, the circuit features three passes over the steep, 2km long Gornje Cerovo climb (each awarding KOM points), and a succession of tough climbs and descents. After the third lap, the route goes back to Italy through San Floriano del Collio, passes north of Gorizia and crosses the border again, passing through Nova Gorica. The last 5km are raced partly in Slovenia and partly in Italy. Past Piazza Europa, the route ascends for nearly 1 km at 14% max. gradients, and then takes a technical descent leading back to Italy. Over the final kilometre, the route covers a short stretch on stone pavers. The home straight is 300m long, on tarmac road. 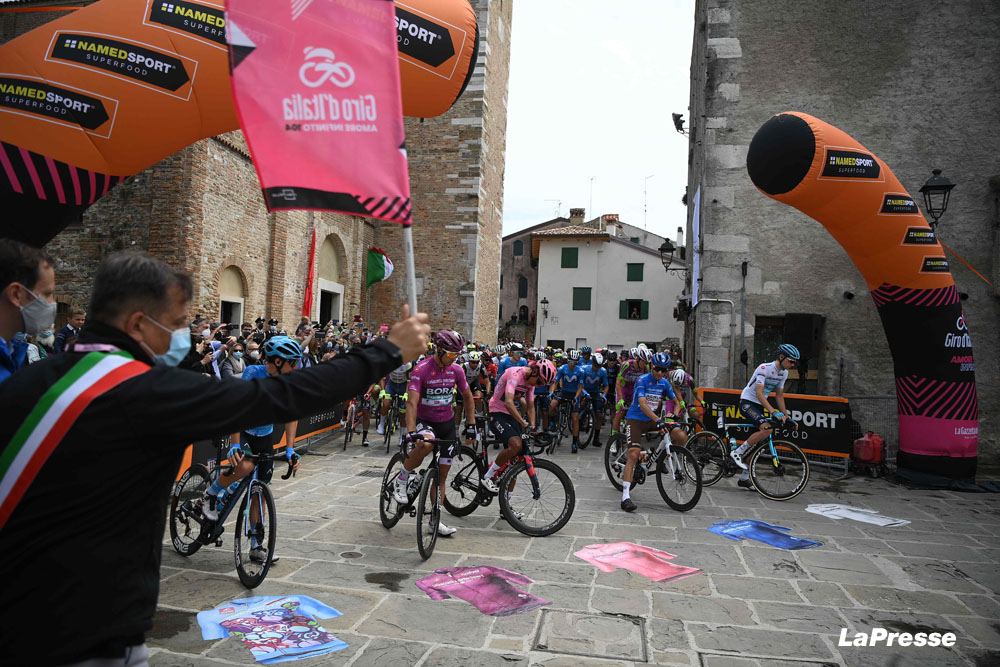 After a very quick start, the riders had to stop after a massive crash in the peloton, the organisers decided to neutralise the stage. There were several victims who required medical assistance. Jos van Emden, Emanuel Buchmann (sixth overall), Natnael Berhane and Ruben Guerreiro all had to abandon. Immediately after the restart, there was a massive attack. 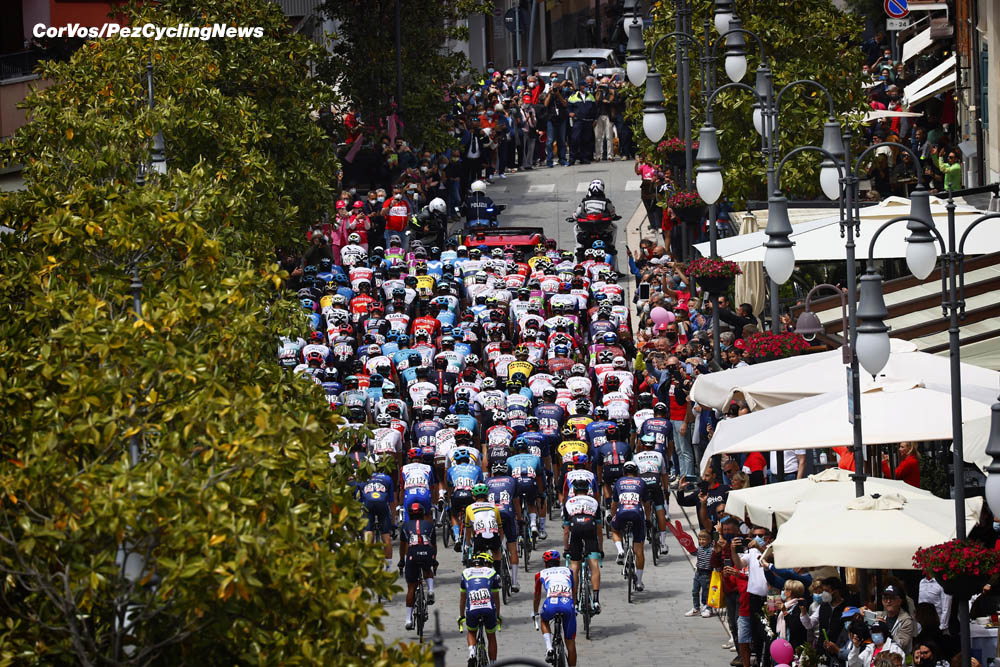 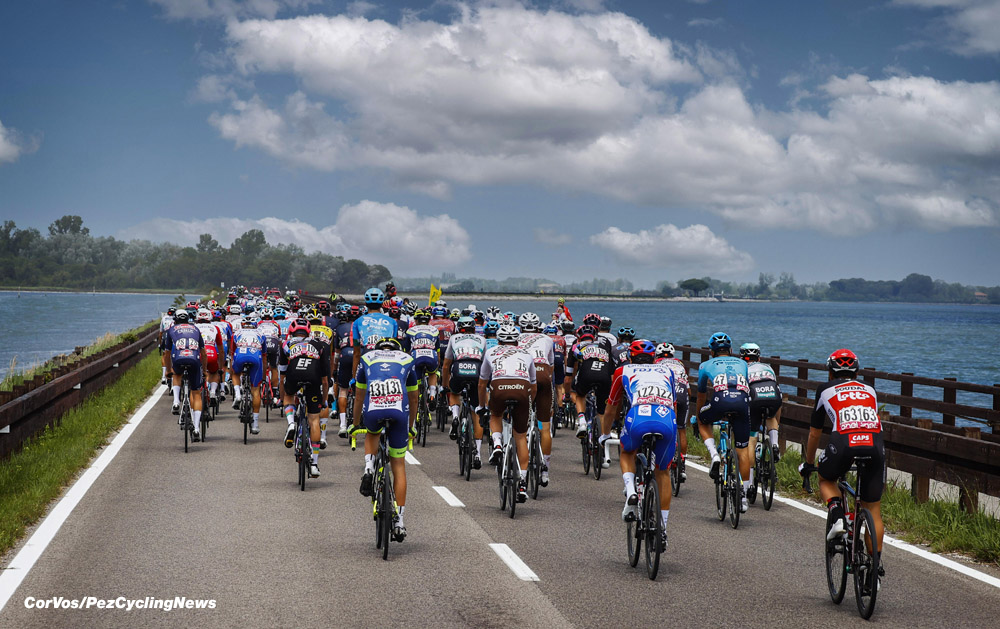 The road into Slovenia 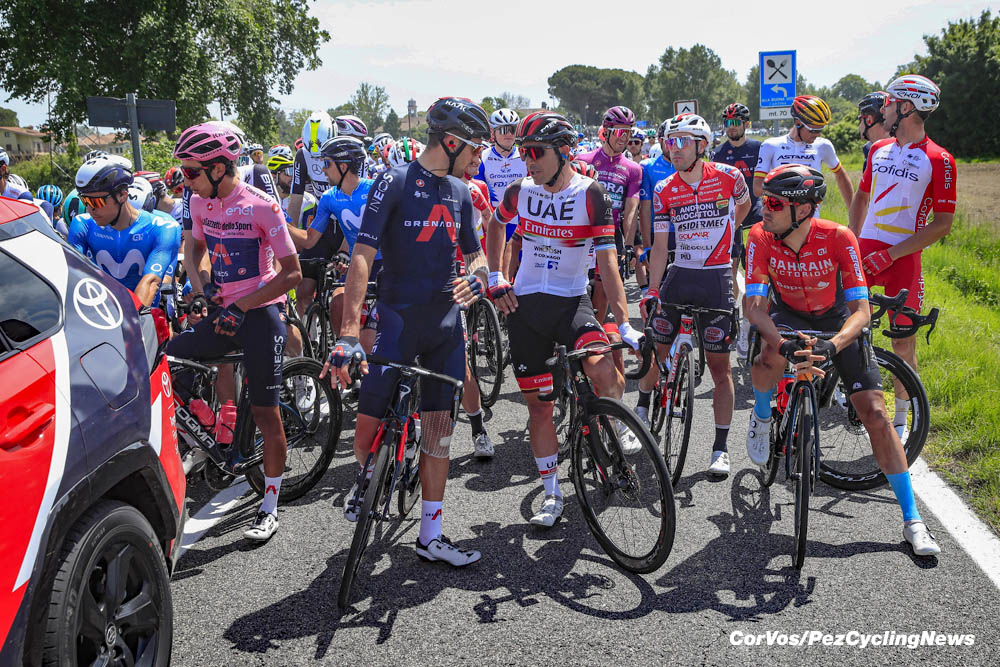 The race had to be stopped due to a big crash 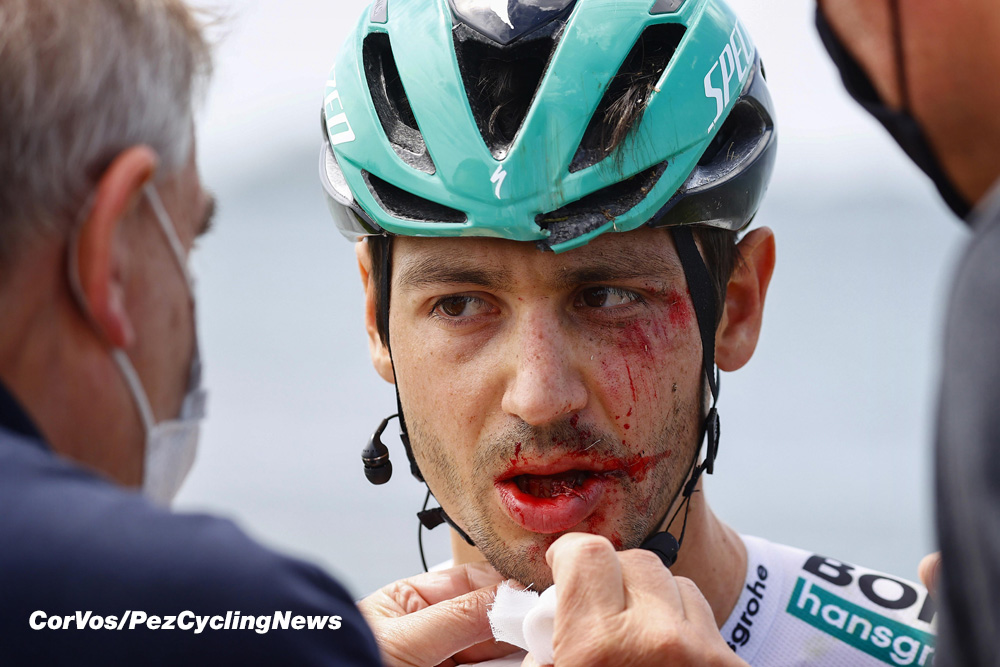 A group with Alexis Gougeard (AG2R Citroën), Filippo Tagliani (Androni Giocattoli-Sidermec), Andrea Pasqualon (Intermarché-Wanty-Gobert) and Matteo Jorgenson (Movistar) counter-attacked, but they couldn’t join the front group. There was no team in the peloton that was ready to chase. Peter Sagan had already indicated that he would be defending the points jersey, and not on the stage victory. As a result, the work was left up to INEOS Grenadiers, which had no reason to catch the leading group. 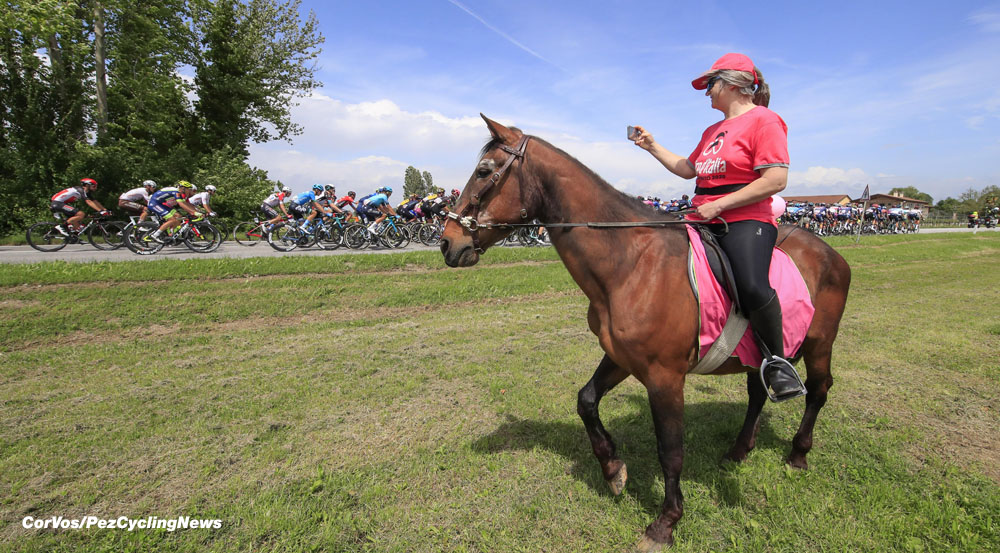 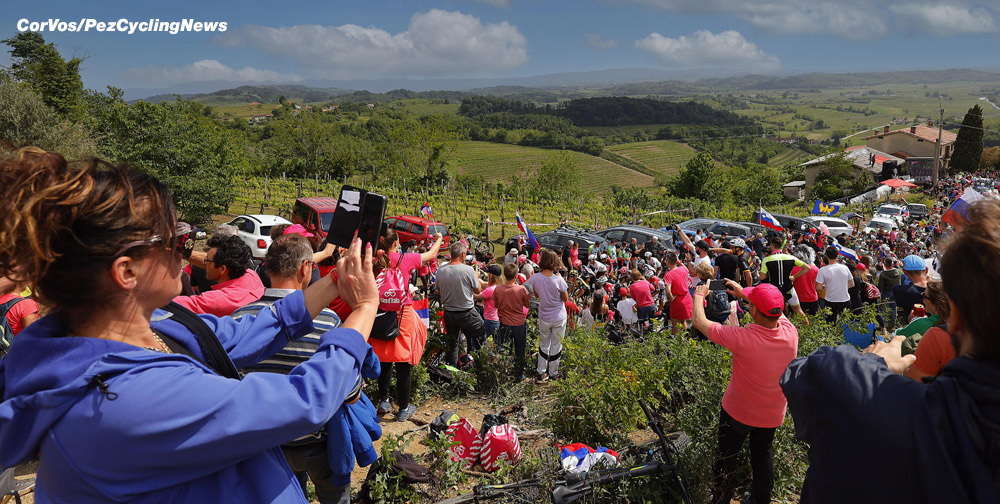 The fans were out to see the Giro in Slovenia

The leading group soon had more than 12 minutes on the men of the pink jersey. The riders had to climb the Gornje Serovo (2.5km at 7%) in Slovenia three times. The Slovenian cycling fans knew the route and had turned out in their hundreds. De Bondt took the most mountain points on the first two climbs. 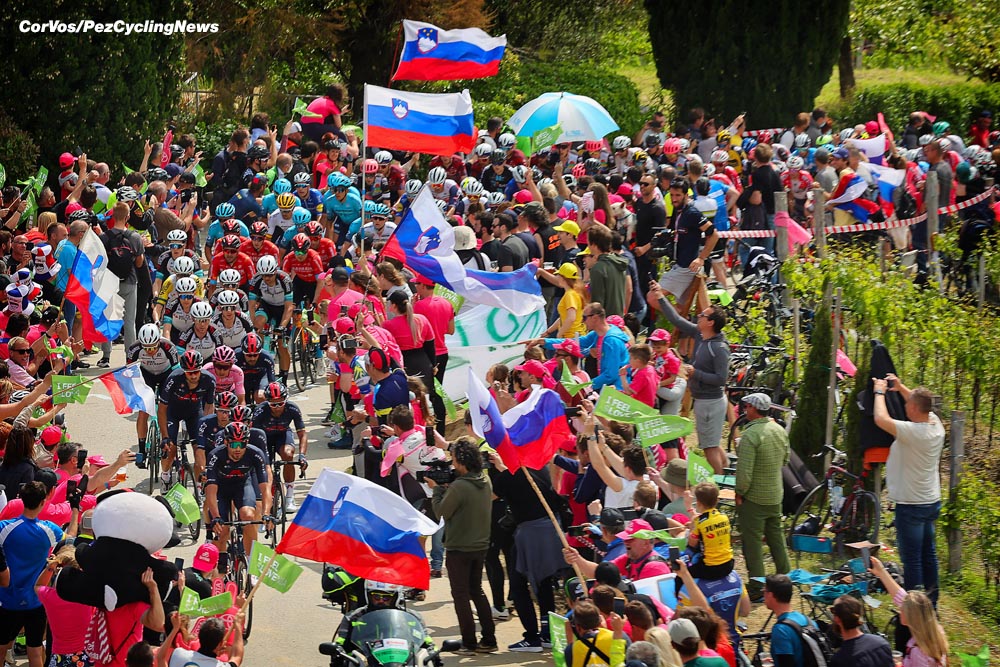 The Gornje Cerovo climb looked quite normal for the Giro 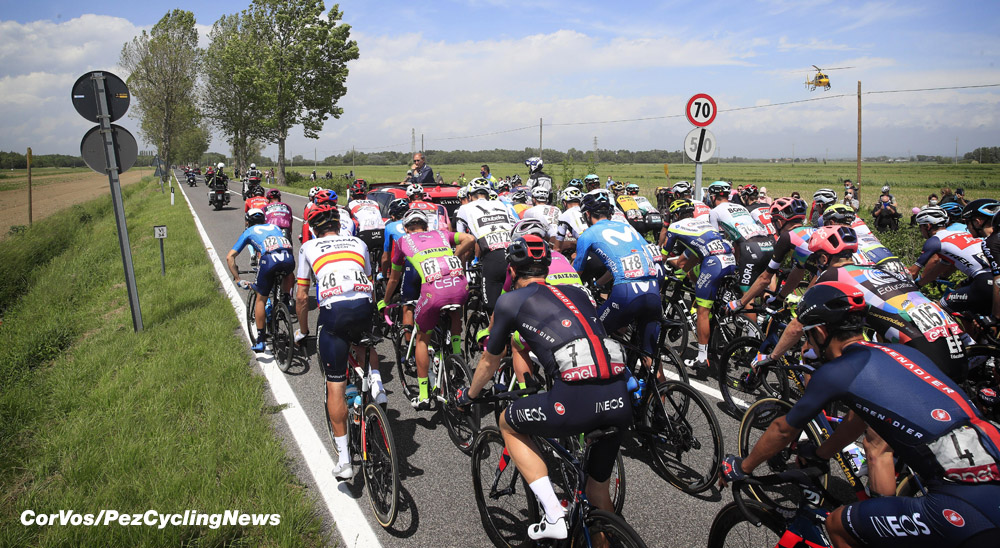 In the last thirty kilometres, the games for the stage victory started in the leading group, although it had started to rain in the border area between Italy and Slovenia. Campenaerts, Riesebeek and Torres started with a lead of 30 seconds on the third and last climb of Gornje Serovo. Riesebeek and Campenaerts managed to drop Torres just before the top and continued their effort together. Hermans attacked from the chasers and crossed the top in a group including Mollema, Consonni, Vanhoucke, Arndt and Cataldo, 23 seconds behind the two leaders. 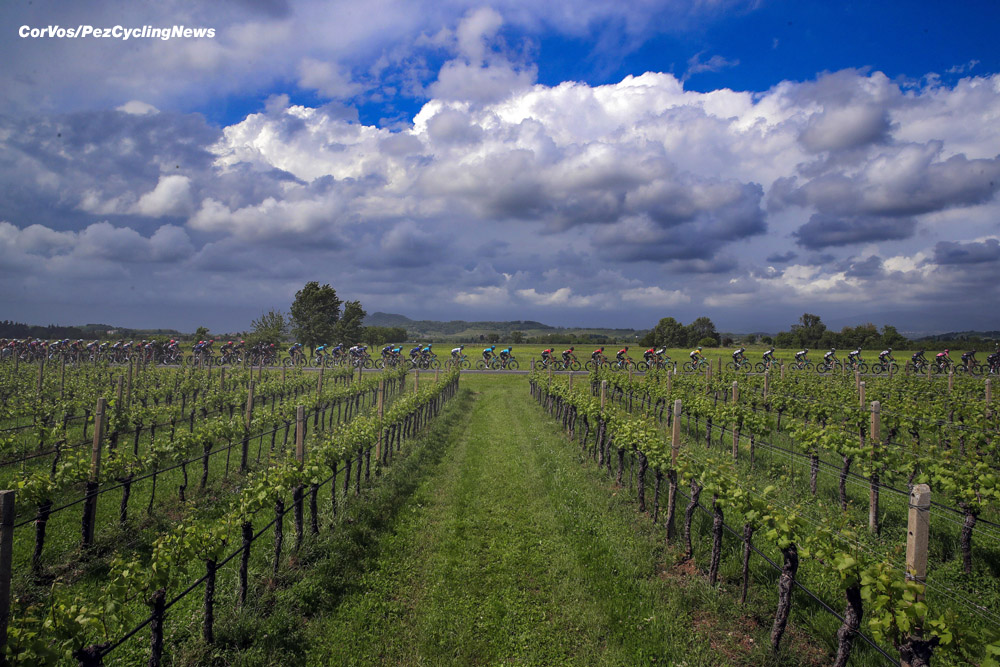 The rain won’t help those vines 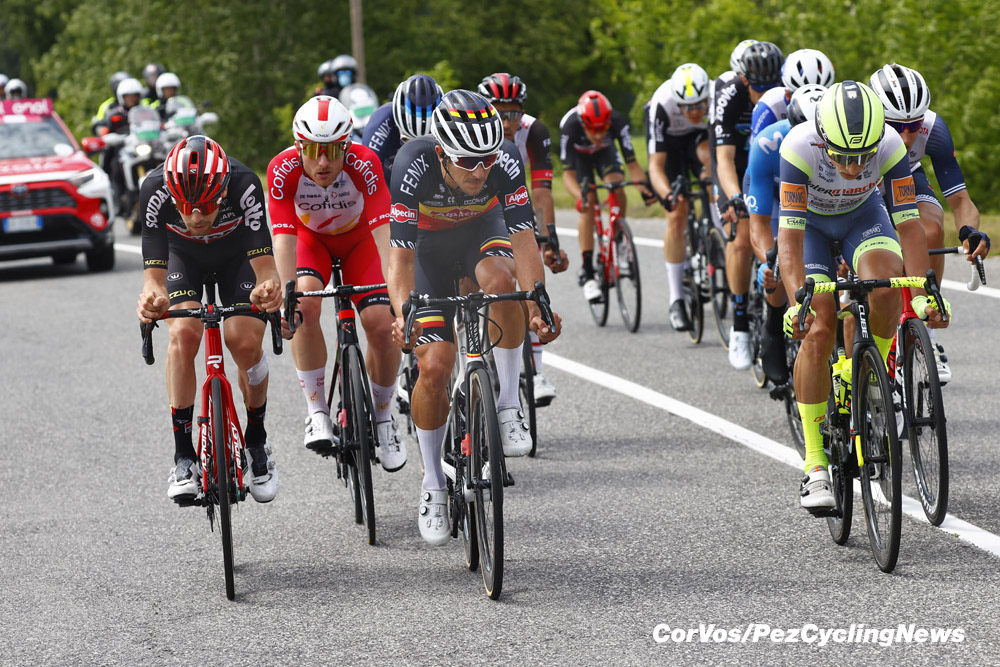 The break had a big gap 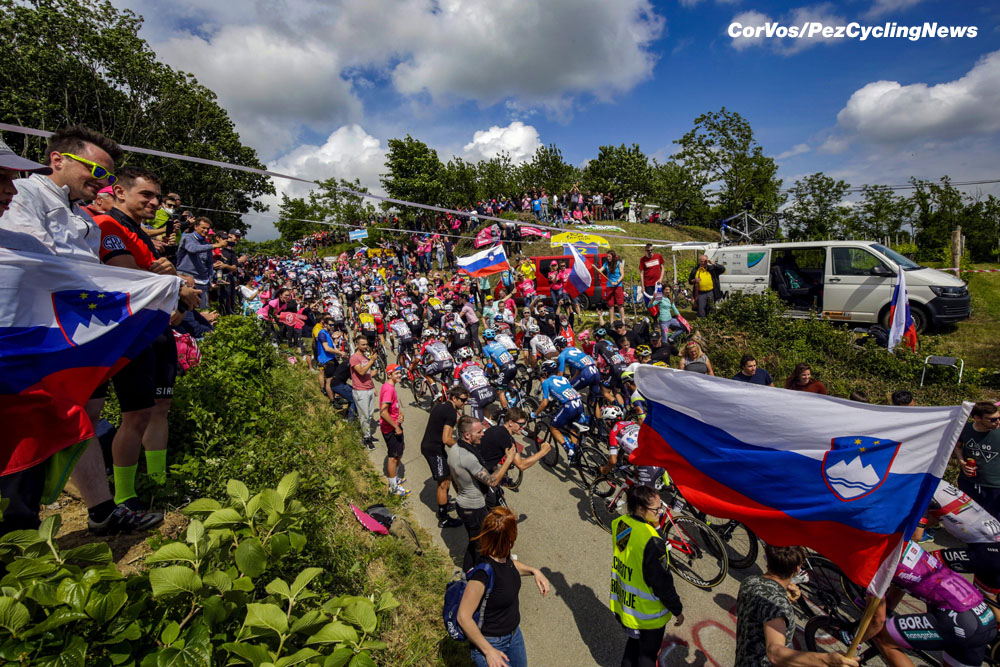 It was great to see the fans roadside 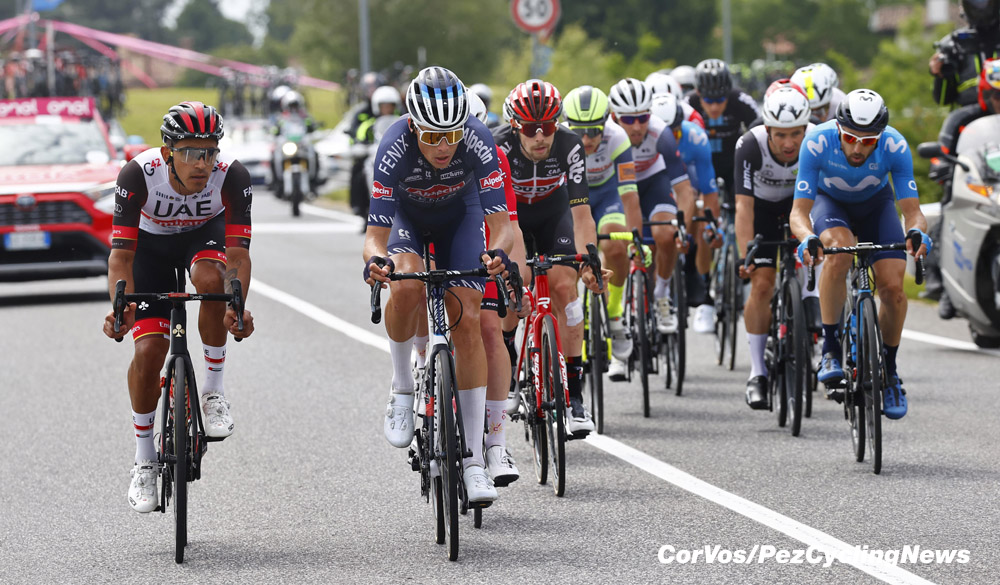 The win was going to come form the break

With a lead of 15 seconds, the two started the Cerovo, with ramps up to 14%, Riesebeek again opened the attack. Campenaerts reacted and took a few meters away from Riesebeek at the top, but the Alpecin-Fenix ​​rider was not surprised. In the chase, Mollema, Hermans, Arndt and Consonni were the strongest, but they were still at more than 10 seconds. 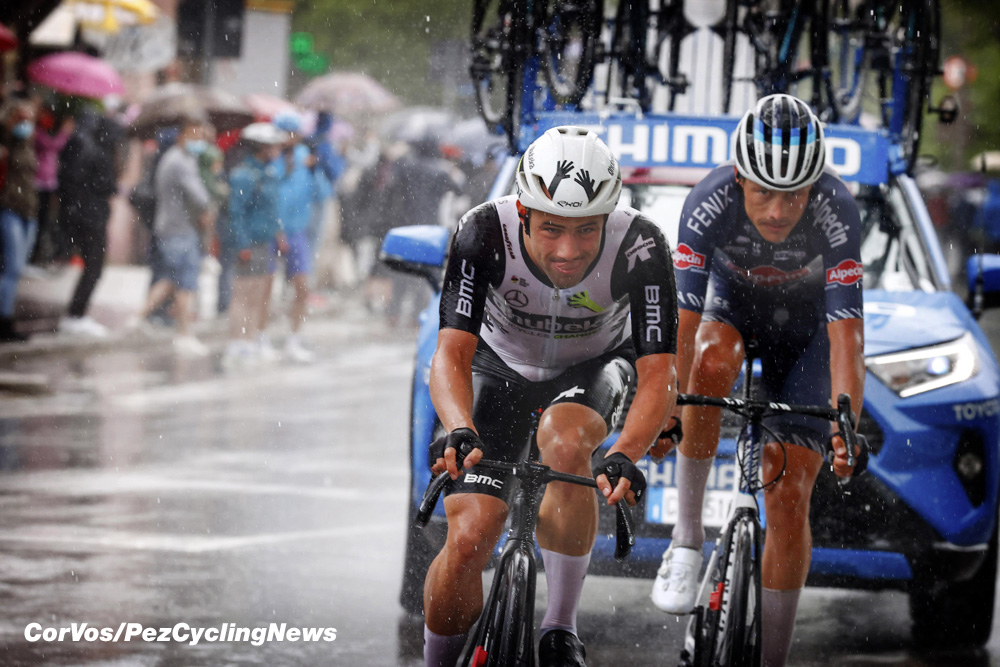 Would you bet on Campenaerts winning the sprint? 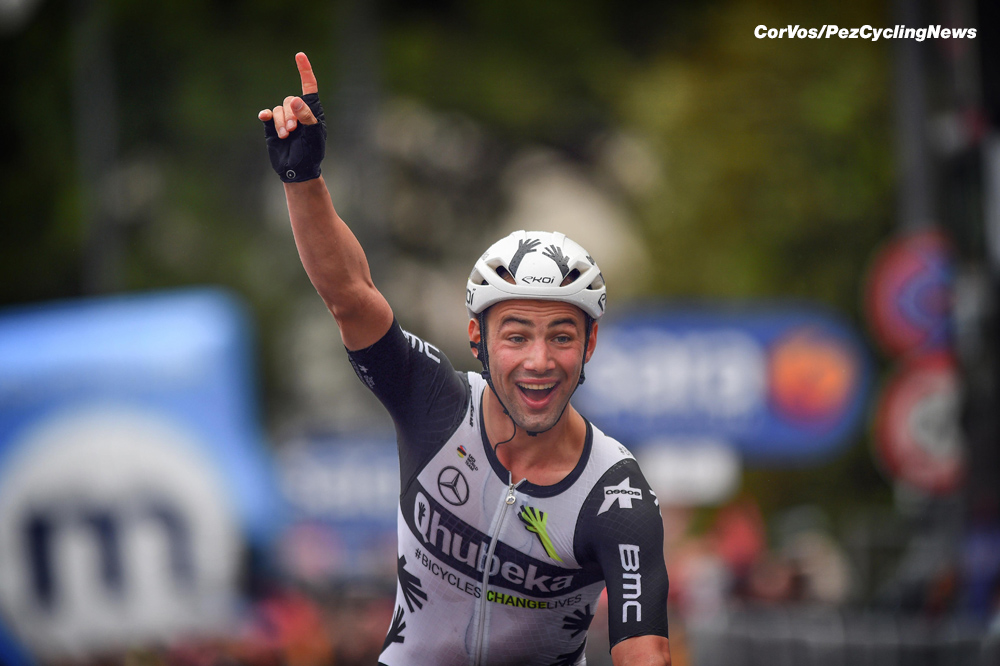 On the wet, technical run into town, it was again Campenaerts who took all the risks. Each time he got 20 meters, but each time Riesebeek managed to close the gap. In the streets of Gorizia it was going to be a two-up sprint on the cobblestones of the city centre. Riesebeek pushed Campenaerts to the edge, but it was the Belgian who won the stage. Seven seconds later, Arndt sprinted to third place, ahead of Consonni and Hermans. The peloton did not take any risks in the rainy final and came wet but safe. 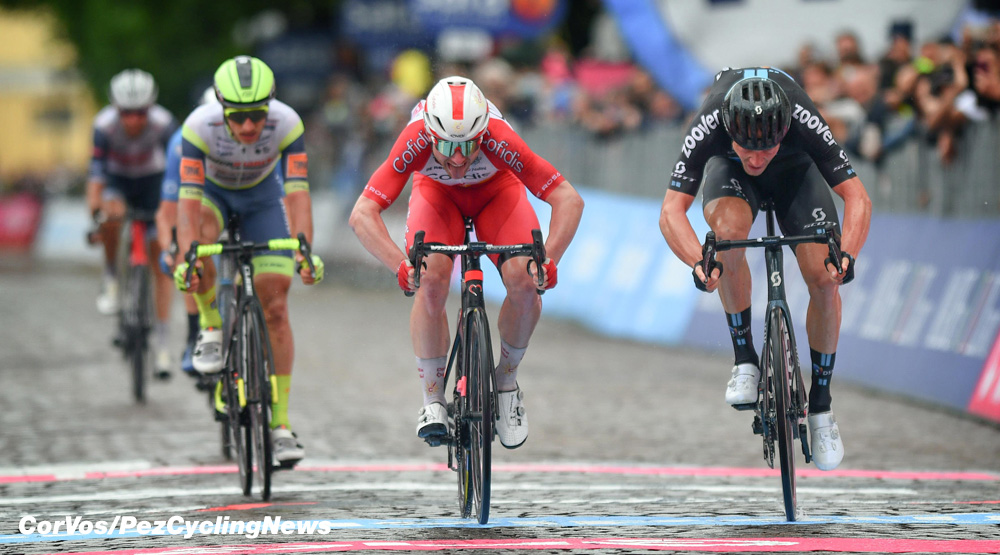 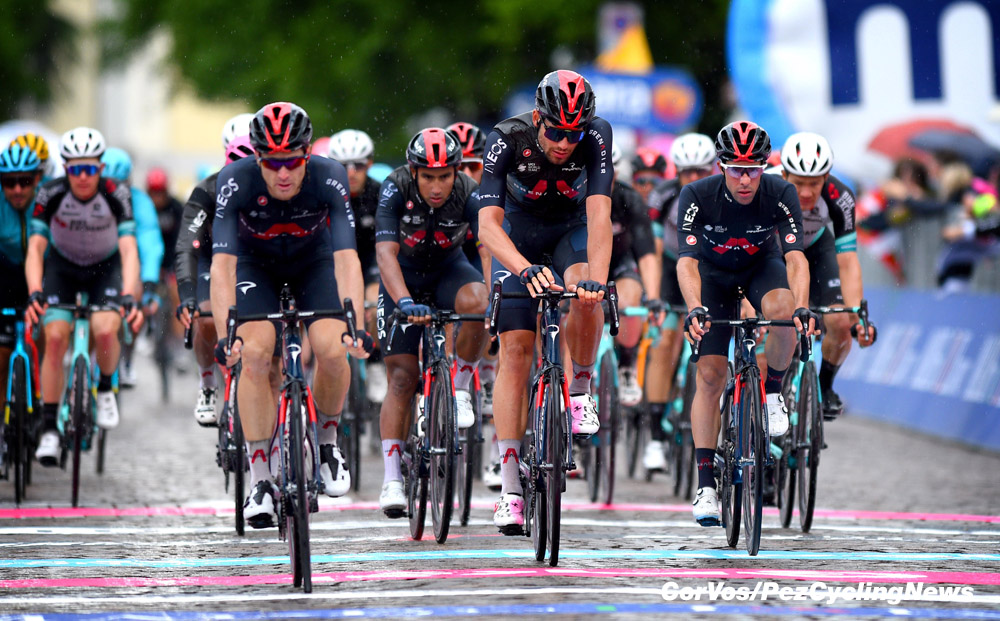 Stage winner, Victor Campenaerts (Qhubeka Assos): “It was just an amazing day for the team. As we don’t have climbers for the next few stages in the mountains, we decided to go all in today. We rode as one: ubuntu – ‘I am because we are’. We gave everything from the first few kilometres, what a fantastic day. We did a great job and I am so happy I could finish it off. Now we have three victories in the Giro, which is simply fantastic for a team that struggled to stay alive. We’re making an important statement as we are racing for the greater purpose of changing lives with bicycles: to provide bicycles in Africa for better education and better lives.”