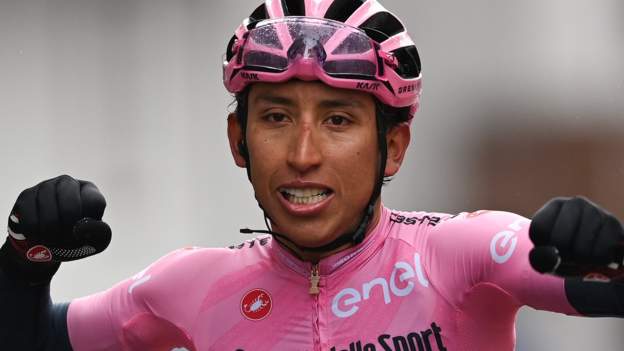 Has Egan Bernal established an unassailable lead in the Giro d’Italia?

Or are we set for dramatic final week, with the 2019 Tour de France champion facing challenges from riders such as British pair Hugh Carthy and Simon Yates?

With Tuesday the last rest day of the race, BBC Sport takes a look at the state of play going into the final five stages.

Maglia rosa is Bernal’s to lose

After a 2020 ruined by injury, Egan Bernal hinted at his revival on the gravel roads of stage 11. He backed it up on the famous Monte Zoncolan on stage 14. And he proved it beyond doubt as he coolly removed his rain jacket on Monday to display the maglia rosa – the leader’s pink jersey – as he crossed the line to claim a dominant victory in the Giro’s ‘queen’ stage.

Bernal is back, and although the race is far from over it will take something special for anyone to deny the Colombian his second Grand Tour win.

Nobody could live with Ineos Grenadiers’ leader as he distanced all challengers to take victory in the ski resort of Cortina d’Ampezzo on stage 16, extending his advantage to two minutes 24 seconds in the general classification over Italian Damiano Caruso of Bahrain-Victorious, with third-placed Briton Hugh Carthy more than a minute further behind.

Despite concerns over a lingering back problem – which badly affected his form last year – prior to the race, the 24-year-old appears to be going from strength to strength, taking a second stage victory in Italy having also won stage nine.

A special mention here must go to Jumbo-Visma’s George Bennett, who after completing the energy-sapping Zoncolan returned down the mountain to accompany domestique Edoardo Affini to the finish.

Not to mention Bennett’s finish in Cortina, inexplicably still carrying his musette feed bag that riders usually discard a few minutes after they receive them about halfway through the stage.

So, who can stop Bernal from here?

Britain’s Simon Yates, who won the Tour of the Alps in April, had looked strong in second place but lost over two and a half minutes on Monday to fall to fifth overall, four minutes 20 seconds off the lead.

Early contender Remco Evenepoel blew up on Monday in the second week of his first ever Grand Tour – the talented 21-year-old now over 28 minutes behind despite trailing Bernal by only 15 seconds going into the first rest day.

The Deceuninck-Quick Step rider was involved in a horrifying crash during the 2020 Il Lombardia, and this is his first race back after nine months out injured.

However, on the back of a third-placed finish at last year’s Vuelta a Espana, which included a stunning victory on the famed Angliru, EF Education-Nippo’s Carthy could yet cause Ineos problems. He looks as strong now as he has since that race.

“We woke up, we saw rain this morning and Hugh said ‘we have a chance to win the Giro today’,” revealed team-mate Tejay van Garderen on Monday.

Despite a shortened route hindering those plans, Carthy’s team meant business on stage 16 as they forced the pace – although ultimately the Lancashire-born rider was unable to stick with Bernal.

But the current time deficit has been clawed back before – just ask Yates himself, who saw Chris Froome secure overall victory after a stunning solo ride on stage 19 in 2018.

There will be opportunities to attack Bernal – if his rivals can take them.

When the race resumes on Wednesday, the riders must tackle two category one climbs during Wednesday’s 17th stage to Sega di Ala – the final 11km climb bringing an average 9.5% gradient.

Following a relatively flat stage 18, stage 19 on Friday offers another summit finish to Alpe di Mera at an average gradient of 9.1%. The race’s penultimate day on Saturday then offers a stern test too.

Stage 20 sees the riders twice climb above 2,000m, with a first 23km ascent of the San Bernardino pass at an average of 6.2% and a second on the Splugen Pass, before a gruelling day ends with peak gradients of 13% to Alpe Motta.

Sunday’s closing 29.5km individual time-trial to Milan could then prove decisive – as it did last year when Britain’s Tao Geoghegan Hart claimed overall victory on the final stage. 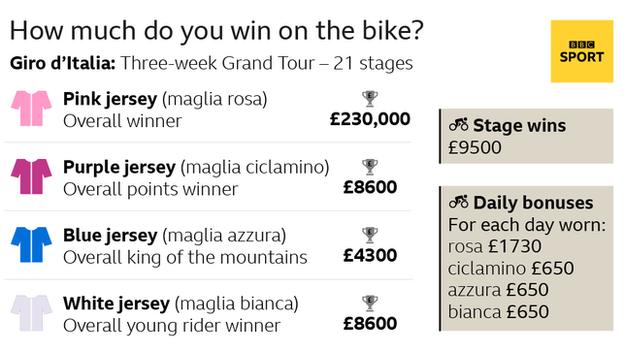