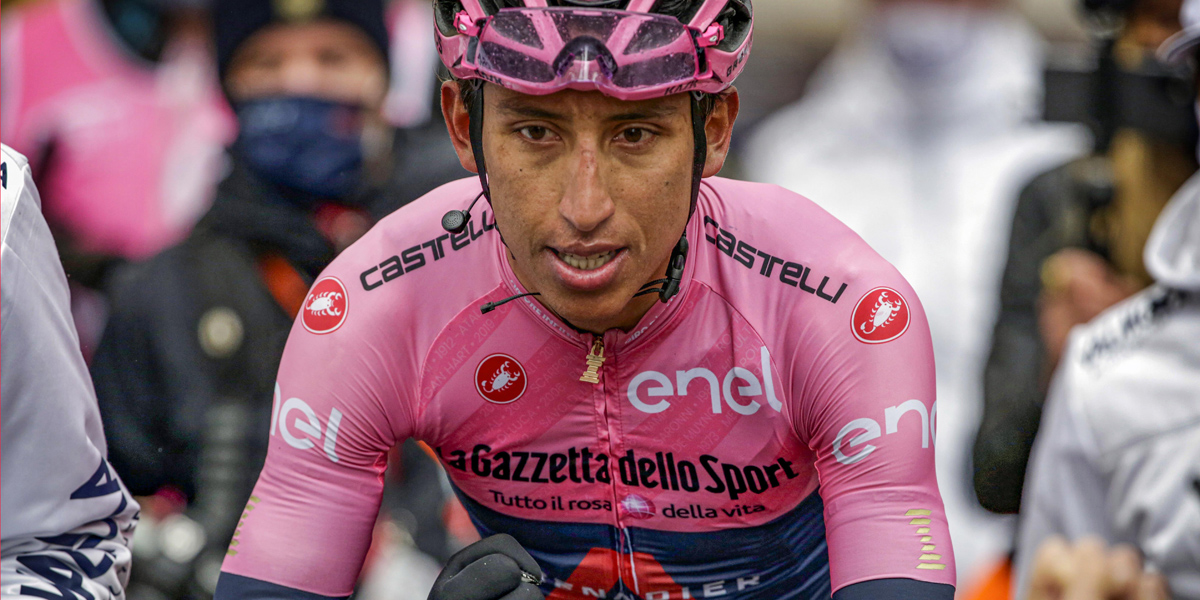 Giro d’Italia Stage 16: What was going to be a decisive stage was shortened and due to the weather was without live TV for the finalé. This didn’t stop the race leader, Egan Bernal (INEOS Grenadiers), stamping his authority on the climb of the Passo Giau and soloing to the finish in Cortina for the stage win and more lead time. Romain Bardet (DSM) and Damiano Caruso (Bahrain Victorious) finished second and third at 27 seconds. 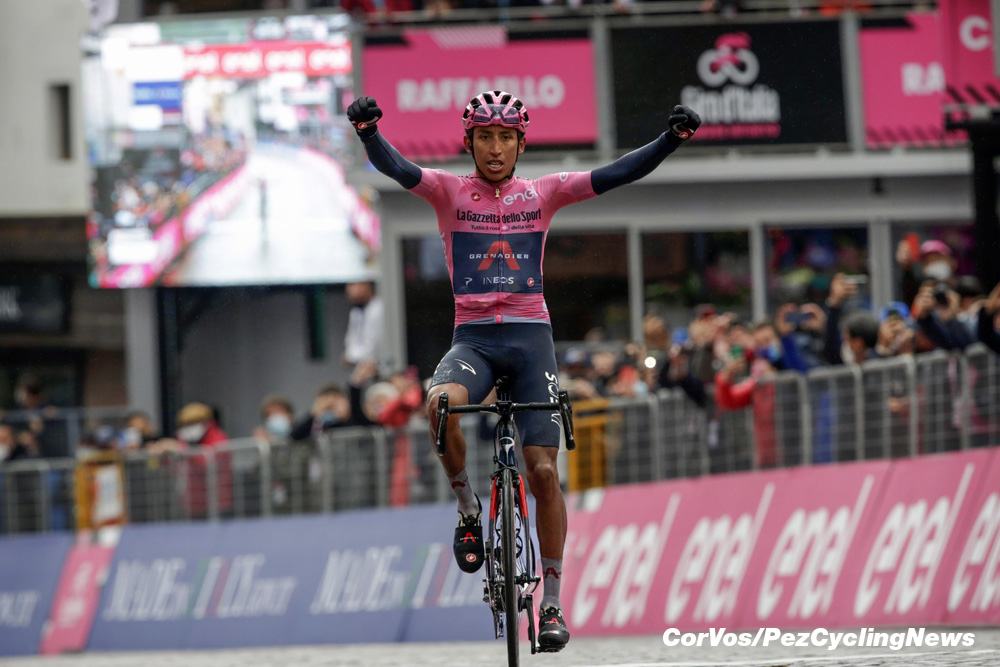 The shortened Queen stage of the Giro d’Italia through the Dolomites was won by overall leader Egan Bernal. After 153 kilometres, the INEOS Grenadiers rider was the first into Cortina d’Ampezzo, after dropping all the other competitors on the Passo Giau. Bernal has expanded his lead in the GC. Damiano Caruso and Romain Bardet limited the damage to finish with in 30 seconds. 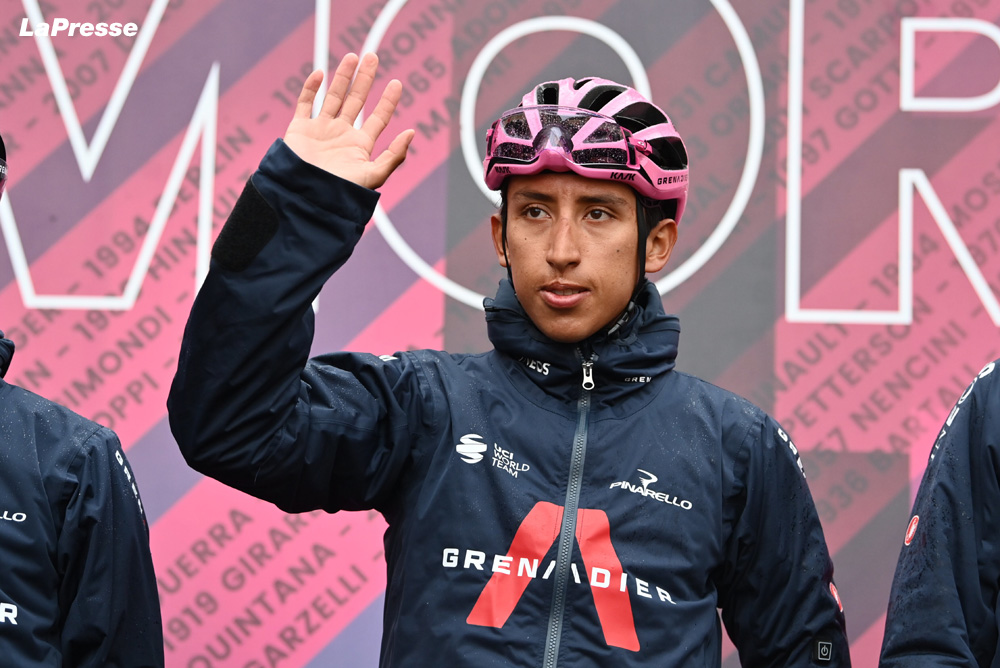 A cold and wet start to stage 16 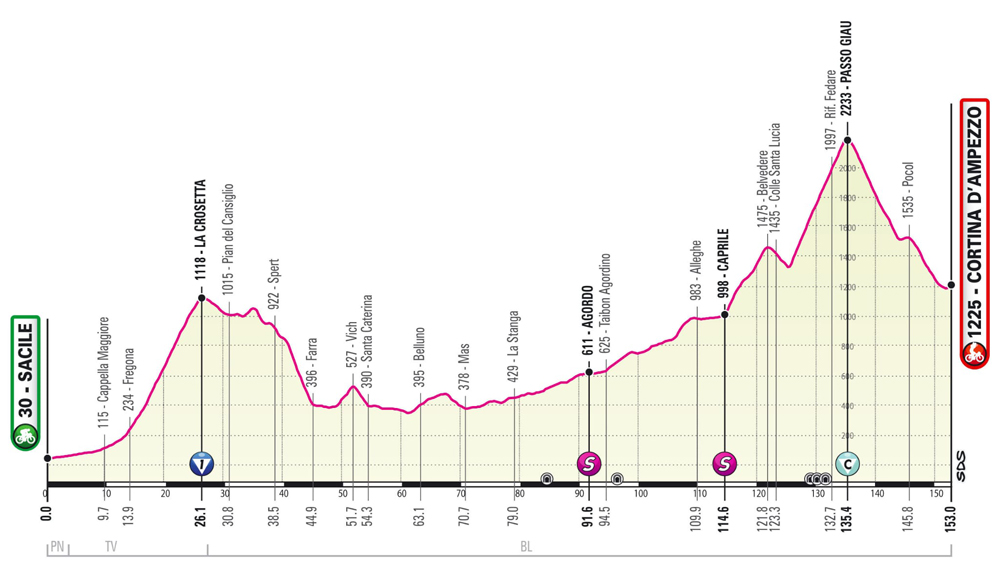 Giro stage 16 route: The Giro d’Italia organisers, RCS Sport, have changed the route of today’s stage, 153km long, runs from Sacile to Cortina d’Ampezzo, and features the Passo Giau (Cima Coppi) before the descent towards Cortina. 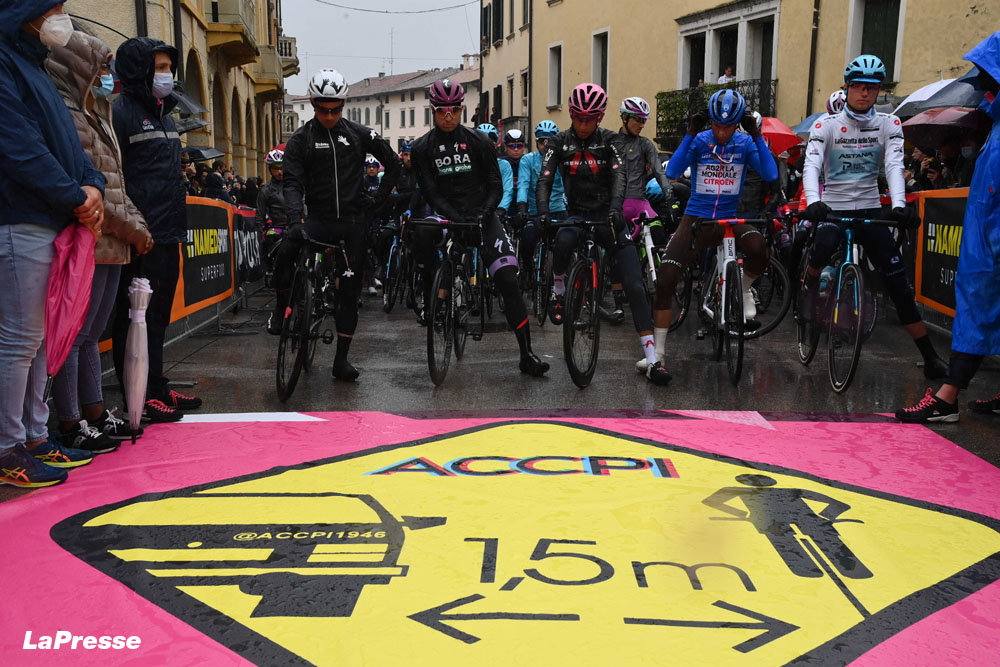 There had been heavy rain and cold conditions predicted for the Queen stage 16 through the Dolomites, so the organisers decided to shorten the stage after some discussions. Just before the start, the loop with the Passo Fedaia and the Passo Pordoi was canceled due to the unpredictability of the weather at high altitude. As a result, the stage was shortened from 212 kilometres to 153 kilometres, with La Crosetta (11.6km at 7.1%) at the beginning and the Passo Giau (9.9km at 9.3%) with the summit at 17 kilometres from the finish in Cortina d’Ampezzo. 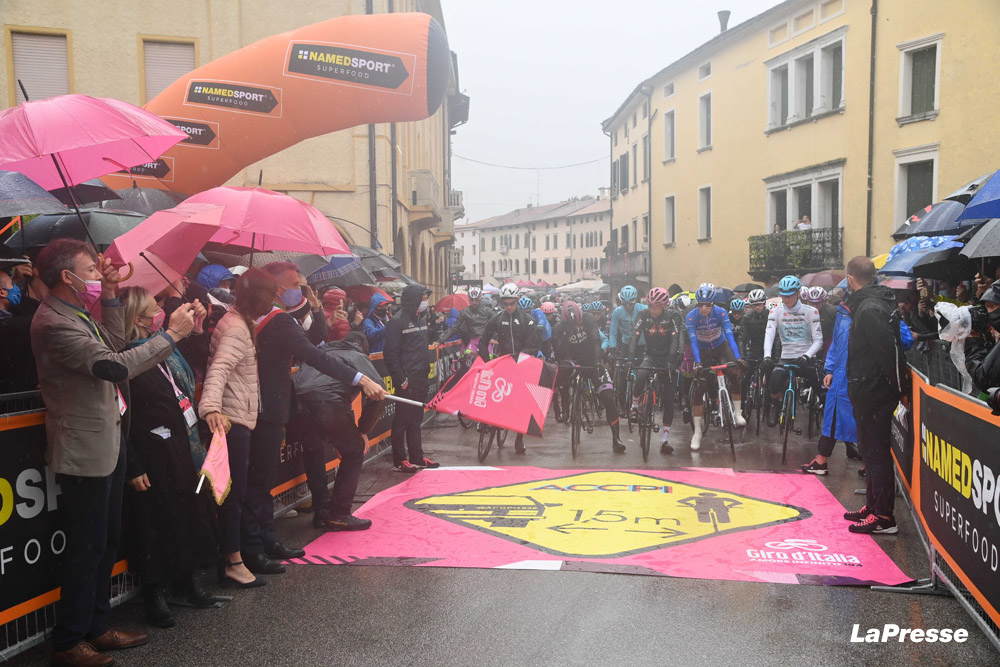 50 kilometres cut from stage 16, but still a hard day ahead

A leading group of more than 20 riders took off from the start. These include Koen Bouwman (Jumbo-Visma), Harm Vanhoucke (Lotto Soudal), Louis Vervaeke (Alpecin-Feix), the best placed Daniel Martin (Israel Start-Up Nation) and KOM Geoffrey Bouchard (AG2R Citroën). After Bouchard had taken 40 points on the climb, six riders from the original leading group escaped on the wet descent. 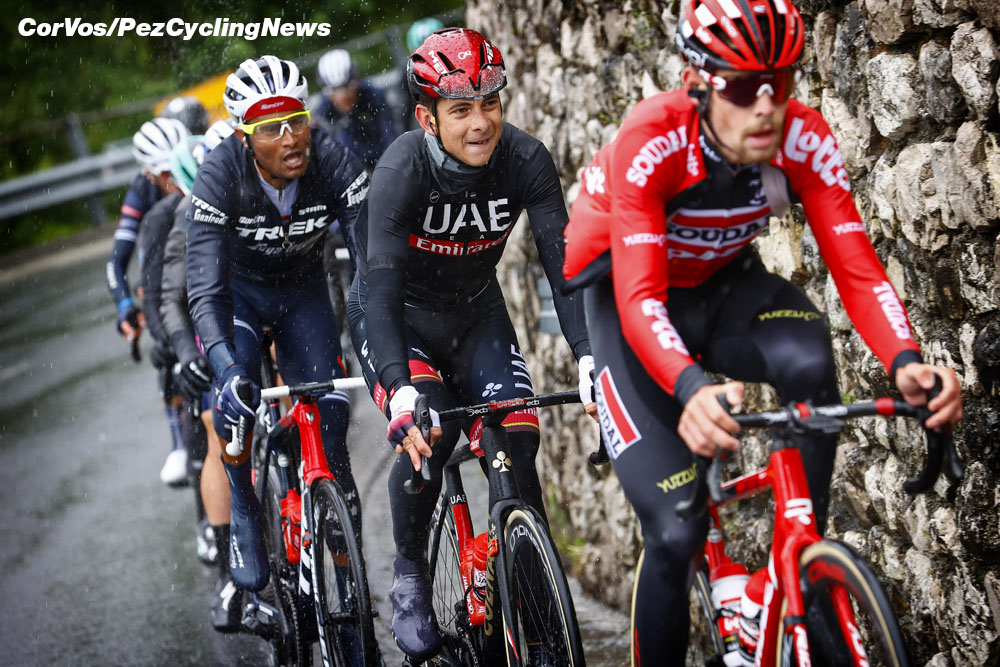 Harm Vanhoucke (Lotto Soudal) was part of the early break

Vincenzo Nibali, Amanuel Ghebreigzabhier (Trek-Segafredo), Davide Formolo (UAE Team Emirates), Gorka Izagirre (Astana-Premier Tech), João Almeida (Deceuninck – Quick-Step) and Antonio Pedrero (Movistar) got together and turned into the valley round the base of the Passo Giau. The chasing group was soon 3 minutes down. 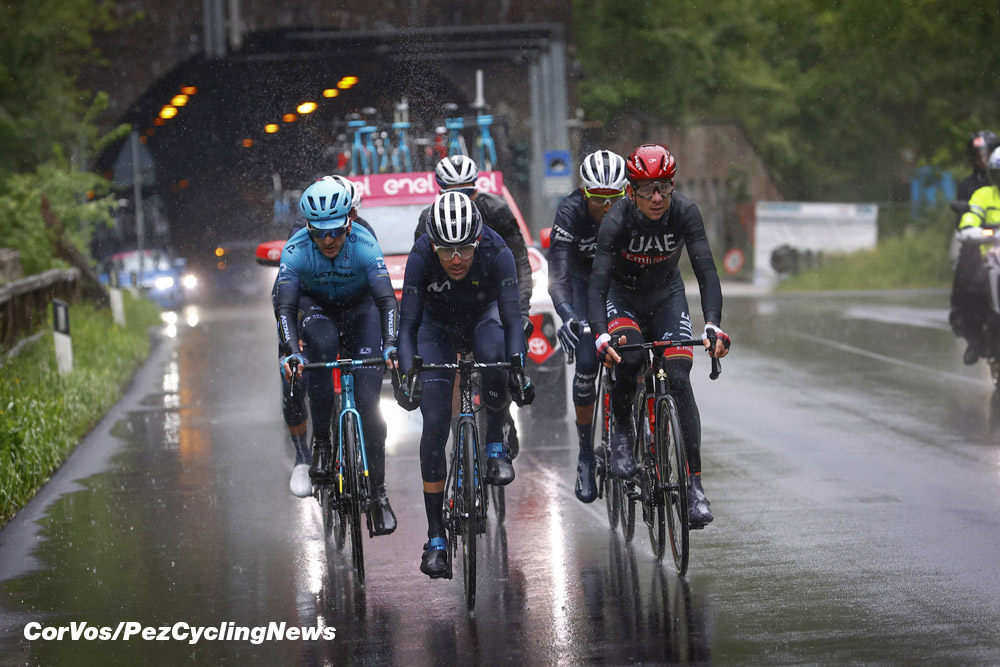 In the peloton, INEOS Grenadiers took up the chase. The pink jersey team gave the six escapees a maximum lead of 5:30. More than 50 kilometres before the finish, the pursuers were caught, after which EF Education-Nippo also put men at the head of the pack. 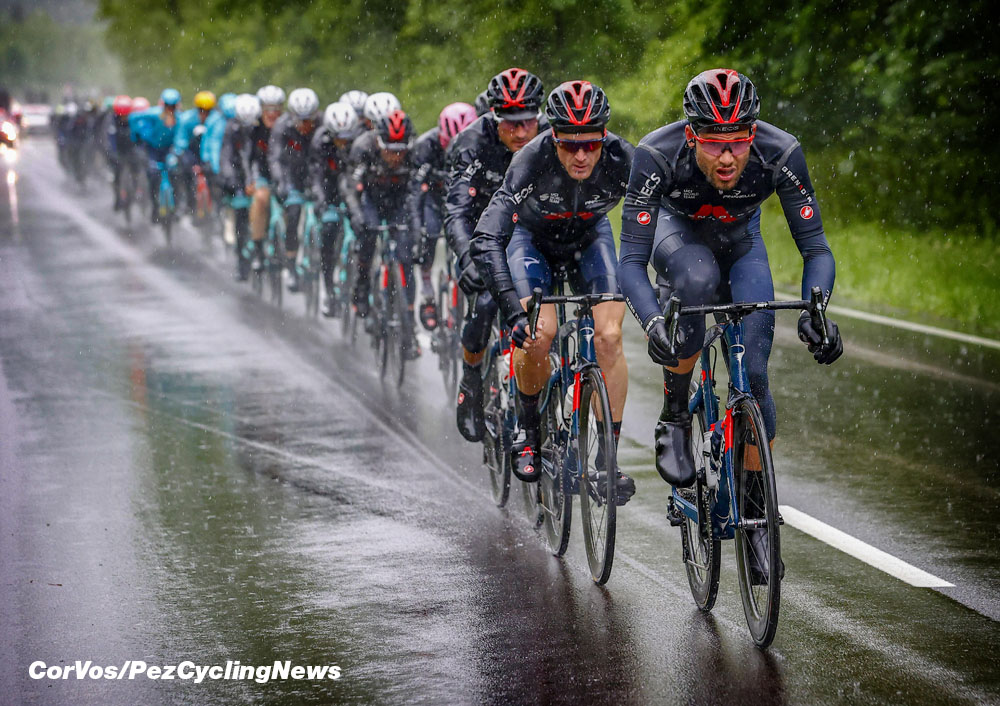 INEOS Grenadiers on the chase

João Almeida was the best placed of the six leaders. The Portuguese rider was 8:32 down on the pink jersey. Formolo, at 9:52, was also a threat to the top 10. Before the Passo Giau, there was the non-categorised Colle Santa Lucia, 7.5 kilometers at over 7%. 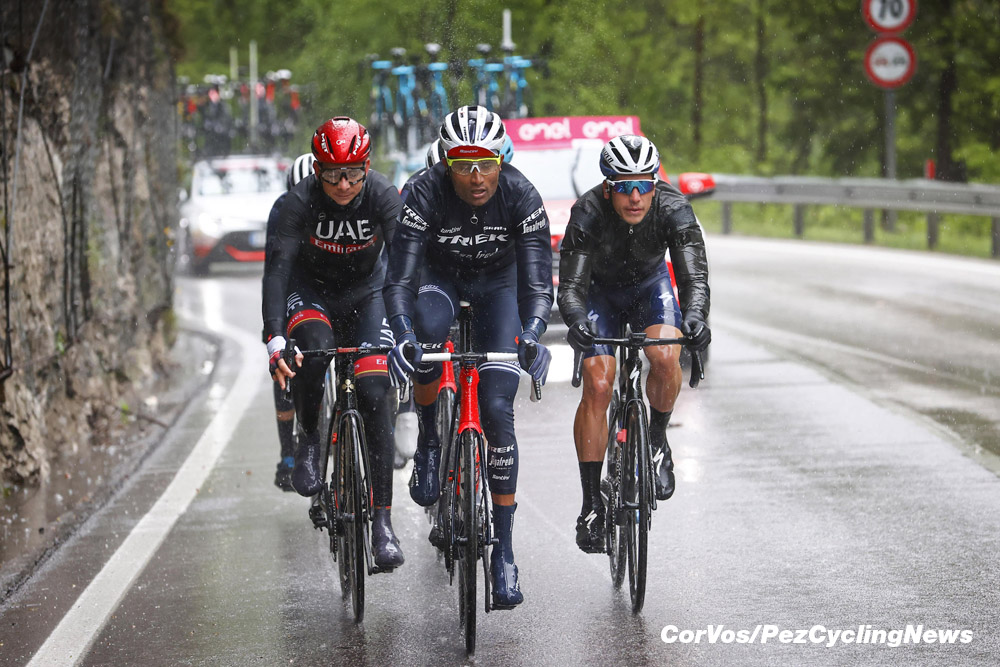 There, Ghebreigzabhier rode full gas for Nibali, but he could not prevent the considerably thinned peloton from getting closer. The pace of Carthy’s men on that climb turned out to be too high for Remco Evenepoel and he lost a few minutes there. 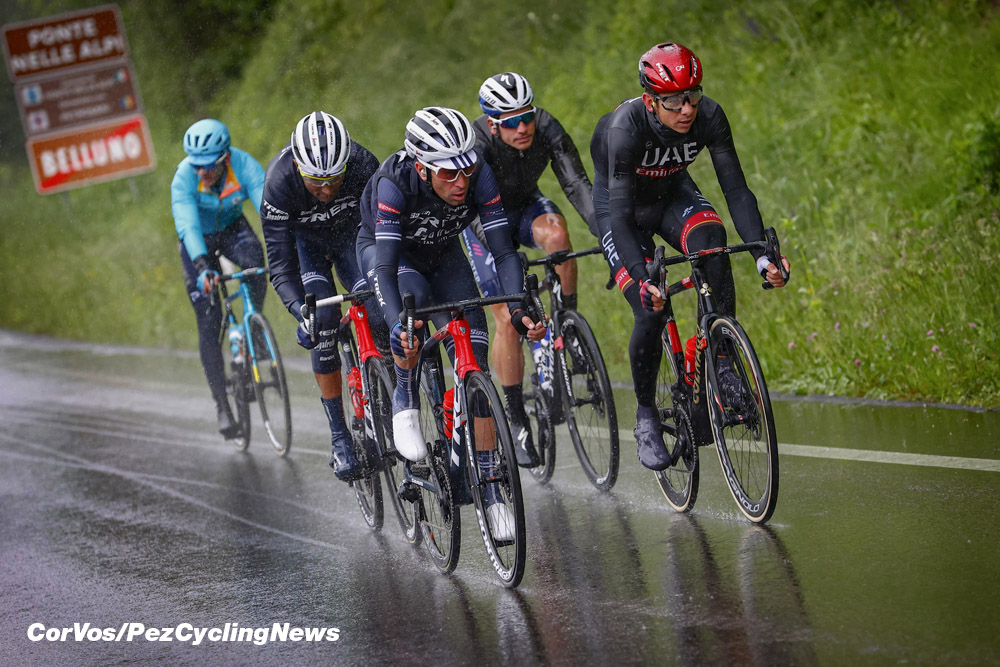 Due to the work of Alberto Bettiol, the difference to the five remaining escapees (Almeida, Formolo, Nibali, Pedrero and Izagirre) dropped to under 2 minutes. At the foot of the Passo Giau the gap was 1:50. After a near-crash in a short descent, Gorka Izagirre disappeared from the front, while Formolo and Pedrero rode away. The Spaniard turned out to be the best climber of the attackers, although Almeida wasn’t far behind. 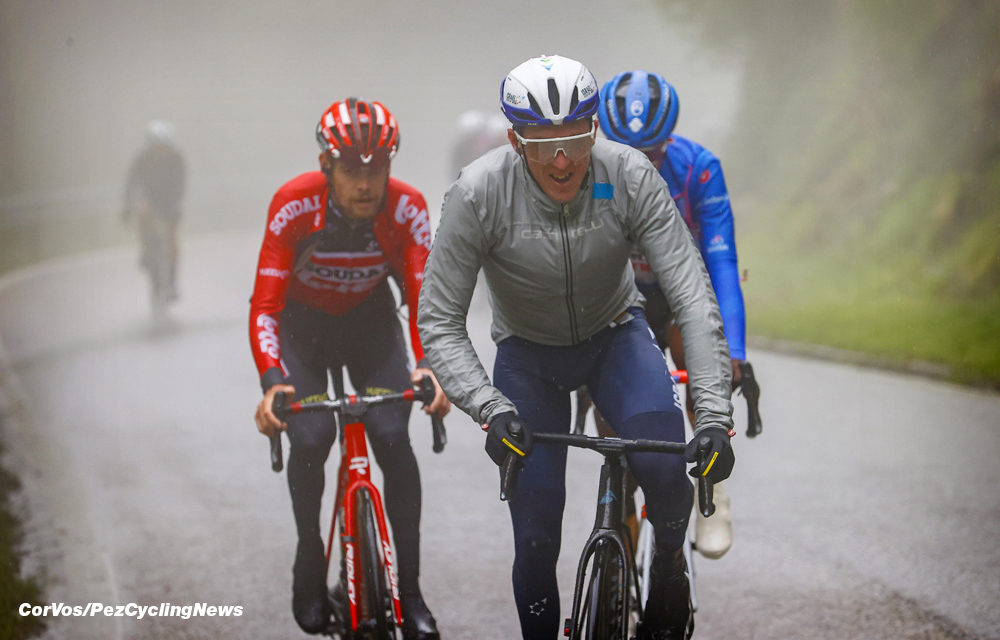 Dan Martin (Israel Start-Up Nation) was in the break

In the favourites group, there was bad luck for Aleksandr Vlasov, who got into trouble taking off his raincoat and had to chase. He was not the only one to be dropped. Simon Carr was able to thin out the chase group considerably for Carthy. Only Carthy, Bernal, Damiano Caruso, Giulio Ciccone, Daniel Felipe Mártinez and Romain Bardet could follow. Simon Yates was only just hanging on. 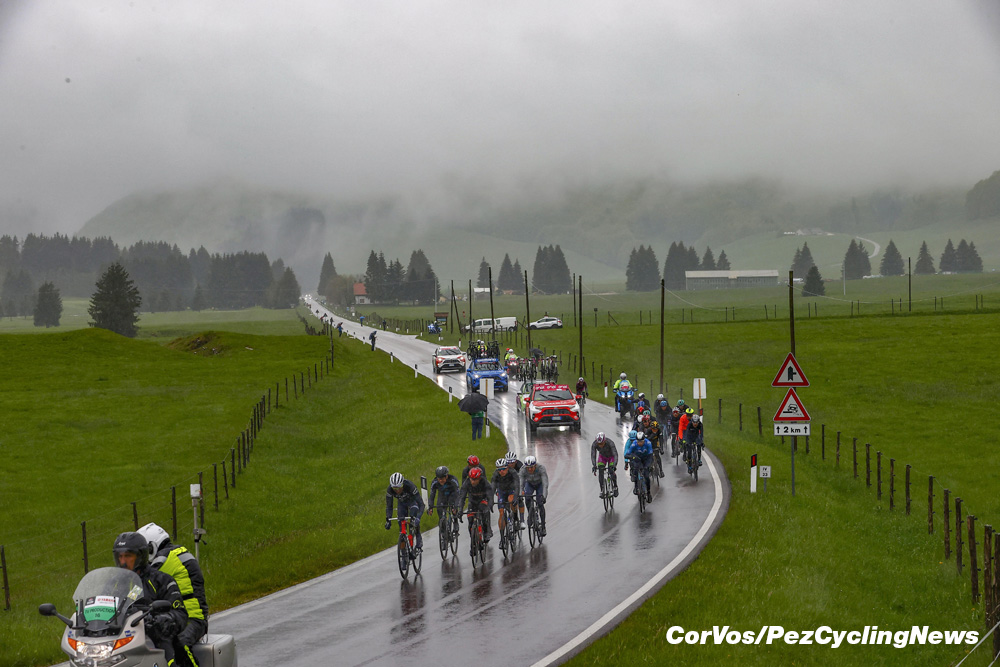 An attack by Egan Bernal 4 kilometres from the top caused the group of top men to explode. The maglia rosa left all his competitors and went past the last of the early break in no time. Caruso followed at 20 seconds and Bardet at 30. Behind them, Carthy and Ciccone followed, with another group including Yates and Vlasov at 1 minute from Bernal. 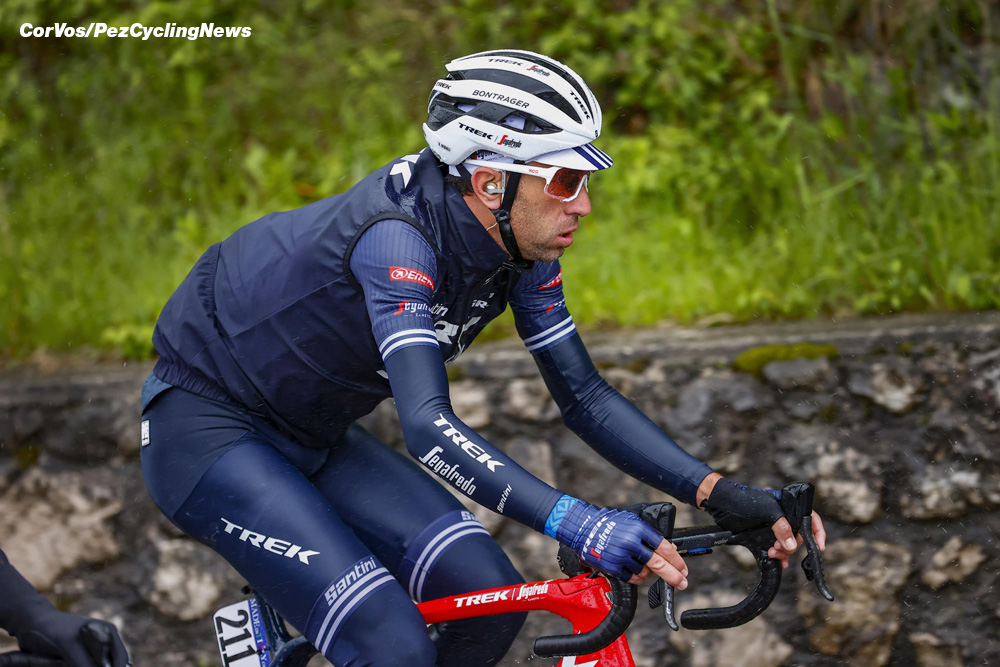 The ‘Shark’ looked good… for a while

But it was the Colombian who put the finishing touches on the top of the Passo Giau, the highest point of this Giro, with 50 KOM points. Bernal was also the first to start the technical and misty descent to Cortina d’Ampezzo. He put Caruso and the rapid Bardet at just under 45 seconds. The group of Ciccone and Carthy followed at about a minute and a half, while Yates and Vlasov lost more than 2 minutes. 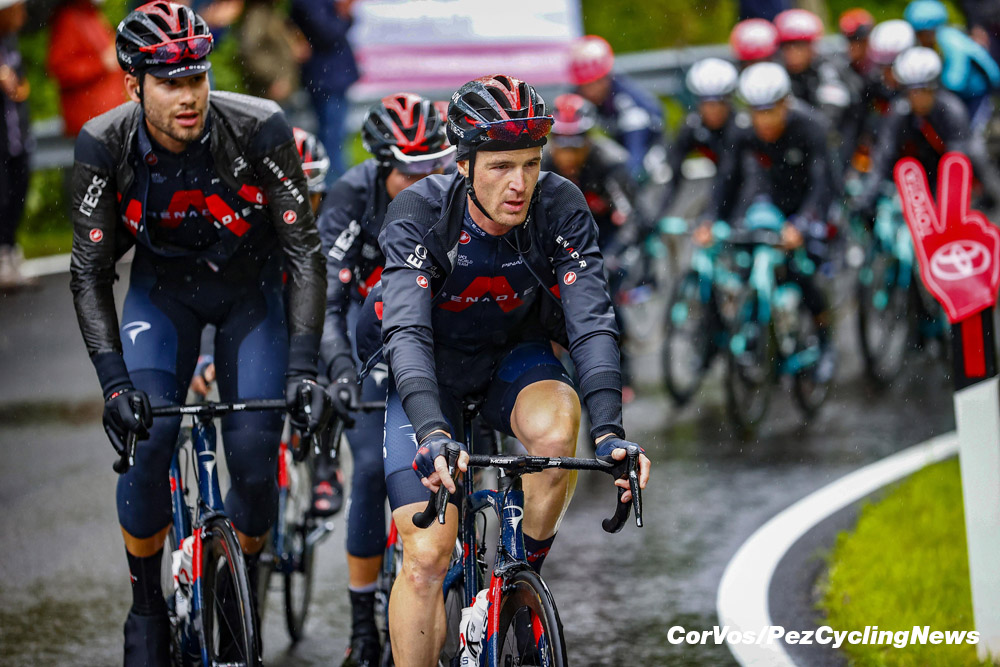 INEOS doing what they do best

In the final towards Cortina d’Ampezzo, Caruso and Bardet got together. As a result, they came to within 30 seconds of Bernal, who convincingly took the stage victory. The Colombian had time to take off his rainjacket to show the pink jersey at the finish line. Caruso and Bardet crossed the finish line 27 seconds later. A group with Almeida, Carthy and Ciccone followed at 1:18, while Vlasov lost 2:11. Tobias Foss crossed the line at 2:30 with Formolo, followed shortly by Yates. 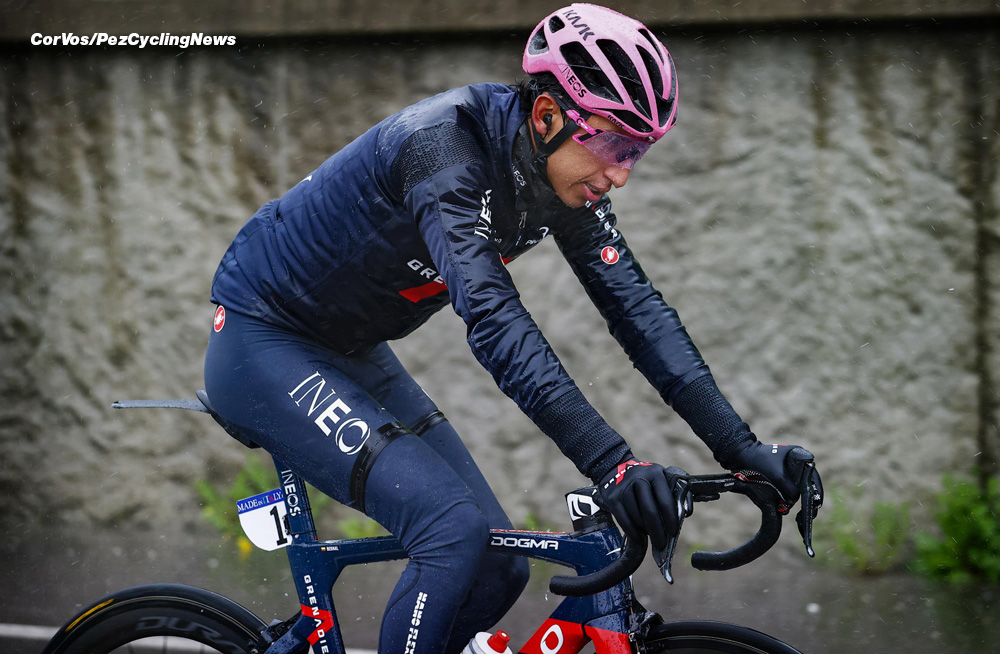 Behind that, the differences were even greater. At the top of the overall, there was a lot of damage to Yates, who dropped to fourth place. Caruso is the new second placed, at 2:24 from the pink jersey. Carthy is now third at 3:40, while Bardet is seventh, Foss, ninth and Almeida in tenth. Remco Evenepoel lost 24 minutes and is now nineteenth. 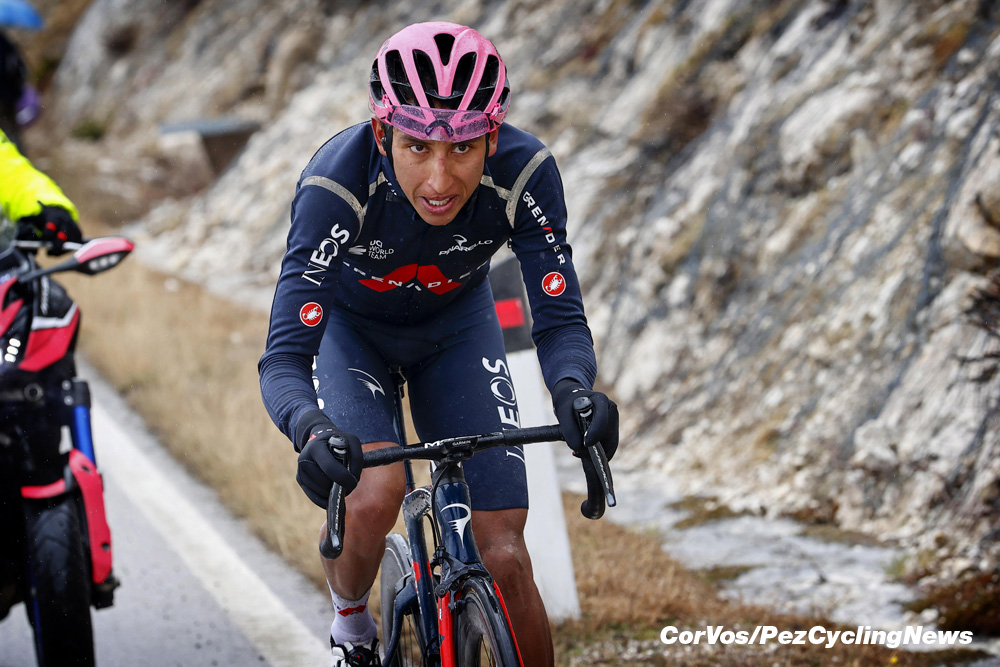 No live TV, but Bernal was going solo 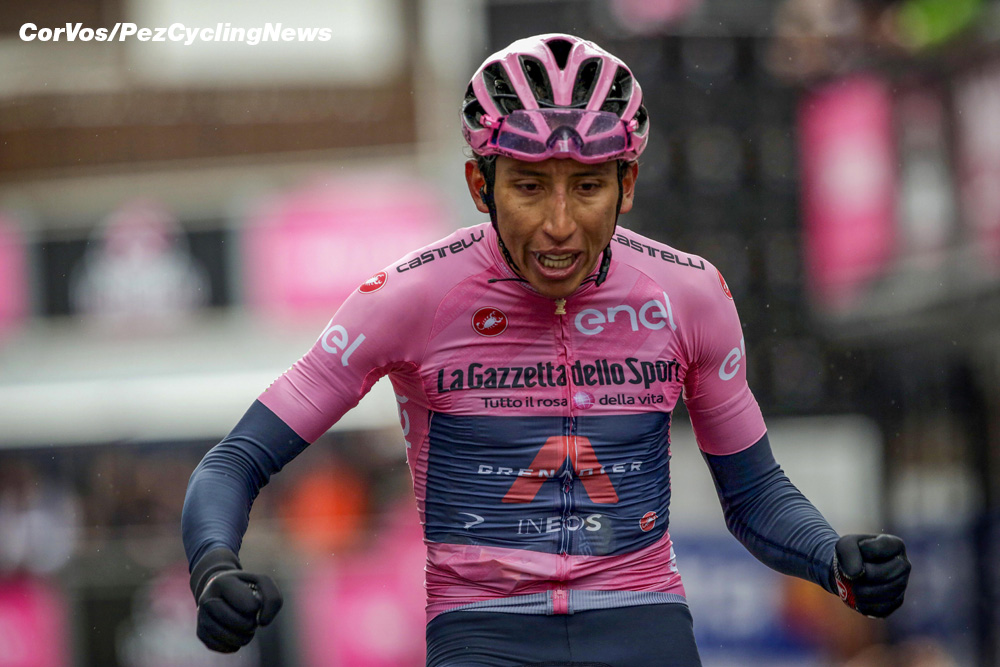 A hard but productive day for Bernal 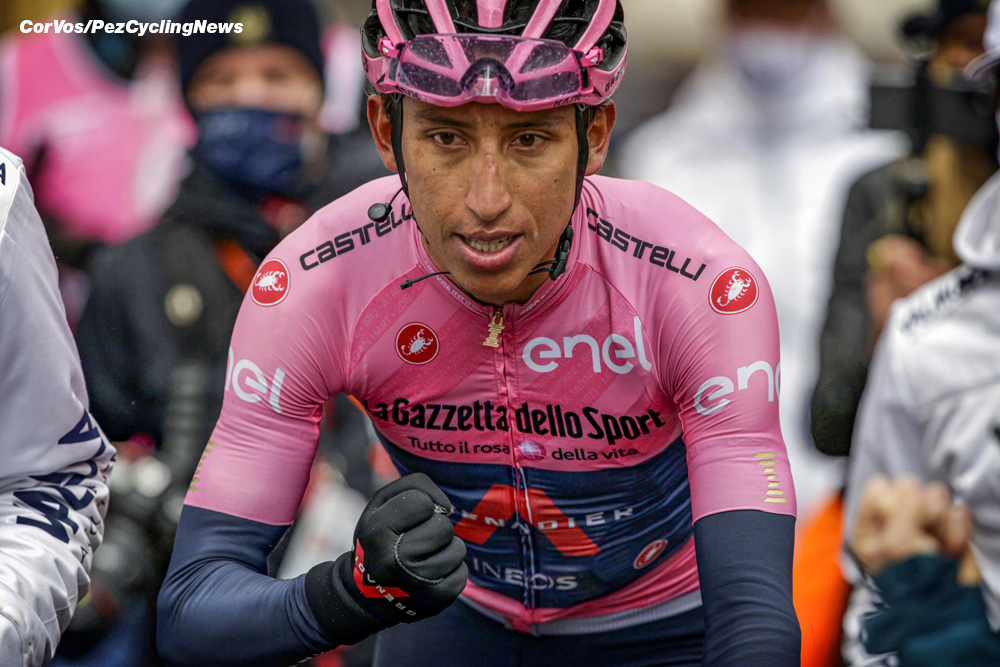 Stage winner and Maglia Rosa, Egan Bernal (INEOS Grenadiers): “This is a great victory, winning wearing the Maglia Rosa is special and I wanted to show it. Today I wanted to do something special, to show I am back in the game. It was a hard stage also because of the weather, but I had the right mentality from the beginning of the stage. I was ready to suffer and we did it. I’m super happy!” 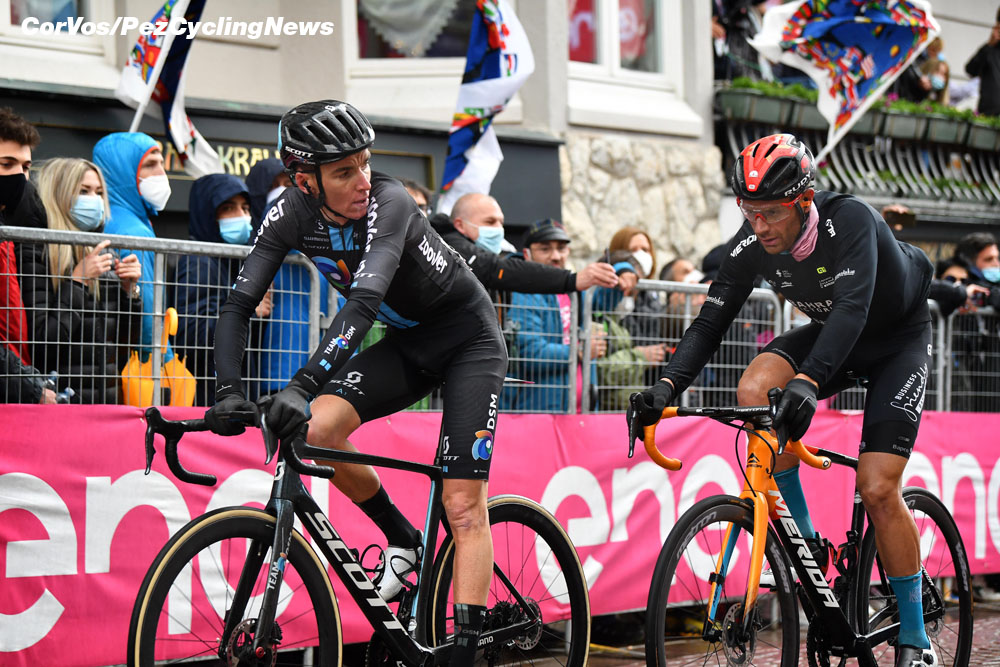