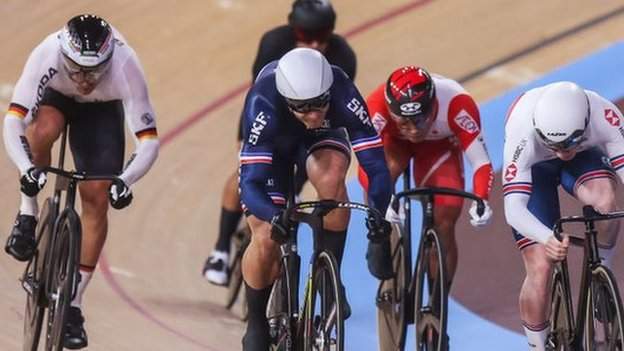 Next month’s European Track Championships have been cancelled as a result of the ongoing political situation in Belarus.

The five-day championships were scheduled to start on 23 June in Minsk.

On Sunday, Belarus scrambled a warplane to force a passenger plane to land in Minsk in order to arrest a journalist.

Enrico Della Casa, president of the European Cycling Union (UEC), said the organisation was now looking for another venue.

“We have recently been monitoring the situation with the Belarus Cycling Federation, which has now developed into an international debate, and today during the management board meeting, we have decided to cancel the event in Minsk,” he said.

“We are already working on finding an alternative solution to enable the riders from our 50 National Federations to compete in this season’s continental event.”

Stephen Park, performance director for British Cycling, said that while it was sad to lose another race from “an already disrupted calendar”, he is in favour of the UEC’s decision.

“We will support the UEC with finding another venue for the European Championships,” Park said. “But we have a responsibility to act in the best interests of the riders and the team as a whole.

“The constantly changing Covid restrictions on an international level have created additional logistical and financial challenges for every National Federation, therefore we need to be realistic about what is possible and practical before Tokyo.

“While we work hard to create race opportunities for our riders, our focus needs to be on ensuring the team are excellently prepared for the Olympic and Paralympic Games.”

Germany withdrew from the championships on Tuesday after the German cycling federation said it viewed the situation in Belarus “very critically”.

Minsk had already been stripped of co-host status with Riga in Latvia for ice hockey’s World Championship this month, in response to a crackdown on anti-government protesters in Belarus and concerns about coronavirus.