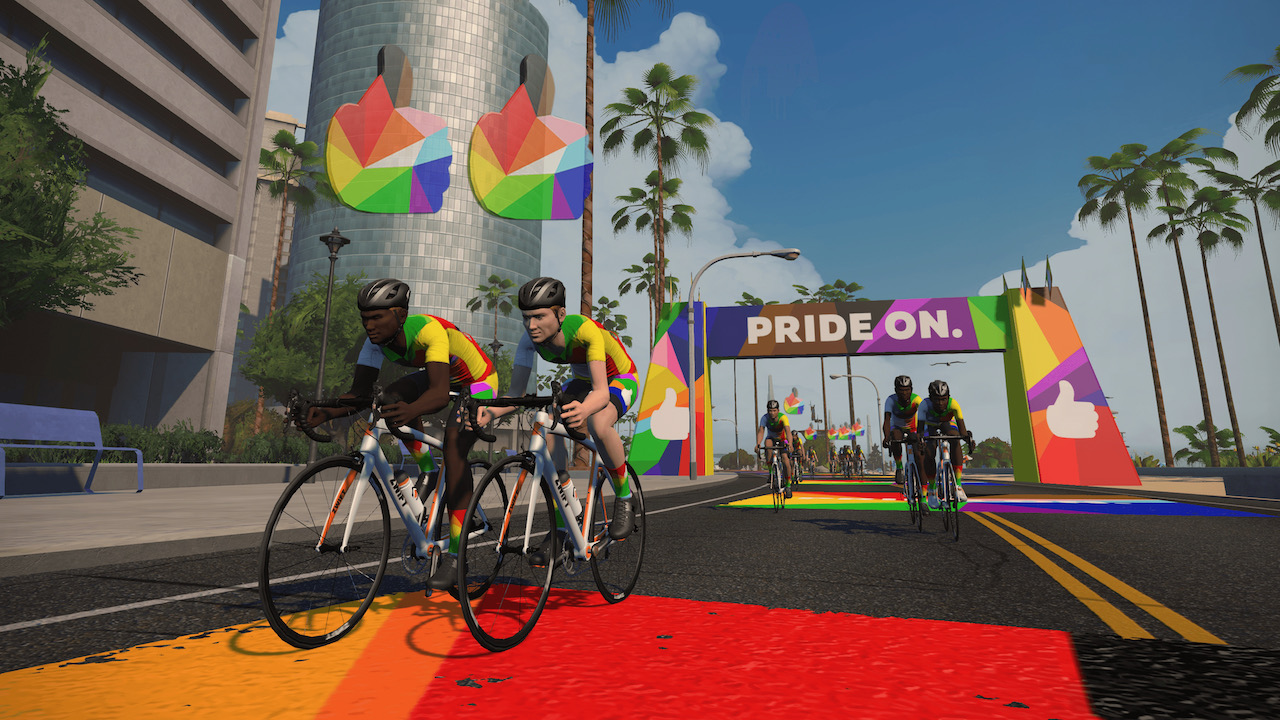 The team over at Zwift has been busy cooking up all kinds of fabulous updates, inclusive rides, and new worlds for users to explore. Here are the coolest and newest happenings in the Zwift world.

June is Pride Month, and to help celebrate the LGBTQIA+ community Zwift has again partnered with Athlete Ally and a series of sponsored events and rides. This marks the third year of the partnership in which Zwift and Athlete Ally advocate for equal access in sport.

The events for Pride On will run the entire month of June except for Sundays, with key events across the calendar. Special ride and run leaders like American Triathlete, Duathlon powerhouse Chris Mosier, Olympian Lea Davidson, and many others will be along to keep users motivated and celebrate.

On Sunday, June 13th, there will rides throughout the day in dedication to TogetheRIDE produced by AIDS/Lifecycle. The events will honor the 1.2 million people in the US living with HIV. The idea behind TogetheRIDE is to motivate users to collectively move 1.2 million miles to raise awareness, and fundraise with a goal of $5 million and underline the fight against AIDS.

So if you need some motivation to ride a little extra in June — here it is!

Now you can be a part of sporting history and ride alongside Olympians and the Zwift Virtual Cycling Series. The Union Cycliste Internationale (UCI), International Olympic Committee (IOC), and Zwift have reached a monumental agreement. They plan to have a complete series of cycling events for the Olympic Virtual Series, scheduled to run June 1-27 — Register here.

The events will focus on mass participation and look to include something for every manor of cyclists. The rides will offer a social experience, launched alongside special podcasts and group workouts with past tons of past Olympians including Nino Schurter and Sir Chris Hoy.

If you’re looking to test your form against the best in the world, Chase Races will offer riders of all fitness levels the chance to compete against one another. The Chase Race is just that — cross the line before getting caught, but with a featured Olympian on the start sheet — it could be more challenging than ever. If you’re looking to watch all the action you’ll be able to watch the event here.

The IOC and the UCI offer new Zwifters complimentary access to the Zwift platform throughout the Olympic Virtual Series (1st – 27th June). Get your free access codes by registering on the UCI Website here.

Save the lost generation with TRINITY.

Are you a Junior or U24 racer, bummed about canceled races, and have been waiting all year to show the world what you got? Now’s your chance. Zwift will play host to the TRINITY Racing Lost Generation Series starting June 17th.

The new race league is designed to help young riders showcase their talents and take them to the next level in their cycling careers.

The Lost Generation TRINITY Racing Series will run over four weeks and is comprised of five one-day races and a five-day stage race in the final fourth week. The series is open to U24 and Junior Boys and Girls and looks to replicate the load of a young professional rider.

If you have a young one in your family that’s ahead of the pack, send them over to Trinityracing.co.uk for all the details on registration and rules.