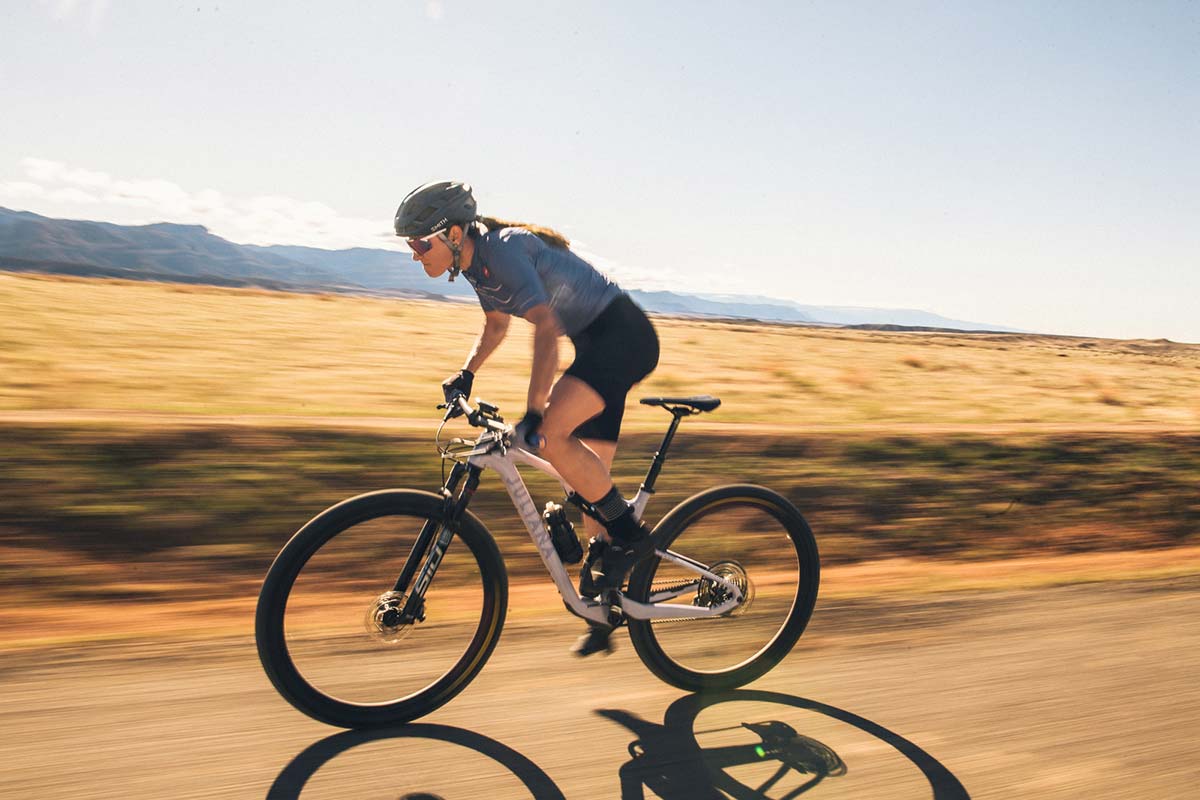 Rolling out alongside the 2022 Santa Cruz Blur is the women’s specific version; the Juliana Wilder. Whereas the Blur is available in a true 100mm travel XC configuration and a 115mm travel Trail bike, the Wilder is available only in that latter Trail format.

Rolling on 29″ wheels, that 115mm travel is serviced by their new Superlight suspension platform that leans on flexible carbon stays to achieve the desired leverage curve. For the full tech breakdown on the Santa Cruz Blur and Juliana Wilder frames, see Tyler’s coverage. Here, we share details on the Wilder only, covering frame details, geometry, and pricing.

The all-new Juliana Wilder is their shortest travel, lightest women’s full suspension mountain bike yet. It sits at the XC and Short Travel Trail Bike end of the lineup, just above the 120mm travel Joplin.

The Juliana Wilder is available in sizes S, M and L, with reach figures spanning a 412mm to 458mm range. Seat tubes are pretty short, on the small and medium frames at least, allowing riders who find themselves between sizes to select their frame based on their preferred reach.

The head tube angle comes in at 67.1°, considerably slacker than the 69° we see on the 2019 Santa Cruz Blur (which the new Blur and Wilder bikes evolved from). That tells you something about the bike’s intentions; this one is designed to be pretty capable on the descents as well as rocket up the climbs. That’s paired with a slack 75° seat tube angle.

The Wilder is the first of Juliana’s mountain bikes to get size specific chainstays throughout the S-L size range, ensuring every rider, no matter their height, gets the very same ride feel. This proportional approach to frame design is something we are seeing more and more of, as brands balance the cost-to-benefit ratio in its favor.

Depending on which model of the Juliana Wilder you go for (there are five to choose from), you will end up with one of two types of carbon frame; C or CC. The former is the heaviest, cheaper option seen on the less expensive builds. The CC is slightly lighter, but retains the same strength and stiffness as the C. It is costly, as you might imagine. Both come with Juliana’s lifetime warranty, as standard.

What’s pretty awesome about the Wilder is the fact that you can fit two water bottles inside the front triangle, and another on the underside of the downtube. That’s thanks to the space-savvy layout of the minimalist VPP suspension platform.

Cable routing is internal, fully guided throughout. The downtube and drive side chainstay and seat stay get molded rubber protection to protect against chain slap and rock strikes.

The all-new Juliana Wilder is available at five price points. At the budget end of the spectrum is the Juliana Wilder C R TR, priced at $4,599. That hard-earned cash gets you their lower-end, heavier carbon frame built up with a Fox Float Performance DPS shock and RockShox SID RL fork. It is driven by the SRAM NX Eagle 12-speed drivetrain, rolls on a RaceFace alloy wheelset, and is slowed down by SRAM Level T brakes.

At the top-end lies the Juliana Wilder CC XO1 AXS TR RSV (woah, that’s a mouthful), retailing at $9,449. This one gets the lighter CC carbon layup with Fox Float Factory DPS shock and Fox 34 Factory Step Cast fork. It rolls on the recently released Reserve 28 carbon wheelset. Lastly, it gets a full electronic shift drivetrain in the form of the SRAM 12 speed AXS group with 10-50T cassette, and SRAM Level TLM brakes.

There are three other models that sit between those to suit other budgets, retailing at $5,499, $6,449 and $7,649. Head to the Juliana Bicycles website for full information on build specs.