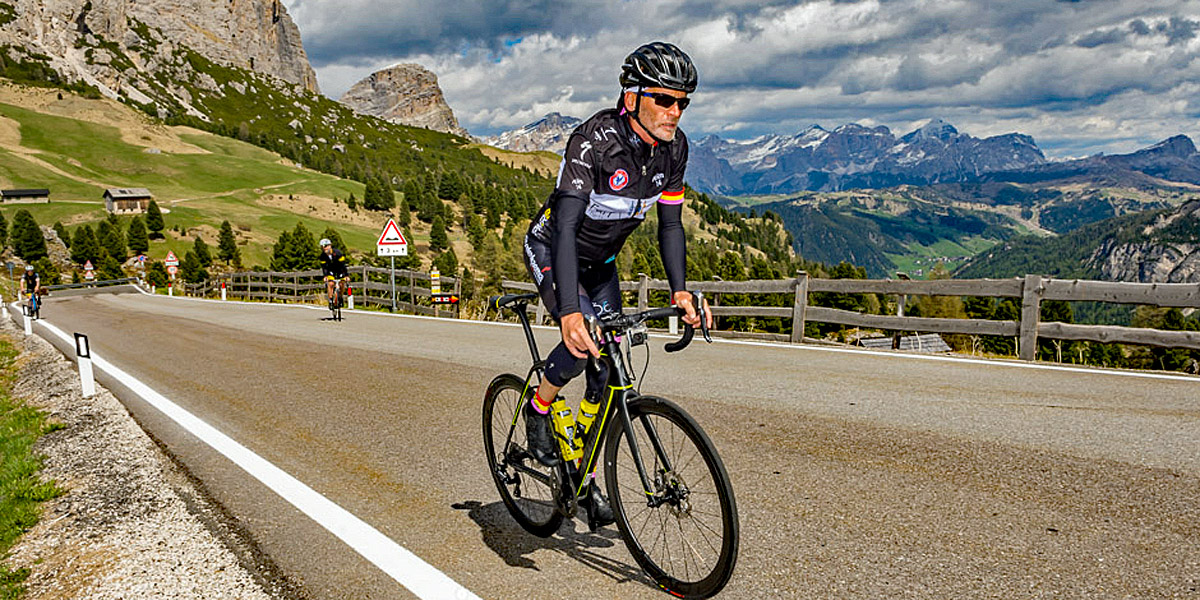 Geoff Thomas Interview: Ex England international footballer, Geoff Thomas, is a leukaemia survivor and has turned his hand to cycling. Not just a ‘bit of a bike ride’ but the full Tour de France course, and all for charity. Ed Hood caught up with Geoff to hear all about it. 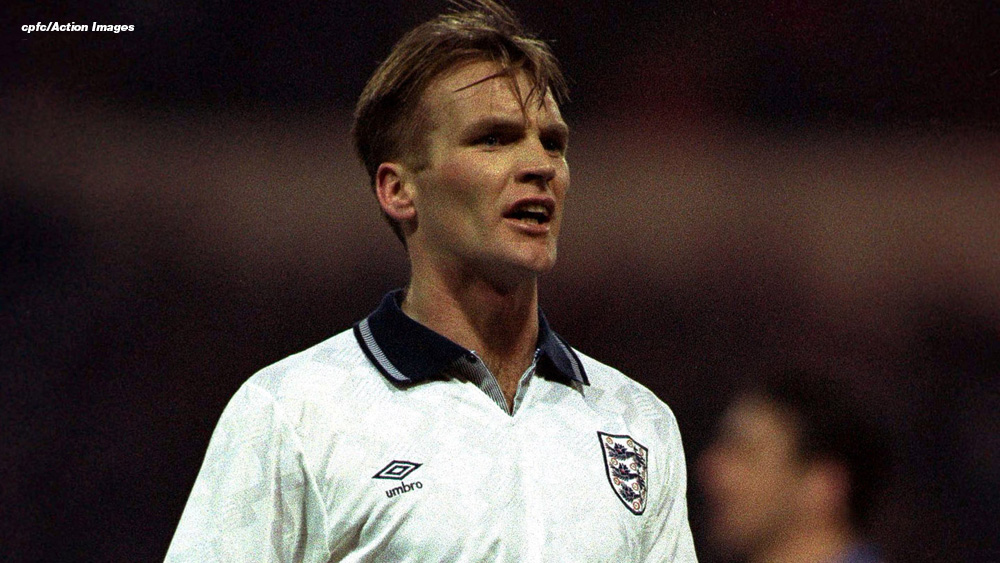 Geoff Thomas in an England shirt

You’ve just recovered from a potentially deadly illness and need a challenge; perhaps run a marathon? No, that would be too obvious and besides, that’s only 26 miles. Cycling looks like it may provide good opportunities to test oneself, so perhaps a ‘century’ ride? No, not extreme enough – maybe Paris-London then? Or, how about the entire parcours of the Tour de France – this year that will be 3,384 kilometres?

After English star soccer player, Geoff Thomas recovered from a life threatening battle with leukaemia that was the goal he set himself. But it wasn’t just a personal challenge, his effort was to draw attention to and raise funds in the fight against, blood cancer in his role as ‘Cure Leukaemia Patron.’ This year will be his fifth and final ‘Grande Boucle.’ We caught up with Geoff as his ‘Grand Depart’ looms on June 19th, one week in advance of the actual Tour de France. 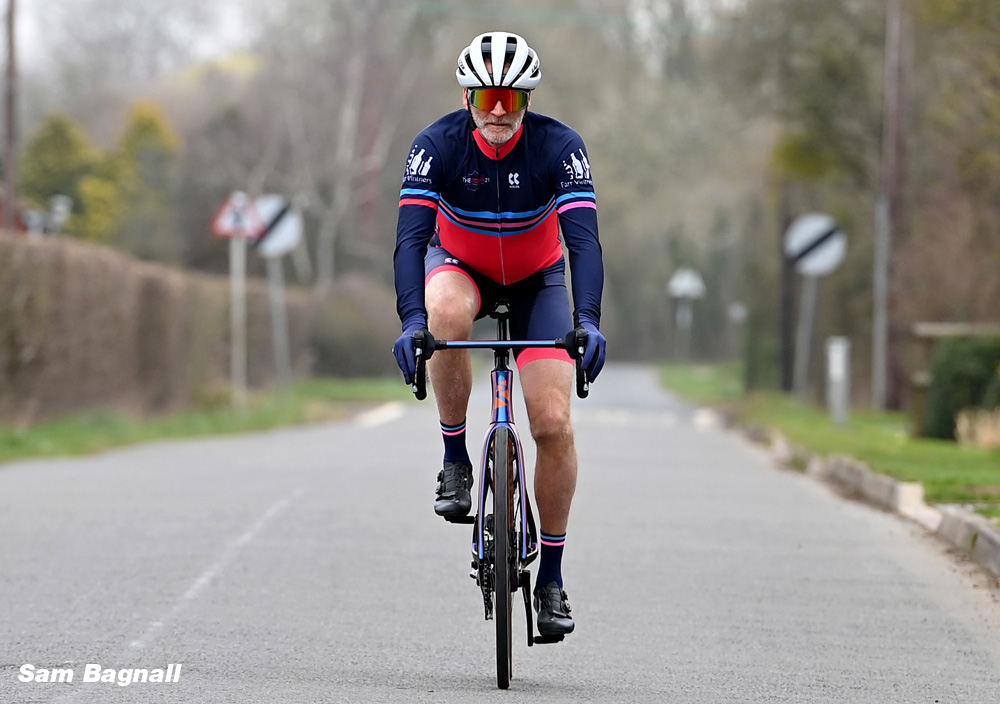 PEZ: For soccer Philistines like myself Geoff, please tell us a little about your career.
Geoff Thomas: I came late to the sport, beginning my career at 19 years-of-age with a team called Crewe Alexandra FC in Cheshire, I was there for two-and-a-half seasons, appearing for them 137 times. But I’m perhaps best known for my time with the South London club, Crystal Palace FC where I was for six years and made 249 appearances. Palace made the FA Cup final in 1990 against Manchester United, we drew 3-3 with them but lost the replay. I was capped nine times for England and played professionally for 19 years.

PEZ: When were you diagnosed with leukaemia?
On July 4th 2003, I’d been retired from the game for eight months, I was diagnosed with chronic myeloid leukaemia, a form of blood cancer, and given just three months to live. After a stem cell transplant from my sister Kay and treatment from Professor Charlie Craddock CBE, the co-founder of blood cancer charity ‘Cure Leukaemia,’ I entered remission from the disease in January 2005. 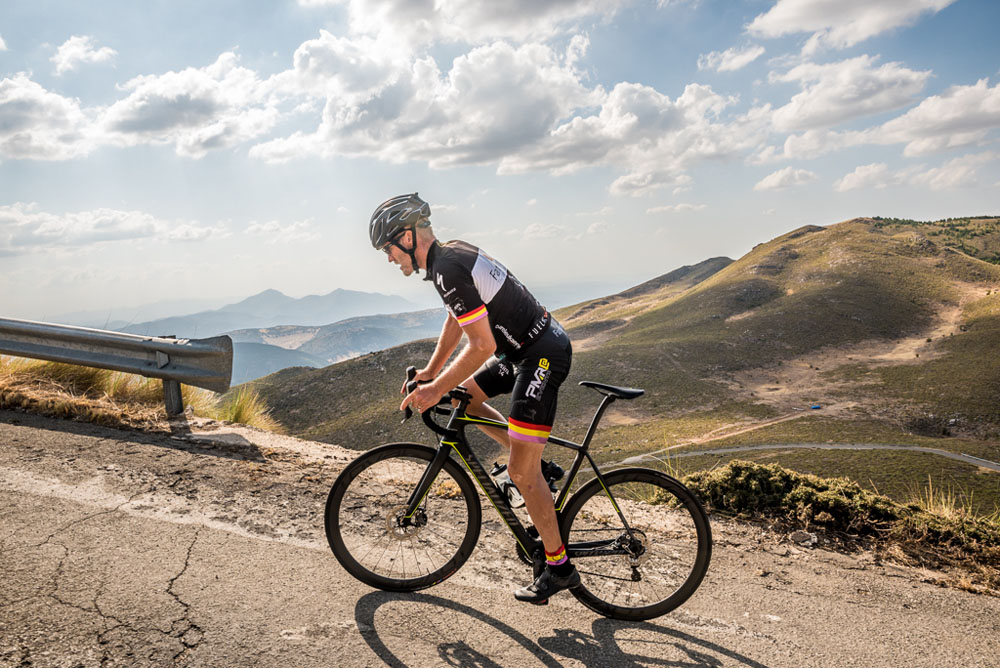 PEZ: Why le Tour?
I spent two years on chemo and radio therapy, dark days, but I began to read books about the history of cycle sport, they were inspiring, I came to realise what a wonderful, tough and demanding sport it was. I decided that whatever challenge I set myself, it had to be extreme to honour the efforts of Professor Craddock, who saved my life. Cycling is the most arduous of professional sports and the Tour de France the pinnacle of the sport so in February 2005 I decided that was what I was going to do; ride all 21 stages, in advance of the race.

PEZ: The first bike rides?
Horrendous! The first rides were only five or six miles but I was wrecked when I got back from them, my wife, who’s been through a lot with me, just looked at me, shook her head and ‘tutted.’ But five months later, I did it – some days I was in the saddle 12 or 13 hours but I completed the course. 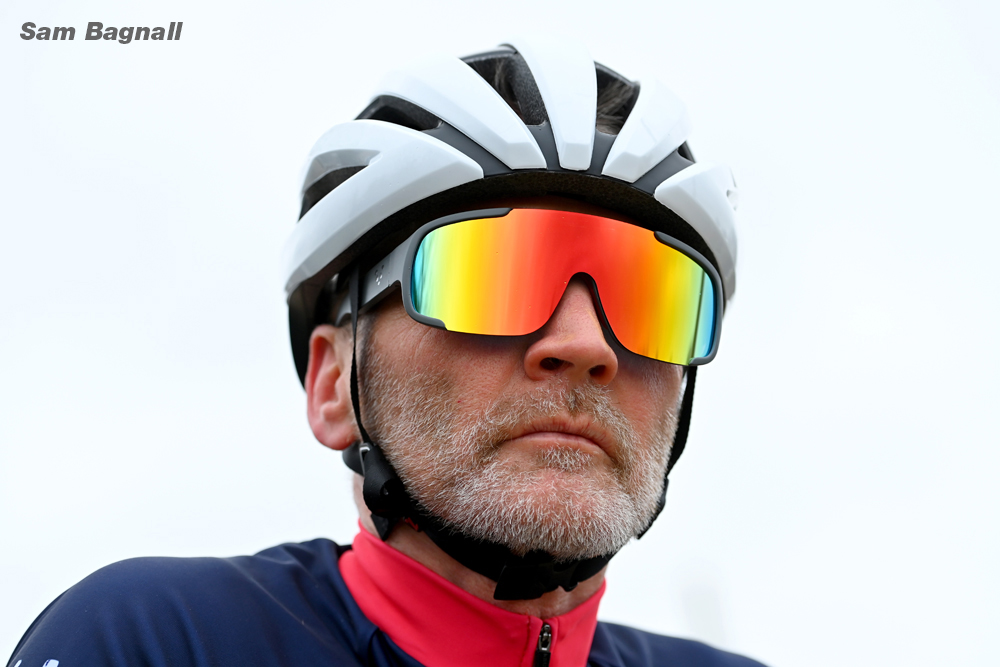 PEZ: Did you have a coach?
This will be the first time I’ve had that luxury; Steve Faulkner who’s an exercise physiologist, sports engineer, cycling scientist, triathlete, and cancer beater is on the ride and has been advising me. It’s really the first time I’ve taken advice on training and preparation.

PEZ: Have you had a ‘bike fit?’
I’ve done the ‘plumb line from the knee’ thing but nothing scientific albeit I hope to do a professional bike fit when I get my new machine. Pinarello very kindly offered me a machine at a very generous discount but it was still an awful lot of money and I being honest, I’m not sure I could do a machine like that justice. I’m actually going to be riding a Ribble bike, I have a very good relationship with the company’s owner, Andy Smallwood and I think it’s a good ‘fit’ to be riding an English bike. 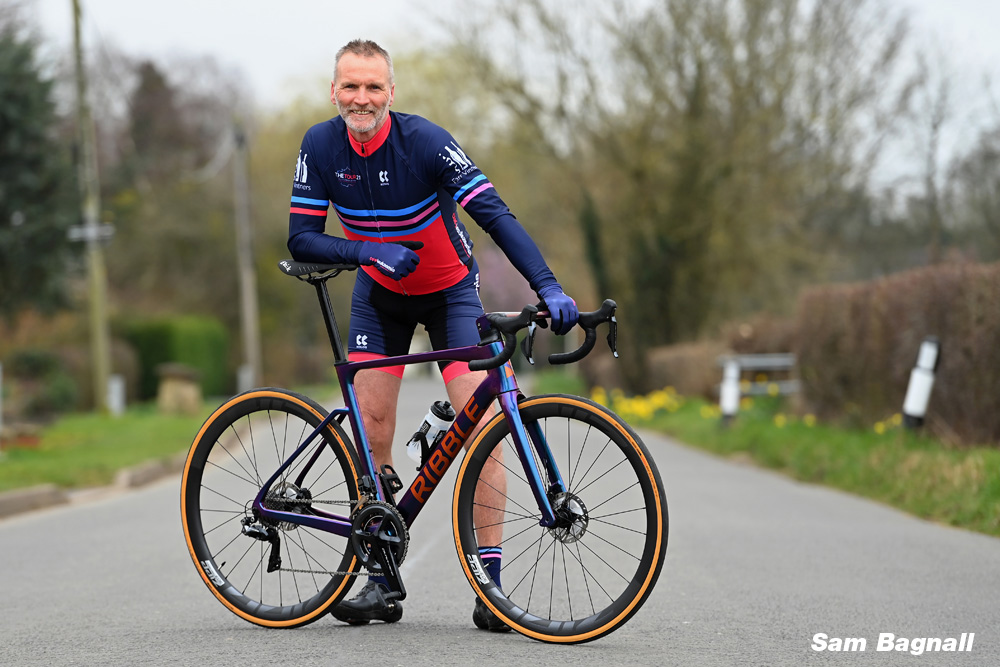 PEZ: The 23 guys and one lady accompanying you, how are they selected?
They have each to raise £30,000 in sponsorship, which goes to the charity, but we aim to give them the best possible experience, some have already reached or exceeded that amount. And whilst it’s about raising awareness and funds we want to give our riders a memorable participation – having the support of our own team bus plays it’s part in doing that. We may be amateur cyclists but when the bus with all of our sponsors names on it appears in the Tour de France stage towns in advance of the actual race it generates a lot of attention which is obviously motivational for our riders.

PEZ: Are the Tour organisers, ASO supportive?
Yes, we have an association with them, that’s largely due to the efforts of Andy Cook, I’ve known him since 2006, he was with British Cycling and is a terrific organiser – he has his own coaching business and organises cycling training camps in addition to the assistance he gives us. 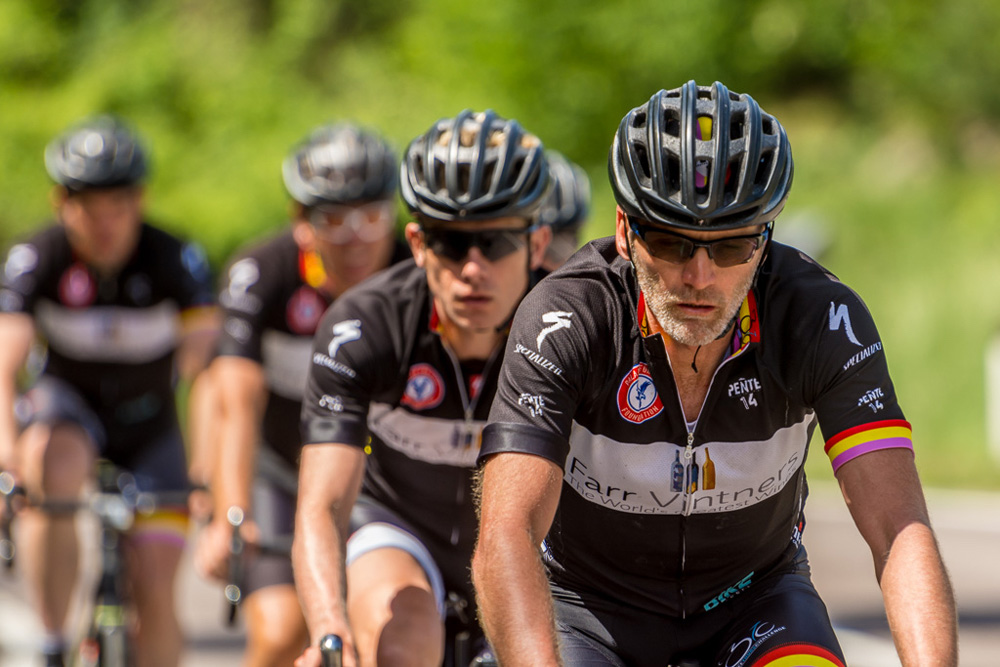 PEZ: What if someone had has a ‘jour sans’ as the French say – ‘a bad day?’
Everyone has one on a 21 day ride over some of the hardest climbs in Europe and it’s not possible to have 25 people all at the same level of ability and fitness. We gauge everyone’s standard then divide the riders up into three groups of equal abilities, there’s a group leader and everyone is looked after, no one gets left behind, the pace is that of the slowest rider.

PEZ: You enjoy good sponsorship, ‘Panda Optics’ being one that caught my eye.
A lot of that is down to my friend, Neil Ashton who’s founder of Ashton Media Group and has done much to elevate the profile of the charity. As well as attracting sponsors, he’s got us coverage with the Tour de France itself and also with NBC the US broadcasting company – his support has been invaluable. 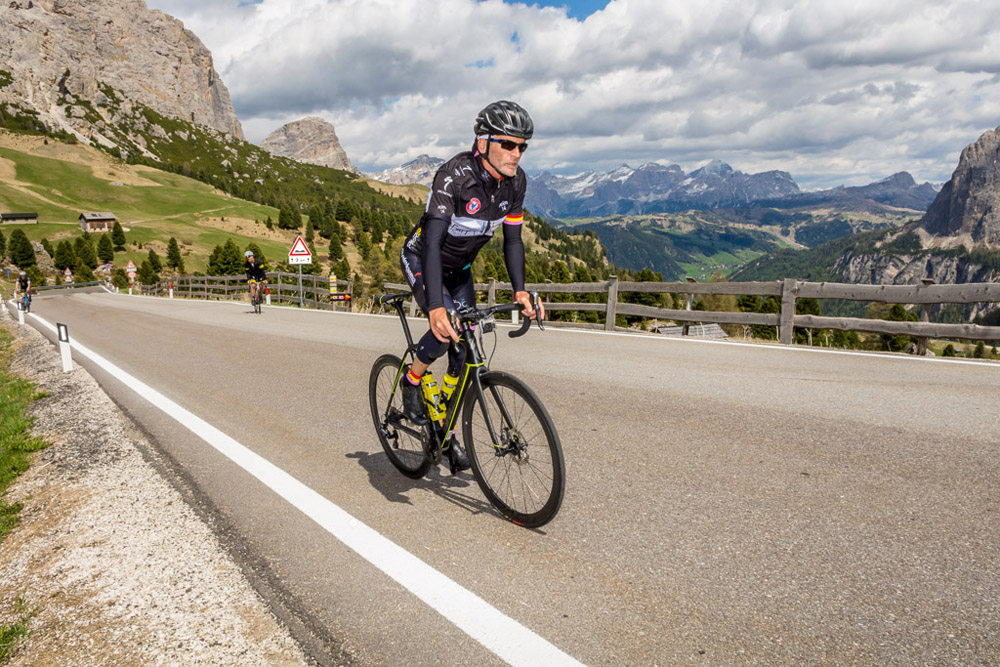 PEZ: Why is this ride your last?
It’s very difficult to keep it going, asking the same people for their help again – and besides, it would be good to have a fresh face so I’m going to let someone else pick up the baton. 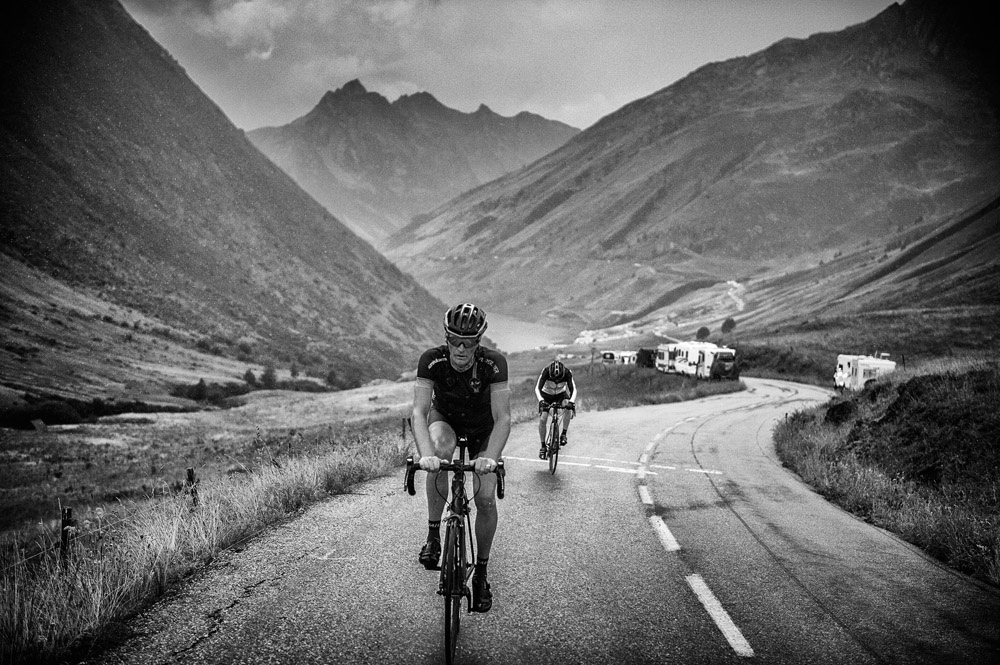 PEZ: And the next challenge is?
Uniting everything, my interests and work in cycling and soccer and carrying on towards what’s now a realistic goal of ending blood cancer.

• See more info and support Geoff at the CureLeukemia website 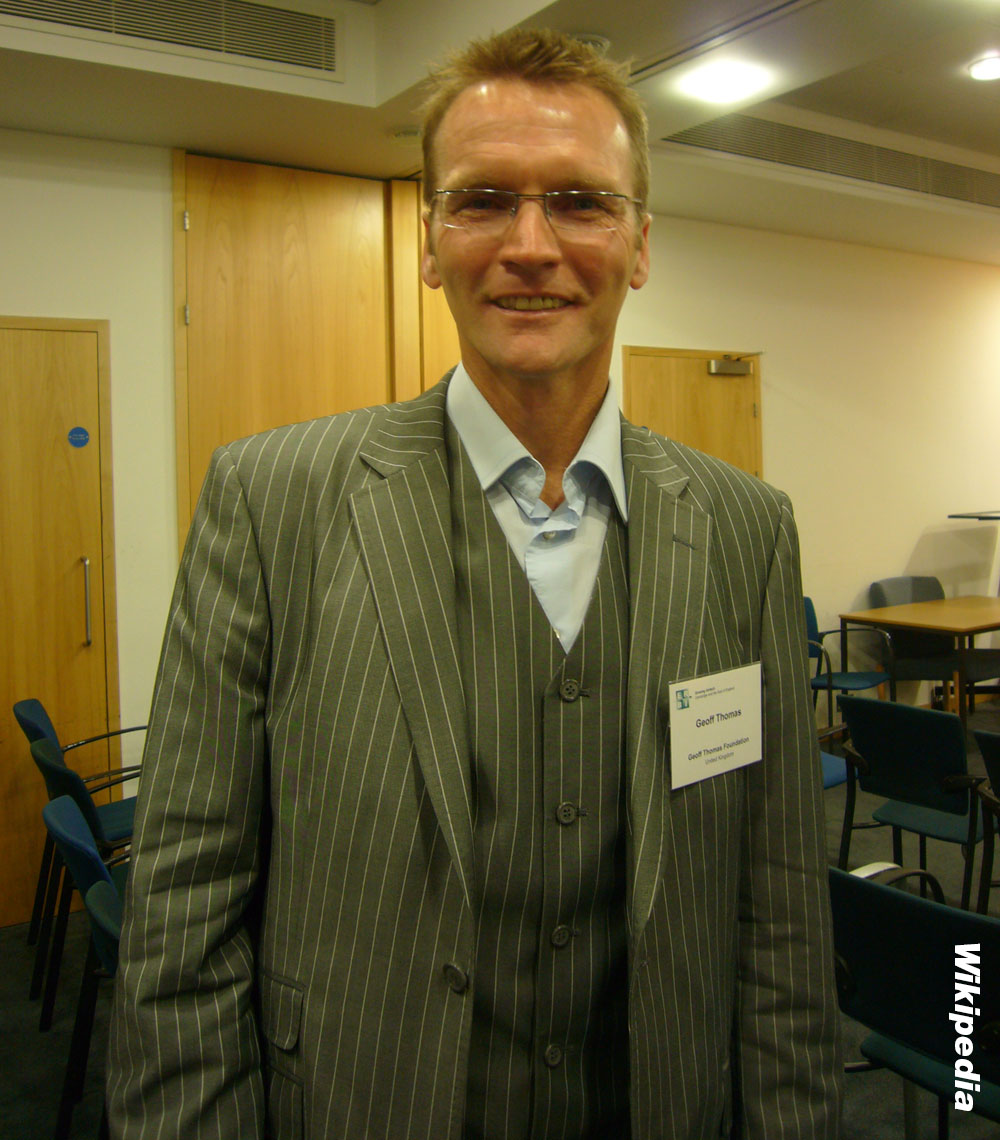