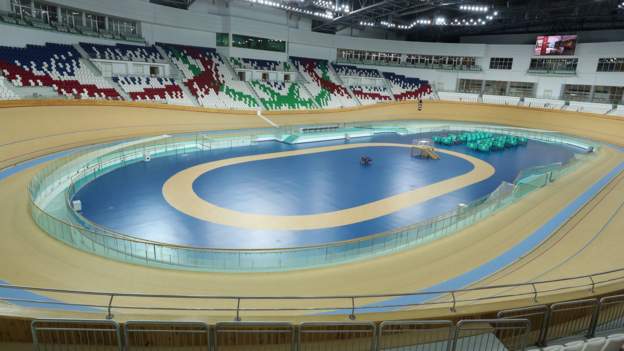 The 2021 Track Cycling World Championships, due to be held in Turkmenistan in October, are to be moved to a new venue.

Governing body the UCI says it is in touch with “several” potential alternative hosts of the event.

It added the decision was taken “at the request of the organisers” because of restrictions linked to coronavirus.

However, the country’s president Gurbanguly Berdimuhamedov says it has not suffered a single Covid-19 case.

In a statement, the UCI said the cancellation was because “health constraints and restrictions linked to the Covid-19 pandemic make it impossible to stage the event in the country”.

The Championships were due to take place in the Turkmen capital of Ashgabat from 13 to 17 October, with the UCI keen to hold the event on the same dates.

It initially announced in a tweet that the event would switch to Glasgow – though that Tweet has since been deleted.

In rare interview with the Russian media earlier this week, president Berdimuhamedov said Turkmenistan had “yet to discover a case of this disease”.

Turkmenistan: The dictatorship with ‘no Covid’

The loss of the World Track Cycling Championships will come as an embarrassment to Turkmen leader Gurbanguly Berdimuhamedov, whose cult of personality is based around prestige projects such as this.

Especially so, as the announcement came as he cycled around Ashgabat to mark World Bicycle Day, accompanied by scores of citizens wearing identical tracksuits, an event given blanket coverage by state-controlled media.

However, it’s unlikely that Turkmen citizens will hear much about the cancellation, as Turkmenistan ranks as the least free media environment in the world, alongside North Korea and Eritrea.

It’s a double embarrassment for Berdimuhamedov, whose government has insisted that the country remains entirely free of Covid, yet “restrictions linked to the Covid-19 pandemic” were the reason given for losing the World Championships.

But while Turkmenistan insisted it was Covid-free, citizens were still required to wear masks, travel was banned, and mosques and restaurants have only recently been allowed to reopen.

The reason? “Pathogens” and “contaminated dust” blowing in from abroad, which led to bizarre scenes last year of aircraft spraying empty countryside around towns and cities with disinfectants.

President Berdimuhamedov, known as “Arkadag” (Protector) to his people, is often photographed flatteringly taking part in sporting events such as cycling, horse riding, and rally driving. But abroad, he’s criticised for his disregard of human rights and mismanagement of the economy.