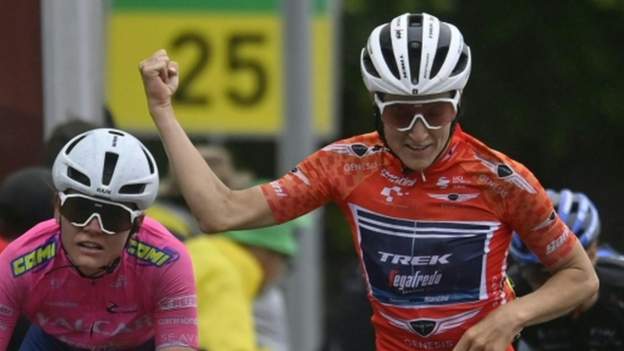 Trek-Segafredo rider Deignan trailed Chabbey by four seconds after finishing second to the Swiss on stage one.

But on stage two, won by Italy’s Marta Bastianelli, she picked up bonus seconds at two intermediate sprints, with Chabbey hampered by a fall.

“I had a restless night, but it was clear I had to go for the bonus seconds,” said Deignan, 32.

“The sprint defeat against Elise on Saturday annoyed me terribly because it was due to a mistake on my part.”

Asked if she could have relied on the final sprint at the end of the 96.8 km on day two, Deignan, who finished six seconds behind in 11th, added: “I don’t particularly love the mass sprints, especially since I’m slowly becoming an old lady.”

Deignan’s fellow Briton Hannah Barnes came third behind Bastianelli on stage two of the Swiss event, being held for just the second time – and the first since 2001.

Former road world champion and 2012 Olympic silver medallist Deignan won La Course last year but has been out with illness for most of this season.