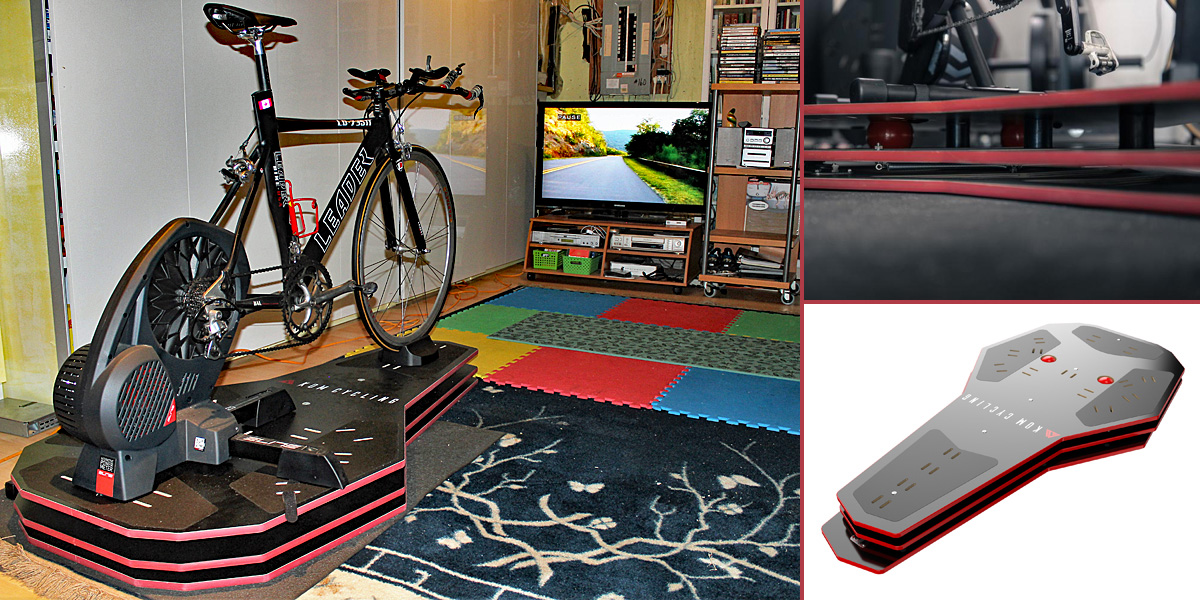 While perhaps not ranking among Early Adopters—I think Peak Bicycle was reached about 2005 and I loathe cellphones—I have nonetheless embraced indoor cycling training with considerable enthusiasm. Over the years there have been huge steps forward in making a once-arduous task bearable and even enjoyable. Now with smart trainers and immersive training apps we have another leap towards realism: the rocker plate. 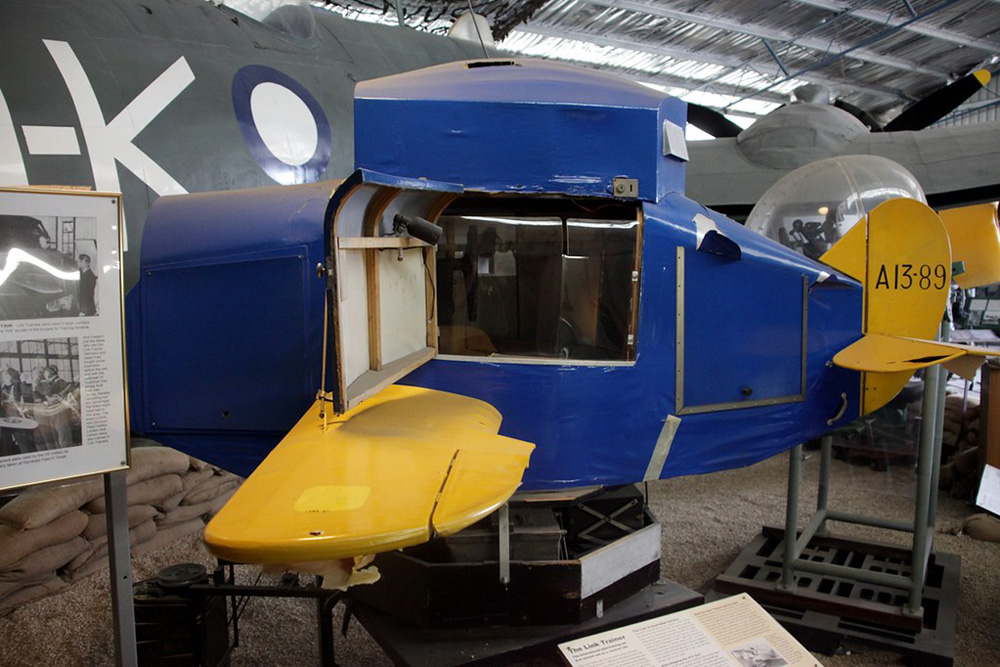 As a private pilot, I have experience with full-movement flight simulators. Riding through the mountains with Rouvy or Open Road using a big screen monitor gives a real sense of place but the fact that the bicycle on the smart trainer is in a fixed position takes away from the effect. Furthermore, being unable to move much except for standing up from time to time makes very long indoor training rides a bit painful. This fact was made clear a few years ago when I completed The Sufferfest’s Knighthood of Sufferlandria competition, a 10 hour stretch on the trainer. So it was with some interest I have followed the emergence of rocker plates as an accessory. 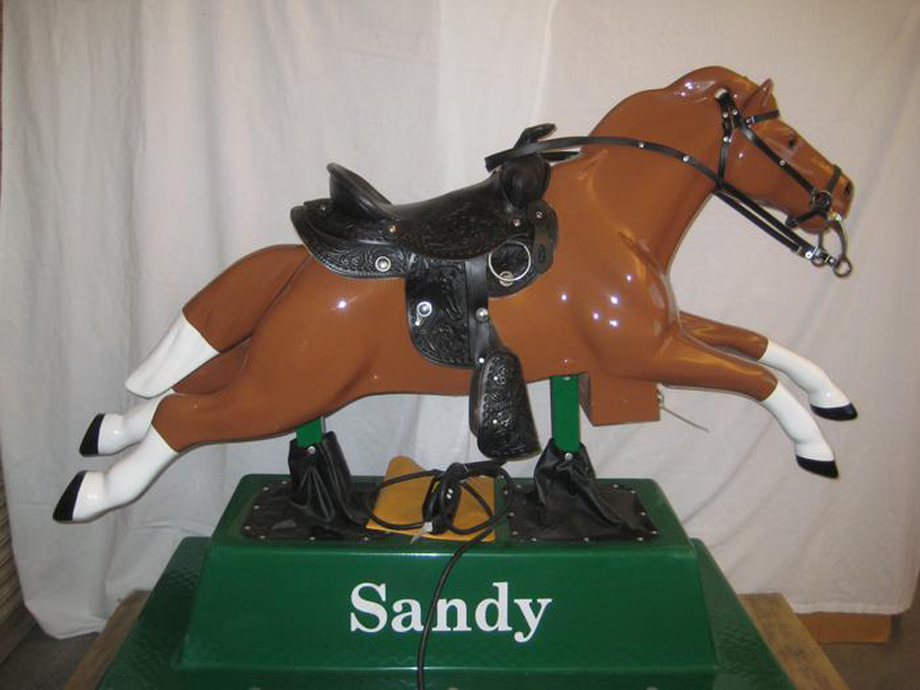 A rocker plate is simply a platform that pivots from side to side to replicate what actually happens as the bicycle moves around when you are riding on the road. It has to be a heavy unit to support the weight of a trainer and rider and still be able to shift. In the last few years do-it-yourself communities have arisen on the Internet showing how to build your own. For real cheapskates, there is a Dollar Store version: simply put inexpensive foam balls under the legs of your trainer! This works for about, well, three minutes… 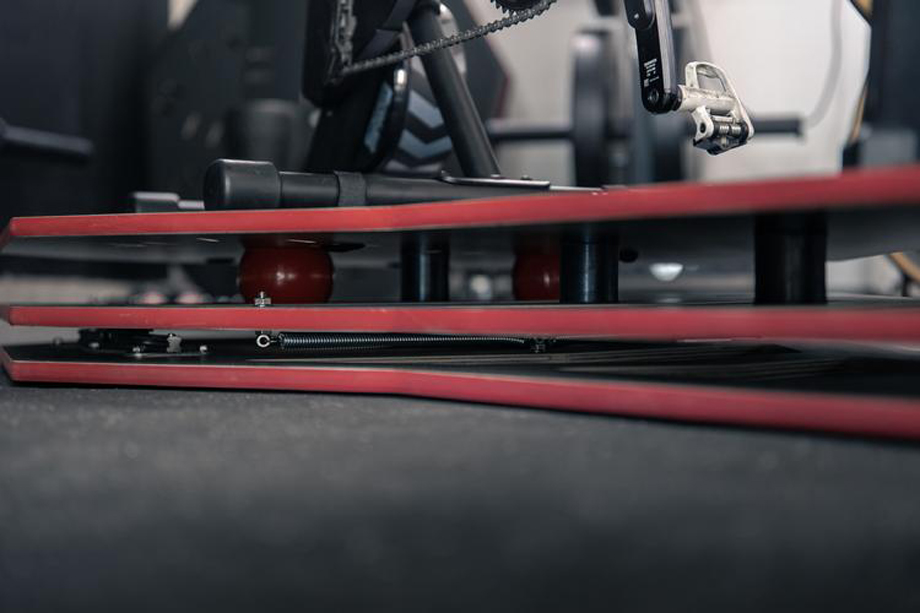 Side-to-side motion is one thing but the latest is the ability to move forward and backwards and so it was with some excitement that I saw manufacturers offering not only complete rocker plates but ones that move in two planes. The first unit on the market was very expensive while some of the others had very limit fore-aft movement. Enter KOM Cycling, which has already had good reviews of its cost-effective RPV1 rocker plate, with the—ta da!–RPV2. In addition to the 13 degrees of side movement, this new unit can shift nine inches front to back. Just the thing for me!

An enormous coffin-shaped box arrived quickly at the Pez Test Centre and with some effort I got it into the Pain Cave and unpacked the RPV2. It is big and heavy, which is a good thing when putting out the watts. Capable of supporting 425 lbs (193 kg) of smart trainer, bike and rider, it weighs in at a hefty 66 lbs (30 kgs) and is 34” (86 cm) at its widest point. First impressions: the unit is really attractive (the Significant Other was impressed too), with a nice finish and some non-slip sections on the upper deck. It actually has three plywood decks, one more than the RPV1, in order to accommodate the three roller-bearing rails that allow that fore-and-aft movement. I cannot imagine saving much money by building one yourself at the US$799 MSRP given the price of plywood in today’s pandemic and the various fittings. 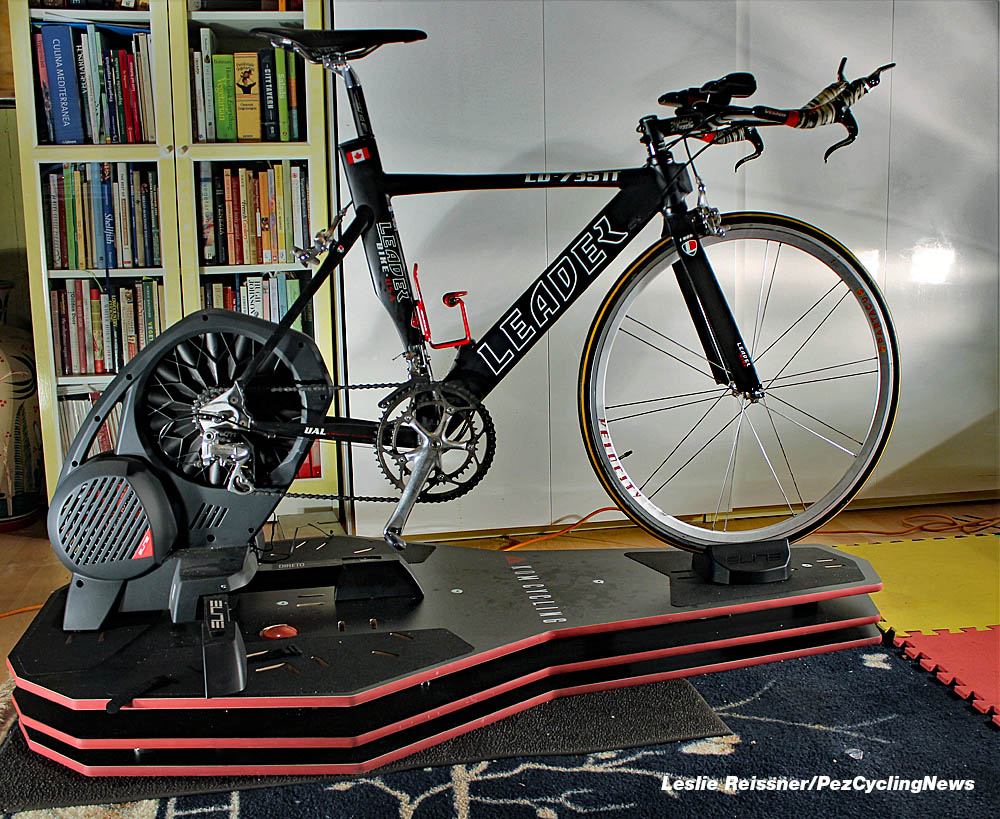 Included in the purchase was a bag containing a pump, four inflatable balls, a level, and a bunch of straps. Assembly was crazily simple, even for Mr. Two Left Thumbs me. Insert two of the balls in the spaces in the upper deck, with their inflation holes pointing up, then gently inflate them some they are both level. It is not clear if you can deflate the balls if you put in too much air (limiting the rocker plate’s movement somewhat) but they will very slowly let out air over time. The straps are meant to hold down the trainer through slots in the unit so that the pitching movement does not cause any sliding but this was not a factor for me given the weight of the trainer (and rider!). In any event, the straps were simply too short to work with my Elite Direto so I might just get some longer ones to be doubly secure. 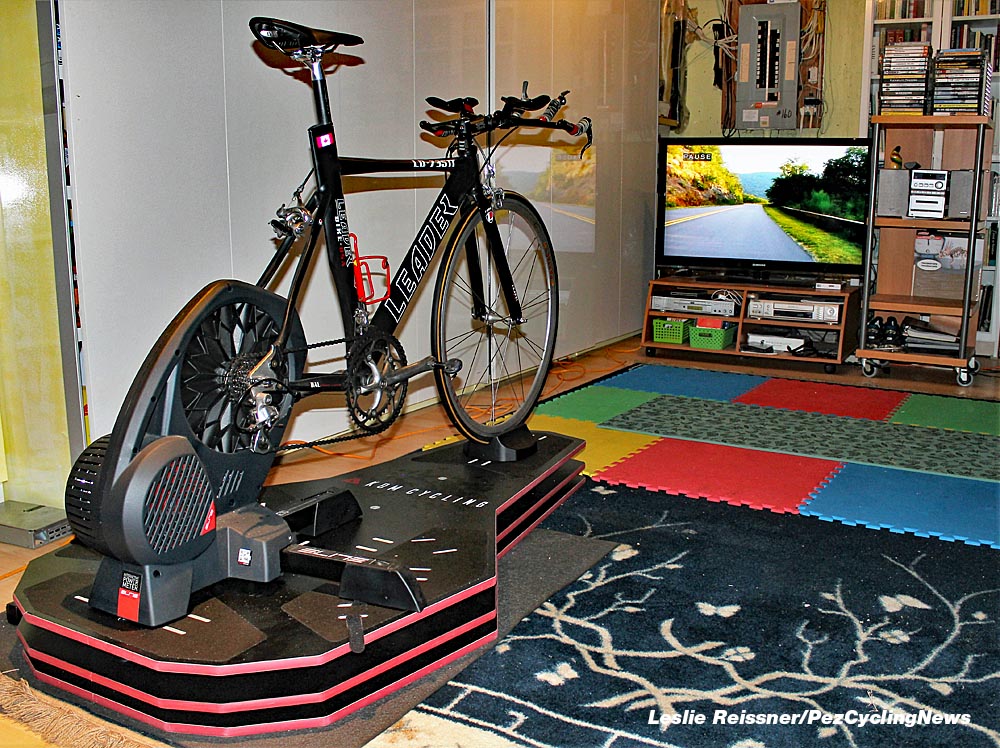 The straps were a minor issue but having set up the trainer and bike and getting ready to ride I discovered that getting up on the saddle was going to take some thinking: the RPV2 is 6” (15 cm) tall and as my trainer already had raised up my bicycle it looked like I might need a ladder! Standing on the rocker plate is not much help as (surprise!) it rocks but through trial and error I was able to position a step stool at a suitable point and was ready to go. Well, not quite—I had to pitch up my two fans so air flow would reach me and I discovered the table next to my trainer was now too low to reach my bottles. Easy fixes in both cases.

Now for the first test. I decided to go with a Rouvy challenge, Col de la Colmiane, that offered a long flattish opening followed by a pretty brutal climb, so 55 km and 1438 meters of virtual climbing. As I began to ride I found that the bike swayed a bit alarmingly and I kept my movements very limited. It does take some time to feel confident although a day after the test I did an outside ride and concentrated on how the bike actually does move under you and it was in fact quite similar but we just do not notice it to the same extent outside the Pain Cave’s need for concentration. The flattish section went by pretty well and during the big climb getting out of the saddle was a bit scary but by the time I reached the end (3 hours 11 minutes later!) it was feeling more natural. I particularly liked the fore-aft movement when accelerating and climbing.

In addition to not feeling totally comfortable, I did notice two other effects: my wattage was somewhat lower than normal and I could feel the effects of the ride on my core muscles much more than with the fixed trainer. Good weather intervened but a week later I was ready to try a flatter, faster course: Cape Naturaliste in Australia was 26.3 kms long, with 366 m of climbing. However, after a week of inaction one of the balls had deflated slightly when I used the level to check and I ended up inflating both balls a bit more than I intended. This resulted in a much better ride for me, albeit with somewhat reduced side-to-side motion and allowed me to climb out of the saddle with more confidence. Therefore the rider should experiment with the optimal setting to get the best experience.

Feeling a lot better, I then went racing, doing two of the Frauenfeld 10.8 km time trials on Rouvy. This was a big success as I even exceeded my normal wattage range and the RPV2 really felt much more natural and contributed a great deal to the realism of the experience. After the six hours I have put in with the rocker plate I am convinced that it is a worthwhile thing for someone who, like myself, is encouraged by his Significant Other to just stay in the Pain Cave and ride. Seriously, though, I am now already at the point where I cannot imagine riding indoors without it. 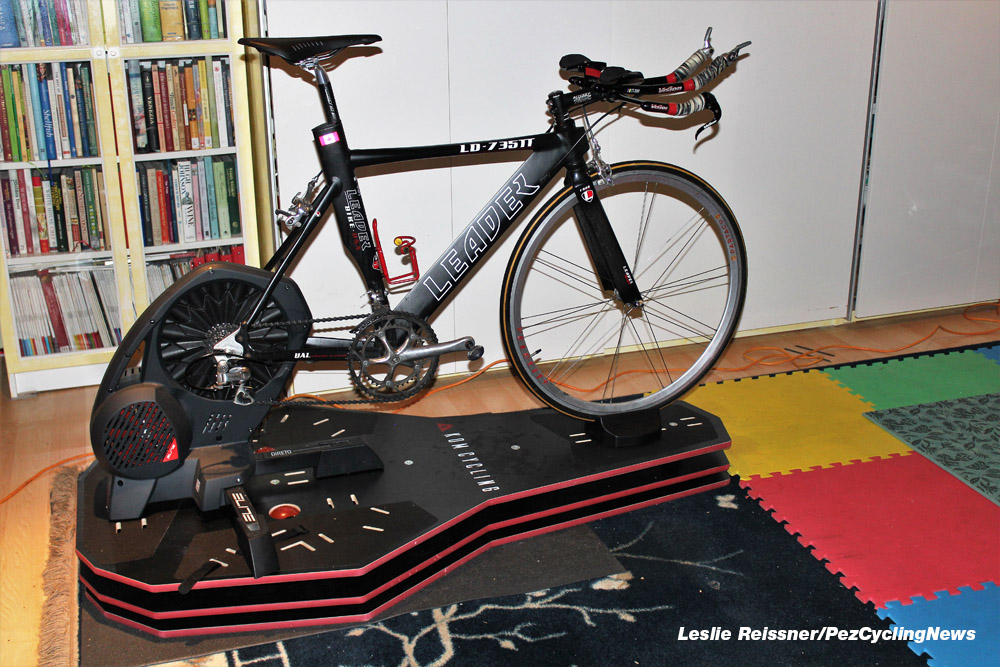 Positive points: the KOM Cycling RPV2 is a well-crafted unit that provides a realistic cycling motion simulation. It is attractive and easy to assemble and is priced very competitively for a two-axis rocker plate. On the negative side it takes up space which might be lacking in, say, an apartment, although you might be able to slide it under a bed. And for those of us for whom looking good is more important than being fast…be prepared to look graceless getting on and off! 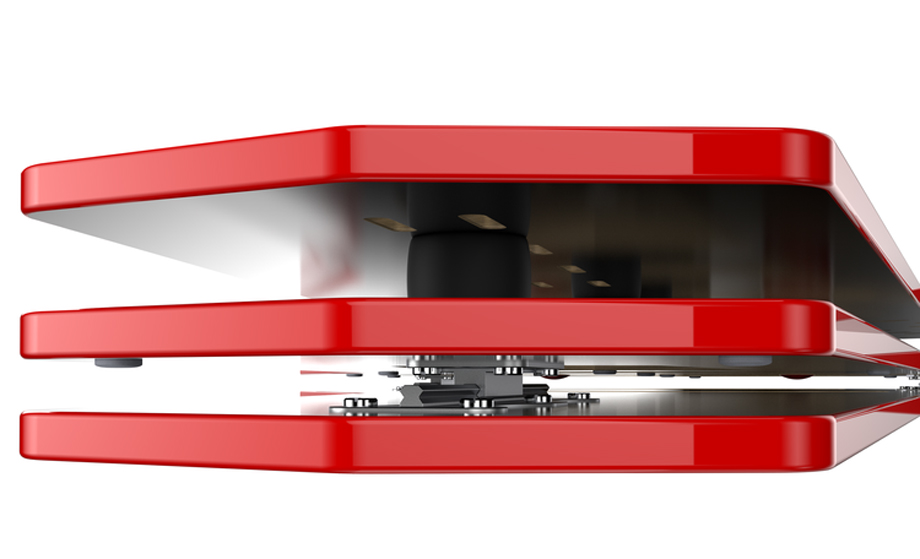 Owners of an RPV1, which only has the side-to-side motion, can get an upgrade kit to convert their units to RPV2s.

● For more information, check out: komcycling.com 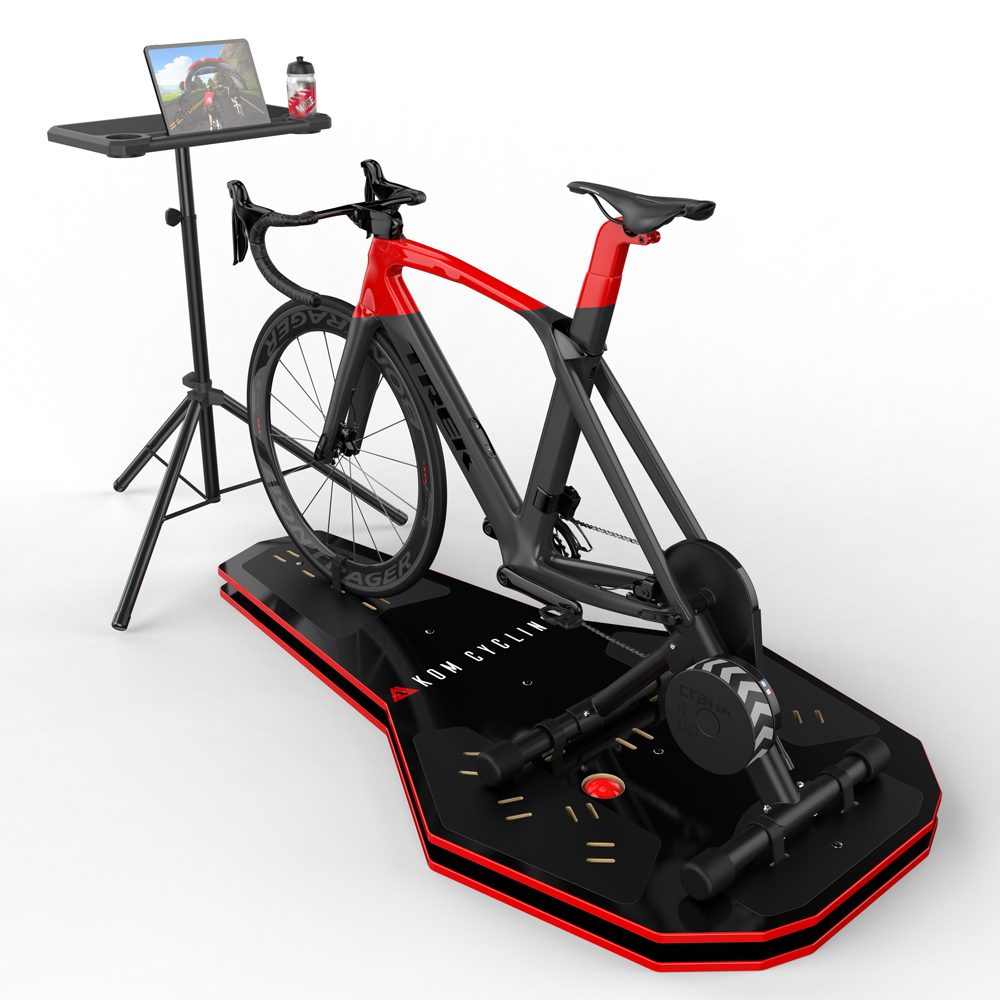