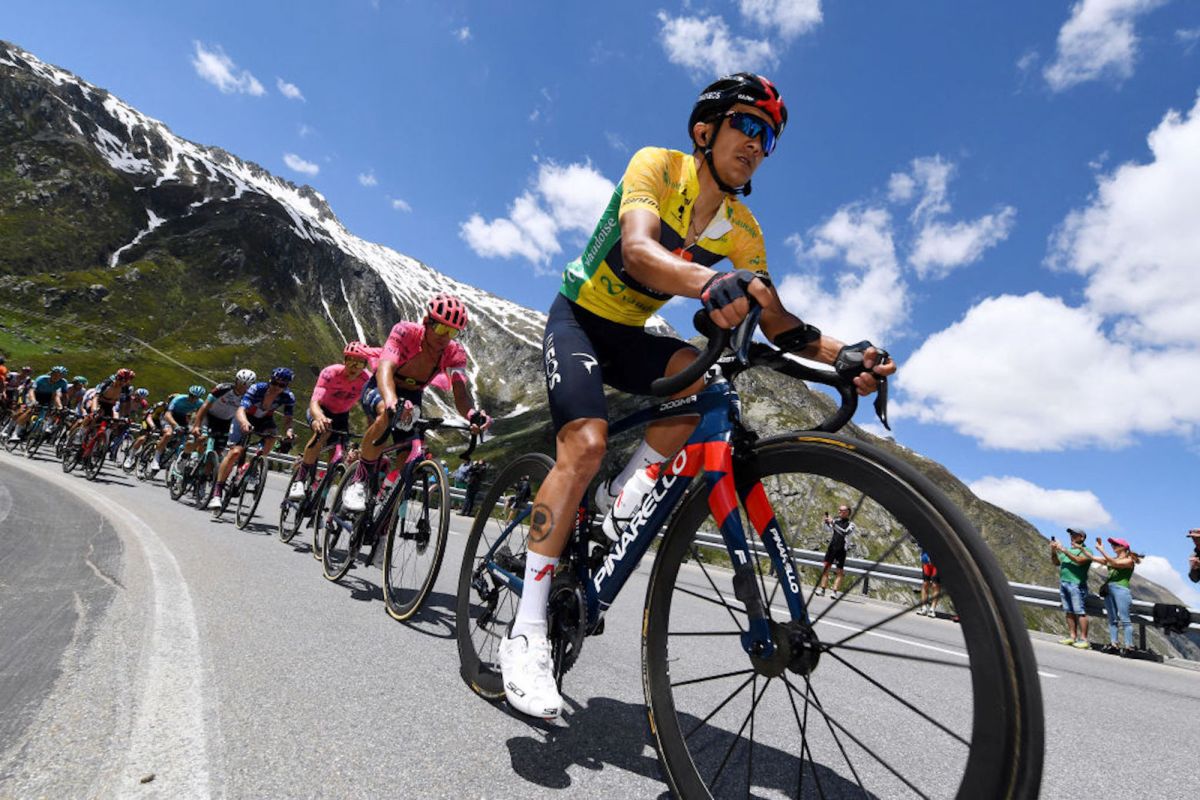 Ecuadorian Richard Carapaz resisted all attempts to dislodge to win the Tour de Suisse overall on Sunday. The Ineos Grenadiers rider was left with only one team mate three kilometres before the top of the final climb, but fought off his challengers to take the win, 17 seconds ahead of Rigoberto Urán (EF Education-Nippo).

Irishman Eddie Dunbar played a large part in Carapaz’s defence, chasing down attacks, and keeping the pace high enough to ensure any attacks were blunted.

The 160k stage was exciting from gun to line, with home rider Gino Mäder (Bahrain Victorious) coming out on top. On the descent from the final climb the 24-year-old bridged to solo leader Michael Woods (Israel Start-Up Nation), the pair working well into the final 300m.

Woods opened his sprint 200m out, but as cobbles turned to tarmac the Swiss was able to come over the top. Woods took second place, nine seconds ahead of third placed Mattia Cattaneo (Deceuninck-Quick-Step).

With the general classification so tight ahead of Sunday’s final stage, there was jeopardy right to line, especially with Jakob Fuglsang (Astana-Premier Tech) fighting hard to win a place on the podium.

The day was aggressive throughout, and such was the persistence of the attacking his Ineos Grenadiers team only gained control in the valley after the day’s second climb.

The king of the mountains was a fantastic subtext, and saw the classifications’ chief protagonists fighting to get into the day’s breakaway, then fighting for the points. The winner of that competition though came from the GC group, Woods (Israel Start-Up Nation) winning the points on the last climb.

For the third stage in succession the Tour de Suisse based itself in the Alpine town of Andermatt, more than 1400m above sea level.

Sunday’s race was a combination of Friday’s sixth stage and Saturday’s mountain time trial, with both routes added together and ridden in the opposite direction. This made for a particularly tough day, with Oberalppass, Lukmanierpass and the Gotthardpass combing for a total of 3,560 metres of ascent.

After that final climb, bridging the border between Italian and Swiss speaking Switzerland, there was then the 16km descent back to where they started in Andermatt, the line situated by the Aurora Hotel, once the site of a petrol station visited by James Bond in the 1964 film, Goldfinger.

Uphill from the start attacks began the moment the flag dropped, Wout Poels (Bahrain Victorious) getting away while chaos reigned behind him, other teams desperate to close him down.

Over the top of the Oberalppass, with 12km done, Poels had a lead of around 20 seconds, but Poels was caught by five chasers on the descent. Now with Marc Soler (Movistar) Omar Fraile (Astana-Premier Tech), Fabien Doubey (Total Direct Energie) Dries Devenyns (Deceuninck-Quick-Step) and Søren Kragh Andersen (DSM) Poels’s group were not allowed too much space, with three chasers only 15 seconds back when they reached the bottom.

The road began to climb almost as soon as they reached the valley, and the leaders were joined by Swiss champion Stefan Küng (Groupama-FDJ) and two DSM riders, Tiesj Benoot and Andreas Leknessund, making for a group of nine riders.

However, behind, after 37km and the briefest of respites, more attacks came from the peloton and those who had just managed to get back on drifted backwards again as the bunch began to shatter on the climb to Lukmanierpass.

Hermann Persteiner (Bahrain Victorious), Nans Peters (Ag2R Citröen), Mauri Vansevenant (Deceuninck-Quick-step) also got across, and a group of 15 fought for the mountains points on Lukmanier, as the peloton allowed the gap to grow.

The gap was never more than 2-30, but when another small group of chasers was caught inside the final 70km the race finally settled. With the peloton re-formed and leaders reunited with their domestiques, Quebeka-Assos, Jumbo-Visma, Bora-Hansgrohe and Israel Start-Up Nation leading the peloton.

As the final climb approached cohesion in the breakaway began to falter, leaving only Devenyns, Pernsteiner, Peters, Leknessund and his DSM team-mate Benoot at the front.

As they reached the cobbles of the Tremola climb of the Gotthardpass only Benoot and Pernsteiner remained, while Carapaz’s team led the bunch only 30 seconds back.

The Austrian made an attempt to stay away, but was only delaying the inevitable and was caught when the attacks began three kilometres before the top of the climb, when Neilson Powless (EF Education-Nippo).

The American’s team leader Urán began the day only 17 seconds behind Carapaz and himself attacked shortly afterwards, dropping Carapaz’s only domestique, Eddie Dunbar. However, Urán was unable to shake his rival and a group of nine formed.

Israel Start-Up Nation’s Mike Woods took a 20 second lead over the top of the climb, and on the  15km descent to the line was joined by Gino Mäder (Bahrain-Victorious) the pair going on to fight for the win.