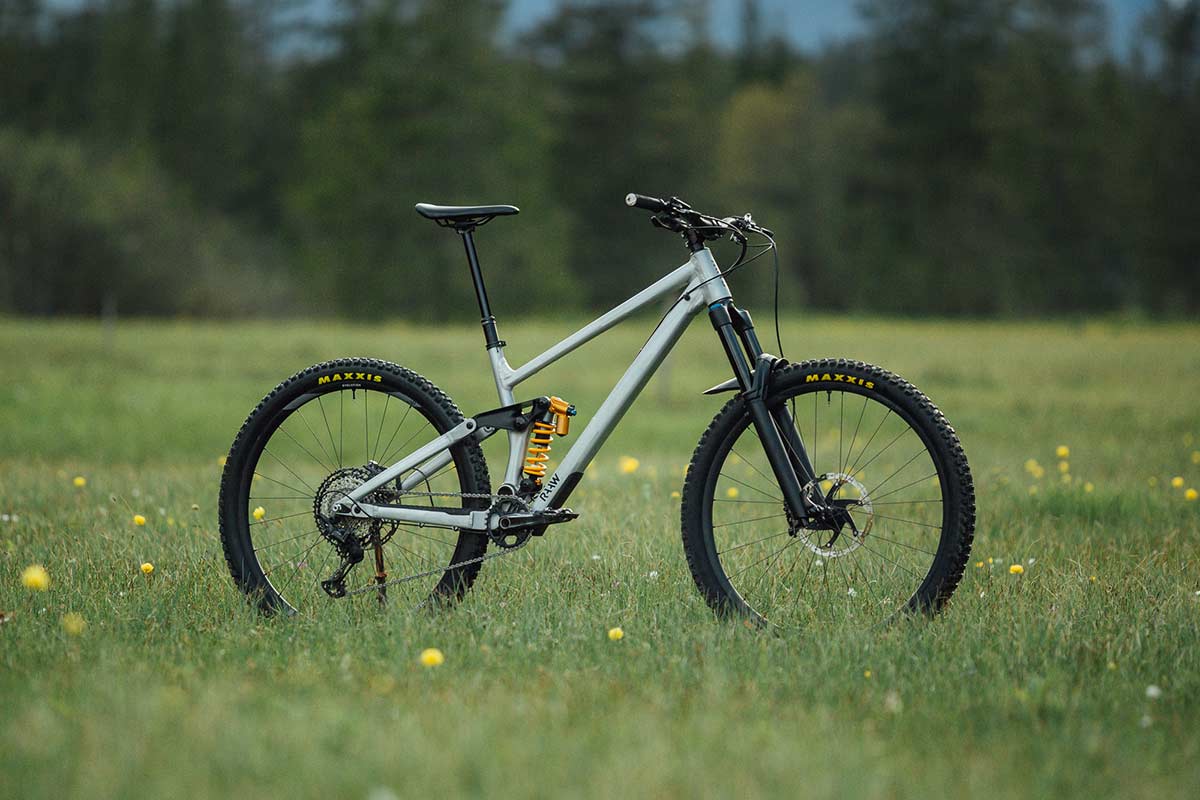 Raaw mountain bikes have lifted the veil on the not-quite-third generation Madonna, the so-called V2.2. Maintaining the geometry of the V2 (if it’s not broken, why fix it), Raaw have refined the frame design to improve force flow throughout the suspension linkage and improve hardware tolerances. Here’s the what and why regarding the Raaw Madonna V2.2, but first…

The magnificent sound of a bike just… working. Praise be.

Raaw have redesigned the Madonna around an improved seat tube. The now single-piece hydroformed aluminium tube is designed to create a large intersection to the main pivot and rocker pivot with a reduced, but carefully defined, number of welds. This is said to increase strength while helping to distribute stress more evenly. For that reason, Raaw have been able to reduce the wall thickness thereby saving a little weight.

Altering what is effectively the backbone of the bike, the redesigned seat tube prompted a redesign of almost all of its interfacing parts; the bottom bracket, lower shock mount, rocker link and rocker pivot.

The new BB design integrates the interface for the lower shock mount and allows for more shock clearance on the small and medium frames. On the large and extra-large sizes, the redesign allowed Raaw to tuck the down tube further in, improving ground clearance while still allowing plenty of space for the accommodation of a wide variety of shocks; coil and air, alike.

The lower shock mount now consists of two separate parts attached to the CNC machined interface on the bottom bracket. Raaw say this guarantees a very defined flow of stress from the shock into the frame. It also improves the tolerances and fit of the shock hardware, much like the brake mount on the non-driveside seat stay does.

Also new for the Madonna V2.2 (and available for the V2 and Jibb frames) is a new thru-axle system. It is designed to create a more rigid connection between the two dropouts, locking the left and right seatstays into place, resisting rotation and bending. It should also stop the axle from undoing while you’re riding.

Madonna V2.2 (and all frames sold since 2017) get five year warranty

Raaw mountain bikes have now extended their frame warranty to five years, which extends to both the original and second owners. Not only does it apply to the new Madonna V2.2, it also covers all Raaw frames sold since 2017 (i.e. the Jibb and Madonna V1 & V2).

Due to the absolute state of parts availability across the industry, Raaw are holding off on selling full bikes. So, it’s frame and shock only, for the time being. The frameset including thru-axle, seat clamp and protective film retails at 2,390 € incl. VAT (that’s 2,008 € outside the EU). Shock options from Fox and Öhlins are available as well as Acros headsets.

The first batch of Madonna V2.2 frames is ready for shipment from Taiwan to Germany and is expected to arrive at RAAW HQ at the beginning of August.

Want your V2.2 earlier? For an additional 125 €, Raaw are offering keen customers express delivery. This will secure you an air freighted frame, reducing the shipping time to Germany
down to two weeks. The express delivery comes on top of the regular shipping and is available until Sunday June 20th 23:59 CET.