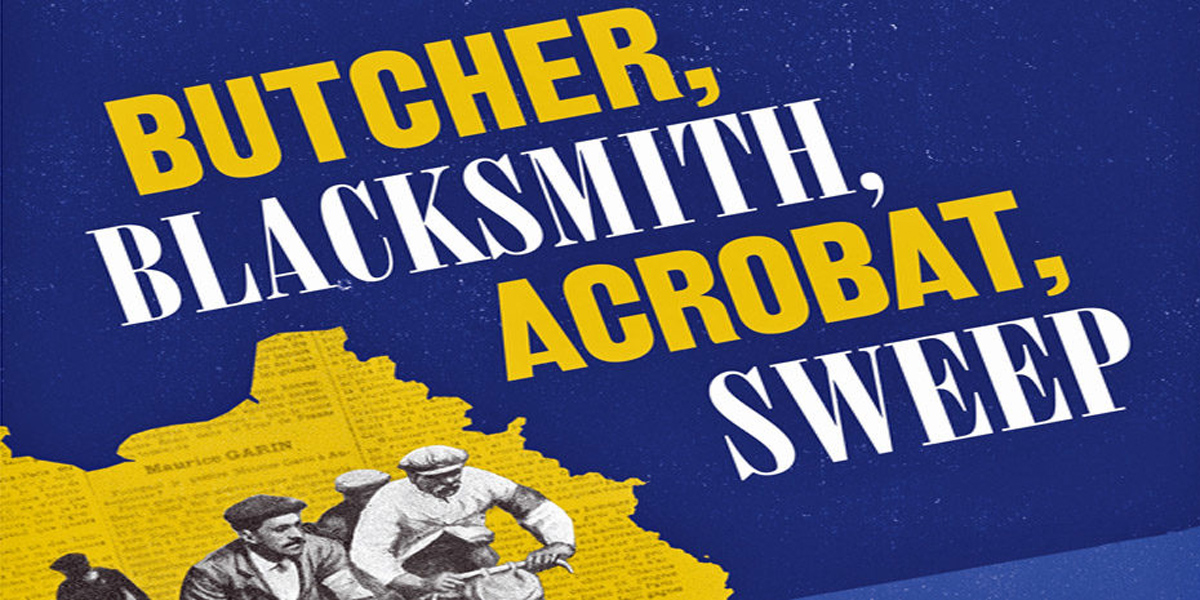 Since 1903 the Tour de France has occupied a three week slot in July, overshadowing every other event in the cycling calendar, and making the sport, with its competitive highlight in the middle of the season, strangely unbalanced. But as author Peter Cossins describes in his history of that first race, the inelegantly titled “Butcher, Blacksmith, Acrobat, Sweep”, the original Tour de France, something totally new and untried and flawed in many ways, “should be considered as one of the greatest events in sporting history.” 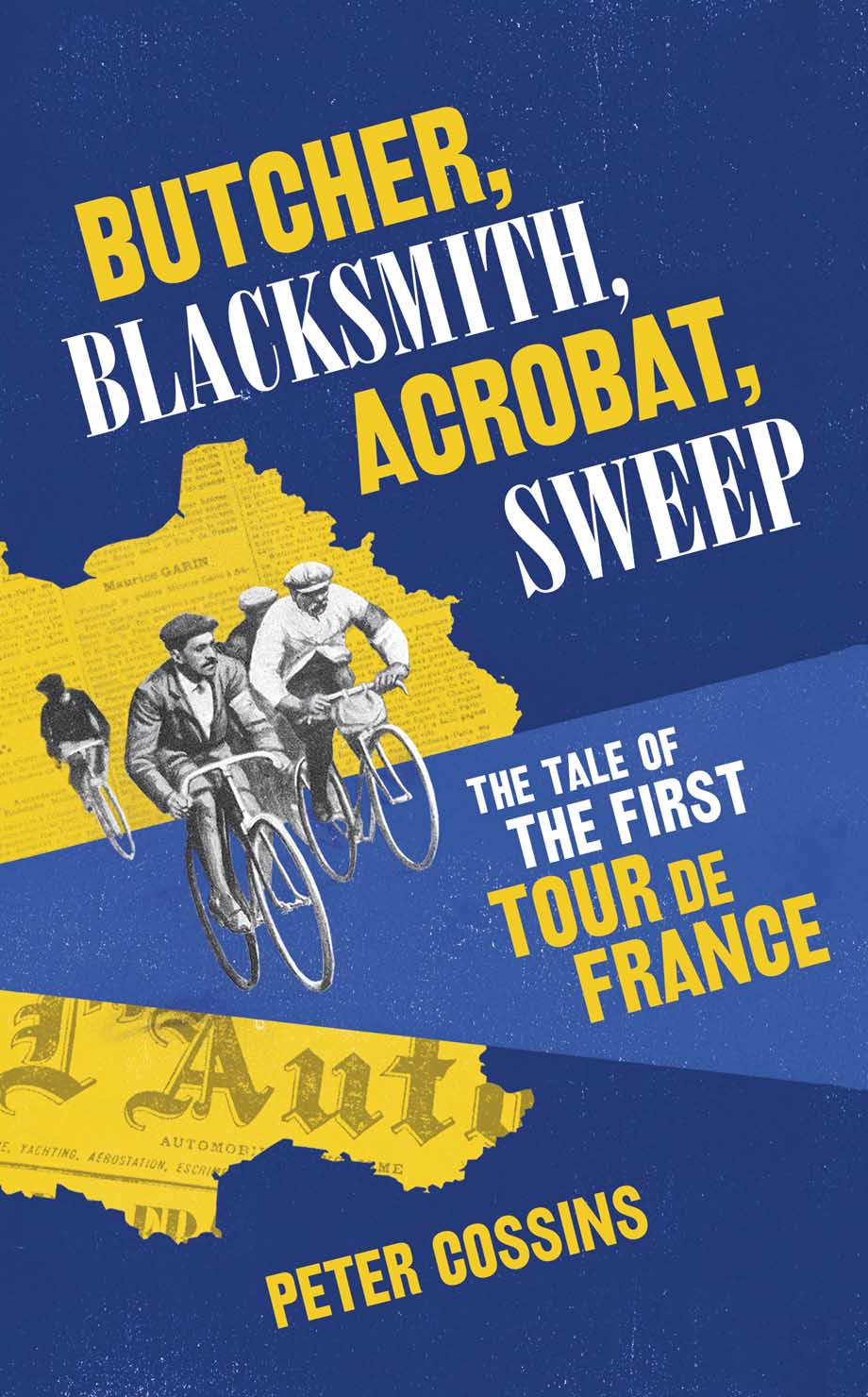 The prime mover of racing was the sports publication L’Auto-Vélo, soon to be renamed L’Auto after a legal dispute with its fierce competitor, Le Vélo. It took over the infernal Paris-Brest-Paris race (a 1200 km event that continues to this day as an amateur event) in 1892 and seeing a big boost in circulation then came up with the very successful 938 km Marseille-Paris race in 1902. This set the stage for something even more ambitious, even crazier, and although the legend is that the idea for a Tour de France came up over a working lunch like a bolt from the blue, the truth is that the staff of L’Auto already had experience with organizing a monumental race. It was the brainchild of Gèo Lèfevre, cycling correspondent for the newspaper, although the editor, Henri Desgrange, would come to be identified as the key organizer of the race once it was clear it was going to be a success. Lèfevre was to be the official timekeeper of the race and followed it by train, car, and his own bicycle, while also contributing the breathless and hyperbolic accounts of the race for which L’Auto (and French sports journalism) was to become noted. 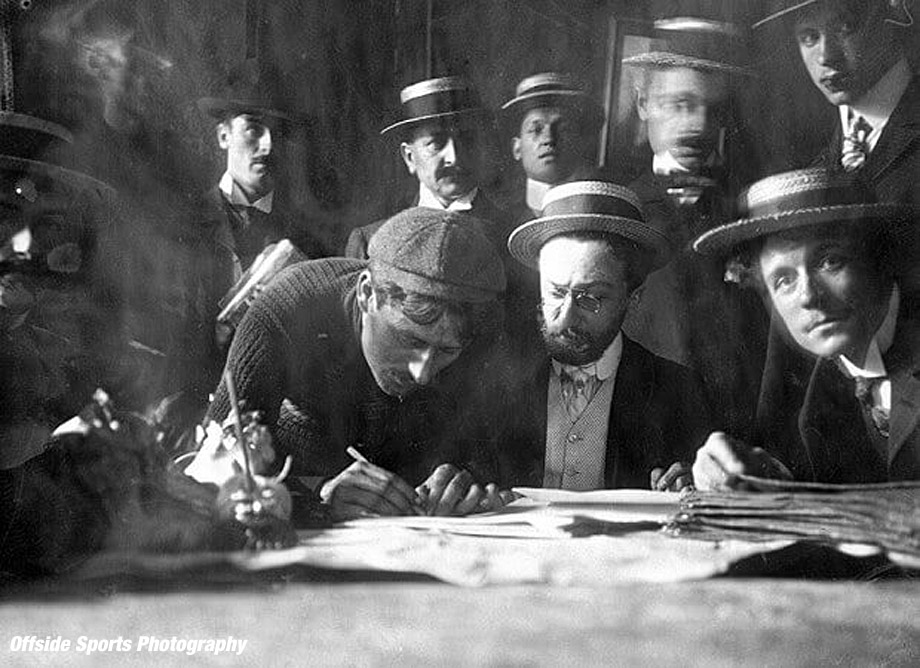 The idea of a multi-day stage race covering France was unprecedented as up until that time races, such as Bordeaux-Paris, Liège-Bastogne-Liège and Paris-Roubaix, were all single day events (admittedly very long single day events). The first proposal was for a five week Tour de France, eventually whittled down to three weeks. The stages were, in our modern view, insanely long but rest days were included that were longer than the two days of the present race.

115 years ago organization of a cross-country race was pretty casual. One of the entrants, an Italian living in France named Rodolfo Muller, sent descriptive letters to Lèfevre as he did a reconnaissance of the route, describing the road conditions and what route riders should best take. In addition, information was received from local correspondents of L’Auto. Ideas of crowd control were wildly inadequate. Prize money was announced in January 1903 and registrations began to trickle in – but only 15 were received. Competing journals, particularly arch-rival Le Vélo, ridiculed the project, calling it “a phantom race.” Shortening the length of the race to three weeks, increasing the prize money and reducing the entry fee at the last minute saw a big boost in interest. While 79 riders had registered by the launch, only 60 brave souls actually took the start line on July 1, 1903, prepared to make history (and win some francs). 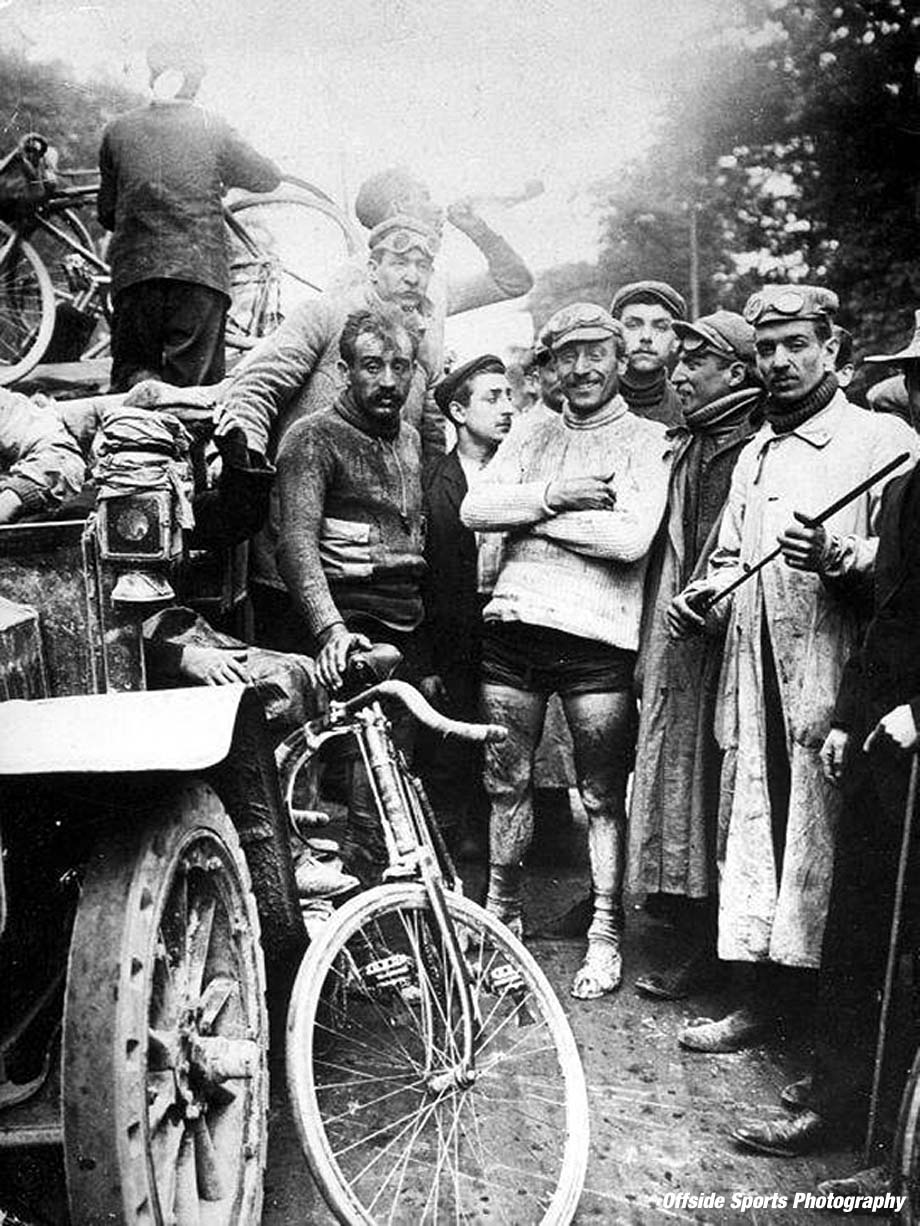 The start of the race was not promising as only a small crowd turned up to watch the race begin in Paris and Desgrange and Company were concerned that their daring project would be a big flop. However, as the racers left the city it soon became apparent that the idea of the race had electrified the rest of France and huge crowds were in evidence everywhere during the five stages of the race. Circulation of L’Auto increased sixfold and readers simply could not get enough about the Tour de France and its participants.

Those 60 riders were quite a group and ranged from favourite Maurice Garin and a select group of other professionals to many riders who had essentially no racing experience. Garin, who had been a chimney-sweep growing up in poverty, won Paris-Roubaix in 1897 and 1898, and Paris-Brest-Paris in 1901; the blacksmith of the book’s title was Jean Dargassies, who had only been cycling for a short time and had never heard of Garin or any of the other racers, fascinating Gèo Lèfevre. 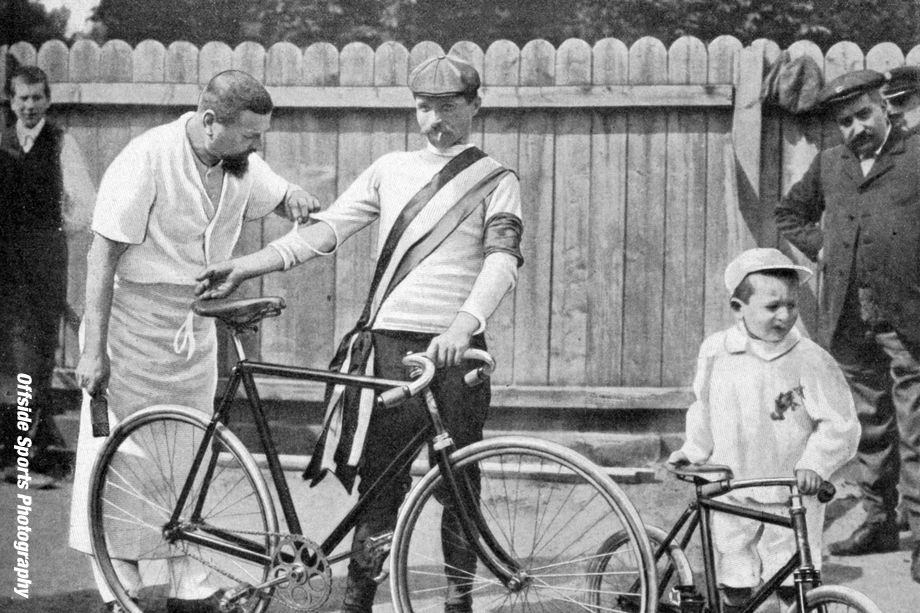 Dargassies was a jokester and was noted for his trademark twirl of his moustache. One of the strengths of this book is author Cossins’ effort to personalize the riders. He has drawn heavily from the original accounts in L’Auto and other journals and the cast of characters is noteworthy: the hyper-competitive (and not very sporting) Garin in his white jersey; his unheralded young teammate, Émile Pagie, who amazed everyone during the first stage; the bad-tempered Jean Fischer, nicknamed “the Climber,” although the first Tour de France was flat for the most part; Léon Georget, noted for consuming prodigious quantities of red wine while underway; Josef Fischer, the first winner of Paris-Roubaix—these were the bigger names whereas many of the other riders were essentially anonymous and merely hoped to get the 5 francs daily stipend (covering their food and lodging) reserved for those who did not win anything much. Cossins thoughtfully includes a section on what happened to the racers after the 1903 Tour. Unsurprisingly, quite a few never raced again. 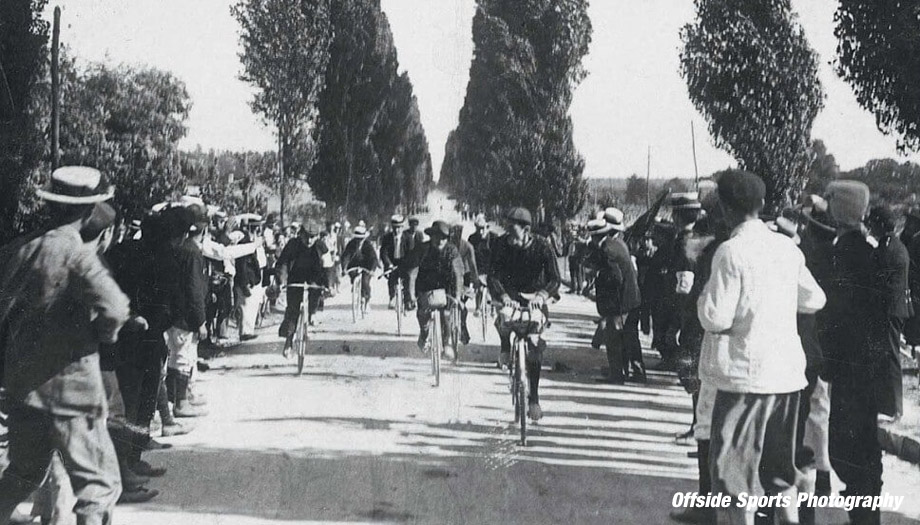 Charles Leaser (left, with armband) on his way to victory in Bordeaux

In addition to the stage lengths (the longest being a staggering 471 kms from Nantes to Paris), there were significant differences from today’s pro stage races. Riders could enter a single stage and a number of those who abandoned a stage and racing for the overall win could show up the next day and contest that stage. This was meant to encourage regional riders to take part locally but did not really work and was dropped in subsequent Tours. While the use of pacers was not allowed—seen as a major breakthrough and a way of levelling the field—there was an inequality nonetheless as riders like Garin, one of a dozen receiving essentially limitless support from bike supplier La Française in the form of bikes, mechanics, and food, were competing against riders who received no assistance at all and had to scrounge for food at checkpoints and do their own repairs. There were no time trials and essentially no climbs of note, although it would have been hard to ride rolling terrain on the heavy, fixed-gear bicycles used by the riders. A single rider had a freewheel-equipped bike. 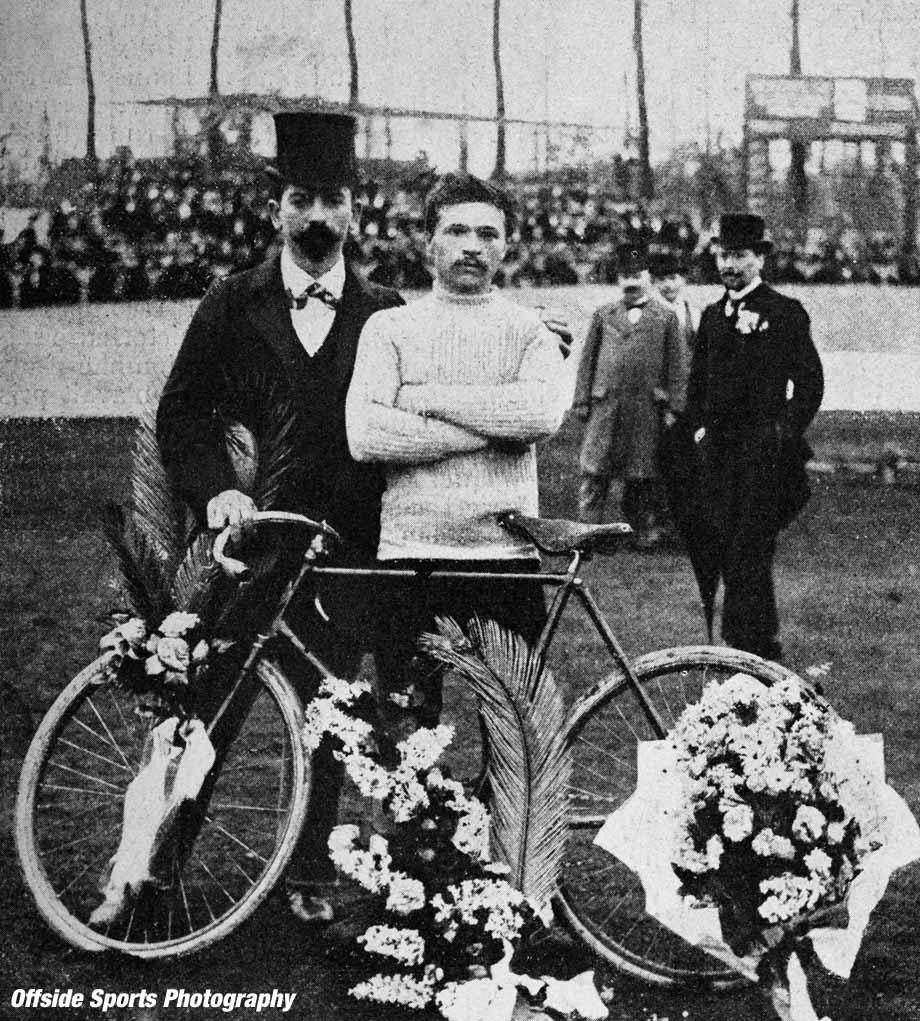 In terms of drama, there was not much missing, in spite of Garin winning three of the five stages on his way to victory. There were constant crashes, dangerous riding on unlit, unpaved roads at night, broken bicycles—racers occasionally borrowed bikes from spectators to finish the stage—and much love given to hometown heroes passing through. Although L’Auto was at pains to avoid mentioning the incident (and killing the golden goose), Garin’s teammates forced Fernand Augereau to crash when he would not agree to letting Garin win the stage, after which Garin himself stamped on the rear wheel of Augereau’s bicycle, breaking the spokes. Ultimately Augereau came third at the end of the race in Paris but it was clear that sportsmanship was not so important in the Tour de France. Cheating was taking place in bike racing; in 1904, of the 15 riders who finished at the Bordeaux-Paris race, 11 were disqualified and a month later at the second Tour de France the top four finishers were disqualified (for taking the train!) and causing Desgrange to consider ending the Tour de France.

Peter Cossins provides a succinct explanation of how a modern bicycle race works (worth showing to family and friends wondering what the fuss is about), with a breakaway eventually being caught and then the race finishing with a mass sprint or solo climbing exhibition. Tactics in 1903 were different as the riders simply went flat out from the starting shot, behaving as if they were on a 3 km sprint rather than a 400+ km slog. Garin’s average speed over the 2,428 kms was 25.678 km/h; his teammate Lucien Pothier (“the Butcher of Sens”) finished in second place 3 hours behind. 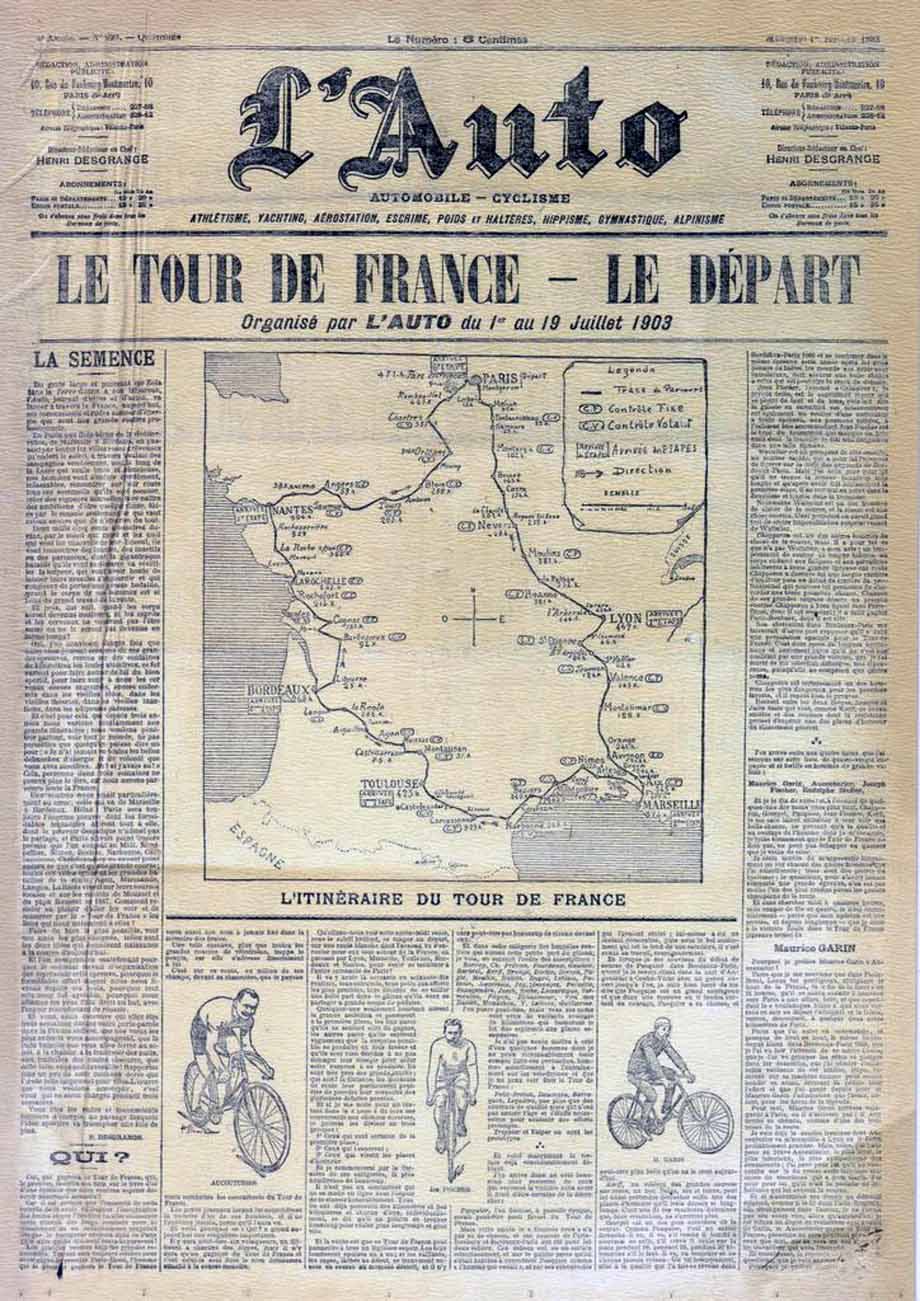 Perhaps even more remarkable was the organization of the Tour, with its checkpoints and management issues in a time when cars for following the race were rare and not reliable. From the sparse crowd at the start of the first stage to the massive throngs that awaited the race in rural France and at the conclusion in Paris, the race exceeded Desgrange’s hopes in every way and even competitors sang the event’s praises, although his direct rivals at Le Vélo and Le Monde Sportif would be out of business within a year… While certainly not flawless (and the 1904 edition showed how everything could go wrong), it was responsible for a massive surge in interest in bicycle racing, which became France’s national sport for decades, and showed the commercial possibilities of sporting events. And of course the greatest winner in marketing is France itself.

As Peter Cossins notes in his conclusion to this excellent and entertaining book: 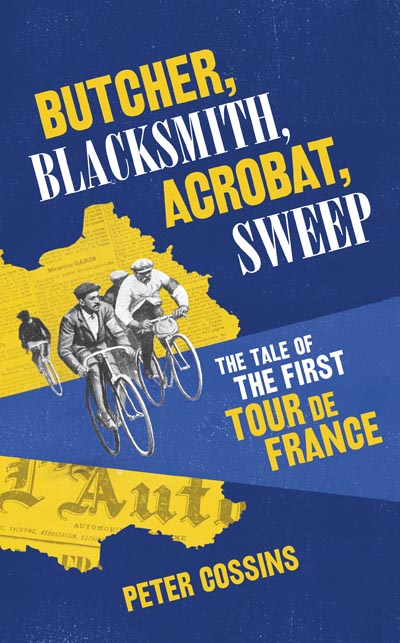