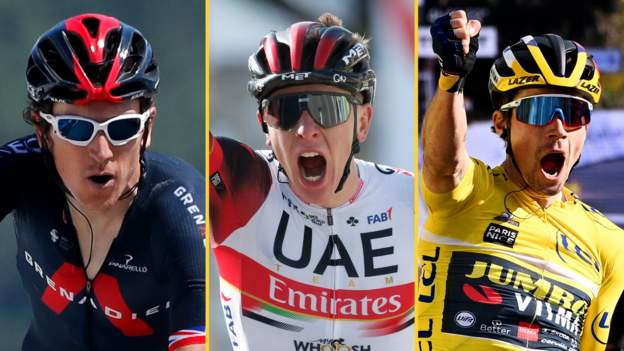 The 2021 Tour de France starts on Saturday with Tadej Pogacar and Primoz Roglic primed to repeat last year’s duel that saw Pogacar win in one of the race’s most dramatic finales.

But plenty of other riders are hoping to rival the Slovenian duo for the yellow jersey over three gruelling weeks, ending in Paris on 18 July.

The green points, polka dot mountains and white young rider’s jerseys as well as stage wins are up for grabs.

BBC Sport looks at the riders to watch.

The reigning champion overhauled Roglic in stunning style on the penultimate stage’s time trial during last year’s rescheduled race and has carried that form into this season superbly.

The UAE-Team Emirates rider has won the prestigious stage race Tirreno-Adriatico, ‘monument’ classic Liege-Bastogne-Liege, the UAE Tour and his native Tour of Slovenia already this year.

Still just 22, Pogacar could become one of the all-time Tour greats and looks to have a stronger team around him this year, with another breakout star of 2020 – Marc Hirschi – having joined.

Roglic, 31, responded impressively to his Tour heartbreak last year by winning Liege-Bastogne-Liege and defending his title at the Vuelta a Espana.

He has not raced much this year, preferring to train at altitude, but has had success – including beating Pogacar to win the Tour of the Basque Country title.

Jumbo-Visma also boast an accomplished Tour line-up, including Steven Kruijswijk, Sepp Kuss, Wout van Aert and Tony Martin, but how many of the scars of last year remain?

After a poor season saw him left off the Ineos roster last year, British 2018 winner Thomas returns in search of his second title in much better form.

The Welshman, 35, won the Tour de Romandie in May, took a stage win and third overall at the Criterium du Dauphine and finished third at the Volta a Catalunya earlier in the season.

While Thomas is likely to be Ineos’ leader, the British outfit are characteristically not short of other options, with former Giro d’Italia champions Tao Geoghegan Hart, 26, and Richard Carapaz, 28, as well as last year’s third-place finisher – 36-year-old Dauphine champion Richie Porte – all posing a general classification threat.

It has been 36 years since a Frenchman won the Tour title and, while that streak is unlikely to end in 2021, there are two home riders in particular who could animate the race.

With Thibaut Pinot and Romain Bardet set to miss the race, look for David Gaudu, 24, to make a step up as a general classification contender following an impressive eighth at last year’s Vuelta, which included two stage wins.

World champion Alaphilippe, 29, flirted with ending France’s hoodoo in 2019 before he was finally overhauled by Egan Bernal and overall victory is again not his main aim, but expect him to try to add to his five stage wins with typical panache.

After a knee injury to Ireland’s Sam Bennett of Deceuninck-Quick Step, in comes one of cycling’s most successful riders. No-one expected a resurgent, 36-year-old, Cavendish to appear at the Tour this year, but he now has a chance to add to his tally of 30 Tour stage wins – just four short of Eddy Merckx’s all-time record.

Bennett, 30, had became only the second Irishman after Sean Kelly to claim the green jersey last year – holding off record seven-time points classification winner Peter Sagan and winning two stages, including the finale in Paris.

Sagan has taken some impressive victories this season, Caleb Ewan could prove the fastest sprinter in the race and the all-round talents Wout van Aert and debutant Mathieu van der Poel could make the points classification a thriller this year.

But nothing will trump the return of Britain’s Cavendish, so fans will be hoping that age has not taken too much pace out of the pocket rocket’s legs.

After a stage win and third overall at this year’s Giro, Simon Yates will head to the Tour in search of stage wins rather than overall victory.

It’s a tactic that’s worked very well before, with the 28-year-old claiming two stages in 2019.

Britain’s Froome will not be winning a record-equalling fifth Tour title this year – the man himself has said so and he will ride in support of Michael Woods instead of as leader.

But there will still be plenty of intrigue around Froome – he has lost significant time in most races this season as he continues to recover from serious injuries sustained in a 2019 crash and, at 36, there are questions around whether he will ever rediscover the form to compete at the highest level.