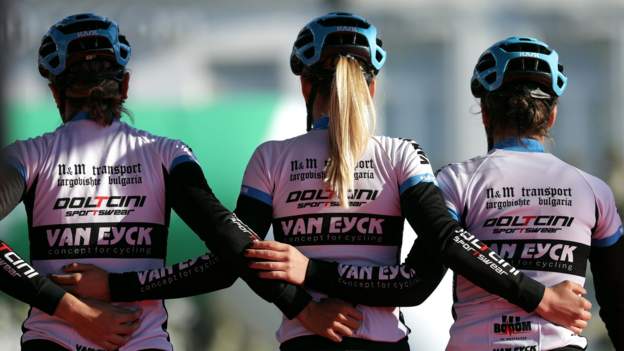 French rider Marion Sicot is among several women to report Bracke, with complaints that he demanded bikini photos of them.

The UCI said the “decision sets an important precedent” in the “fight against sexual harassment”.

Doltcini-Van Eyck have said Bracke will appeal against the ban.

In a statement, the Belgian team criticised the UCI’s handling of the investigation and reiterated previous claims that complaints from Sicot were motivated by a desire to minimise her suspension for doping.

The team, however, have previously admitted that bikini photos were requested of riders.

Sicot posted on Twitter that it “feels good” to have a verdict handed down after a two-year investigation and said she is still pursuing a criminal complaint against Bracke.

Bracke has been suspended by the UCI from all roles in the sport for three years and been told he must complete a harassment awareness course before he is granted a licence to return.

“It is essential for the well-being of athletes that they can have confidence in the institutions and feel free to report any form of abuse,” the UCI said in a statement.

“The UCI supports all people wishing to denounce such acts, whether they are victims or witnesses of conduct that does not conform to our federation’s rules of conduct.”