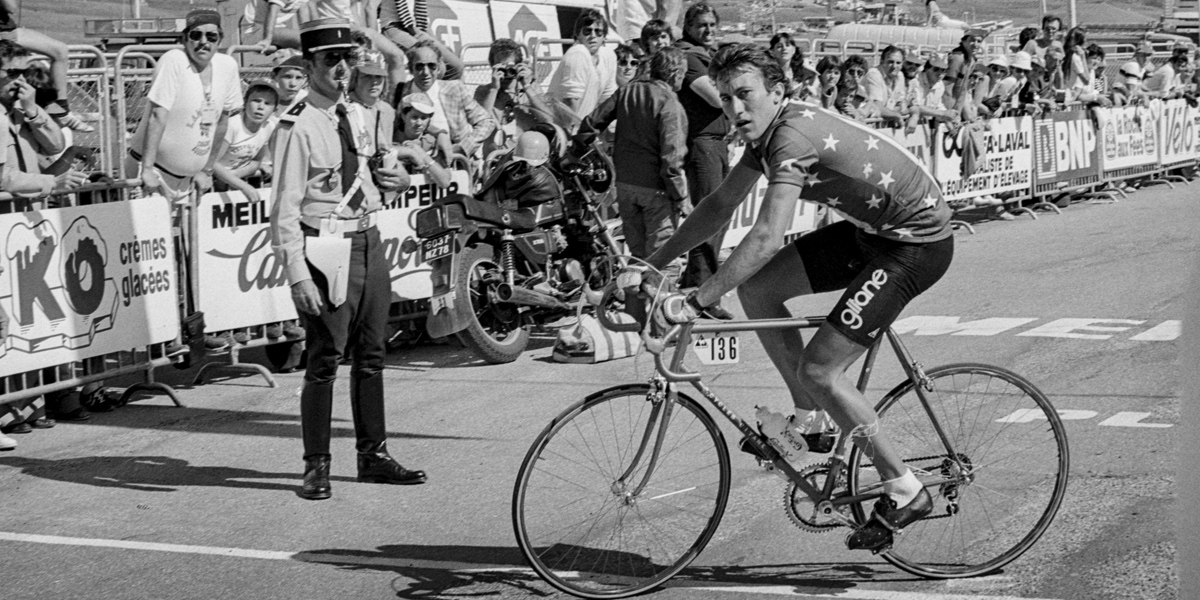 USA’s First Tour Rider Interview: The USA has had a checkered Tour history, high points with wins from Greg Lemond, and… Well, we know the depths, but who was the first man from the US to ride the Big One? Ed Hood spoke to Jonathan sometimes ‘Jock’ or ‘Jacques’ Boyer. 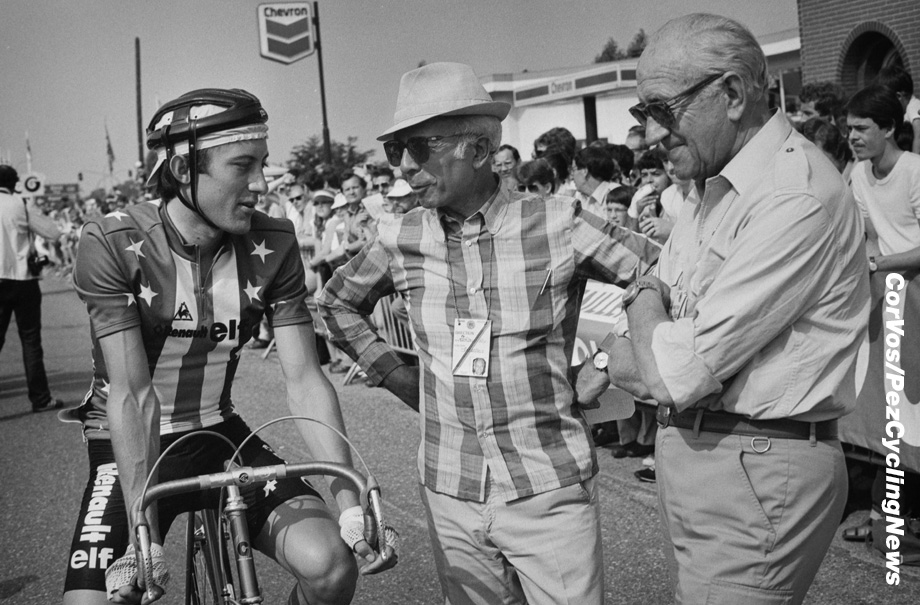 With the Tour bosses; Lévitan and Goddet

There may not be as many US riders in the 2021 Tour de France as there have been in some recent editions, but who was the first US rider to tackle the ‘Grande Boucle?’ 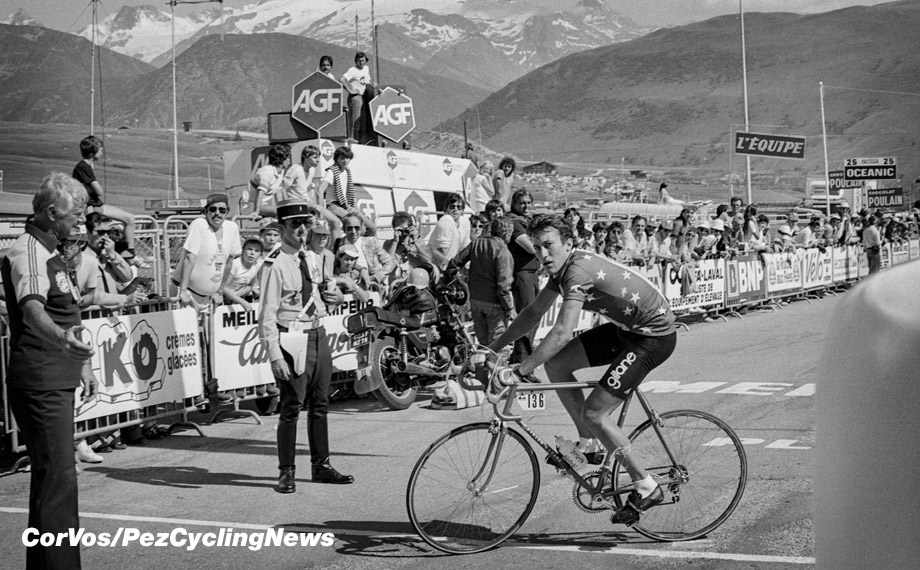 Utah-born Jonathan Boyer was that man, we caught up with him to discuss his career, at that time he was heavily involved in coaching and mentoring riders in Rwanda a country he still has close ties with.

There were other ‘Euro Dogs’ before Jonathan Boyer, but he was the first US rider to ride and finish the world’s biggest bike race, something he did on five occasions, with a 12th place in 1983 as his best finish. He won stages in the Tour de Suisse and Tour de l’Avenir and produced outstanding rides in the world pro road race championships on more than one occasion. Despite being very much an individual he rode as part of some of the highest profile professional teams of the era – Lejeune, Puch, Renault, SEM, Skil and 7-Eleven. 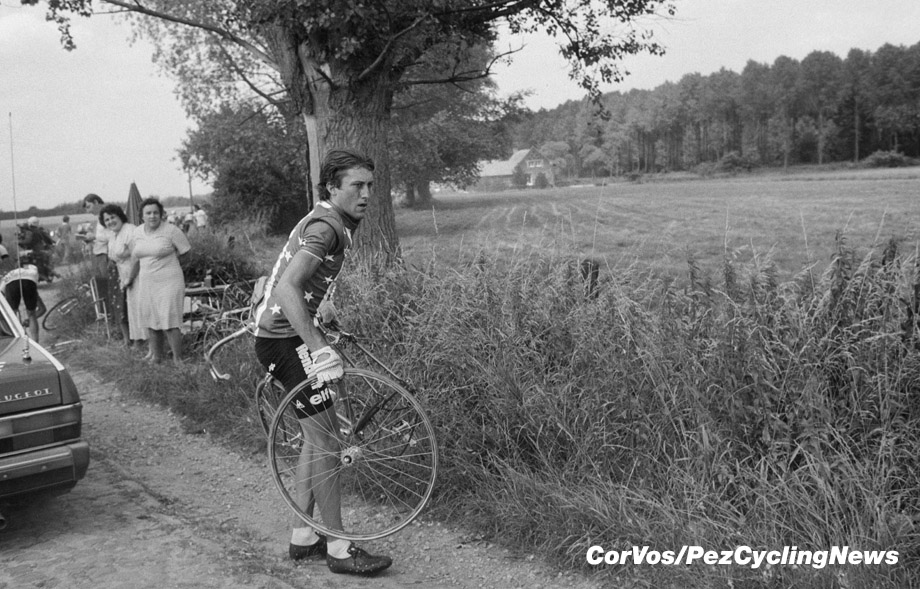 Puncture in the 1981 Tour de France

He revolutionised the Race Across America and in recent years has taken up the new role as coach and mentor to Team Rwanda. We caught up with man who originally hails from Moab, Utah just after the Tour of Rwanda.

PEZ: Rwanda – what are you doing there, Jonathan?
Jonathan Boyer: I’ve no idea! A friend invited me over to do a race here but I didn’t pick up on it, he asked me again the next year but this time sent me a plane ticket. That was September 2006; I saw the talent that was here and thought; ‘why not make a bike team?’ In February 2007 I started to do talent tests, saw that there were potentially good riders and began to attract sponsors. Our first race was the Cape Epic in South Africa, we kept getting sponsors and the team developed into the Rwandan National Team. 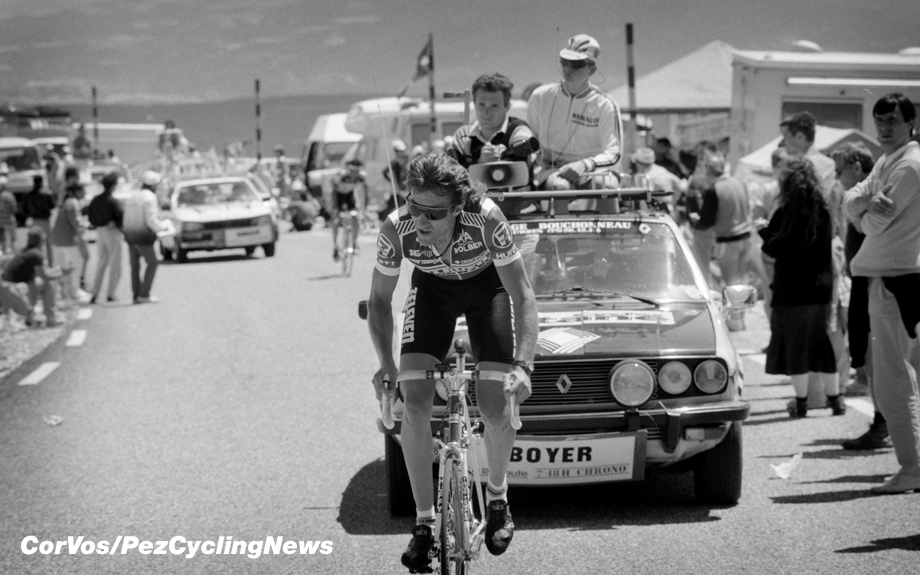 PEZ: Is it a safe place to live and work?
It’s the safest country in Africa; there’s a high security presence with police and the military but it’s perfectly safe to walk the streets. Theft can be a problem – remember that you are surrounded by people who have absolutely nothing – but violence tends not to be. 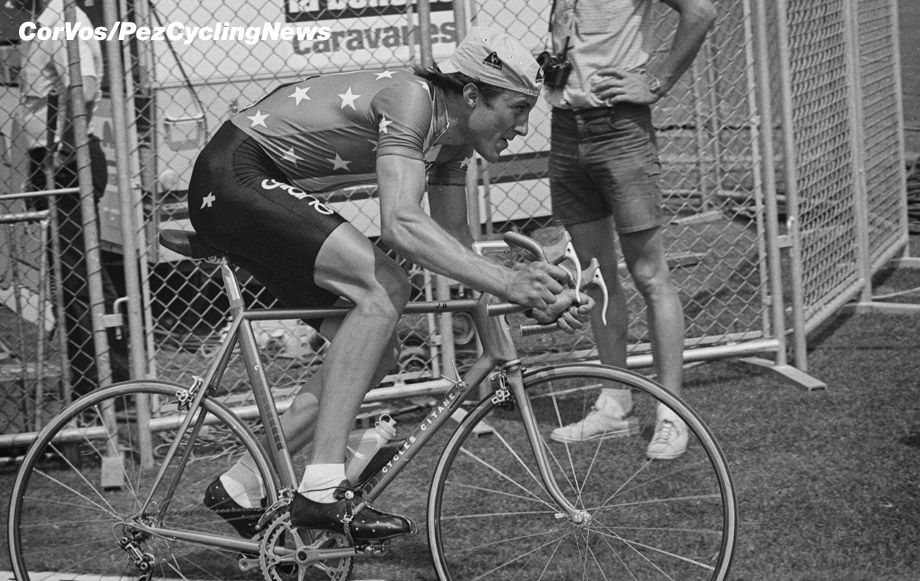 PEZ: Let’s talk about your professional career – how did you get a ride with the famous Paris amateur club, ACBB?
I got an address for an amateur team in central France, I rode for a junior team there, had a lot of wins and was talent scouted by ACBB in 1973; I rode for them for three years. 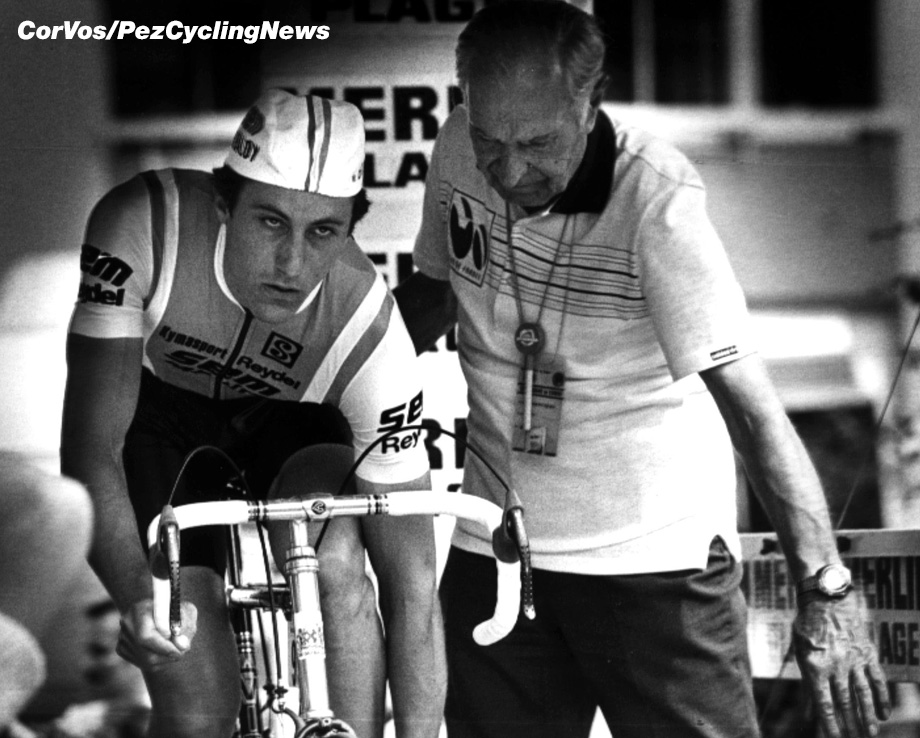 PEZ: ACBB was the Peugeot ‘feeder’ team but you turned pro for Lejeune?
ACBB weren’t acting fast enough for me; I wanted to turn pro so in 1977 I joined UC Créteil which had a direct link with Lejeune – I was pro by May, that was the deal I made with them. 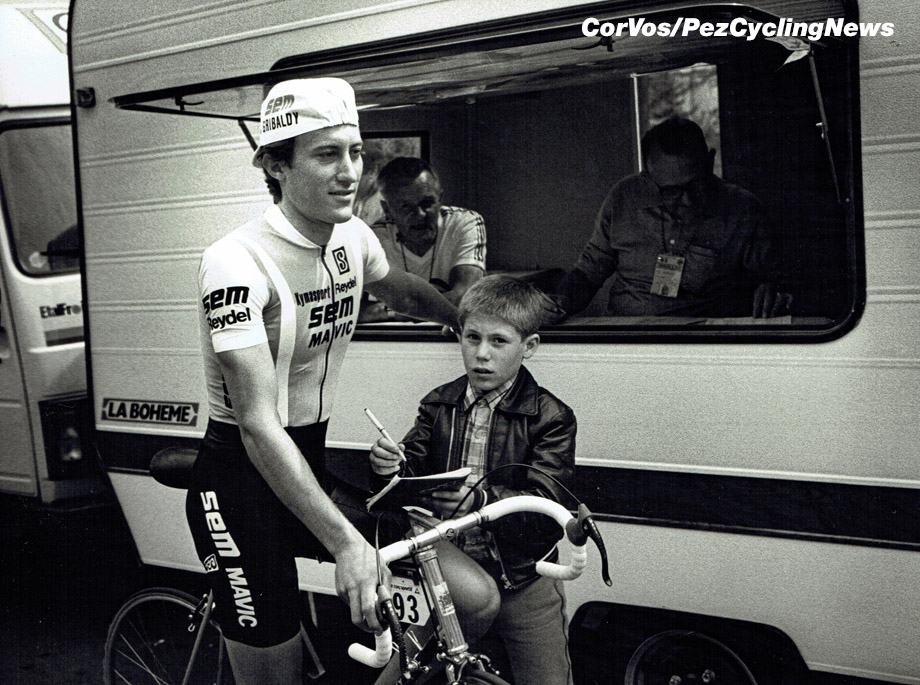 Autograph for a young fan

PEZ: You were in quite a few teams as a pro?
Yes, but with most of them – except Renault – I was under the directorship of Jean de Gribaldy, he was a very charismatic man; I actually lived with him at his house in Besançon for a spell. He had been a professional himself and rode the Tour de France. As well as his cycling interests he had a furniture business; he was an influential figure in business and in cycling. There’s a street in Besançon named after him. 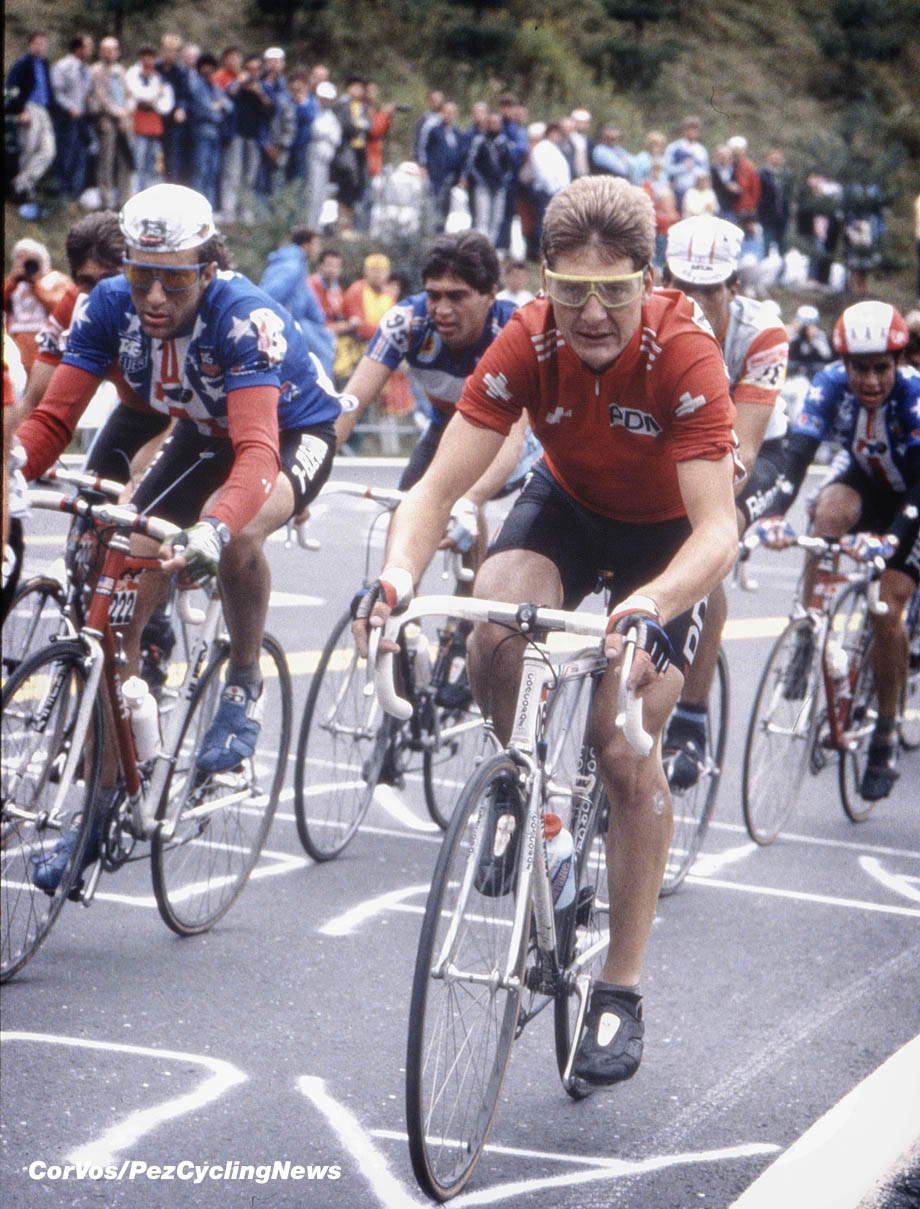 Worlds’87 next to Müller

PEZ: Which was your favourite team?
The three years at the end of my career with the US 7-Eleven squad, but I enjoyed my years with de Gribaldy.

The finalé to the Worlds in Goodwood

PEZ: The Worlds, Goodwood, England, 1982, I was there, you were worth a medal but Greg Lemond decided otherwise.
He chased me down coming into the finish – he told me later that he didn’t want to see any American other than himself winning. Greg won the Tour three times; there’s so much more he could do for cycling but he can be so negative – I don’t think he’s a happy person. 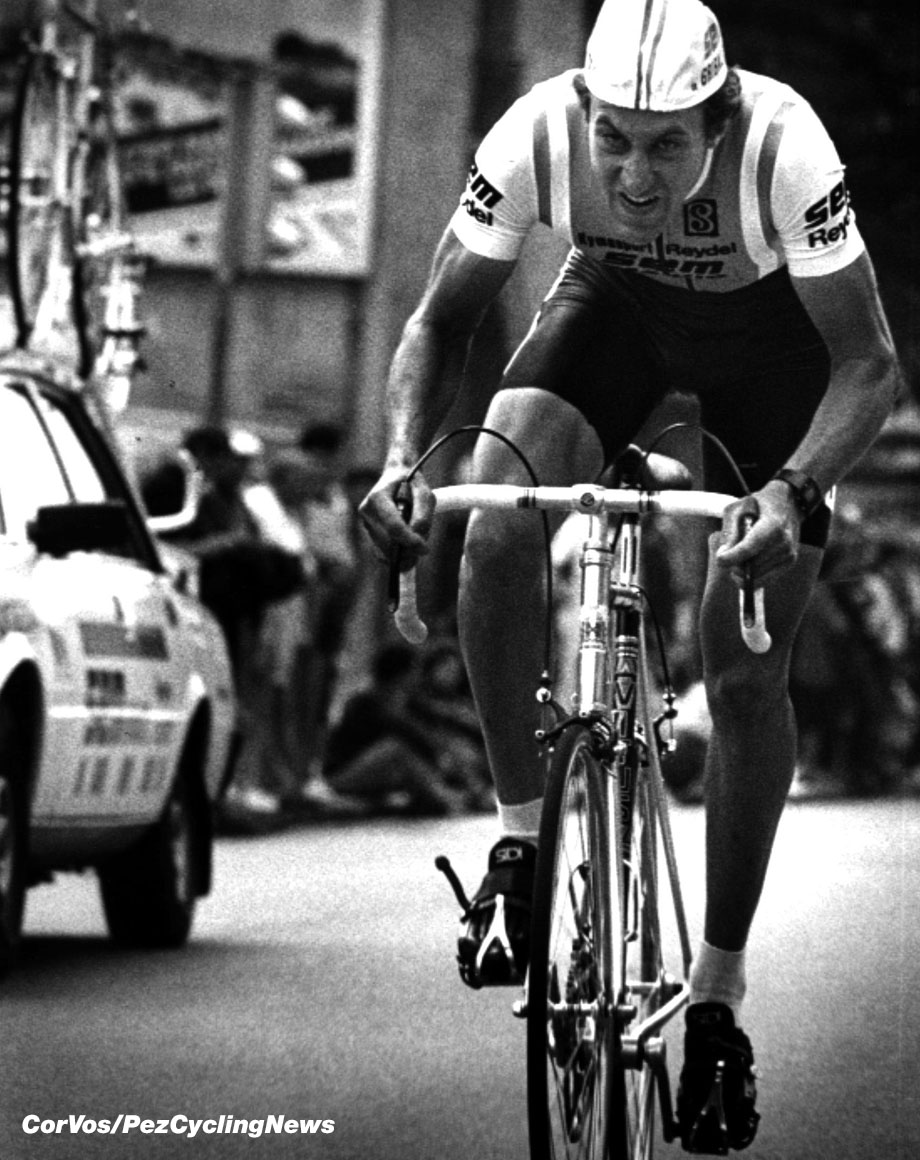 PEZ: You were fifth at the Sallanches Worlds in 1980, too.
I loved the Worlds, I used to try to peak for it but our training wasn’t as sophisticated back then – now you can tune an athlete to be on form for a certain day but back then it was more of a hit and a miss. 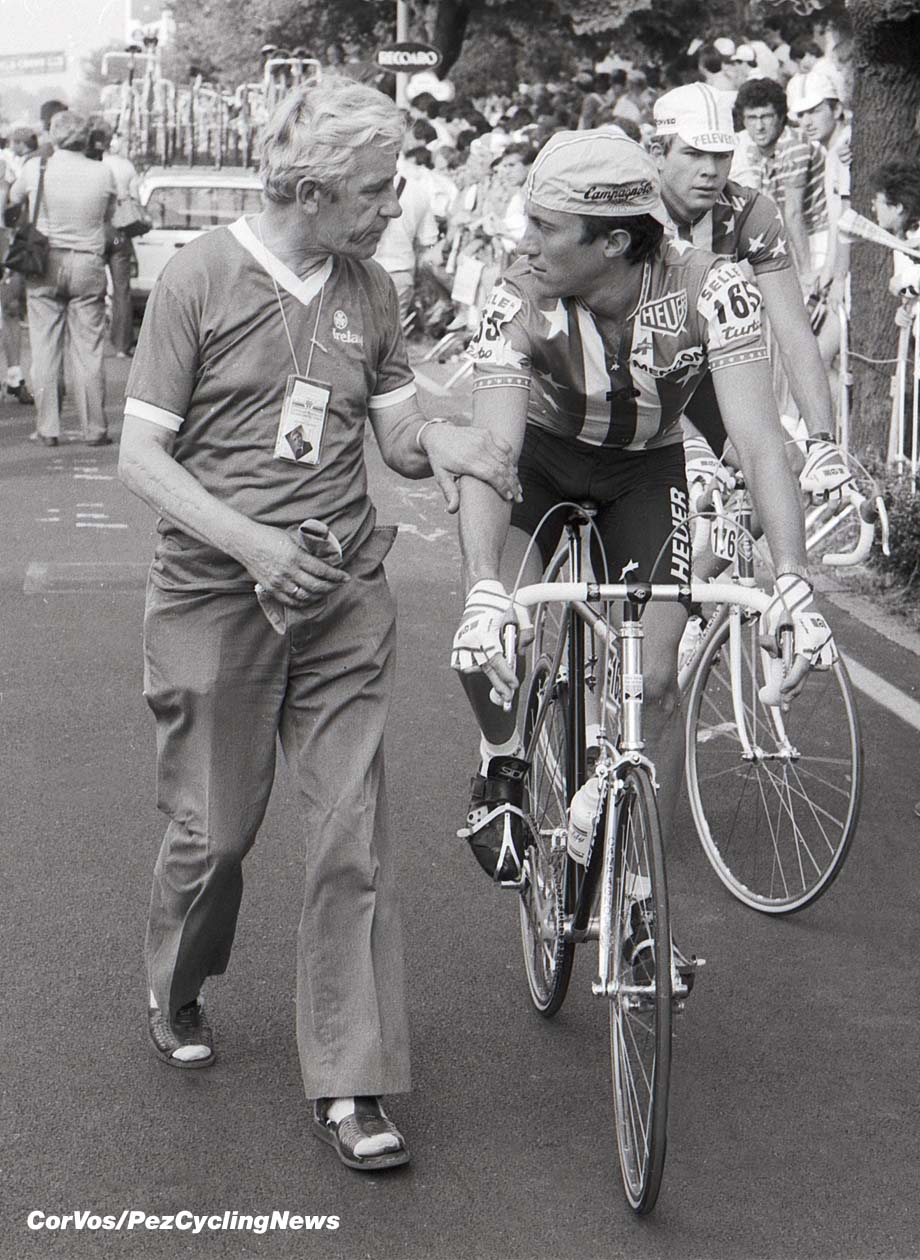 PEZ: Did your vegetarian diet cause you problems – with French teams, meat was the thing – raw minced steak for breakfast and all…
I wasn’t 100% vegetarian, I ate fish and chicken; it was a little bit of hassle but not too much. I used to take my own dried fruit and nuts over from the States – the Renault dietician checked out my diet and rated it ‘A plus,’ as good, if not better than the rest of the team. 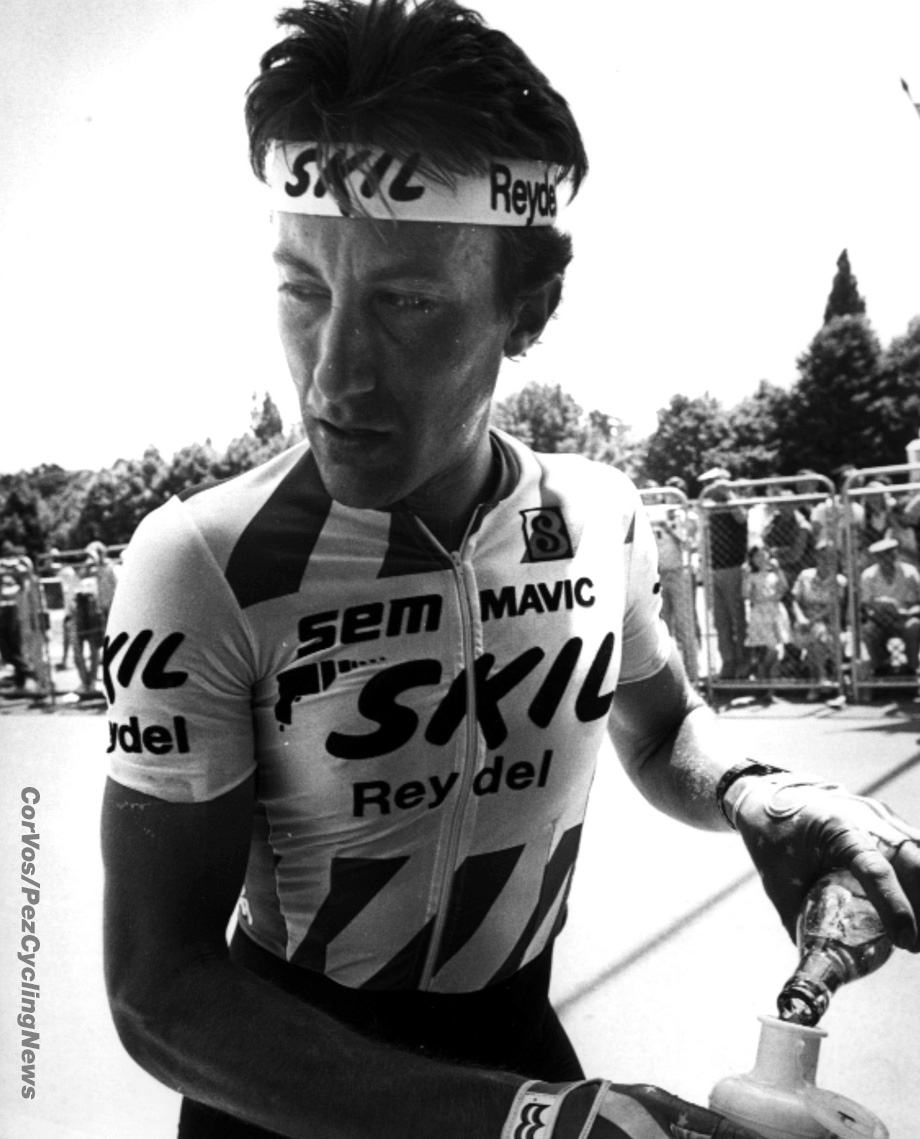 PEZ: Career highlights?
My ride in Sallanches, winning a stage in the Tour de Suisse, finishing top 12 in the Tour. . .

PEZ: You revolutionised the Race Across America, is it true you used an acupuncturist to help you get the best from your brief sleep periods?
Winning the RAAM would be another career hi-lite – yes I employed an acupuncturist, I also used their services when I was 12th in the Tour. 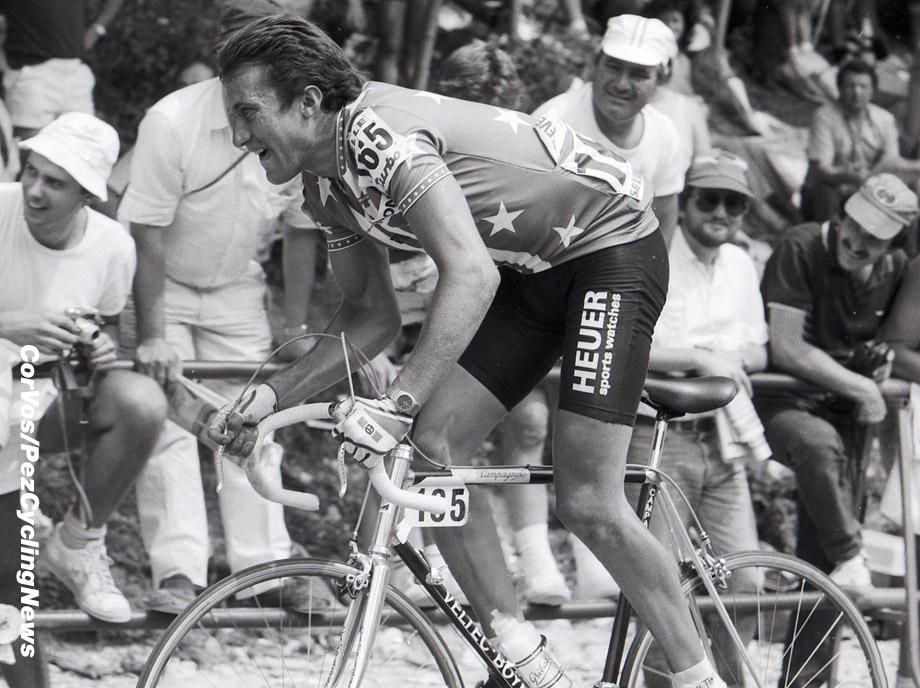 PEZ: Doesn’t the RAAM exact a toll physically and financially?
Yes, I still have nerve damage in my hands and feet – the pressure points; it wears on you more than any other race. As for the financial aspect – I was sponsored, so I guess you could say that I lost the least amount of money!

PEZ: Who impressed you most during your career?
Bernard Hinault and Sean (Kelly), but I was lucky because we were on the same team! 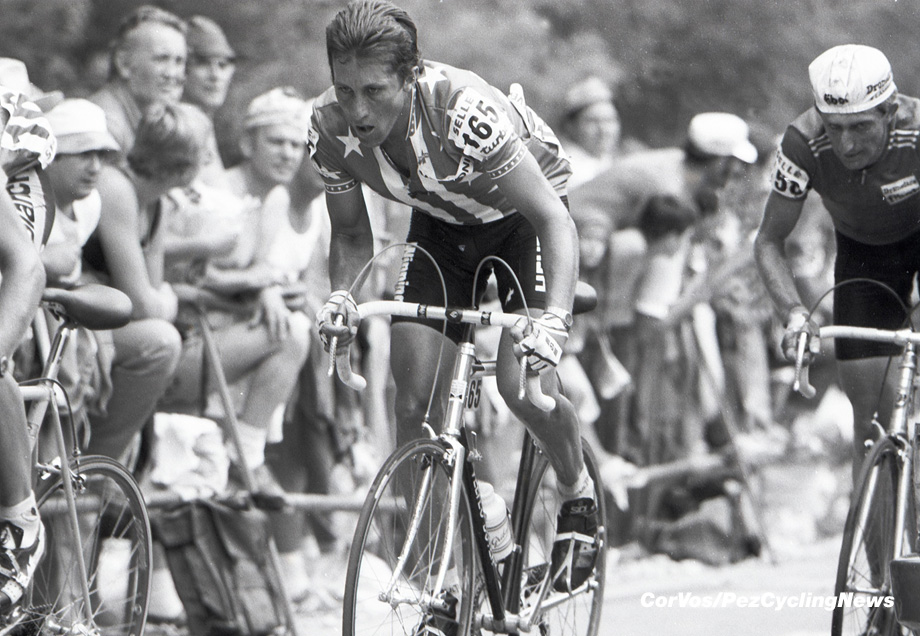 PEZ: Did you suffer from ‘post career blues?’
Definitely, the first six months to a year, yes, definitely – and there were hard times after that too. . . The last five years have been amazing, here in Rwanda I can use everything I learned in cycling and in my life to help people. A lot of riders here have no light or running water in their homes, dirt floors – you can help them develop as individuals, as a community and now, as a nation. The effects are real and you can see them happening before your eyes.

PEZ: Career regrets?
No, you can’t wish things had gone a certain way – it is what it is! 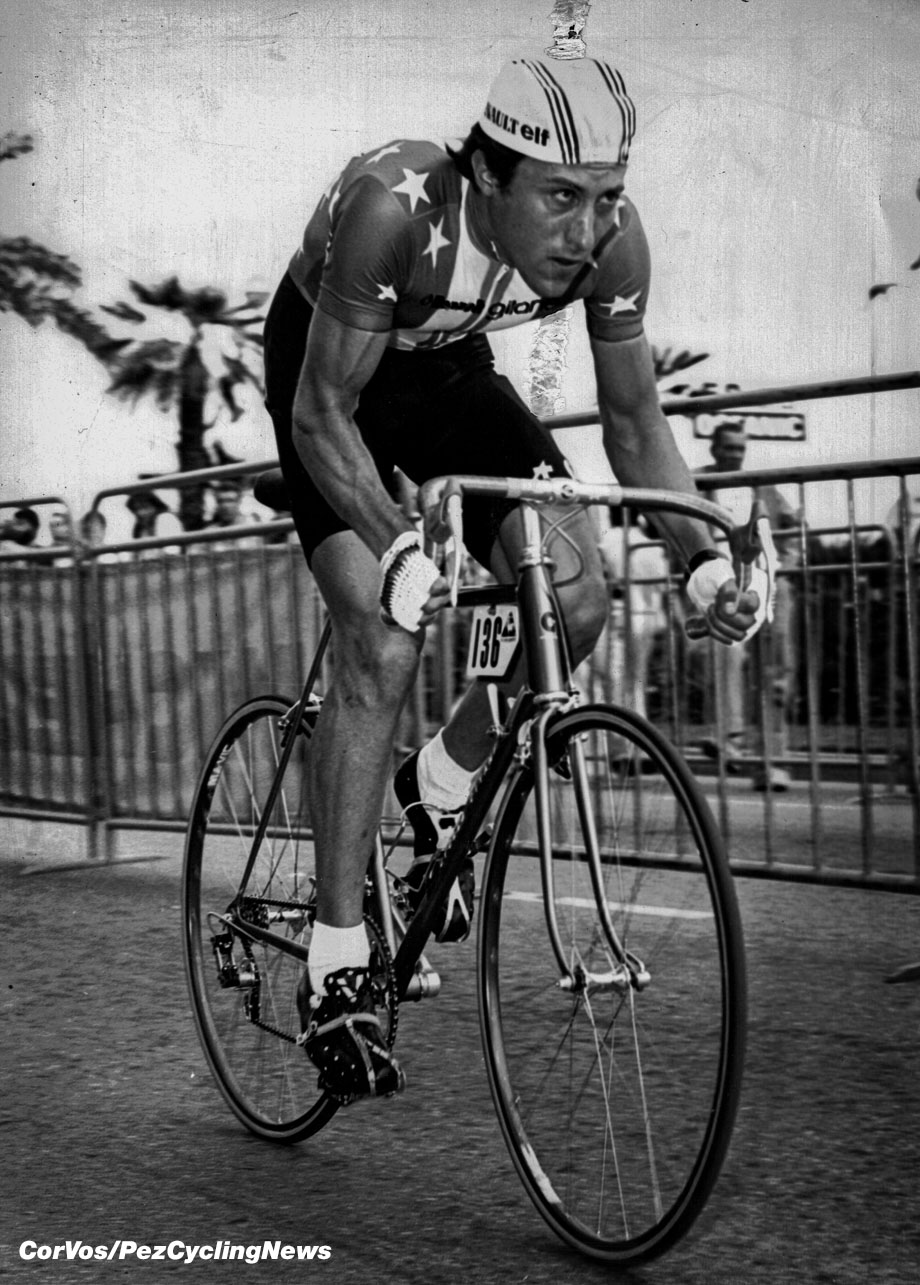 PEZ: What are your goals, now?
To see an African rider in the Tour – look at Daniel Teklehaimanot from Eritrea (Tour of Rwanda winner; African road, time trial and team trial champion); and to see a full African team in the Tour, one day. 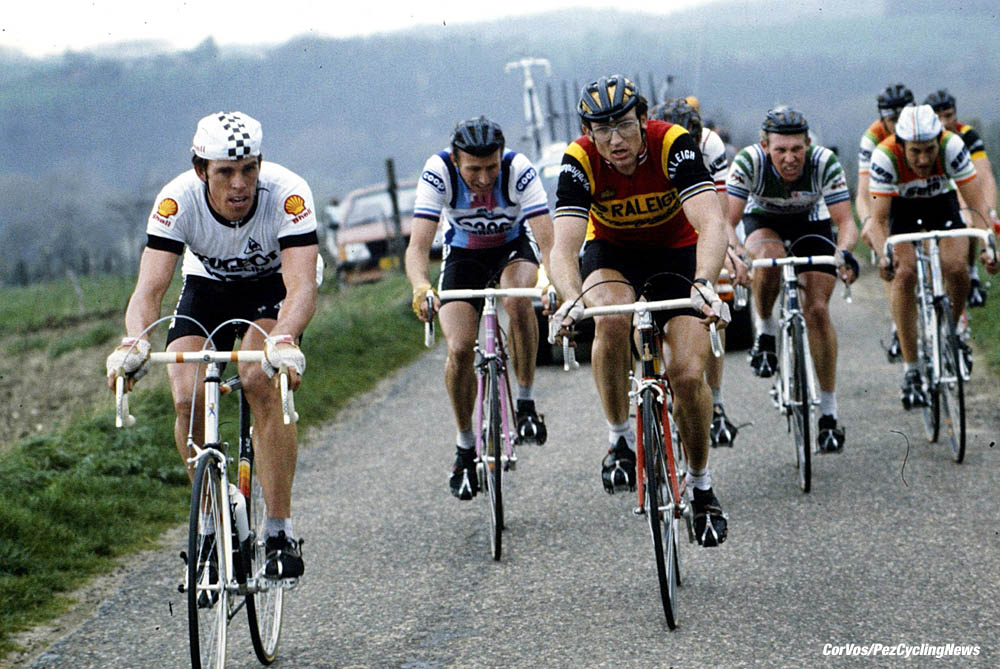 Amstel’83: In the break with Anderson and Raas was Joop Zoetemelk, Etienne de Wilde and Jonathan ‘Jock’ Boyer