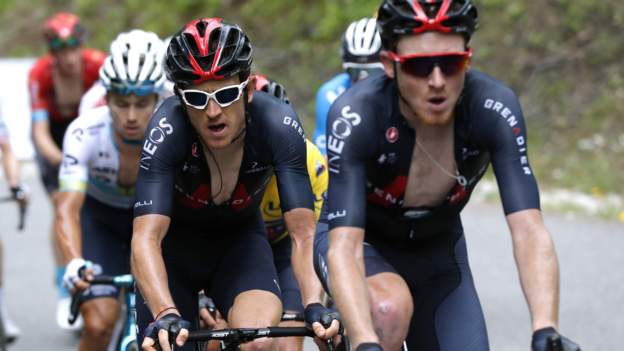 Last updated on 8 hours ago8 hours ago.From the section Cycling

Geraint Thomas says communication will be key for Ineos Grenadiers at the Tour de France if they are to beat reigning champion Tadej Pogacar.

After years of traditionally supporting one lead rider, the team has promised a “more open and aggressive” race with four riders who could be backed to win.

However, 22-year-old Pogacar remains the overall favourite to win again.

“I think having four guys that can be up there is great. It gives us cards to play later in the race,” Thomas said.

“It has its positives and negatives,” said Thomas, on the eve of his 11th Tour.

“We can’t get carried away and try to protect four riders because that would just be impossible and take too much out of the other four in that first week.

“Communication is the main thing. The good thing is there’s no egos in the team and that’s why we’ve been able to perform all season as we have so far.

“As long as we can all be in touching distance [of the overall lead], I think that’ll be a great strength of ours.”

The 108th Tour de France begins in Brittany on Saturday.

Three weeks and 3,383km later the peloton will arrive in Paris.

It is a long and gruelling race but Thomas believes the first week could have a big impact on the overall standings, with two hilly stages to start and a time trial on stage five.

“That first time trial will be big because in the mountains there are obviously differences [between riders] but in the TT there’s definitely bigger gaps between some of the pure climbers and the better time triallists.

“Even if gaps aren’t there, there’ll still be a lot of guys who have used up a lot of energy – mental as much as physical.

“So that’ll still affect everyone coming into the final week.”

Thomas believes he is showing the most consistent form since his famous Tour win back in 2018.

The 35-year-old has won the Tour de Romandie, taken a stage win and third overall at the Criterium du Dauphine and come third at the Volta a Catalunya so far this season.

It has been a strong showing following a disappointing (and Covid-affected) 2020, in which he was not selected for the Tour de France and withdrew from the Giro d’Italia after only three days following a crash.

The Welshman, who made his Tour debut in 2007 and is riding in his 11th Tour, hopes his experience will help him overcome a new wave of young cycling talent.

“I think I was in pretty good shape for the Tour in 2019 and I was in great shape last year for the Giro,” he said, “but I didn’t get to show that.

“But as a season goes, it’s the best consistent form I’ve shown since then and I’ve just been enjoying it.

“It’s just a case of racing as best I can. I feel in good shape and that experience hopefully will give me a slight edge.”

Just six days after the Tour de France comes to an end, Thomas is due to line up for Team GB in the men’s road race at the Olympic Games in Tokyo.

He acknowledges the excitement of going to his fourth Games.

But that is still more than three thousand kilometres of racing away. His focus for now is on nothing more than the Tour.