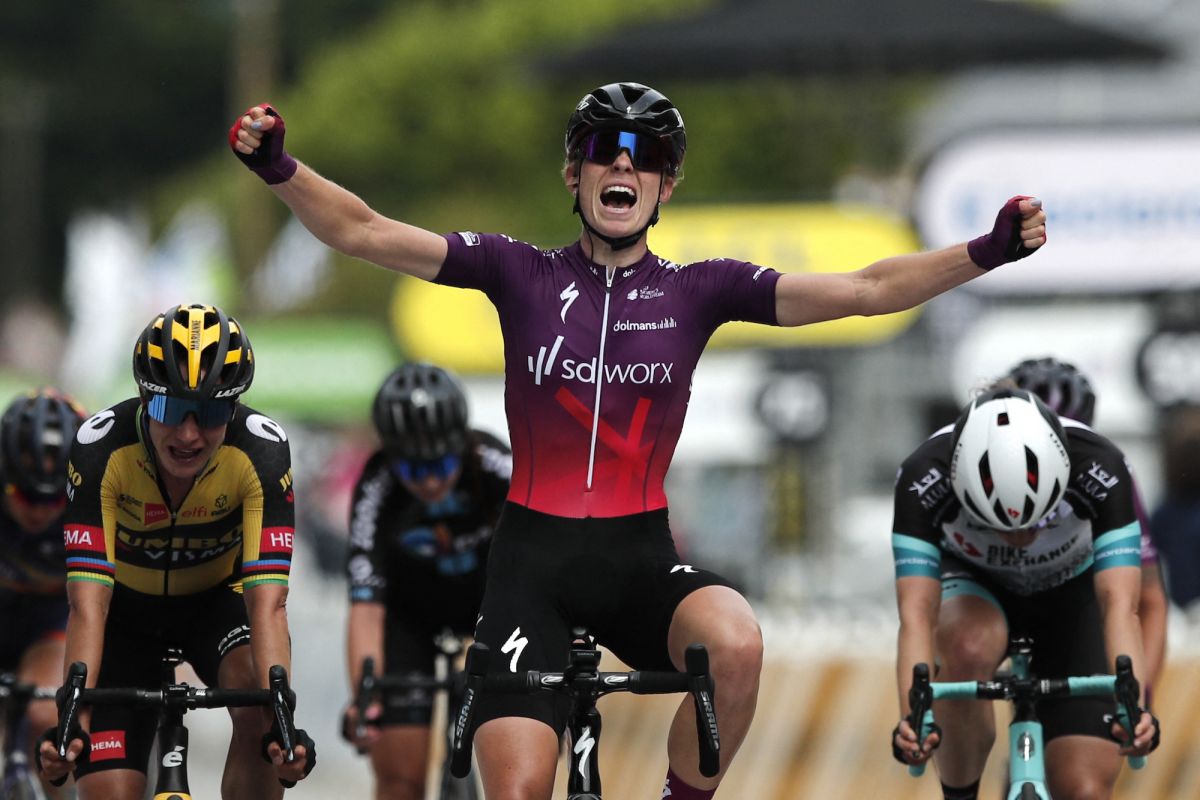 Another breathless edition of La Course was won by new Dutch superstar Demi Vollering after excellent work from her SD Worx squad.

The 24-year-old was barely visible throughout the race, hiding in the wheels, coming to the fore only in the final where world champion and team-mate Anna van der Breggen led her out. Patient, Vollering sat on the wheel of Jumbo-Visma’s Marianne Vos who finished third, with Cecile Uttrup Ludwig in between in second place.

The race never settled, with action throughout the nearly three hours, and a 12 woman breakaway was only caught in the final four kilometres. Canyon-SRAM set up the final climb with an attack from Tiffany Cromwell with Kasia Niewiadoma leading a group of seven up the climb, but the pace eased and another group seemed to be coming back.

>>> Tour de France live: Updates from the punchy opening stage in the 2021 edition

With 500m to go Van der Breggen kicked hard, forcing Vos to follow and use her kick too early.

Vollering has improved immensely since joining SDWorx at the start of the year. On Saturday she clearly learnt from earlier mistakes, turning the tables on Vos after losing out to her compatriot at Amstel Gold Race.

She now also leads the individual standings of the UCI Women’s WorldTour.

Created in 2014 as a precursor to a full women’s stage race, La Course began life running alongside the final stage of the Tour de France on the Champs Elysées, Marianne Vos winning the opening edition.

Despite the clamour, a stage race failed to materialise until the recent announcement that the Tour de France Femmes would finally happen in 2022, so this year’s La Course has special significance as possibly the last.

Starting at 8.20 am riders were forced from their beds in the middle of the night to ensure they were properly prepared for what is one of the highest-profile races in the women’s sport. And they were to take on a 107.7km race in the rolling Brittany countryside.

Rolling out of Brest for an opening 54km leg, they joined a circuit of 14km which they would ride in full three times, including the ascent of Côte de la Fosse aux Loups, a 3.1km climb with ramps of 14%, the finish coming after 1000m of false flat.

The opening kilometres were punctuated by attacks from Stade Rochelais-Charente Maritime and Arkéa teams, the French squads showing themselves in their home race. Of the WorldTour teams SD Worx were most aggressive, 2018 world champion Chantal van den Broek-Blaak constantly attacking.

It was one of the French teams who were successful in getting away though, Arkéa’s Cedrine Kerbaol building a lead of one minute. Not for long though, as teams tried to get across before arriving at the closing circuit.

Eventually, the young French woman was joined by Elena Pirrone (Valcar Travel and Service), and while that brought the gap down it extended back out to 50 seconds, with Lara Vieceli (Ceratizit-WNT) chasing in between.

On the climb for the first of four ascents, Kerbaol was dropped and Pirrone crossed the line with a lead approaching 30 seconds as the thinned peloton became increasingly nervous behind.

On the descent that nervousnesses became action as Lucinda Brand (Trek-Segafredo) led an attack, catching Pirrone and forming a group of 12 at the front.

But as they reached the bottom of the climb for the second time Van der Breggen attacked the bunch, dragging it across to the leaders, only for another group of 12, including some of the same riders to head up the road.

With all the biggest teams represented in that leading dozen, the peloton relaxed and the gap went out to 1.10 as they headed onto the climb for the penultimate time. However, once again that brought action, French champion Evita Muzic attacking the bunch when her FDJ-Nouvelle Aquitaine Futuroscope team-mate, Brodie Chapman was temporarily distanced from the leading group.

Muzic was left stranded in no-woman’s-land though and she was caught with eight kilometres remaining, with the gap to the front them at 40 seconds, making for a tense final. However, when Jumbo-Visma came to the front on the final approach to Landerneau and the climb the gap tumbled, the leaders caught just before they hit the final ascent of the climb.