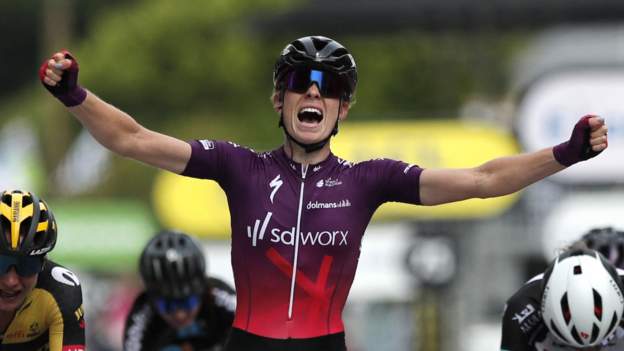 Anna van der Breggen made a strong attack before Team SD Worx teammate Vollering took the title in a tense finish to the 107.7km race.

Britain’s Lizzie Deignan, who edged out Vos to win in 2020, finished ninth.

It is the continuation of a stellar season for Vollering, who won Liege-Bastogne-Liege earlier this year before second-place finishes at Amstel Gold and Brabantse Pijl.

While Jumbo-Visma’s Vos looked strong in the closing stages, Vollering emerged from her compatriot’s slipstream to take the win with a time of two hours 50 minutes 29 seconds having been led out by SD Vorx team-mate Van der Breggen.

“I was not expecting that from today,” said Vollering. “I was really looking forward to today, but it was an awesome race.

“[Van der Breggen] did it again because Vos was going all the way to the right, I was a little bit stuck but Anna forced Marianne to go and I could go in Marianne’s slipstream.”