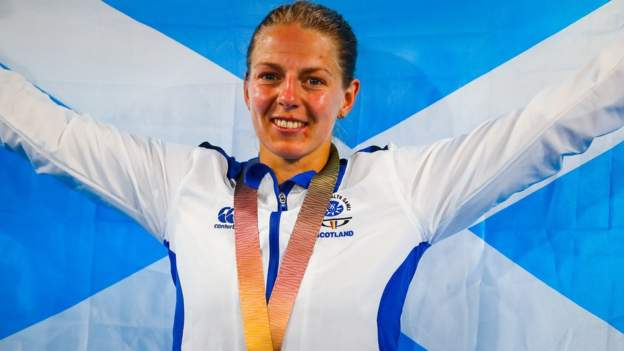 At the time Team GB were racking up 12 cycling medals at the Rio Olympics five years ago, Scotland’s Neah Evans was still a practising vet and yet to make her mark at the elite level of the sport.

Now she is aiming to step on to the podium herself after being named in an Olympics squad for the first time at the age of 30.

Aberdeenshire-based Evans feels ready to make her mark in Tokyo despite admitting to be being “a relative newbie” in the sport she only took up seven years ago.

“Quite a lot of my team-mates, this is their second Olympics or their third Olympics, but it is something they have dreamed about from being 10 years old,” she told BBC Scotland. “Whereas, because I got into it so late, it is a bit of a whirlwind.

“It is pretty cool that it has actually happened. When I started cycling, it was just, ‘this is great fun, let’s see how far I can make it as a cyclist’. I only started endurance training in 2016, which was when Rio was, when my team-mates were winning a gold medal.

“I got on to the programme but I was working as a vet until 2017 and, when I got my trial at British Cycling, I had never done team pursuit.”

Evans has made up for lost time, accumulating four European Championship gold medals, a World silver and a silver and bronze at the Commonwealth Games.

Now she is eyeing similar success as part of Team GB in a sport she only took up at the suggestion of her dad after suffering injury while hill running.

“It means a huge amount,” she said. “It is one of these tricky things because British Cycling has such a huge reputation of coming home with medals, so when you are part of the squad, it is not about participation – it really is going there to come back with a medal.

“So to get selected is huge, but obviously it comes with quite a lot of pressure as well.”

Evans hopes she can be an inspiration to those who think, “I will never be any good because I’m older”.

“Age is just a number,” she said. “For cycling, it is very much time in the sport and if you want it and you are prepared to work then your age shouldn’t hold you back.

“A lot of people think, with elite level sport, you have to start really young. If you are 15 or 16 and you have not found your sport, well, that is it, you are too late – and I have definitely been lucky and fortunate to have had a lot of help and support along the way.”

‘I wish my mum had the support I got’

Evans’ mother, Ros, competed in cross country skiing at the 1984 Winter Games in Sarajevo. But the cyclist expects her own Olympic experience to be “hugely different” – and not just because of the contrasting nature of the sports involved.

“Obviously Summer-Winter Olympics, but her whole build-up, the whole process, she was very much a self-supported athlete,” she explained.

“She was based out in Norway, but she worked at a ski centre, so she would do some morning chores and then she would go out and train, but she wasn’t supported a fraction of the way I am.

“Sometimes I feel a bit sorry for her because you think, ‘you clearly were a brilliant athlete yet you have not had a fraction of the chances and the support that I received from British Cycling’ and think, ‘I wonder how much more you could have achieved if you had some more support’.”

That support could be about to create an Olympic medallist out of someone who only realised cycling was “really fun” after taking it up “just to get my dad off my back”.