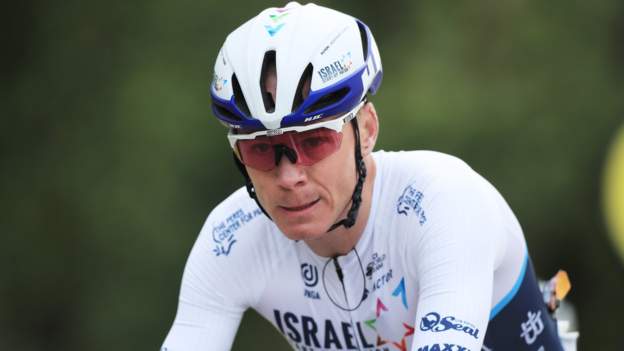 Chris Froome says he will “try get through” the second stage of the Tour de France on Sunday after being injured in a major crash on the opening day.

The Briton, a four-time Tour de France champion, was among the worst affected when more than 50 riders came to grief 8km from the end of stage one.

Scans showed he avoided any fractures, but Froome said he is suffering from “a lot of swelling and bruising”.

“I’ll try to get through today, just survive today’s stage and hope that over the coming days it starts to feel better.”

Froome, 36, said the incident, which saw him hurt his left leg and chest, was “carnage”.

“That was definitely one crazy stage,” he said.

“One moment everything was fine heading towards the finish in the last 10km, at 60-70km/h, then a touch of wheels in the peloton and it was carnage with 50 or 60 riders on the floor.

“Unfortunately there was nowhere for me to go. I braked as hard as I could but I just went into the back of the guys who crashed in front of me.

“I spent the whole evening in the hospital, but all’s good.”

Froome finished stage one 14 minutes down on winner Julian Alaphilippe.

The seven-time Grand Tour winner, riding as a domestique for an Israel Start-Up Nation team led by Canadian Michael Woods, has been trying to regain form since suffering multiple fractures in a crash in 2019.

He recently said he did not expect to be competing for victory at the Tour this year after spending the early season working as a domestique.