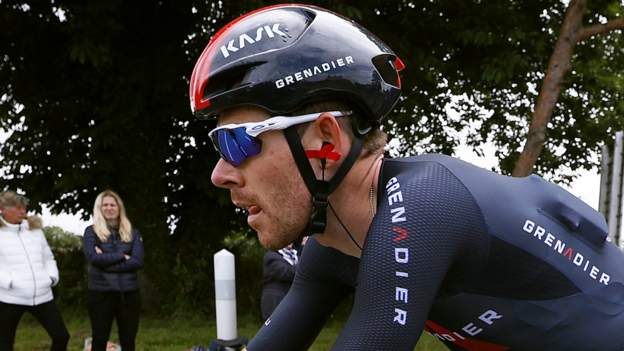 Rowe had dropped back to help Ineos Grenadiers colleague Geraint Thomas, who injured a shoulder in a crash.

After the £235 fine and 20 UCI points were imposed, Rowe tried to explain events.

Thomas was treated for dislocated his shoulder early on in the 182.9km stage, one of several such incidents on the day.

With the help of Rowe and more Team Ineos riders, Thomas made up a three-minute-plus gap to regain contact with the peloton.

Thomas’ condition will be reassessed ahead of stage four while Rowe may be mindful of events in 2019 that led to his expulsion from that year’s race.

Rowe posted: “We were 3 mins behind chasing with G [Thomas} after the crash. Normally under the circumstances you get some help from team cars. The jury allowed us nothing. When we finally returned to the peleton (sic) I spoke to the jury and said this was not correct under the extreme circumstances of a nasty crash and a mangled shoulder.

“I shouted at the jury and said some words i shouldn’t of (sic). There ya have it, peace out ✌️ #chill.”