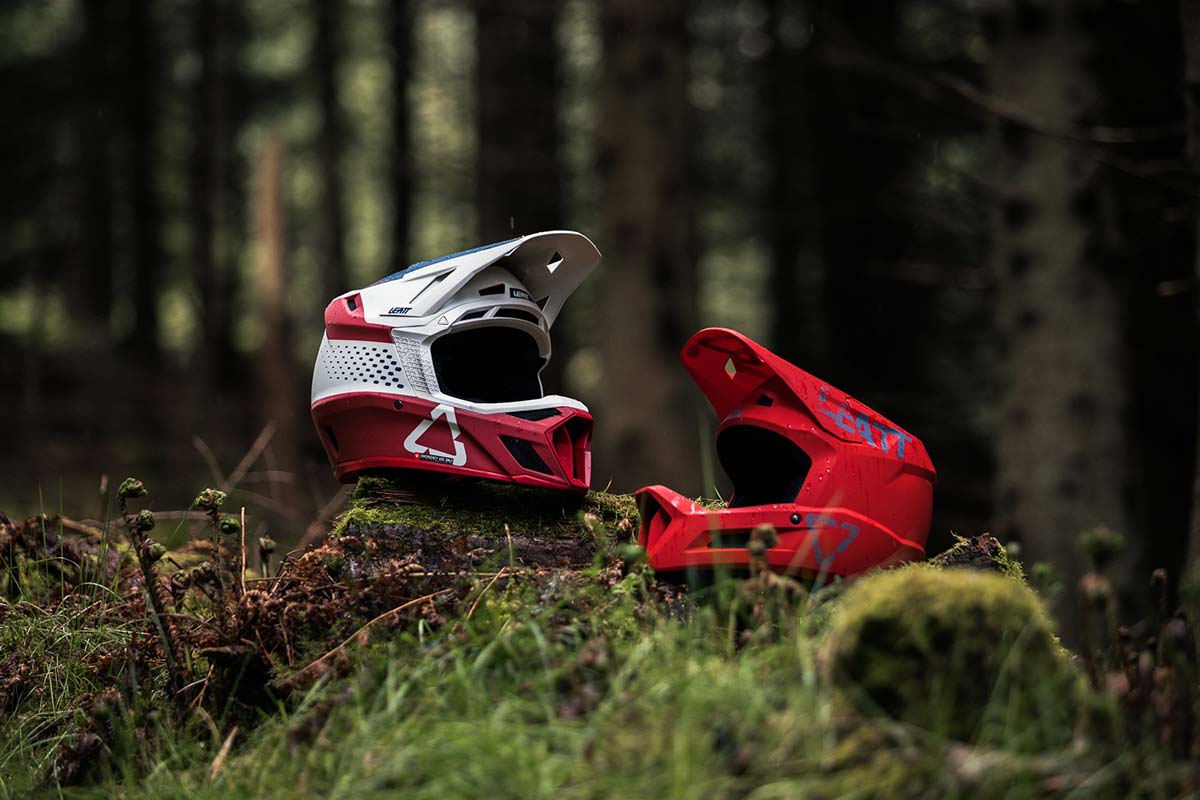 Earlier this year, South African protection brand Leatt released two new downhill helmets at complete opposite ends of the budget spectrum. The Leatt 1.0 DH retails at $99 while the Leatt 8.0 DH has an eye-watering asking price of $349. Both feature Leatt’s proprietary 360° Turbine Technology, and both are certified to meet the usual ASTM Downhill safety standards. What, then, warrants the almost 3.5-fold price difference?

First up, while both helmets are downhill racing certified, the Leatt 8.0 DH also passes the test for use on a motorcycle. That, at least, tells you something about the robustness of this helmet. It actually has a number of features that look more at home on a motocross helmet. We’ll get to those later.

There is a caveat to the above table: The Leatt 8.0 DH helmet actually passes the ECE 22.05 test for off-road motorcycle use, too. However, they don’t officially certify it for that.

Both the 1.0 and 8.0 DH helmets are available in sizes XS-XXL, with three shell sizes serving that range. The 1.0 is considerably lighter and smaller than the 8.0, which may make it a better option for the lighter, younger rider (depending on how pinned they are).

Here’s the caveat with this review, that of course applies to all helmet reviews ever written. While we can discuss fit, comfort, weight, safety technology, ventilation, etc., we can never actually comment on how well the helmet will protect us in a crash.

We rely on the outcomes of the standard safety tests for that. Without further ado, here’s what I’ve learned about the Leatt 1.0 DH and 8.0 DH helmets, without repeatedly smashing my head into the ground while wearing them.

As mentioned, both the budget-friendly Leatt 1.0 DH and top-end Leatt 8.0 DH helmets get the 360° Turbine Technology; Leatt’s patented rotational impact protection system. Disc-shaped turbines made of Armourgel, a non-Newtonian polymer that can absorb energy, are strategically placed along the inside of the helmet’s EPS liner. So, when you put the helmet on, they are positioned directly against the skull.

MIPS is a more well-known technology that also reduces the risk of rotational impact-induced concussion, but Leatt reckon the 360° Turbine Technology does it better. They say the technology reduces rotational acceleration by 40% and reduces linear g-forces by 30%.

It’s actually really impressive to see this on the $99 1.0 DH helmet, as not many downhill lids at that price point feature any rotational impact protection technology.

Here, there lies a key difference between the 1.0 and 8.0, however. Whereas the 8.0 features eleven Turbine polymers in the shell, the 1.0 gets just eight of these. Leatt say the number of these is simply related to the space available inside the helmet, taking into account the placement of vents.

Fancy technology aside, it is of course the shell and its EPS foam that is principally responsible for protecting your skull, and brain, in a crash. Here’s where we see the biggest difference between these two downhill helmets. Measuring from the inside face of the EPS to the outside edge of the shell (just above the rider’s ear), the 8.0 is twice as thick as the 1.0. We measured it at just over 4 cm thick whereas the 1.0 was around 2 cm thick.

This is where the vast majority of the weight difference arises. Leatt have tried to keep the weight of the 8.0 down by using a composite shell with carbon parts as opposed to the polymer shell seen on the 1.0. We weighed it at 1098g in size small, and are struggling to find reasonable comparisons with other small DH composite shell helmets on the market (because most manufacturers quote the weight for a medium).

There’s little point investing a significant sum of money in a helmet if it simply doesn’t fit properly. I can give you a detailed account of how the helmets fit my head, but this cannot and should not replace you actually trying them on yourself. Leatt have several high street retailers in the US where you can try before you buy.

Preamble over, how was the fit of the 1.0 DH and 8.0 DH helmets? I measure my head circumference at 54cm-55cm. Finding myself between helmet sizes, I opted for the S over the XS as I have a fairly round head. Turns out this was a great decision, as the 1.0 helmet was a very snug fit indeed.

Both helmets fit well enough that I feel I’d be well protected during an impact, but there were notable differences in fit and comfort. Despite both being recommended for 55cm-56cm head circumferences, the 1.0 was a significantly tighter fit than the 8.0, but not uncomfortably so.

With the 1.0, I felt a quite tight evenly distributed pressure around the top of my head. It is tight at the jaw line, too. I did note an absence of pressure at the base of my head (the occipital region), however.

That compares to the 8.0 which, while still snug, didn’t feel quite so tight. It is certainly the more comfortable and better fitting of the two helmets, with the base of the comfort liner at the occipital region resting flush against the back of my head. This ProFit liner can be removed for washing.

Both the 1.0 DH and 8.0 DH work seamlessly with Smith Squad googles. I did try both helmets with the Leatt Velocity 4.0 goggles (with ventilated strap), but I personally find the goggle frame too big for my face, finding it pushed down on my nose, closing my nostrils. Not ideal!

Speaking of vision, the 8.0 DH helmet is superior here, too. The top of the chin portion sticks up slightly more on the 1.0, hiding more of what is directly in front of you. I’m not someone who tends to stare at my front wheel as I ride.

That said, I probably do subconsciously take in some visual cues from the trail directly in front (and slightly below) me, hence my awareness of how the two helmets differ in this respect. This was most pronounced when riding small jumps, looking for a landing.

The helmets both have a pronounced lip at the rear, serving to hold the goggle strap securely, preventing it from slipping up and off the back of the helmet. Both get the classic motorcycle-style D-Ring closure chin strap.

We’ve pretty much covered everything the Leatt 1.0 DH helmet has to offer. Here’s where things get interesting (and a bit weird) for the Leatt 8.0 DH helmet. With this top-end composite shell lid, Leatt have thought beyond the impact of the crash, to the moments afterward.

The 8.0 DH is compatible with an eject system, seen more commonly on motocross helmets. In fact, it is specifically used in MOTO Supercross in the US, but Leatt decided to include it on the 8.0. It’s an inflatable bag that sits in the place of the sticky tab shown above. In the event of a bad crash, the bag can be inflated in order to easily lift the helmet off the head without pulling on the rider’s neck.

Another part of the eject system relies on the easy removal of the cheek pads. These have tabs on them that allow them to be pulled out from the bottom without actually removing the helmet from the injured rider’s head.

This should make it easier for the injured rider to eventually pull the helmet off, or (worst case scenario) the emergency services to do it for them in the case of a suspected spinal injury.

The final interesting feature on the Leatt 8.0 DH is the fact that it is hydration compatible; again, something more commonly seen in motocross. The helmet doesn’t come with this, but you can buy a Leatt Helmet Hydration System aftermarket. It is effectively a fancy hose that is routed through the left hand underside of the helmet to a mouth piece that sits roughly where the rider’s mouth is.

It connects to a hydration bladder that can be mounted onto the back of some of Leatt’s neck braces. It’s hands-free, so you can drink on the go without reaching for a water bottle.

Which one should you get?

If the budget permits, I’d always, always recommend a higher-end helmet over a budget option. Life is full of compromises, but should the safety of your brain be one of them? The Leatt 8.0 DH is irrefutably the safer option here. I’m not referring to the frilly bits such as the hydration system compatibility, or even the eject system (though it would be useful post-crash). My recommendation is related principally to that extra thick multi-density EPS that will absorb far more impact force than the thinner EPS seen on the 1.0 DH.

There is another side to the coin, however. We can’t all shell out $349 on a new Downhill Helmet, in the knowledge that it is going to need to be replaced if we drop it, or crash while wearing it, or in five years’ time (whichever comes first). While far from the robustness of the 8.0, the Leatt 1.0 DH Helmet is a very good budget-option if your wallet is forcing you down that route. It is the cheapest DH-certified helmet we know of to include some form of rotational impact protection technology, something I now refuse to ride off-road without.

The Leatt 1.0 DH and 8.0 DH full face mountain bike helmets come in sizes XS to XL, covering head circumferences of 53cm to 62cm. Both are available now from Leatt dealers. Head to the Leatt website to check out the other colorway options.