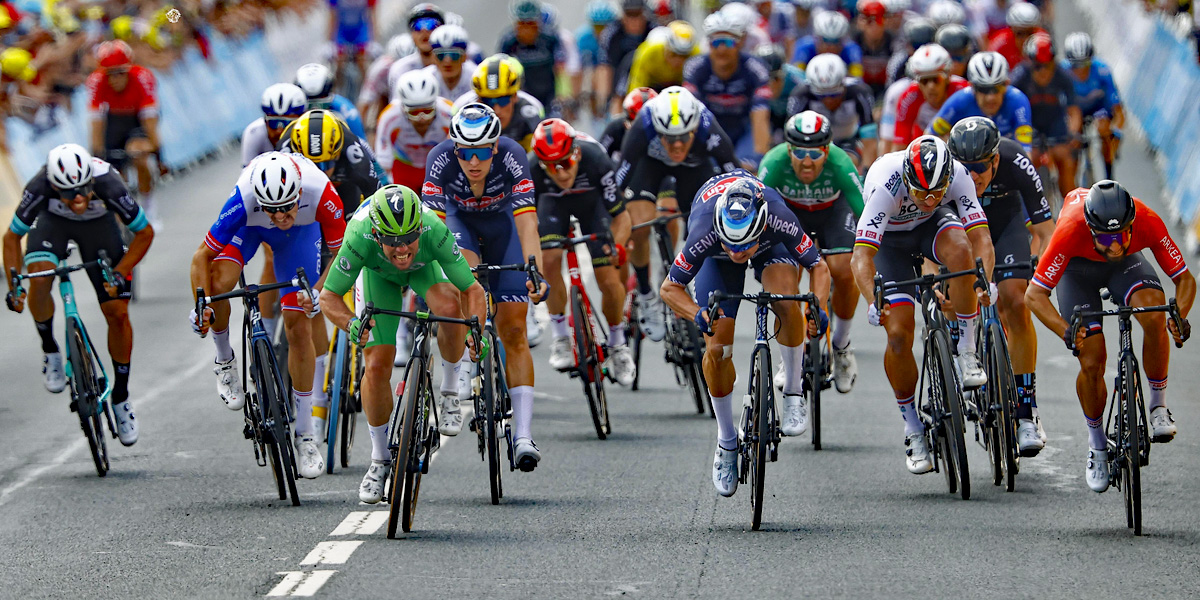 Stage Report: There was a crazy start and finished to stage 6 finishing in Chateauroux. After failed break attempts, the race settled down, but there was a wild sprint finish on the menu. With some ‘ducking and diving’ Mark Cavendish (Deceuninck – Quick-Step) took his second stage win of 2021 and his 32nd of the Tour de France. 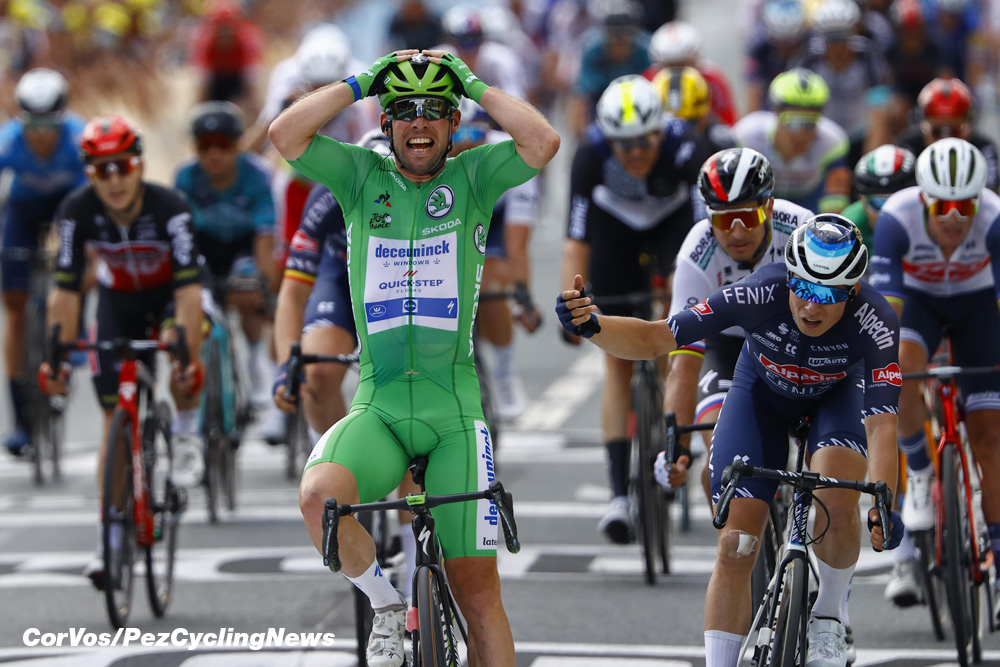 A repeat celebration for Mark Cavendish

– The final kilometre of Stage 6 and read our full report and pics below:-

The sixth stage of the Tour de France, finishing in Châteauroux, was won by Mark Cavendish. The British sprint bomb of Deceuninck – Quick-Step was the fastest in the sprint for the second time this Tour, ahead of Jasper Philipsen and Nacer Bouhanni. Mathieu van der Poel kept the yellow jersey. 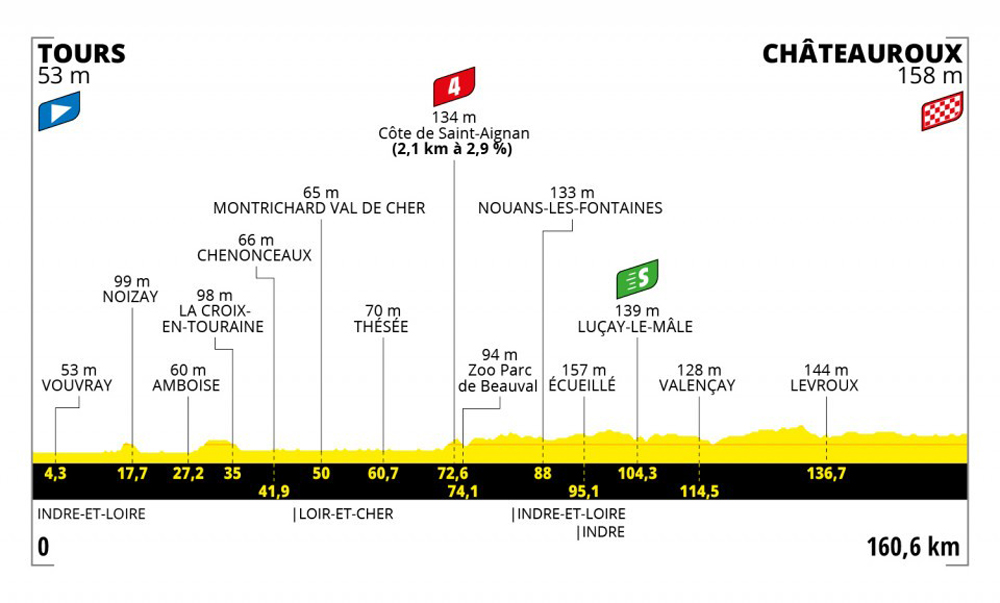 Tour boss Christian Prudhomme describes stage 6: “A brief stage in two parts. A touch of sweetness and wonder first going by the splendid Renaissance castles, incomparable gems of the Val de Loire heritage. Power then when the teams protecting the interests of their sprinters will increase the pace to reach the finish.” 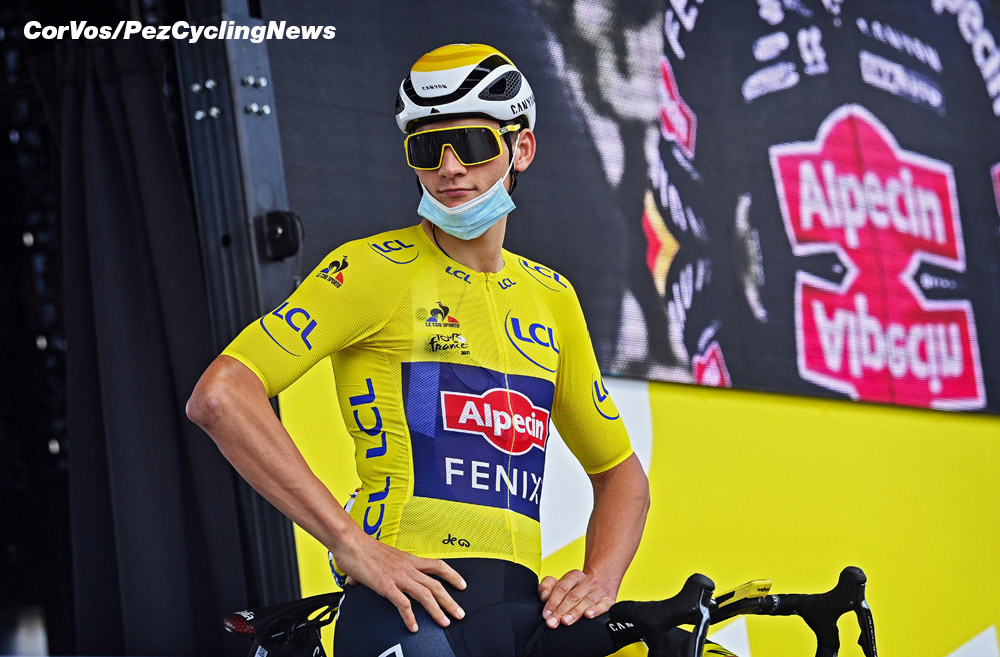 Another day in yellow for Mathieu van der Poel 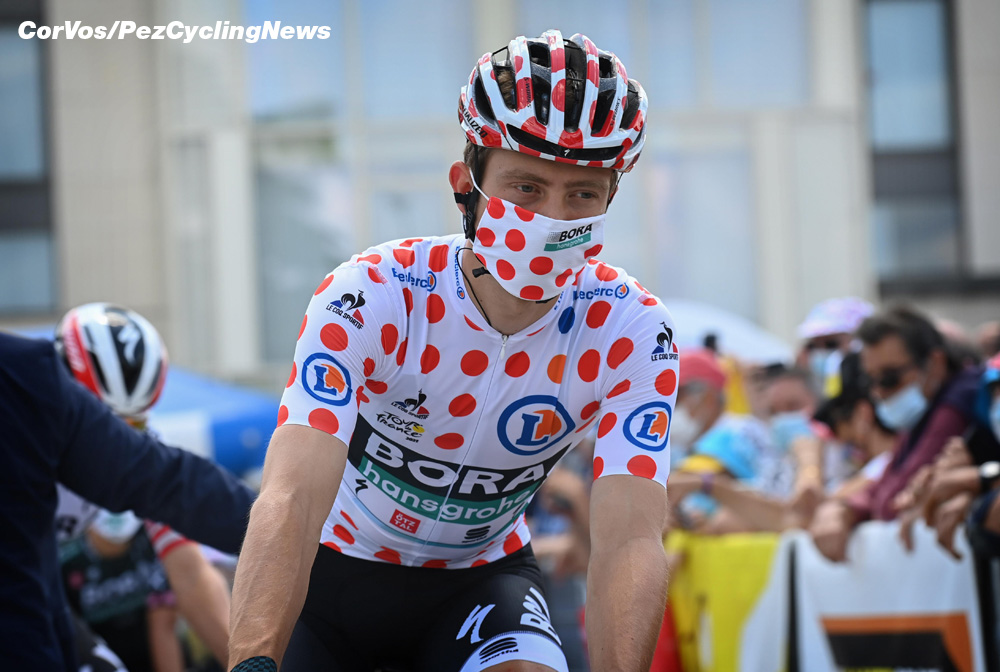 KOM Ide Schelling (BORA-hansgrohe) held his jersey for another day

After Tadej Pogačar’s top ride in Wednesday’s time trial, another probable sprint stage was on the menu for Thursday. The sixth stage ran over flat roads from Tours to Châteauroux, where we could expect another bunch sprint after 160 kilometres. Châteauroux is also the place where Mark Cavendish managed to take his very first stage victory in the Tour de France in 2008. The Briton, who was the stage winner in Fougères on Tuesday, could follow in his own footsteps today. 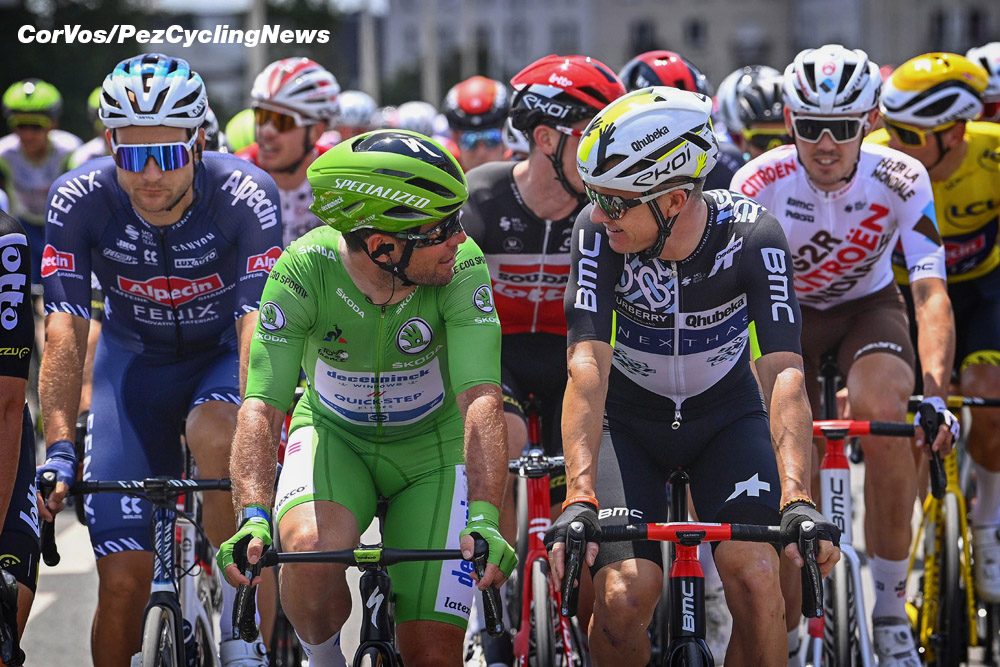 In dry and sunny conditions, the riders got going for a stage through the Loire Valley. In a flat sprinter stage, the first escape attempt is often the right one, but that was certainly not the case today. A first attempt by the AG2R Citroën pair of Oliver Naesen and Dorian Godon and Lotto Soudal riders Jasper De Buyst and Tosh Van der Sande was nipped in the bud early by the men of Deceuninck – Quick-Step. 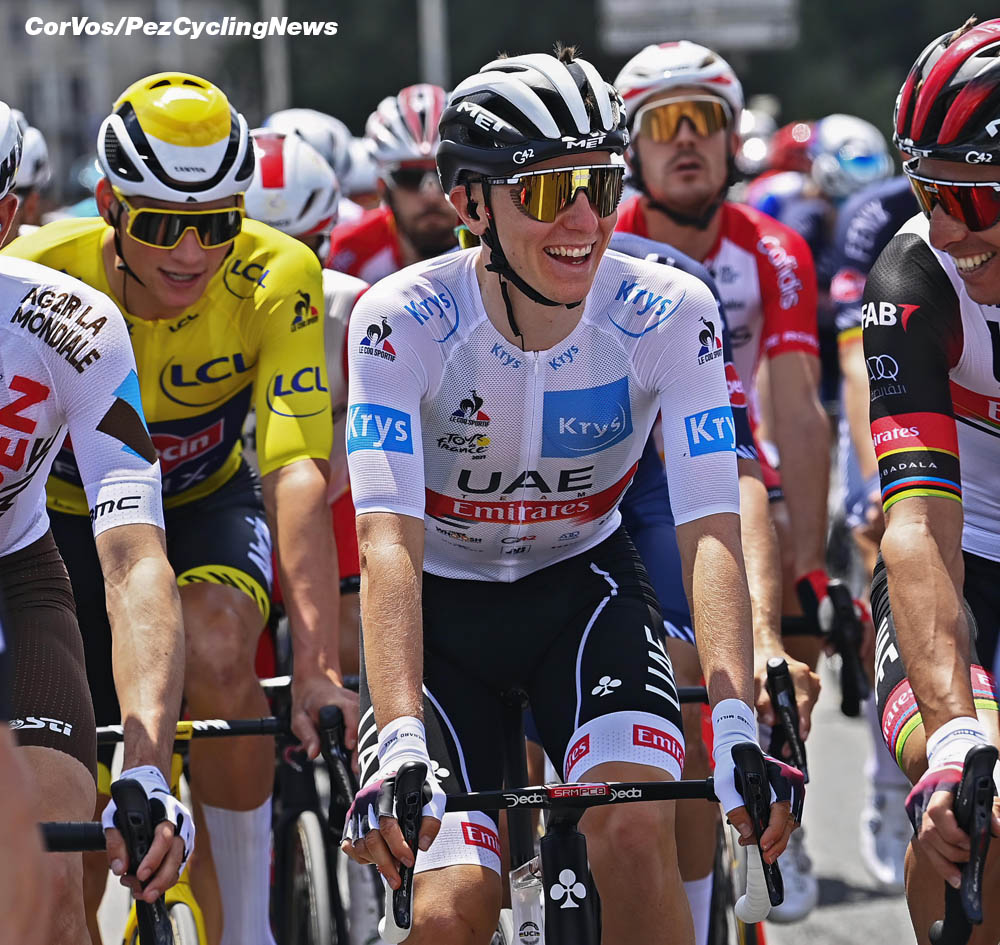 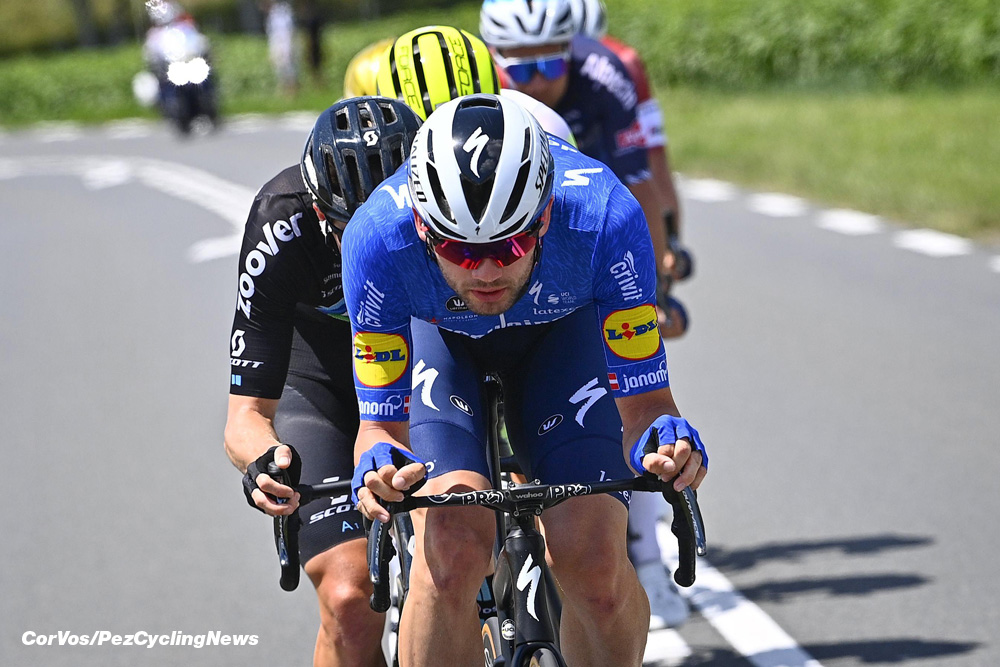 It was up to the men of Groupama-FDJ (for Arnaud Démare), Arkéa-Samsic (Nacer Bouhanni) and also Qhubeka-NextHash to bridge the gap with the eight leaders. The Danish rider, Asgreen (11th overall at 1:49) was the best placed rider in the leading group, but the yellow jersey wearer was not worried given the presence of Rickaert in the leading group. In the meantime, there had been no cooperation in the front group for a long time. 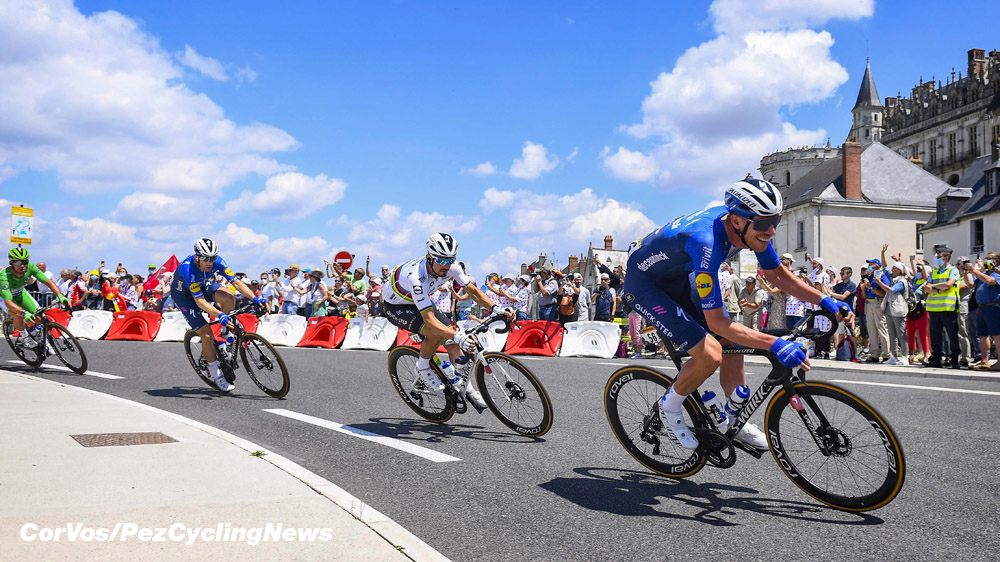 Rickaert was not going to continue riding with Asgreen, as the Dane was a danger for the yellow jersey. The other escapees also started to look at each other more and more, so that the lead dwindled to just 20 seconds. After a good 30 kilometres of racing, most of the attackers were caught again after a new acceleration in the peloton. However, Van Avermaet had no intention of letting himself be caught and rode alone from the large group. 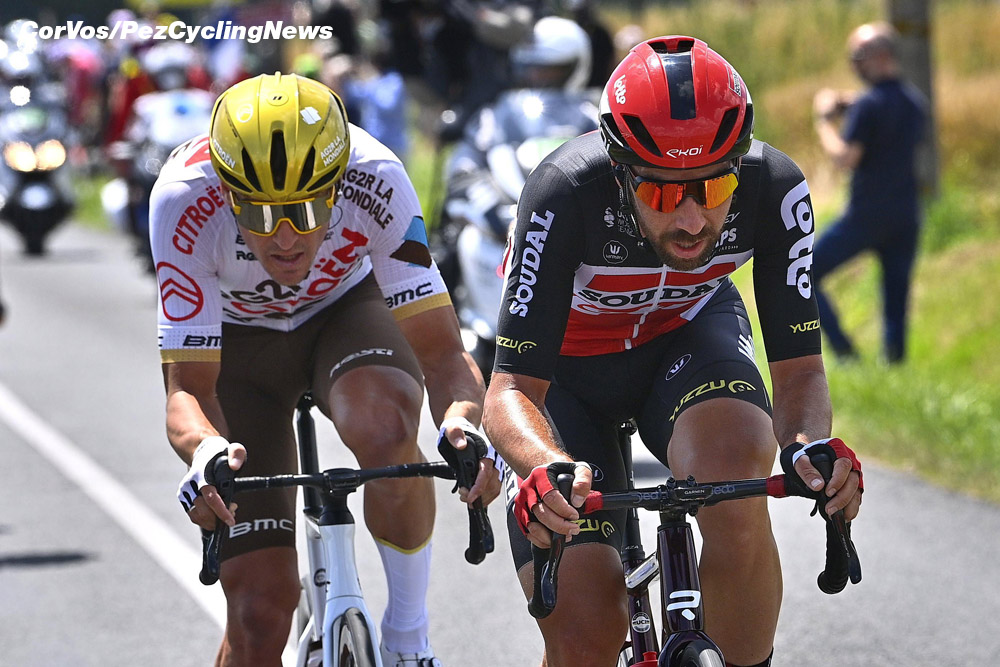 With Van Avermaet as the only leader, calm returned to the peloton. The experienced Belgian quickly rode away for 2 minutes and after a while was joined by counter attacker Roger Kluge. It was now up to these two to lead the rest of the stage, as the sprinter’s teams were calmly controlling in the peloton. Meanwhile, Van Avermaet took the only mountain point of the day at the top of the Côte de Saint-Aignan (2.1km at 2.9%). 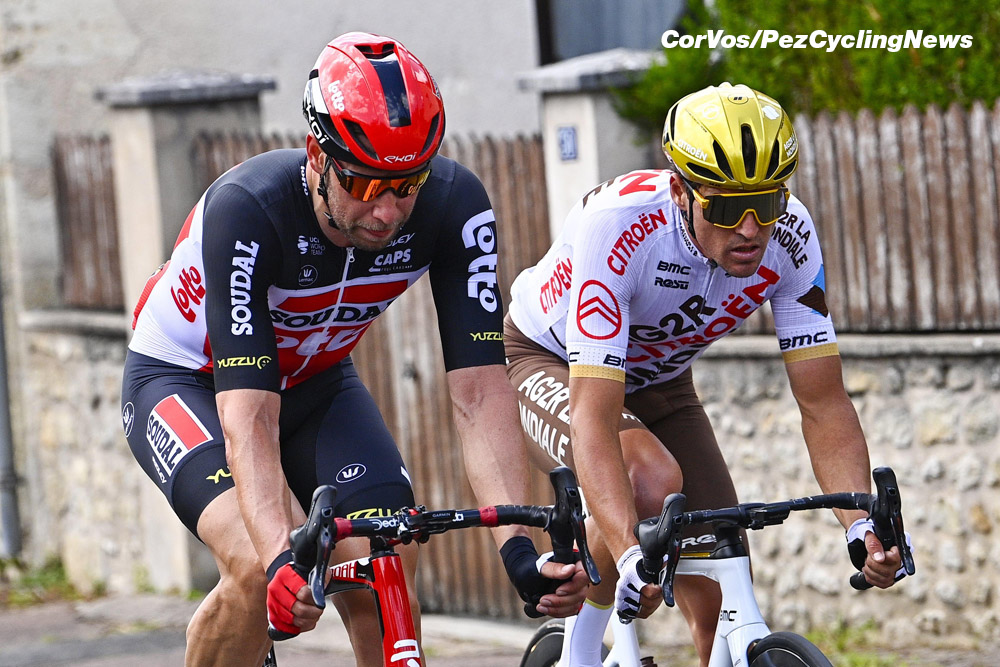 At 56 kilometres from the finish, the only intermediate sprint was in Luçay-le-Mâle. Van Avermaet was first, with Kluge on his wheel. In the peloton the fast men shot forward for the remaining points. In the end it was Sonny Colbrelli who won the sprint for the remaining 15 points, ahead of Michael Mørkøv (for green jersey wearer Cavendish) and Jasper Philipsen. The lead of the two escapees had meanwhile been reduced to just over 1 minute. 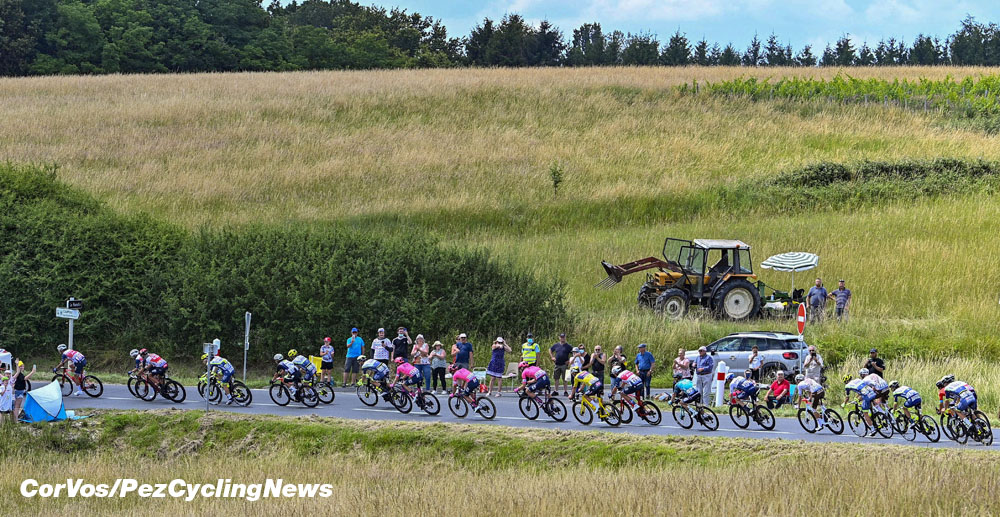 The peloton was quite calm coming into the final 20 kilometres

Van Avermaet and Kluge clearly had something left and so the peloton had to chase again to catch the two escapees in time. With just 8 kilometres to go, the difference was still half a minute, but this turned out not to be enough to actually surprise the sprinter’s teams. At just 3 kilometres from the finish, everything was coming together and we could look forward to a sprint between the fast men of the peloton. 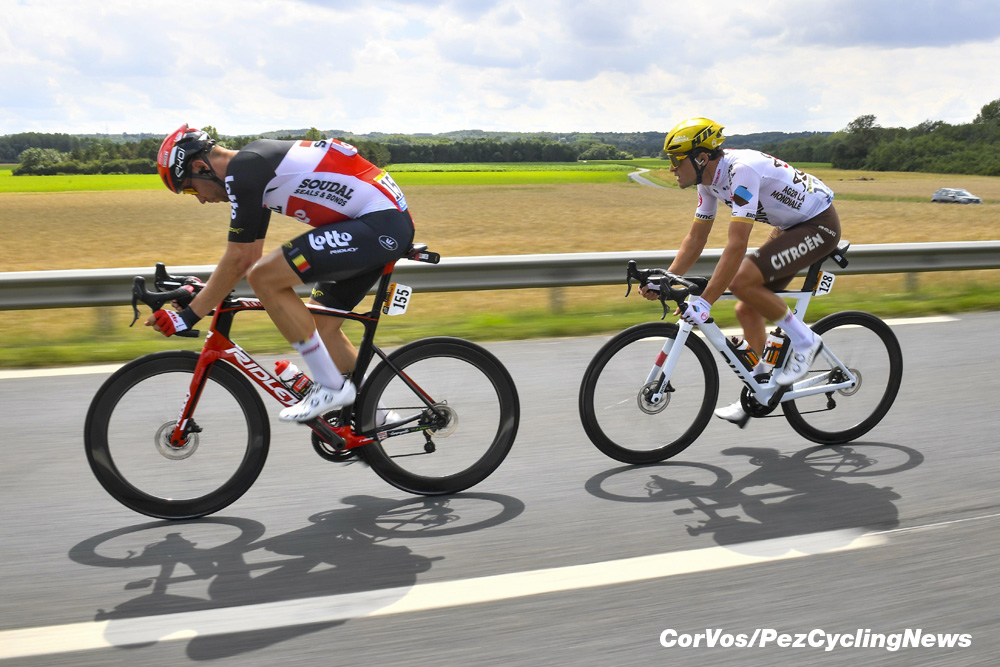 The break was never going to stay away

In the closing kilometres, Deceuninck – Quick-Step tried to set-up the perfect lead-out for Cavendish, but no sprint train could really take the control in the twisty and treacherous finalé at Châteauroux. Under the red flag the men of Alpecin-Fenix, with yellow jersey wearer Van der Poel as top sprint pilot, take the lead. The Belgian team came at the right time and then it was up to Tim Merlier to take Philipsen to the line as well as possible. 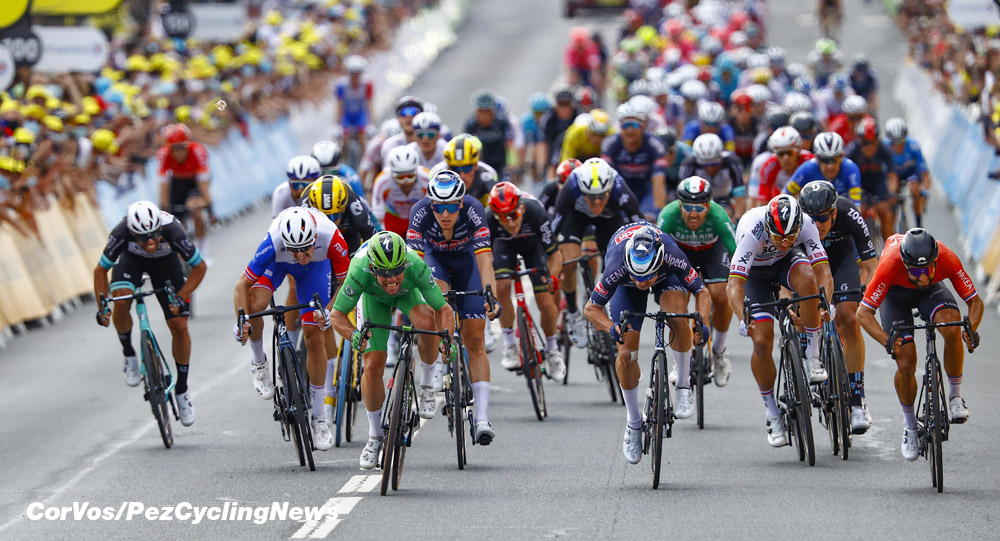 However, Philipsen was passed in the last metres by Cavendish, who managed to beat the Belgian and Nacer Bouhanni in his green jersey. For the 36-year-old Cavendish this is his third Tour victory in Châteauroux and his 32nd stage victory since his first in 2008. 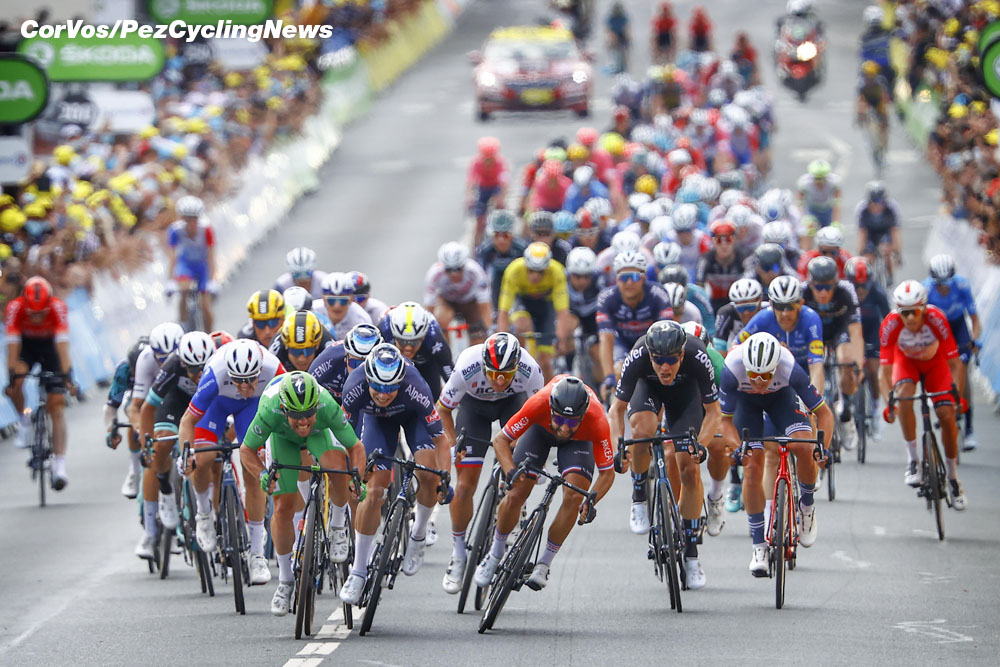 Stage winner and points leader, Mark Cavendish (Deceuninck – Quick-Step): “That was nice. It’s been 10 years since I last won here, and it’s pretty special to do it again. I won today in pretty similar fashion to what I did years ago, and it was indeed very helpful to know the home straight. We spoke at the team meeting about how there were so many fast speed trains, concluding it was going to be hard to lead out the sprint. Alpecin-Fenix was indeed the strongest sprint train today. On the final kilometre, Michael [Mørkøv] let me open the right side of the road so I could get on their wheel. The green jersey is not a clear objective. It has changed so much since I won it, with the intermediate sprints awarding so many points, which might play in my favour. Eddy Merckx’s stage wins record? Don’t even say the name! [laughs] I’m not thinking of anything. I just want to win stages on this Tour de France. If I’m good enough to win 50 stages more, nice. If this is my last one, so be it.” 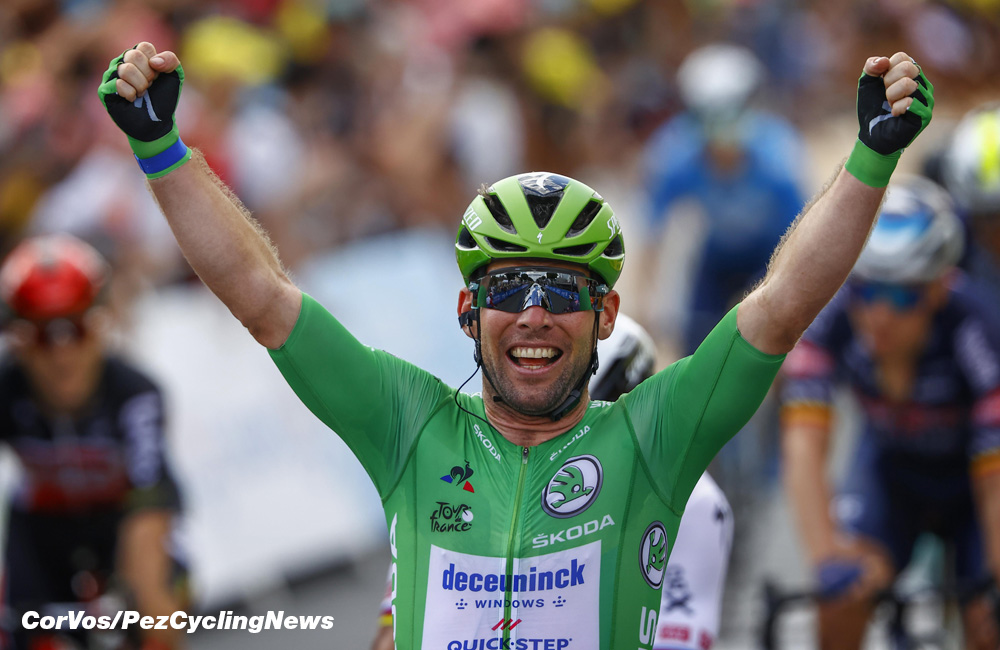 Overall leader, Mathieu van der Poel (Alpecin-Fenix): “It was a tough start, as a dangerous group rode away. After taking in this group, it all went ‘OK’ towards the finish. In the final I did what I could, but we lost each other just before the last corner. I had to wait a while and then we rode back to the front. We then managed to set up a good lead-out, but Cavendish is currently the best sprinter. Tomorrow’s stage? It will be a tough day. Some riders will no doubt try something for the standings. We’ll see tomorrow. It’s nice to keep the yellow jersey and we’ll be back at it tomorrow.” 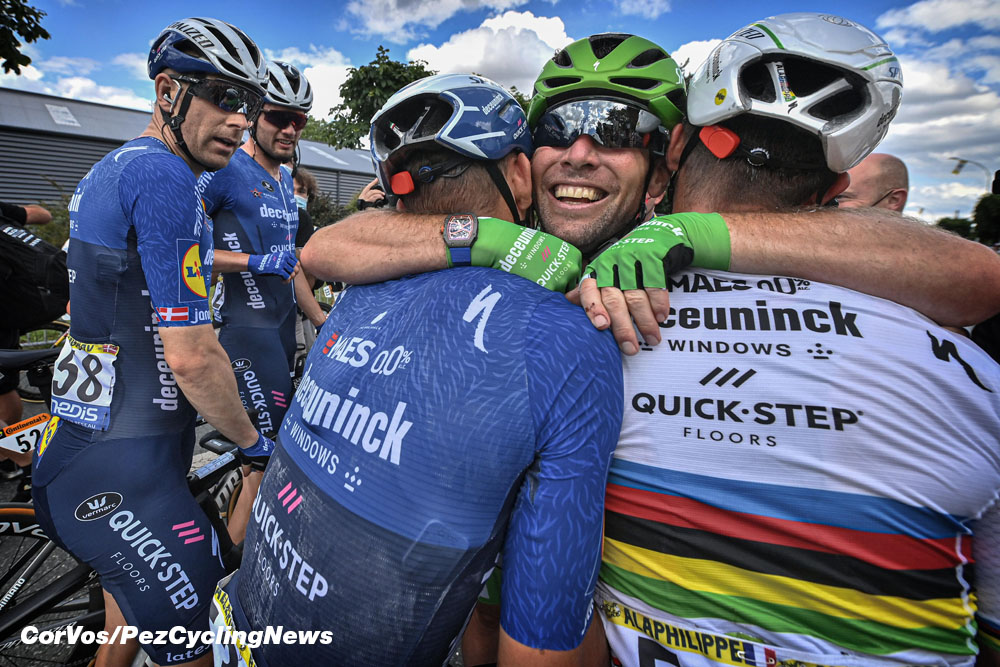 Patrick Lefevere’s boys do it again.