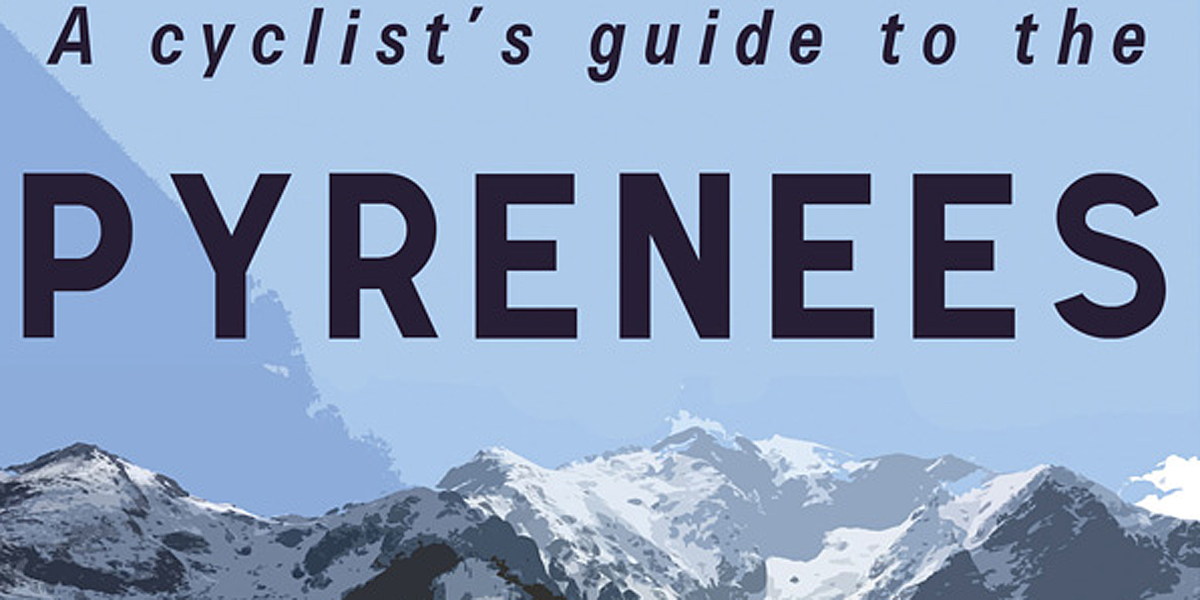 Wilder and woolier than the Alps, the Pyrenees have often served as a dramatic battlefield for the Tour de France and, starting on July 10, the final week of the 2021 edition will see five stages in these mountains spread across France and Andorra. For cycling enthusiasts unafraid of climbing, the Pyrenees experience is a must-do, and a new book by Peter Cossins provides an insider’s look at some great riding. 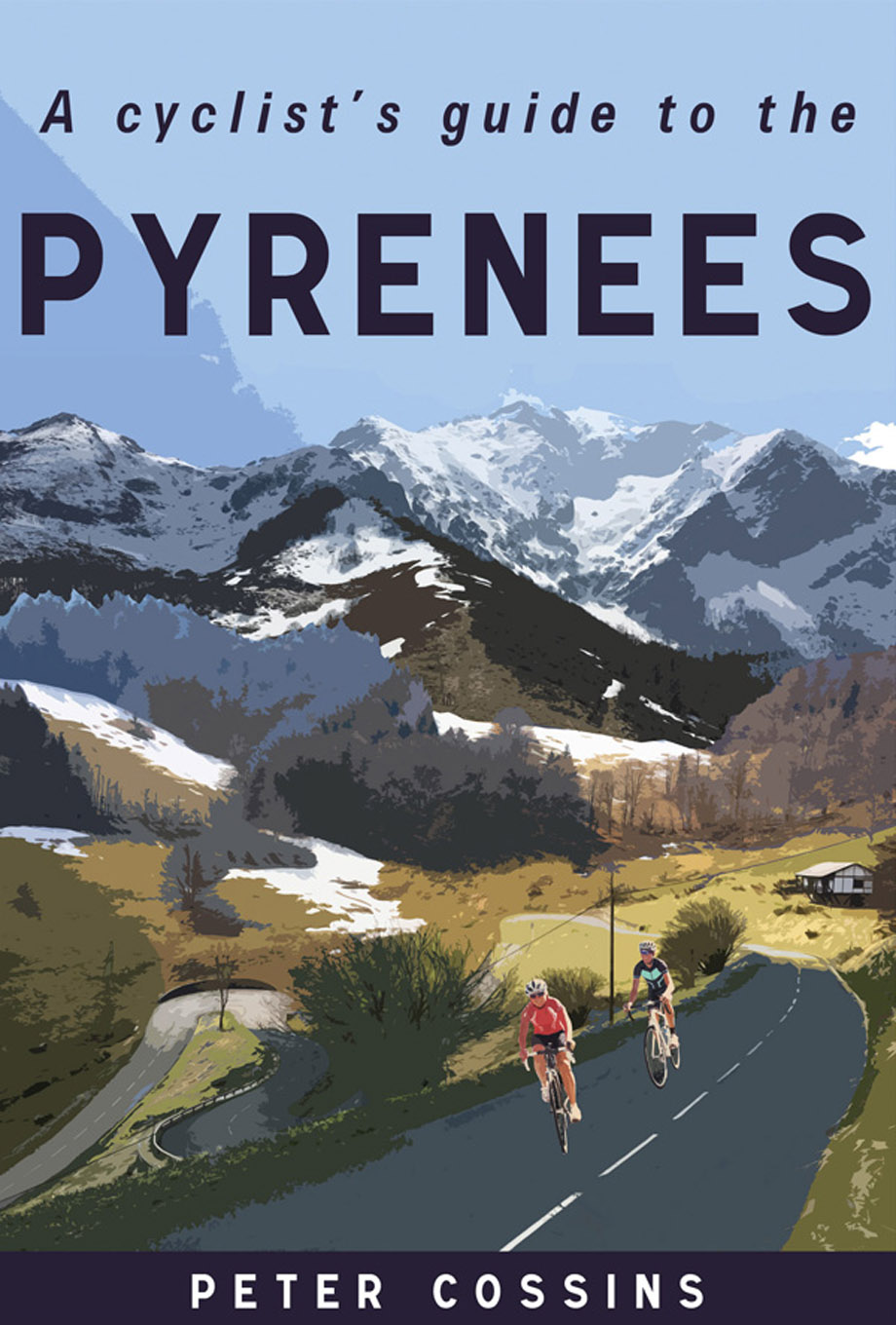 We have of course looked at the famous climbs of the Pyrenees here before, both through historical accounts but also via Graeme Fife’s superb 2008 Rapha book. It seems that the Alps have generally received more written attention than this chain of mountains, which lack the snow-covered peaks and concrete-heavy buildings of ski resorts to the east. Nonetheless, those of us who have ridden in the Pyrenees can look back at a first-class region for cycling. Challenging climbs take the riders through woodlands and up to bare rock summits on roads with only the occasional car or farm vehicle. Wolves have been reintroduced—there is even a monument erected by angry sheep owners to lost members of their flocks! 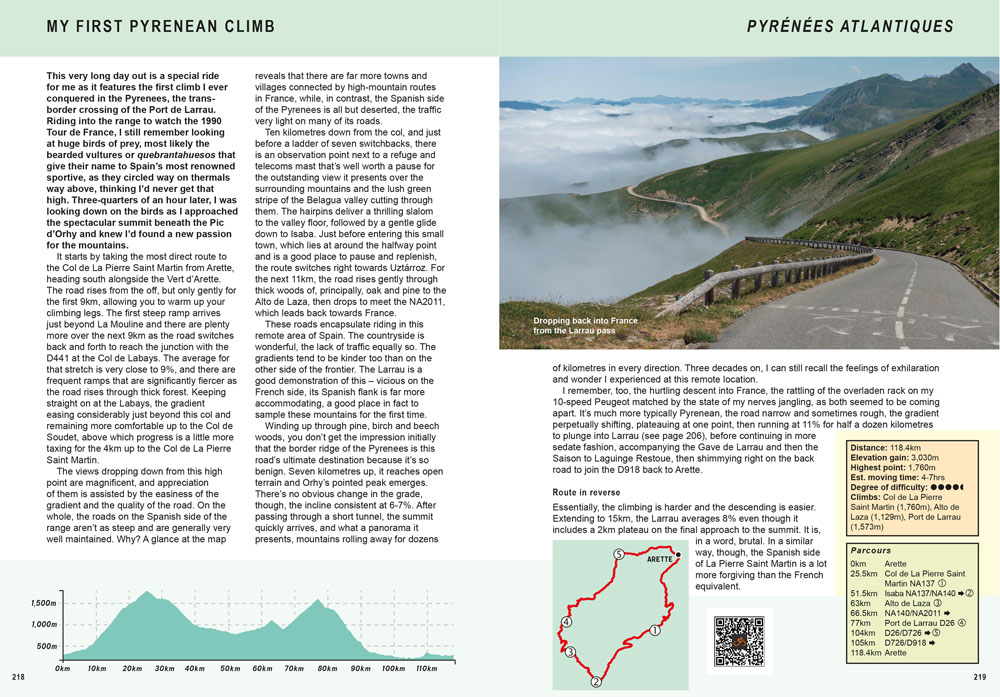 “A Cyclist’s Guide to the Pyrenees,” is, as its name promises, a practical guidebook for those interested in enjoying some of these roads less taken. British author Peter Cossins has cycled in the area for three decades, beginning in 1990 when, on his 10-speed Peugeot, he joined a friend to watch a mountain stage of the Tour, and eventually relocating to the French Pyrenees in 2016 with his family. While he discovered that there is in fact considerable information about the most famous Pyrenees passes in print and online, he notes in the introduction that there was:

“…very little about the terrain around them and about other climbs that might be just as challenging or beautiful, but often get missed because they don’t ever feature on the Tour route. At the same, during my own sorties I was reminded again and again that as much pleasure can be gained from climbing a pass in the Pyrenean foothills that may only be a few hundred metres high but presents a startling perspective on the snow-capped main ridge as from topping a high pass that’s a regular tour fixture.” 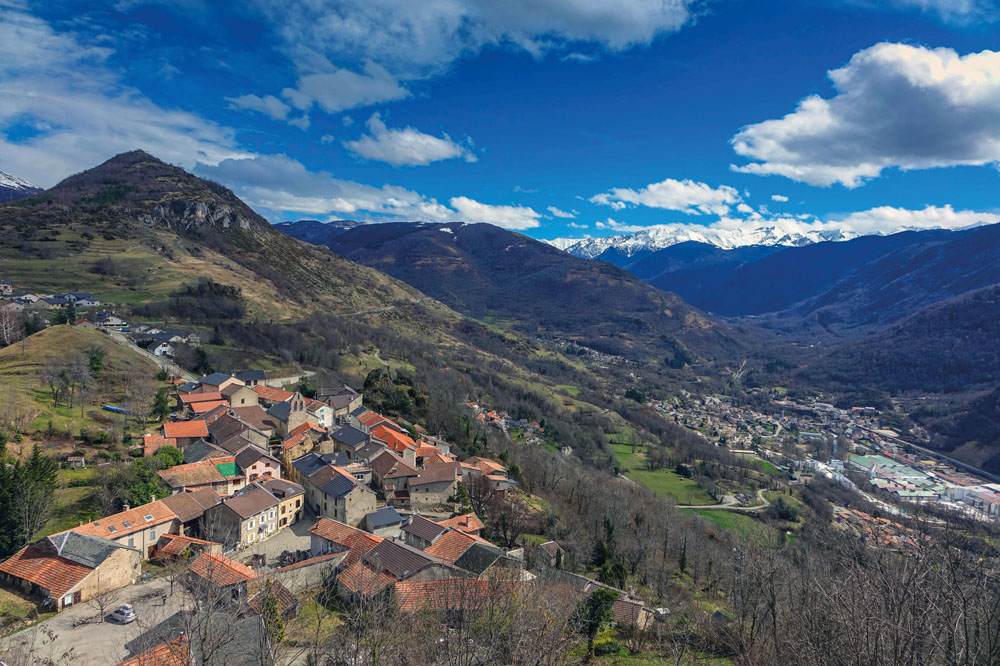 Packed into some 240 pages with fairly small print and the author’s excellent photos, this is has to be considered the most comprehensive guidebook available in the English language. It is arranged from east to west along the mountain chain, moving from the land of the Cathars in France to Spain, back to France and on to Andorra, returning to Spain and France and ultimately to the Atlantic. The variety available to cyclists in this 430 km long range (130 km wide) is impressive and the author has mapped out routes that run from 50 to 200 kms, with a focus on circular routes so that logistics are kept manageable plus one has the ability to start and finish anywhere one pleases. Mr. Cossins even offers suggestions on the benefits or disadvantages of riding a course in reverse so that in the end there are more than 200 possible routes here! 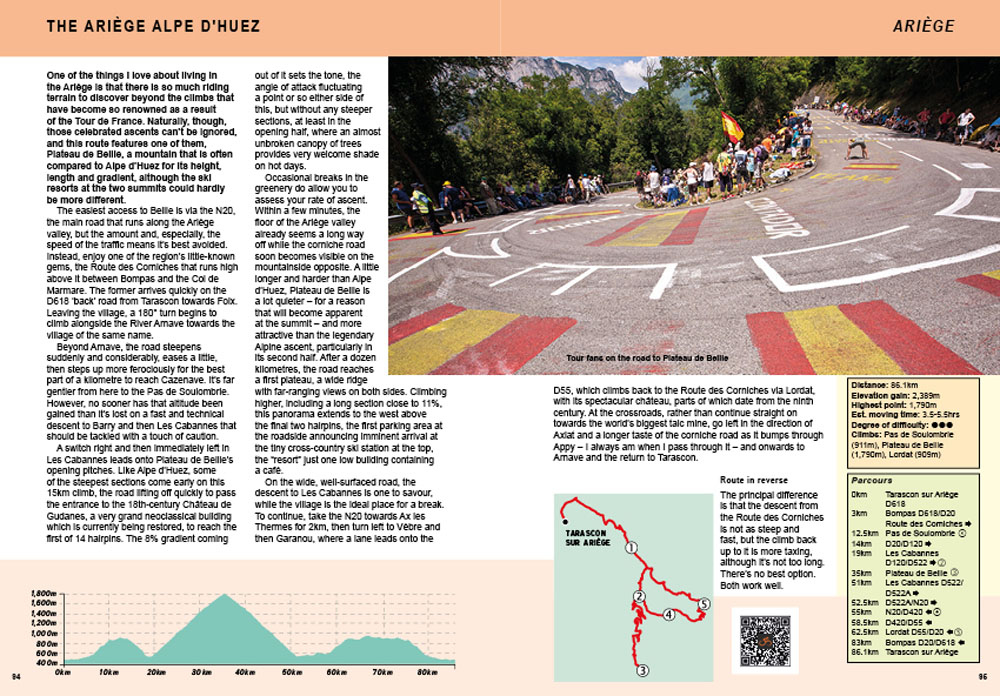 Each route is spread over two pages, with a profile, a map and a nice photo heading. There is a box with the data we all need/love, including distance, elevation gained, degree of difficulty, and the particular climbs encountered, and another that is basically a cue sheet. Living as we do in the modern information age, there is also a QR square for each of the rides for downloading. Even better, the author has a website, https://www.roadscolspasses.com/, that allows you to download a .gpx file of each of the rides for transferring to a navigation device.

The author notes that he has left out information on practical matters such as hotels and restaurants as this information is quickly dated but he does plan to set up a forum on the website where such details can be posted by those who have ridden a route and can (or can’t!) make a recommendation. 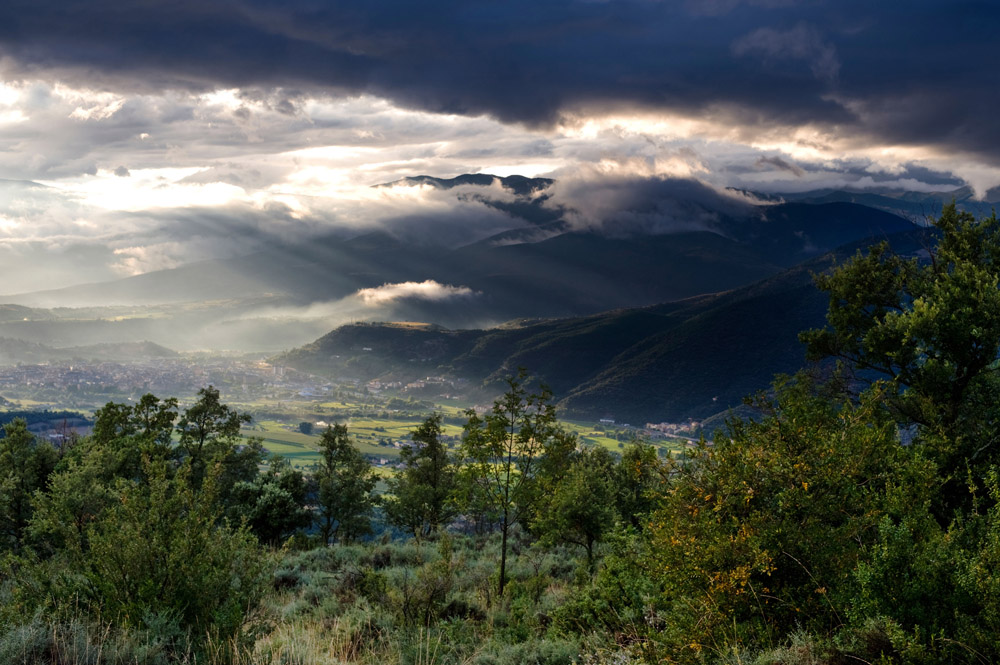 View from the village of Ortedo towards the town of La Seu d’Urgell, in the Pyrenees of Catalonia, Spain, after a thunderstorm

Each of the sections covering a route begins with a paragraph in bold print offering a short summary of what the ride is all about. For example, the “Tour de Mont Louis” section begins: “The profile of this ride is unusual, boiling down essentially to a 20 km descent off the edge of the Cerdagne high plateau followed by a 25 km climb back up to it. It begins in Mont Louis, a little town dominated by its fortress that was designed in the 17th century by Sébastien le Prestre de Vauban, Louis XIV’s chief military engineer, as bulwark against invaders from Spain.” There are some additional facts (“Mont Louis boasts the world’s first solar furnace”) before getting into the actual directions for the ride. 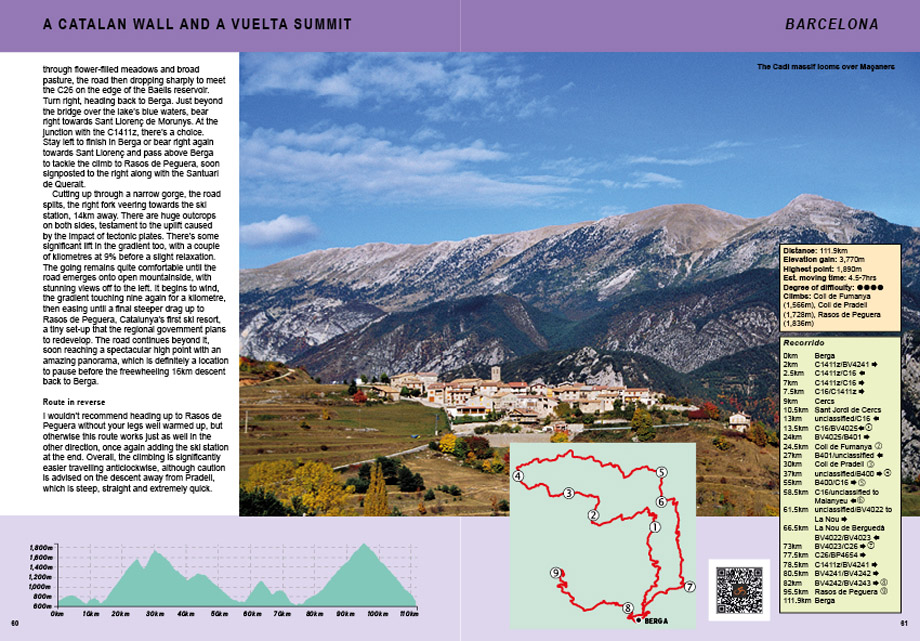 Considering that we are only looking at a two-page spread for each ride, there is a remarkable amount of local colour included, with comments on history, geography, geology, along with the author’s personal recollections of riding the segment. The book concludes with suggestions on riding the famous Raid Pyrénéen, the end-to-end route conceived in 1912 but not officially ridden until 1950. The rules call for a 720 km randonneur ride, crossing 18 cols with 11,000m of vertical gain, to be completed in 100 hours. More than 10,000 cyclists have managed this impressive feat, receiving a medal and certificate from the Cyclo Club Béarnais in Pau, which has set the regulations. There is a “Touriste” route as well which the author recommends as the roads of the original route are less conducive to cycling as the decades have passed. 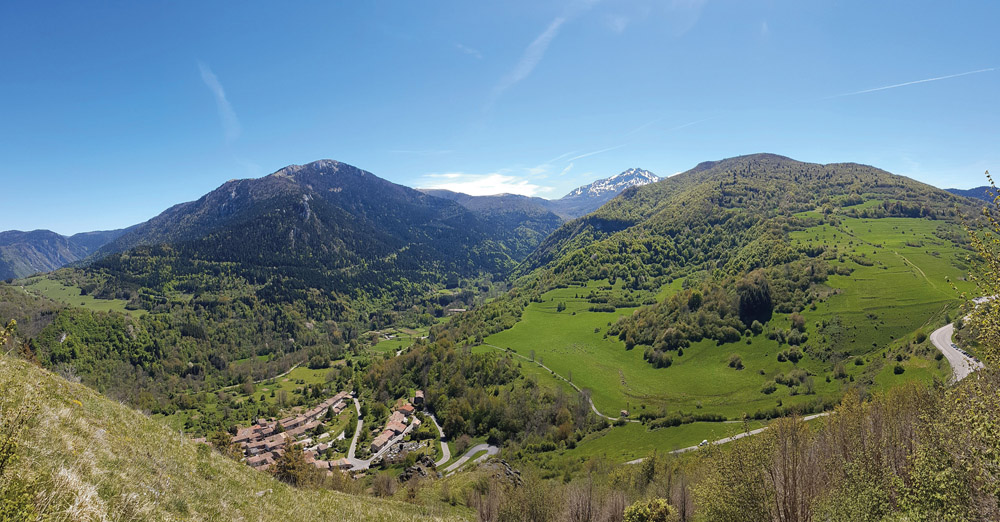 Vicinity of Montsegur in the foothills of Pyrenees

In my own cycling scrapbook there are a pair of articles from “The Toronto Star” dated in late 1981 about two local cyclists, Mike Brown and Mike Barry, (of Mariposa bicycle fame) who completed the ride that September. I had never heard of anything like the Raid and was fascinated to learn what fit people could do on good bikes. (Incidentally, the budget in 1981 for the duo was $2000 each for their custom bikes, plus $2000 for the trip expenses!). In 2002 I crossed the Pyrenees via the Roncesvalles Pass from France to Spain while cycling the Camino de Santiago but was to later spend two weeks of riding in the Pyrenees with friends in 2010, enjoying a handful of the superlative climbs described in the book. And it was then I learned, on the Col de Marie-Blanque that unlike the nice steady climbing in the Alps, these climbs offer surprising changes in gradient.

“A Cyclist’s Guide” is handsomely designed and exhaustively illustrated. My only quibble is that it would been nice to include an overall map of the region, with each of the areas covered in a discrete chapter indicated but this is just nit-picking as the effort put into this substantial book is admirable. 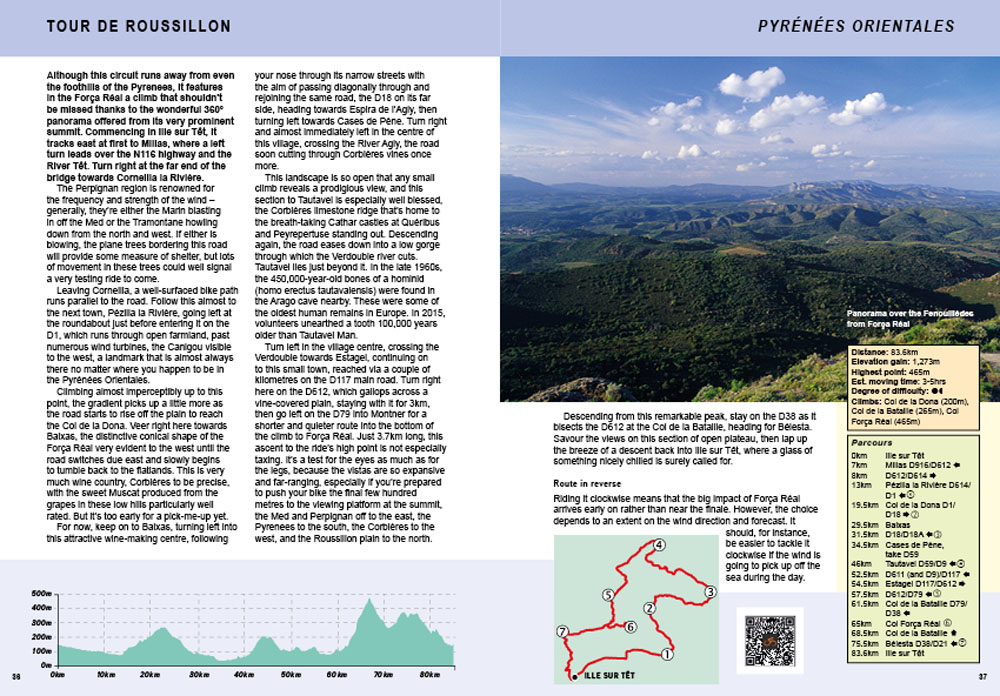 It would take some dedication to cover all 112 routes (224 of you want to do them again in reverse!), 300 climbs and 11,000 kms of riding but Peter Cossins has done that for us and reading “A Cyclist’s Guide to the Pyrenees” you can understand the attraction of this region. The book, and its associated website, seem to me to be absolutely indispensable for anyone wanting to explore the area on two wheels. 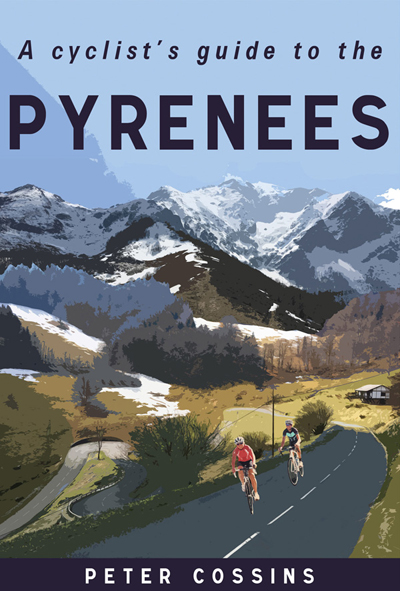