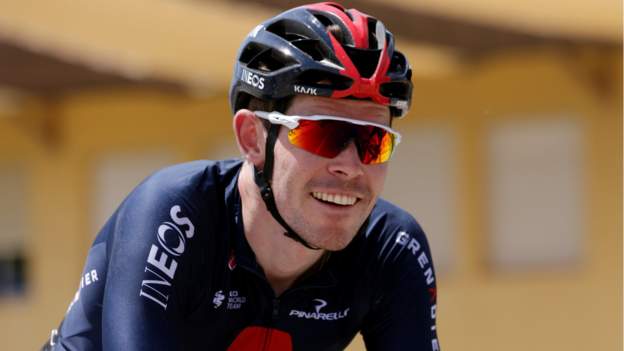 Luke Rowe is “gutted” to leave the Tour de France early after missing the time cut on a stage for the first time in his career.

The Ineos Grenadiers rider fell behind early in the day on arguably the toughest stage of this year’s race.

“The lights went out… like someone flicked the switch,” said Rowe before heading for the airport.

“It’s a brutal sport and that’s the reality of it sometimes.”

Rowe, 31, has ridden the Tour de France seven times since 2015, finishing on each occasion except 2019 when he was disqualified for a racing incident with Tony Martin.

This year’s edition of cycling’s most prestigious three-week race has been a disappointing one for its Welsh contingent.

Thomas started as one of the overall favourites, but slipped down the general classification (GC) after he was involved in a crash in which he dislocated his shoulder early on stage three.

Stage 11 of this year’s Tour featured two climbs of the iconic Mont Ventoux, but after setting the early pace for Richard Carapaz, now the Ineos Grenadiers’ sole overall race contender, Rowe fell behind on the Col de la Liguière less than 80km into the day’s 198.9km distance.

Sprinters including Mark Cavendish managed to reach the finish inside the day’s time limit – set at 15% of the winning time, meaning in this case that all riders had to complete the stage within around 47 minutes of Van Aert doing so.

But Rowe rolled over the line more than five minutes outside that cut-off.

“It was a solid start and there were a lot of attacks to go in the break,” Rowe explained.

“I felt like I was holding my own in those early stages. The plan from the outset was to try and take it on, and that’s the first time we’ve done that in this race, take it on to try and win the stage or move up in GC.

“We hit the early slopes of the first big categorized climb and it was literally like I hit the wall.

“The lights went out. It was like someone flicked the switch and guys who I would normally, I’m being perfectly honest, outclimb relatively easy were leaving me for dead, so it was over 100k to go and I was on my own.

“I never lost belief that I could arrive at the finish within the time limit but I missed it by five minutes or so, just gutting really.”

Carapaz finished sixth on the stage moving up to fourth overall, five minutes and 33 seconds behind race leader Tadej Pogacar.

“It’s tough and it’s the first time in my career I’ve missed the time cut and what a race to do it in,” added Rowe.

“It’s really hard just leaving the guys really, leaving it down to the seven boys.

“It’s tough but I think I’m leaving them in a good place.

“The tour is a long way from being over.”

Ineos Grenadiers did most of the work on the front of the group of favourites all day, with Thomas adopting domestique duties in service of Carapaz before sitting up for the closing stages.

The 2018 champion is now 48th overall, one hour 20 minutes and eight seconds behind Pogacar.